January 30, 2021 marks one year since the Director-General of the World Health Organization (WHO) declared the novel coronavirus outbreak a public health emergency of international concern. Since that declaration, Rhodium Group has been tracking how the pandemic has impacted economic activity in the highest greenhouse gas (GHG) emitting sectors of the world’s four largest emitters—the United States, the European Union, China, and India—and the degree to which their stimulus spending has been directed toward green measures that can reduce the GHG intensity of the recovery. In our September 2020 report, It’s Not Easy Being Green: Stimulus Spending in the World’s Major Economies, we provided a snapshot of the scale of green stimulus spending across these four major economies. In this report, we provide an update on green stimulus spending at the one-year milestone of the COVID-19 pandemic.

In our updated assessment, we find that only the EU has committed to green a meaningful share of its stimulus—15%. The US, India, and China have allocated a negligible share (around 1% or less) of COVID-specific spending toward green measures. Experience in the first full year of the pandemic reveals that relying on emergency measures alone is likely insufficient to adequately prioritize a green recovery. As in the EU, long-term climate policy frameworks and clean energy investment and innovation plans are critical to chart the course in times of crisis.

2020 has proven to be the worst global recession in the post-World War II period, with estimates of global GDP contraction of 3.5% (Figure 1). Unlike the Global Financial Crisis of 2008-2009—when global GDP dropped only 0.1%—every region of the world was hit by the pandemic and the resulting economic downturn. 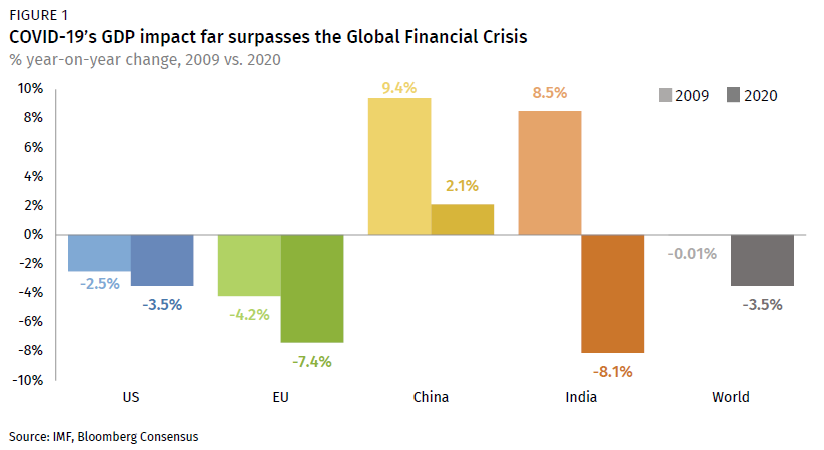 The economic hit to the US in 2020 was on par with the global economy, contracting 3.5% according to the most recent Bloomberg estimate. While significantly less drastic than the IMF’s April forecast of an 8% contraction, it goes well beyond the 2.5% contraction the US experienced during the Global Financial Crisis of 2009. With earlier and more extensive lockdowns, the EU experienced a 7.4% contraction in 2020, far surpassing the 2009 hit of 4.2%.

China and India weathered the Global Financial Crisis in 2009 largely unscathed, with GDP growth of 9.4% and 8.5%, respectively. But that luck did not hold in 2020. China managed to cling to positive territory, growing 2.1% according to the most recent estimates. India, as a result of one of the severest lockdowns among major economies, contracted by around 8%.

In response, countries invested heavily in government spending to jump-start growth. According to the IMF, global fiscal support reached nearly $14 trillion, with $7.8 trillion in additional spending and $6 trillion in equity injections, loans and guarantees. The approach to stimulus—both the form and scale—has varied significantly across economies. In advanced economies, higher deficits were driven both by increased spending and a drop in revenues, whereas emerging economies have spent less on average, with deficits stemming largely from a slump in revenues as economic activity declined.

In this report, we provide an overview of the discretionary stimulus measures taken by the world’s four largest emitters—which together make up two-thirds of global GDP and over 50% of global greenhouse gas (GHG) emissions. We also assess the extent to which these economies prioritized green, climate-related spending, which we define as any measure that supports energy efficiency, zero-emission energy generation or equipment (e.g., renewable energy investments, subsidies for electric or zero-emission vehicles) as well as infrastructure necessary for reaching long-term net-zero targets (e.g., transit and rail investments, EV charging infrastructure, and forest restoration).