China Has Problems, But Household Consumption Isn’t One

In August, China reported year-on-year retail sales growth of 13.4 percent, the highest this year. Monthly retail sales data is a useful proxy for the country’s household consumption, the Achilles’ heel of the economy many analysts believe is in urgent need of improvement if economic rebalancing is to be achieved.

Compared to other economies, China’s consumption as a share of GDP is surreally low: 36 percent in 2012, compared to the world average of 60 percent. Critics argue that such a low consumption ratio will threaten growth sustainability as soon as Beijing stops pumping cheap credit into heavy industrial projects and real estate. Therefore, after a brief upturn in the share of consumption in quarterly GDP numbers in the first quarter of 2013, a return to investment dominance in the second quarter triggered charges that reform must be stalling.

How do we reconcile strong August retail sales figures with the weak consumption story? Pessimists answer that such retail sales figures must be unreliable. But there is a simpler and clearer explanation for these patterns: investment is highly volatile, and makes consumption look larger or smaller depending on where it stands in its manic swings, but the real growth of consumption in hard money terms has been both very strong and very stable over time.

A quick look at the real annual growth of household consumption in a dozen major economies shows that China has outperformed in both the five- and 10-year periods. Most other nations have been sluggish by comparison.

From 2008 to 2012, China sustained real consumption growth averaging more than 9 percent, while India turned in 7 percent and Brazil less than 5 percent, data from the Economist Intelligence Unit and World Bank shows. More developed economies, including the United States and Japan, grew much slower, near the 1 percent mark. China is one of very few countries that saw faster consumption growth after the financial crisis than the average between 2003 and 2012. Developed economies and its closer peers in Asia almost unanimously suffered a slowdown. 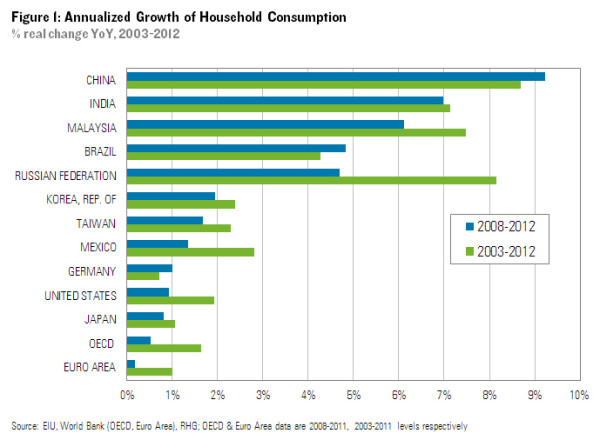 There is good reason to expect investment growth to slow in precisely this manner. Premier Li Keqiang describes such a strategy frequently. Shifting away from excessive investment is a central goal of new economic reforms slated for promulgation at the Communist Party’s upcoming economic summit in November. And despite month-to-month volatility in the data, the general pattern of economic restructuring – with a declining heavy industrial intensity per unit of GDP – is evident in recent years.

So the burden of economic adjustment is not on the shoulders of its households and consumers, though they are more than doing their part. The hard work of rebalancing that lies ahead belongs to the big boys of over-investment in overcapacity sectors. 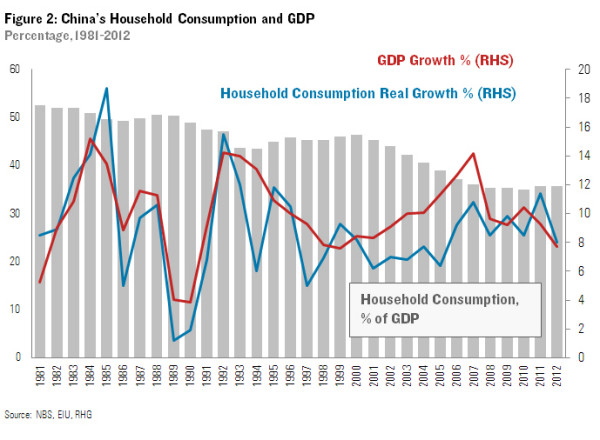