Last month, Beijing announced its boldest economic reforms in decades. Measures unveiled after the Third Plenum of the country’s Communist Party leadership are supposed to put the economy on a more sustainable growth path less reliant on domestic investment and manufacturing, with more emphasis on consumption and services. Most observers have focused on what these plans mean for the domestic economy. But there is a significant foreign dimension to the Plenum as well.

A major question is how the adjustments will affect China’s global investment position, in particular outbound foreign direct investment, which has just recently become a source of new-found positivity about China from Australia to Europe and the United States. Some observers worry that a new preoccupation with domestic reform and a general shift to quality rather than quantity growth will keep Chinese money bogged down at home, cutting off this new channel of international engagement before it had a chance to get going. 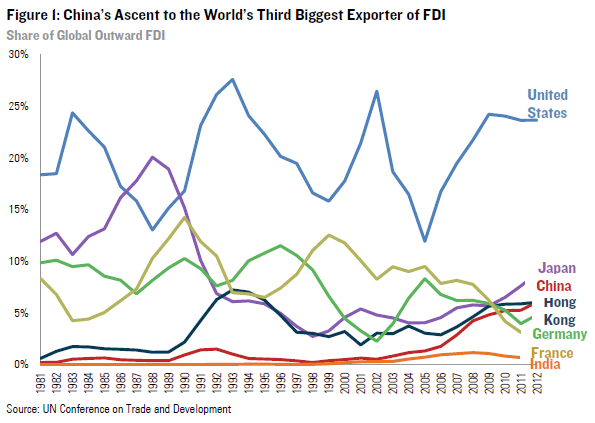 But while there is some risk of outbound investment volatility, Beijing’s reforms generally expand the rationale for Chinese firms to go global. The linchpin of President Xi Jinping’s new reform program is letting the market allocate resources, which will affect the pricing of almost everything China’s firms touch. With rising factor costs and a stronger yuan exchange rate vis-à-vis the dollar, Chinese firms must adjust their business models, moving up into higher value-added products and down the value chain to capture margins closer to consumers.

Going abroad is key to this adjustment. Offshoring low-value-added activities to other countries, acquiring brands and technological capabilities, and serving customers in overseas markets directly all require FDI. This will particularly boost investments in the services sector, as firms exporting higher-quality goods such as machinery or self-branded electronics necessitate greater on-the-ground presence, significant investments in brands and marketing, sophisticated distribution networks, and the provision of after-sales services.

A major motive for China Inc. to go abroad is, ironically, to strengthen competitiveness at home. Competition from abroad will only increase in the domestic market if the government improves conditions for private-sector firms and opens up new industries to foreign investment. State-owned firms operating in protected industries including telecommunications and financial services will have a particularly hard time modernizing their capabilities. Going abroad will allow them to acquire strategic assets, increase their access to experienced and talented staff, and learn the ropes of regulation in advanced economies.

Politically, the announced economic reforms will also make it easier for Chinese enterprises to invest overseas. Private-sector Chinese companies in particular currently face a complicated approval process for outbound investment, which often involves multiple bureaucratic entities with different interests and priorities. This process delays decisions, increases deal risk and puts Chinese firms at a disadvantage in competitive bidding processes. The reforms laid out in Beijing would eliminate some of these hurdles, leaving the decision of whether to make direct investments abroad more squarely in the hands of businesses, which would also allay foreign suspicions about political motives for overseas investments.

The macroeconomic elements of Beijing’s Big Bang initiative, including interest-rate and industrial-policy reforms, will also go a long way toward addressing foreign worries about the distortive impact of Chinese companies buying into their back yards.  Chinese firms are more likely to be accepted as “normal” players in global markets as a result of these new policies.

The new reforms do contain elements that could negatively affect overseas investment in some circumstances. First, capital discipline on state-owned enterprises imposed through higher dividend payments and market-driven interest rates may reduce their outward investment and create volatility, particularly for resource firms, which have been a big driver of China’s global investment footprint.

A second risk is that Beijing chokes back on openness generally out of fear of a major crisis on the road to rebalancing. Structural reforms are always risky and never present a smooth path, particularly when they involve financial sector opening and capital account liberalization. If conditions deteriorate, China may take steps to reverse the recent course of more openness to overseas investment to prevent large-scale outflows of capital.

But neither risk should be overstated. The stakes are arguably too high both for state-owned firms that will face new financial pressures at home and for officials anxious to spur continued growth for either party to back too far away from a greater acceptance of outbound investment.

The reforms announced at the Third Plenum are likely to bolster China’s outbound foreign direct investment stock, which we project to grow from the current $500 billion to $1-2 trillion by 2020. And the relationship between this investment and reforms also goes the other way:  Flexibility for Chinese firms to invest globally will be a major driver for reform and growth at home. After decades of interaction with the world through exports, Chinese firms now have increasing freedom to decide whether they want to invest at home or overseas. If China does not implement the announced reforms aggressively enough, Chinese firms may “vote with their feet” and take their money elsewhere.

A version of this article was published as Op-Ed in the Wall Street Journal.