Like the global financial crisis of 2008–10, the economic shock resulting from the COVID-19 pandemic has drastically reduced carbon emissions in advanced economies. The International Energy Agency (IEA) estimates that in Europe, where the most comprehensive lockdown measures have been implemented, total energy demand will drop by more than 11 percent in 2020, more than double the drop in energy demand in 2008–09. The question facing Europe is whether a recovery necessarily means a return to the status quo. There are, however, several reasons why the pandemic has not hurt the prospects for Europe’s Green Deal and may well end up boosting them.

Given how lockdowns and international border closures in Europe have dramatically reduced road transportation and cut supply chains in the carbon-intensive manufacturing sector, the decline in EU carbon emissions in 2020 might well exceed the IEA’s projected 11 percent reduction in energy demand.

The risk is that EU governments may revert to traditional and time-tested types of economic stimulus, focusing of cash-for-clunkers schemes to boost car sales, or other similarly carbon-intensive ways to boost short-term growth.

A factor suggesting that a Green Deal remains possible is that despite the dramatic decline in European energy demand and European fossil fuel prices, the price of carbon emissions in the EU Emissions Trading System (ETS) has remained relatively stable on average around €20/ton of CO2. By contrast, carbon prices fell in 2008 from €30/ton of CO2 to eventually just €5/ton of CO2.

The figure shows this trend: European carbon prices have now declined by less than 10 percent since the beginning of 2020. Oil prices declined 50 percent (but rising) and natural gas prices dropped nearly two-thirds in the same period. This stability in the price of carbon results from an EU political decision. Since 2018, EU policymakers have designed the ETS to operate with a de facto price floor, following the introduction of a Market Stability Reserve into which “excess” carbon emission credits are transferred annually. Such transfers reduce supply and put upward pressure on carbon prices. In May 2020, the European Commission announced, as expected, that 24 percent of available carbon emission allowances would be removed from the market for a year starting September 2020. 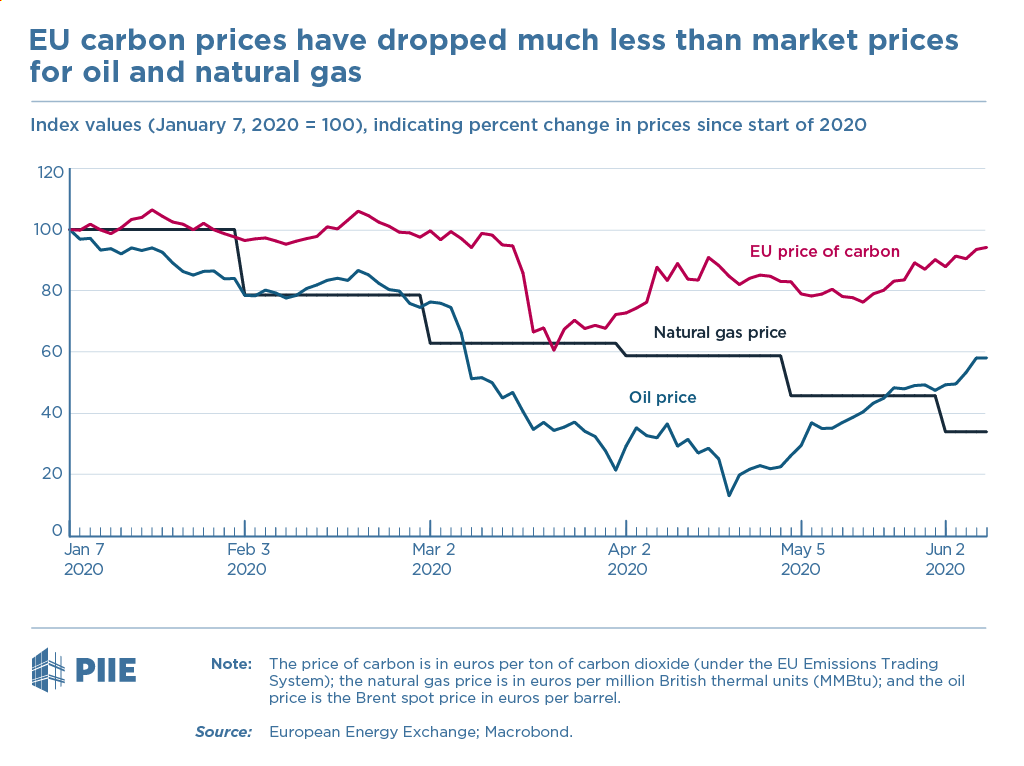 These incentives for private investors will, moreover, be expanded in the years to come, as ETS coverage is expected to be broadened from the current energy and heavily industrial sectors to also fully include the European aviation and maritime shipping sectors, among others.

Another factor derives from the shift of fiscal stimulus expenditures towards activities encouraging decarbonization. The most recent German stimulus package, for example, included no government cash incentives for buyers of traditional combustion engine cars,[1] a departure from the stimulus package in 2008. Instead, the cash incentive was doubled (from €3,000 to €6,000) on purchases of small electric vehicles costing €40,000 or less. Similarly, the German government has recently announced new regulations compelling all gasoline stations to also offer recharging facilities for electric vehicles.

The new commonly financed EU Pandemic Recovery Fund is certain to come under pressure to concentrate its grants on projects assisting Europe’s decarbonization goal. Without this focus, political support in many member states for pooling resources for common investments would evaporate.

In sum, COVID-19 will not derail Europe’s green agenda, potentially setting up yet another challenge for the United States to go green, regardless of who wins the US presidential election in November.

1. Combustion engine cars, though, will benefit from a general temporary reduction of three percentage points in the German value added tax (VAT).

© 2020 The Peterson Institute for International Economics