The European Central Bank’s first Household Finance and Consumption Survey (HFCS) for the euro area generated an unusual amount of attention and outrage earlier this month. Some controversy surrounded the timing of the release, which came after the German Bundesbank published part of the data in late March, at the time of the final negotiations of the Cypriot bailout. But it is easy to see in Figure 1 why the headline household net wealth figures in the survey provided tabloid fodder in an era of euro area bailouts. Germany, generally viewed as the richest country in Europe and the biggest resource for taxpayer bailout funds, in fact recorded the lowest median net household net wealth in the 15 euro area members for which data is available1 at just €51,400. This is less than half the euro area average median household net wealth at €109,200. 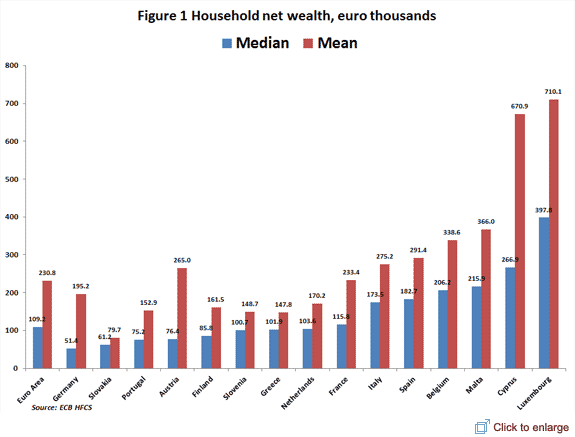 Superficially, therefore, poor German households seem to be bailing out richer members of the euro area.

Any result showing that Germans are poorer than Slovaks hardly passes the smell test. Note that in Figure 1, the average (rather than the median) household wealth in Germany at €195,200 is higher than it is in six other euro area members and close to the euro area average of €230,800. The large difference between median and mean ranking suggests that wealthy German households are wealthier than their counterparts in many other euro area countries. Still, the mean wealth position of German household remains surprising and a potential political issue.

But there is more to these survey results than their headlines. The ECB, first, should be applauded for filling a statistical gap by collecting the first large population dataset [PDF] (covering about 62,000 households) in a harmonized and cross-country comparable way. This accomplishment enables comparative analysis of euro area household assets, liabilities, and net wealth levels. Several caveats are in order, however.

First is the issue of when the data were gathered, and how much of a lag there was before it was published. This first wave of the survey occurred between the end of 2008 and the end of 2011, as Europe’s economy collapsed. It matters that the Greek data were collected in 2009 (before its crisis began in the spring of 2010), and that the Spanish data are from late 2008/early 2009, again before its economic crisis. With the exception of French data (from end-2009/early 2010), data from the 13 other reporting euro area members are all from 2010/2011.

Second, German household wealth levels more than 20 yeas after German reunification are affected by differences in wealth accumulation between East and West Germany. Figure 2 breaks the two out and compares them with the rest of the available euro area countries. 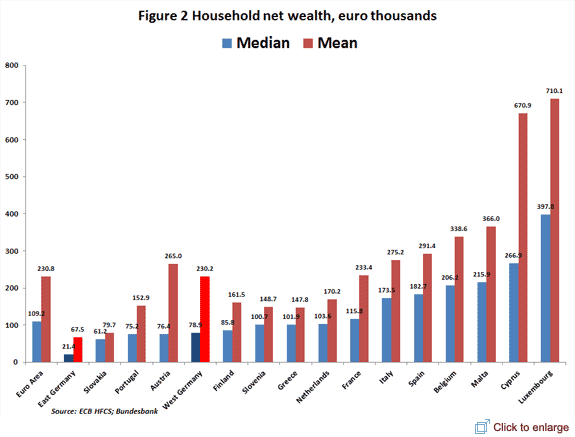 Third is the role played by home ownership, because a person’s main residence is usually his or her largest personal asset. Differences in home ownership are especially revealing in the HFCS survey. Figure 3 shows that Germany has the lowest home ownership ratio in the euro area. 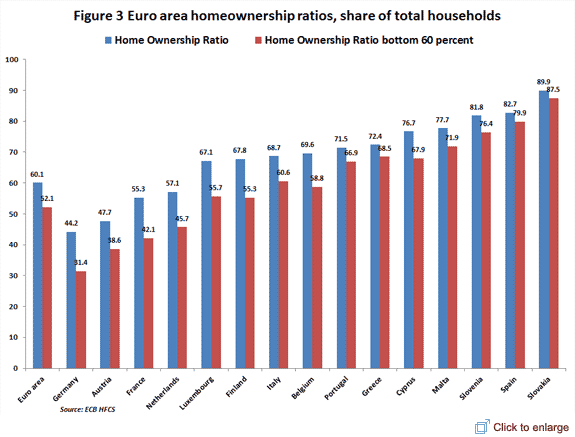 Only 44 percent of German households own (or partially own because of a mortgage) their main residence. The number drops to 31 percent in the lower 60 percent of the income scale. In many southern euro area countries, the same rate is above 70 percent (even though recent foreclosures in Spain and elsewhere will lower that level). Low German household net wealth levels can thus be explained by the absence of a main residence for many households.

Germany’s low home ownership, for example, rules out or minimizes housing wealth effects (and the associated consumption increases) in the German economy, especially because mortgage equity withdrawals are also not possible in Germany.3 Getting Germans to spend more because of the currently low interest rate environment will be difficult, because house price increases will not affect most households.

The flipside of low home ownership in Germany is that this phenomenon helps Germany’s focus on headline inflation, which usually matters more than core inflation numbers to renters, because rents are an important part of any customer price index (CPI) basket. Indeed, lower middle income swing voters are more likely to be renting their home than the already low German average.4 German politicians (and European central bankers in Frankfurt who need their political support) are thus forced to pay attention to headline inflation. Put another way, for all the talk about inflation of the 1920s, German elections are decided by renters who dislike inflation for contemporary reasons more than history! 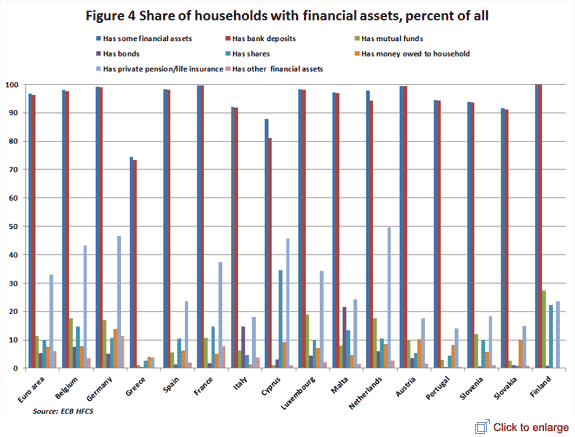 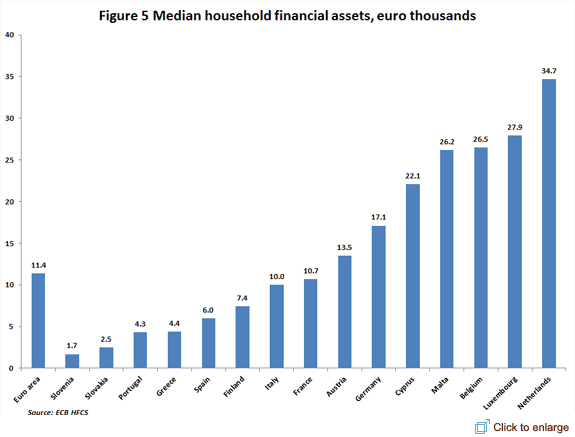 In conclusion, the new ECB household financial wealth and consumption survey contains enough new information to reinforce various viewpoints of pundits and politicians. But because some of the misleading data in Figure 1 might play a role, statistical nuances must be remembered. For this author, finally, the high levels of net household wealth across the euro area periphery underline the difficulty for any country seeking to leave the euro area. According to the HFCS, even the median Italian household has more than 173,000 reasons to want to stay in the euro at all costs.

1. No data are available for Ireland or Estonia.

4. See Bundesbank datatables 2.1 to 2.3 [PDF]. Higher income voters and rural voters in Germany, who are far more likely to own their own homes can generally be assumed to be safe votes for the German center-right. There is also a regional difference in Germany, as the home ownership ratio in former East Germany is just 34 percent, against 47 percent in the former West Germany.