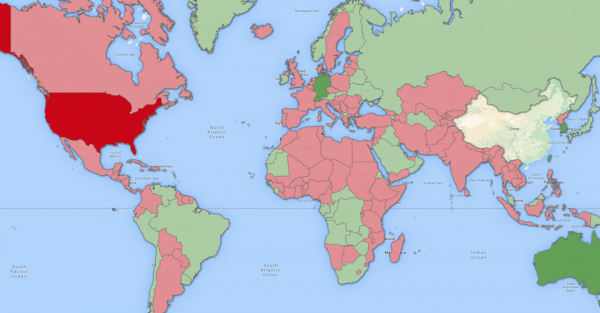 The story of China’s trade over the past half-decade or more has stayed relatively consistent: countries exporting commodities to China have seen enormous inflows of money as the country has consumed huge quantities of raw materials, while developed countries in Europe and North America have run persistent and politically contentious deficits as they consume the output of China’s factories. Over the past year and a half, however, this story has changed significantly. Commodity prices have fallen sharply, and China’s economy is slowing from its double digit growth. Many economies around the world are reeling as a result.

China’s trading partners have seen once dependable surpluses wither away, or already existing deficits grow to frustrating levels. This presents a starkly different picture than during the heyday of China’s global growth — where GDP growth rates topped 10 percent per year, versus below seven percent today. As China has entered deeper into a structural adjustment, with lower levels of investment and infrastructure growth, as well as lower energy intensity in economic activity, its trading partners have felt the squeeze.

Certain countries stand out. The United States has long had large deficits with China, and those have only gotten larger over the past year. Germany has seen its surplus shrink by more than a third as export of automobiles has fallen. And India, in the midst of advancing a bold economic program to support domestic manufacturing, has seen its deficit increase drastically. In China’s near periphery, Thailand is now running a deficit. Myanmar and Singapore have seen their deficits explode.

To be sure, there are many ways to evaluate trade relations, especially with the world’s largest exporter. It’s not necessarily counter to a country’s interests to have a trade deficit with China; neither is it necessarily beneficial to have a surplus. But there’s no question that the balance of trade affects each country’s domestic perception of China, as well as China’s bargaining power worldwide.