Despite the repeated warnings of commentators too numerous to mention, Europeans have declined to elect ultra-nationalist, anti-establishment majorities in their parliaments and hasten a repeat of 1930s era fascism or communism. This does not mean that the continent is without political problems as the next European elections approach, however. For reasons I will explain below, these elections, due next year, might provide an opportunity for certain forms of fear and anger-driven nationalism and extremism to make electoral gains they have not accomplished in national voting.

It is hardly surprising that so-called anti-establishment “populist” parties favoring redistributionist policies have made some gains with their opposition to austerity measures undertaken because of the economic crisis. Yet, political organizations like the True Finns Party, the Dutch Freedom Party, the Five Star Movement (M5S) in Italy, the National Front in France, or the UK Independence Party (UKIP) have not and will not achieve an electoral majority in national elections anytime soon. The reason is that the ageing and still-wealthy majorities of European populations are risk averse when it comes to taking their countries out of the euro area or the European Union.

As crises deepen, fear for the future has tended to replace anger as the dominant motivating factor among voters. As a supra-national entity, the European Union has offered voters an establishment alternative not found in non-European countries or during earlier economic crises. Established parties in Greece, Italy or elsewhere have thus been able to overcome their discredited records of corruption and mismanagement by linking themselves to Europe. 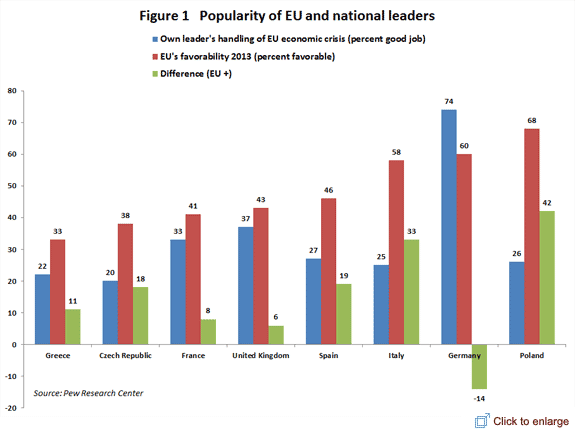 Figure 1 shows how in all polled countries – except for Germany, where Chancellor Angela Merkel personally is riding high in the polls – the European Union’s favorability rating is higher than the share of voters who rate their national leaders as having done a good job in handling the economic crisis. This is true even in the United Kingdom and in crisis stricken countries like Italy, Spain, and Greece. Similarly, support for the euro is actually up, according to Pew, in both Spain and Italy, and it is virtually unchanged in Greece.

In other words, while European voters are less happy with the European Union than they were before the crisis, they seem to prefer the distant devil they know in Brussels to the uncertainty of life without it. Anti-EU parties thus face a formidable hurdle in convincing majorities to change the status quo. This political reality may ironically keep the United Kingdom together, as Scottish nationalists will likely fail to make a convincing case for life outside Britain before the September 2014 referendum.

In the longer term, however, the decline in the favorability of the EU poses a problem and a challenge for advocates seeking approval in the referenda of a new and improved EU Treaty. Such referenda cannot be won based on the bureaucratic intricacies of a well-designed banking union or the capability of the European Stability Mechanism to recapitalize ailing banks. Only a new political vision for Europe, combined with the end of economic misery, will secure such renewed popular support. In other words, do not expect serious moves toward a treaty change for years to come. Instead, euro area governments will likely continue to try to fix their common currency through legal band-aids that do not require a treaty change. These efforts can likely continue until at least 2017, when France and Germany go to the polls again, by which time the economic cycle may have swung back to growth.

A separate potentially significant short-term political problem is fast approaching. In about a year, new elections for the European Parliament will be held across the European Union. In this voting, nationalism or extremism may surface for several reasons.

First, in the eyes of most voters, the European Parliament does not command as much relevance and esteem as national parliaments. Hence the fear-driven resistance to such populism could dissipate as voters let off some steam without consequence. Turnout in European Parliament elections is relatively low – only 43 percent in 2009 – giving extra power to those motivated by anger and protest. The toxic atmosphere surrounding the long economic downturn could play into the hands of various national populist parties that have been unsuccessful in national balloting. In France, for example, the weakness of the Socialist Party and President Francois Hollande, combined with the infighting within the center-right Union for a Popular Movement (UMP) party of former President Nicholas Sarkozy, might well hand a victory to the National Front (FN). The FN leader, Marine Le Pen, has deftly adopted British Prime Minister David Cameron’s strategy of proposing a referendum on the euro without explicitly campaigning against the common currency.

A similar situation exists in Italy, where economic weakness might linger next year, and a new national electoral law might be in the offing. In addition, former Prime Minister Silvio Berlusconi may be banned from public office, making a reconstitution of mainstream center-left and center-right parties likely. Bepe Grillo, the comedian turned politician who heads the Five Star Movement, might thrive in such an environment even while doing less well in national elections. The UKIP in the United Kingdom could similarly take advantage of the fact that the European Parliament elections are decided by proportional representation. (The UKIP has been handicapped in national elections by the difficulty of winning seats in first-past-the-pole contests.) Nigel Farage, the UKIP leader, is already a member of the European Parliament. In Greece, finally, the neo-Nazi and racist Golden Dawn might do well enough in the European parliamentary voting to see one or more of its members elected. How parliamentarians from other European countries would respond to the election of a representative of a genuinely neo-Nazi and often violent political party remains to be seen.

For all these reasons, the European parliament elected in 2014 might well contain more nationalists and populists than today. In theory, the European Union might resemble the political setup of Weimar Germany in 1932,1 when most democratically elected German MPs represented anti-democratic political movements like the Communist and Nazi parties. Ultimately, though, it seems unlikely that the European parliamentary elections next year would produce a negative majority of nationalist, anti-European MPs. More probable is a working majority retained by the traditional pan-European parties – the center-right European Peoples Party (EPP) and center-left Socialists and Democrats (S&D) – under pressure from the extremists and facing difficulty in running things smoothly. A much reduced EPP-S&D majority might make the centrist grand coalition vulnerable to defections on many parliamentary votes, making the European Union even more ungovernable than it is today.

Such difficulties would matter on important topics over which the European Parliament holds co-decision rights under the Lisbon Treaty. If, for example, the US-EU Transatlantic Trade and Investment Partnership (TTIP) negotiations are not completed in the next 12 months, a newly elected European Parliament might resist ratification of it. The same would of course be true with other trade agreements and regulations concerning the banking union.

An uncertain future could force the current EPP-S&D majority to work more closely together in the next parliamentary session, despite the intentions of some European politicians to compete fiercely in the next election. Faced with an anti-EU populist tide, attempts to establish pan-European center-right, center-left, liberal, or Green parties and have them compete continent-wide may have to be abandoned. Just as pan-Arabist parties have fared poorly since the Arab Spring of two years ago, so too would pan-European party lists face dismal electoral prospects in the current economic climate. Ironically, attempts to establish pan-European parties would probably hand victory to anti-European parties in 2014. The end result would reduce the opportunity for the European Parliament to alleviate the chronic democratic deficit in the European Union.

1. I am indebted to C. Randall Henning of American University, formerly of the Peterson Institute, for suggesting this comparison to me.