The Road to a European Banking Union: Part II

The EU (27) deal on banking resolution introduces a new and unprecedented degree of costs imposed on creditors (i.e., bail-ins) in European banking crises, while allowing for national government flexibility – a classic compromise between single centralized rules and national discretion. Guaranteed deposits under €100,000 are sacrosanct, illustrating the impact of the recent Cypriot debacle, which no European policymaker wishes to repeat. Invoking a distinction between guaranteed and nonguaranteed deposits over €100,000 that was ignored for a time in Cyprus, the ministers said [PDF] that “eligible deposits from natural persons and micro, small, and medium-sized enterprises, as well as liabilities to the European Investment Bank, would have preference over the claims of ordinary unsecured, non-preferred creditors and depositors from large corporations.” In other words, some large depositors will be more equal than others in the future, but all will rank higher than bond holders and shareholders.

Some bank liabilities are excluded from potential bail-in [PDF]:

In addition, national governments will retain the opportunity to exclude, or partially exclude, liabilities on a discretionary basis for several reasons:

These potentially far-reaching expectations may lead to sizable differences in how member states treat national bank failures. As a result, significant challenges face the creation of a new unified single resolution mechanism for banks in countries with different attitudes toward creditors in the event of a bank failure.

On the other hand, making bail-ins an integral part of the European bank resolution framework is a step forward. Europe now has creditor ranking that in principle looks like that of the Federal Deposit Insurance Corporation (FDIC) in the United States. And national flexibility concerning the use of government money to rescue banks will be restricted, so that bail-ins will increasingly be the new norm in Europe. Earlier this month, the European Commission’s Directorate General for Competition — which oversees the European Union’s state aid rules — announced that government bailouts of banks must include write-downs to zero for shareholders and junior bondholders starting later this summer. This the European Commission has already been restricting the ability of national governments to use public funds to bail out banks.

EU finance ministers have now further limited the ability of national governments to rely on public money in future bank rescues. Bank restructurings and recapitalizations are envisioned to be regulated in three stages.

Stage one: This stage would run until losses of 8 percent of a crisis-stricken bank’s total liabilities (including its own funds) are imposed on the institutions’s shareholders and creditors. Any flexibility is limited to exceptional cases and subject to strict conditions. Such creditor losses would be the first action taken in a bank resolution in Europe. Unlike the new state aid rules, depending on the losses in the bank and its capital structure, this requirement may compel national government to bail in senior uncovered bondholders.

Stage two: Should the first stage prove insufficient to recapitalize an institution, the second stage allows national governments more freedom to dictate their own terms for covering any additional financing needs to restructure a banking institution. With EU Commission approval, government could impose more losses on (senior) bank creditors, or use their own taxpayer funds or national resolution fund for an additional bailout of up to 5 percent of the bank’s total assets. They could also seek a government loan from the European Stability Mechanism (ESM) of up to 5 percent of the institution’s total assets, subject to additional political conditionality, as has been the case with the €100 billion Spanish ESM bank bailout since 2012.

These national funds could lend to each other in a crisis. But the decisions are a long way from a genuinely integrated European or euro area bank resolution and deposit insurance framework.

Finally, the European governments have created another important financial regulation acronym – MREL, or minimum required eligible liabilities. Appropriate MREL levels are designed to ensure that banking institutions in Europe have sufficient loss absorbing capacity. The goal is to avoid the Cypriot scenario, in which large haircuts on uninsured depositors were eventually required, as a result of a lack of loss-absorbing balance sheet capital ranked lower on the creditor ranking.

National resolution authorities plan to set minimum capital and MREL levels, based on the institution’s size, risk, and business model. By 2016, the European Commission and the European Banking Authority would have the opportunity to introduce harmonized MREL levels for all European banks. As is the case with national guarantee deposit schemes, nationally determined MREL levels are a far cry from a genuinely integrated European banking resolution framework. Indeed the new setup could lead to differences in regulatory capital requirements for loss-absorbing capital across the European Union. For example, fiscally constrained governments might demand higher levels of such capital — for example, junior unsecured bonds — than in countries with fewer fiscal constraints. The challenge is obvious for the ECB as the single bank supervisor for large banks.

Would it have made a difference if these new rules had been in place in September 2008? A back-of-the-envelope look at the failures of Bankia in Spain and Anglo-Irish Bank in Ireland — the two largest bank failures in Europe — is instructive and suggests yes. The precrisis balance sheet of the two banks and the cost of their eventual government bailouts are presented in Table 1. 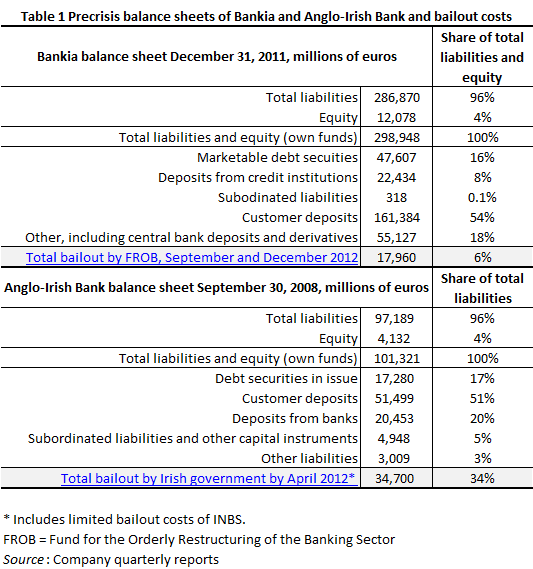 The situation in the two Cypriot banks is well-known. Their lack of subordinated liabilities and bank bonds necessitated large bail-ins of uninsured depositors. But Bankia’s situation before the crisis was different. Its marketable debt securities amounted to 16 percent of total liabilities and equity. The share of these bonds defined as exempt under the new bail-in rules cannot be gauged, though the aggregate number is larger than the 6 percent of total liabilities and equity value of the Spanish government bailout of Bankia.

In early 2013, before injecting capital into Bankia, the Spanish government did write down its share values to a nominal €0.01/share. It also imposed €2 billion in losses on preferred shareholders and subordinated debt holders. Equity holders were nearly wiped out, but junior bondholders suffered a relatively limited loss of about 30 percent. The total bail-ins amounted to less than the new European rules prescribed in stage one of a bank restructuring. Thus, had Madrid instead been compelled to impose the now mandatory 8 percent of Bankia’s total liabilities and equity on creditors before injecting its own money, Bankia creditors would have faced larger losses.

Spain’s political resistance to such losses and fear of contagion obliged Prime Minister Mariano Rajoy to accept the political conditionality of his ESM bailout instead. But his government might have avoided injecting any public capital into Bankia under Europe’s new bail-in rules. Indeed these rules might have helped Spain avoid its ESM bailout altogether.

In the Anglo-Irish Bank case, losses of 70 to 90 percent were imposed on junior bondholders through bank buybacks at reduced prices. But these costs did not prevent a staggering bill to Irish taxpayers of a third of the bank’s pre-crisis total liabilities and equity. Had the Irish government been allowed to bail-in Anglo-Irish’s senior bondholders, taxpayers would have been spared a lot. But such a deal would not have been enough, on the other hand. Table 1 makes it clear that even after skinning a large share of the bank’s unsecured depositors above €100,000, an Irish government financial contribution would have helped lower the bill for Irish taxpayers, but a “stage three” recapitalization through the ESM might still have been required.

The Anglo-Irish Bank disaster was perhaps the most costly single bank collapse in history, when measured by its home country GDP. In retrospect, it illustrates the fact that Europe’s bank bail-in rules would not cover all circumstances. But Ireland would have faced a lower cost. Europe’s new bank resolutions rules — if applied across all Ireland’s banks in the crisis (and not just Anglo-Irish Bank) — may have enabled the country to avoid going to the International Monetary Fund (IMF). That would have made a large difference for the Irish, too.

Despite the progress toward Europe’s banking union, much work remains. The deals announced in Brussels must be negotiated with the European Parliament, though this should not be difficult.

In my next note, I will discuss the challenges that lie ahead.

Please click here for The Road to a European Banking Union: Part III.

1. In cases — e.g., Sweden — where the government makes resolution financing worth 3 percent of covered assets available, 20 percent of risk weighted assets rather than 8 percent of total assets can be imposed in losses.

2. The DIF in the United States covers both deposit insurance and bank resolution tasks.