US Labor Market and QE Exit

Since the Federal Reserve recently signaled to eventually scale back its quantitative easing (QE) policies, both domestic and global market reactions have been dramatic. 5-10y Treasury rates have risen nearly 50bp since early June and US mortgage rates even more, while risk assets have sold off globally. Current speculation suggests that the Federal Reserve will begin reducing monthly asset purchases from the current $85bn per month beginning in September 2013. However, the Fed will likely not change its current QE policies anytime soon. Along with global market volatility, the persistent US labor market weakness will prevent the Fed from scaling down its quantitative easing policies before December 2013.

The Federal Reserve has placed its dual mandate commitments at the center of attention in its forward monetary policy guidance. FOMC statements have for some time included an explicit reference to keeping the federal funds rate at 0-0.25 percent for at least as long as the unemployment rate remains above 6.5 percent. And Chairman Bernanke at his most recent press conference introduced a new soft QE employment guidance, stating that “when asset purchases ultimately come to an end, the unemployment rate would likely be in the vicinity of 7 percent”. Combining this type of forward guidance with the frequent references made by FOMC members, and Bernanke in particular, concerning the long-term detrimental effects of persistently high US unemployment, it is clear that the Federal Reserve attaches the utmost importance to the labor market situation.

The US unemployment rate has been falling in recent quarters to 7.5-7.6 percent, and assumptions of ongoing future improvements at the same pace could give rise to expectations about an imminent Federal Reserve change to asset purchase policies. However, declining official US unemployment rates misrepresent the true state of the US labor market, which remains mired in a historic crisis. Assuming that the Federal Reserve will shortly begin to reduce asset purchases would therefore imply that the concerns expressed to date about the state of the US labor market by Chairman Bernanke and the FOMC were essentially a charade. 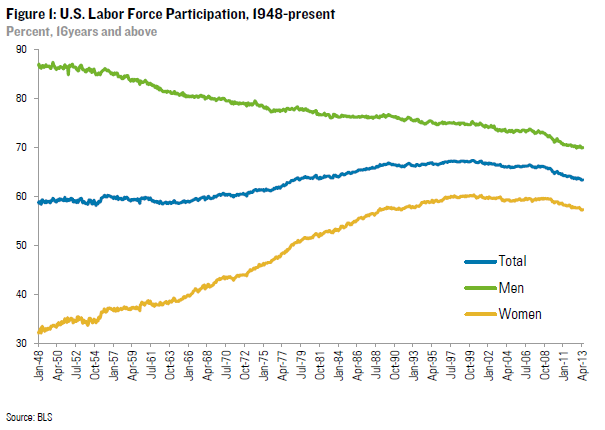 Figure 2 illustrates the same misery for US employment rates, which despite recent sustained job gains have essentially been flat since late 2009. Again it is evident how the share of American men in employment remains at a historic low. All told, when adjusting for US population increases, every job created in the United States since around the first term of Ronald Reagan has disappeared since the beginning of the Great Recession. 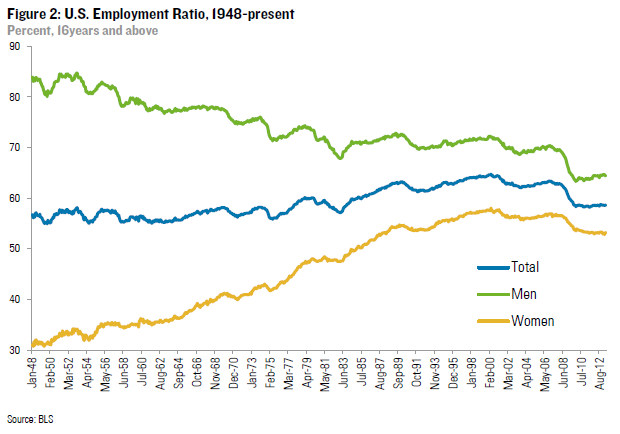 The situation is particularly dire for young Americans, who face the prospect of persistent “wage scarring” from being unable to land a job after finishing education. Figure 3 shows how both US youth labor force participation and employment rates remain at post-WW2 lows of about 55 and 45 percent, respectively. 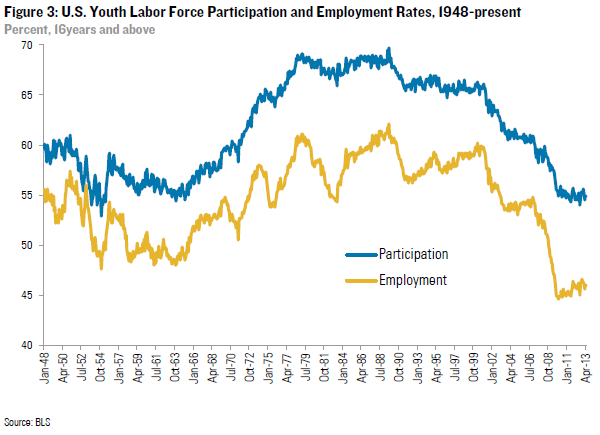 Moreover, the job situation facing American youth today is also alarming from an international perspective. Young people in the education system are not counted as part of the labor force, but society benefits from them acquiring more education, so the most appropriate measurement of the difficulties facing young people is the NEETs ratio: the share of youth that is not in employment, education or training. This ratio captures the share of young people that is not enrolled in school and not working.

Figure 4, built from the latest data from the OECD, shows how at nearly 16 percent of the 15-29y age group, the United States NEETs ratio is marginally higher than both the OECD and EU-21 average. Indeed, almost as many youth in the US are neither in school nor employed as in France – a notoriously dysfunctional European labor market. In short, more young people in the United States are at risk of joining a “lost generation” than in the OECD as a whole and in Europe.

Now, even in today’s age of unprecedented monetary activism, it is clear that the Federal Reserve cannot solve every economic problem facing the United States. Consequently, it might be argued that Ben Bernanke and his colleagues have already done more than enough to stimulate the US labor market, and despite the lack of real progress to date (as seen in Figures 1-4), it is now time for other parts of the federal and state governments to take over. 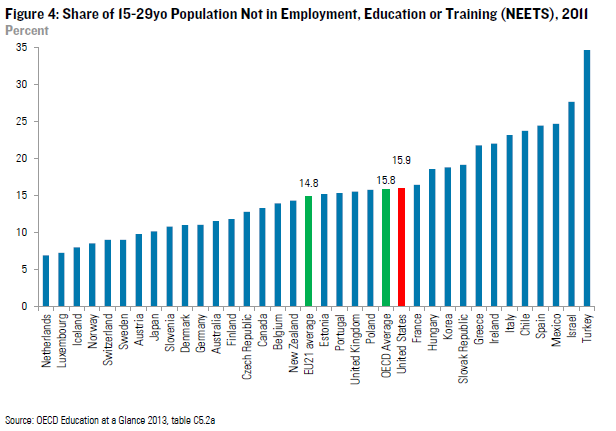 This line of argument is often heard in Europe, where the ECB constantly reiterates the need for euro area governments to “do their part”. However, it is far less applicable to the United States than to Europe. Quite unlike labor markets in many European countries, which remain shackled by excessive and restrictive regulations which only governments can change, the US labor market is largely unregulated and highly flexible. Consequently, apart from a wholesale reversal of the current fiscal consolidation path, there is relatively little that federal, state and local governments can do to stimulate US job creation in the short run. It really is up to the Federal Reserve, in line with its dual mandate, to stimulate job creation in America.

Because of the traditional flexibility and geographic mobility of US workers, focusing on both elements of the Federal Reserve’s mandate has been relatively easy for the FOMC. The US non-accelerating inflation rate of unemployment (NAIRU) has traditionally been low, at an estimated 5-5.5 percent, and long-term unemployment (hysteresis) concerns have largely been absent from the economy. However, with millions of working age Americans out of the labor market for a multi-year period, it seems improbable, based on the experiences of other advanced economies (especially those in Europe), that more permanent labor market damage can be avoided in the United States. Long-term unemployed workers’ skills will have been depreciated, and members of this group increasingly suffer a stigma among potential employers. Combined with rapid technological advances in more sectors of the economy – especially services sectors traditionally less affected by technologically-induced job losses – it is increasingly likely that the US labor market will be less efficient at employing American workers in the future.

Figure 5 shows the US Beveridge Curve, which illustrates the relationship between unemployment and US employers looking for workers, creating a measure of the allocation efficiency of the American labor market. The lower the unemployment and share of firms looking for workers (lower left corner), the more efficient the labor market is, and vice versa. It shows how since the collapse of Lehman Brothers in Q3 2008, the US Beveridge Curve has shifted outwards, indicating a deterioration of the efficiency at which workers are allocated in the US labor market. Unless this is reversed, the Federal Reserve’s dual mandate will permanently become more difficult to implement. 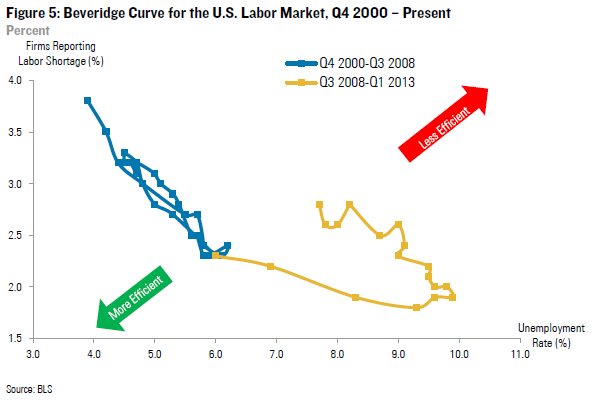 It is also generally the case in periods of deep recession that a certain level of “leakage” exists in the social system, meaning that workers without salary income will find ways to tap other social benefits, for instance, when their unemployment benefits run out. If such leakages shift workers onto permanent government benefits, their likelihood of ever returning to the workforce is reduced and lasting damage is inflicted on economic growth prospects.

All told, the US Beveridge Curve data and the increases in the number of working age Americans permanently removed from the workforce suggests that the US labor market has suffered more permanent damage from the crisis since 2008. This will ceteris paribus make it more difficult for the Federal Reserve to reverse its current level of asset purchases while remaining faithful to its dual mandate. Economic data will need to show substantially more improvement in the US labor market for this decision to be announced – and that is not likely by September 2013. 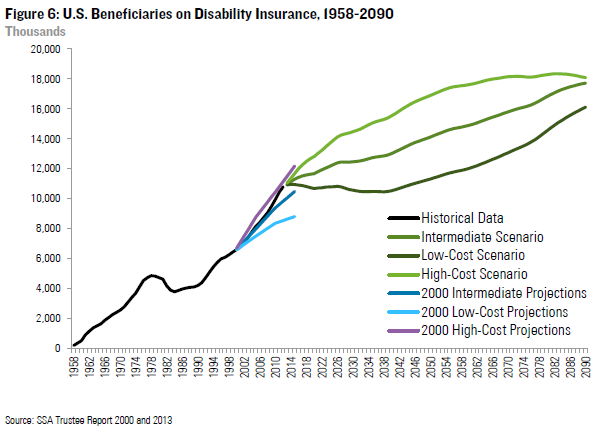 In sum, the US labor market remains in a state of crisis with historically low participation and employment rates, reduced efficiency in worker allocation and increased numbers of working age Americans permanently on disability benefits. It will be very difficult for the FOMC to change its current asset purchasing policy in the absence of new and very encouraging labor market data without jeopardizing its commitment to its dual mandate.

Together with the recent unexpected political turbulence in several large emerging markets and China’s shift towards a less credit and investment intensive economic growth model, the freedom of the Federal Reserve to scale back its asset purchases is reduced in the very short-term. We can therefore expect the Fed to not make any changes to its current QE policies in September 2013.

Instead, and still within the most recent articulation by Ben Bernanke on June 17th, where he noted that the “Committee currently anticipates that it would be appropriate to moderate the monthly pace of purchases later this year”, any exit from current policies will not happen before December 2013. The failure of incoming US economic data – especially on job creation – to improve beyond the current trajectory may even push any changes to the current Federal Reserve asset purchase levels into 2014.