Following the electoral earthquake in November 2012, the prospects for immigration reform are looking favorable.1 Republicans are increasingly concerned about alienating America’s biggest and most rapidly growing minority group while Democrats feel obligated to deliver the goods to the Hispanic voters who have been part of a loyal electoral bloc in the two last presidential elections. President Obama sees comprehensive immigration reform as a way of splitting the Republican Party just as he did with the fiscal cliff negotiations over the new year.

At least five issues should be included in “comprehensive” immigration reform in America:

Unsurprisingly, the different Senate constituencies and the White House have different priorities on these elements. The Senate “gang of eight” (Senators Schumer, McCain, Durbin, Graham, Menendez, Rubio, Bennet, and Flake) in their Bipartisan Framework for Comprehensive Immigration Reform took up four of them by focusing on:

I. Creating a Path to Citizenship for Unauthorized Immigrants Already Here that is Continent On Securing the Border and Combating Visa Overstays. The specifics are unclear on this proposal, but the sequencing is evident, with new border control measures preceding any potential changes in the legal status of existing illegal immigrants.

II. Improving the Legal Immigration System and Attaching the World’s Best and Brightest. The only concrete proposal under this heading is the no-brainer of awarding a green card to immigrants with a PhD or master’s degree in science, technology, engineering, or math from an American university.

III. Strong Employment Verification. Under this heading, the federal government would create an effective employment verification system preventing identity theft and ending the hiring of future unauthorized workers. It would require prospective workers to demonstrate both legal status and identity, through non-forgeable electronic means prior to obtaining employment.

IV. Admitting New Workers and Protecting Workers’ Rights. Here the senators propose to let businesses hire lower-skilled workers in a timely manner when Americans are unavailable or unwilling to fill those jobs. The program would be tailored for the agricultural and dairy industries. This element would be cyclically adjusted to allow more low-skilled immigrants to enter the United States when the economy is creating jobs and fewer when it is not.

Details on these objectives remain extremely vague, suggesting difficulties that lie ahead and the haste that the senators felt in launching their bipartisan proposals ahead of President Obama’s big speech in Las Vegas on the topic the next day. Clearly the agriculture lobby was more influential than the high-tech lobby among the eight.

The opposite is the case among the Senate gang of four (Senators Hatch, Klobuchar, Rubio, and Coons2), which has introduced the only new piece of immigration legislation [PDF] focusing exclusively on high-skilled immigration. The Immigration Innovation (I2) Act of 2013 proposes to do numerous things for both temporary high-skilled visa holders, student visa holders, and high-skilled permanent immigrants.

Immigrant Visas and Green Cards Would:

These legislative proposals strike me as sensible and good for the US economy. The overall number of H-1B high-skilled is increased, and a degree of continent cyclical upward adjustment is introduced, alleviating the risk of potential employment bottlenecks. Completely removing the 20,000 H1-B cap for advanced degree recipients is a constructive step, and would affect students also outside the STEM fields. Streamlining the green card system by exempting key groups from caps and removing per-country limits is similarly far sighted, thought it is not clear whether the new proposed fees replace or add to existing high-skilled visa fees.

Meanwhile, President Obama in his speech on immigration reform focused on four topics:

A substantial overlap exists between the different Senate gangs and President Obama about the general direction and even some of the specifics of a new US immigration reform, so success seems reachable in 2013.

This will likely continue to make the United States an outlier in the OECD [Organization for Economic Cooperation and Development], the club of leading industrial democracies, whose members have increasingly shifted away from from family-based immigration towards employment-based migration. This is illustrated with the latest available data in figure 1. 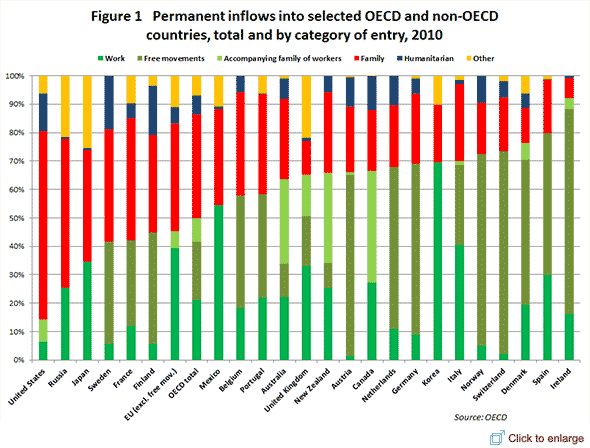 To what degree the United States wishes to shape its immigration system based on family or employment objectives is of course a political decision. But the assumed limited focus on employment as an objective raises doubts about the United States’ ability to enter into far reaching new services-oriented trade agreements in the future.

The North American Free Trade Agreement (NAFTA)5 and previous US free trade agreements (FTAs), such as the US-Australia FTA with its E-3 visa,6 and the US-Chile and US-Singapore FTAs with their carve-outs of H1-B visas,7 have included provisions relating to US immigration law. But future services-oriented free trade agreements would probably have to go beyond such piecemeal approaches, even with the larger number of H-1B visas potentially available under the gang of four proposals.

Accordingly, US free trade proponents should use the coming political window of opportunity for “comprehensive immigration reform” to make sure that reform includes a revamped high-skilled immigration system more attuned to the needs of a global services economy. The goal should include creation of new US high-skilled visa categories, such as a “GATS (General Agreement on Trade in Services) visa”8 or other types of explicitly trade-related visas.

More broadly, the United States should use its policy on visas and entire visa as a bargaining chip in negotiations with other countries favoring such changes and potentially willing to compensate the United States in return. As illustrated above, such quid pro quos have occurred on a limited scale in some FTAs. But a much bolder approach would help exploit the potential economic benefits to the United States in the global services economy (see Jensen 2011). Market access abroad for US services firms will expand with greater visa access to the citizens/residents of negotiating partners. One example would be the widely discussed EU-India FTA, in which the EU has signaled a readiness to grant more visas for high-skilled Indians in return for improved market access for EU firms in India. Media reports suggest 40,000 to 50,000 such new visas may be part of an EU-India FTA.

Given American political sensitivities, visa categories to be included in FTA negotiations would probably have to be tied to the US business cycle (as is also the case in the gang of four H-1B proposals). Such arrangements might also have to subject to trade enforcement actions and sanctions, including a 10 percent reduction in the number of visas available if the agreements are not implemented.

Given the intensity of the immigration issue, Congress will not likely want to revisit immigration for some time after reform is adopted in 2013. America’s free trade advocates should therefore engage fully in the coming immigration reform debate and ensure this vital visa bargaining chip is part of FTA negotiations.

2. Senators Blumenthal, Flake, Heller, Hoeven, Shaheen, and Warner are identified as original composers of the bill.

3. The “Free Movement” category covers migrants moving under freedom of labor movement rules in place inside the European Union/European Economic Area (EEA) and between Australia and New Zealand.

5. NAFTA contains provisions in mode 4 concerning the so-called TN or Trade NAFTA visa, which allows Canadian and Mexican citizens to take up professional occupations on the NAFTA Professional Job List in the United States, provided that several specific provisions are met. The NAFTA visa is valid for one year, but can in theory be renewed indefinitely.

7. Nationals from Chile and Singapore have first access to a total of 6,800 out of the currently legislated 65,000 annual H1-B visas. Unused numbers in this pool are made available for H1-B use for the next fiscal year.

8. This proposal by Indian trade negotiators originally made during the Uruguay Round of global trade negotiations, meant to introduce a new class of visa with more streamlined application procedures, and more flexible conditions, to facilitate the movement of people covered by a country’s mode 4 GATS commitments.