Back to Twin Surplus

The People’s Bank of China just released preliminary data for China’s 2013 balance of payments, which provides a snapshot of China’s economic exchanges with the rest of the world. This notes summarizes the most important developments in the past year and discusses the implications for China’s partner economies and the exchange rate outlook.

After a temporary drop in the financial account in 2012, China’s balance of payments (BOP) swung back to a twin surplus in 2013 (Figure 1). The current account (CA) balance was largely flat at $189 billion (compared to $193 billion in 2012). Detailed statistics on the financial account (FA) are not available yet, but we estimate a return to a FA surplus in the ballpark of $280 billion, based on available Q1-Q3 data points. 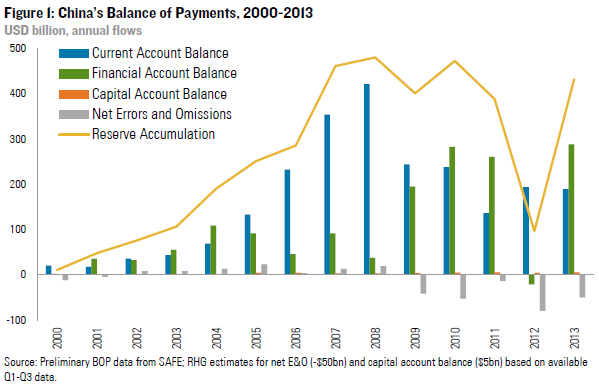 The available breakdown of the current account shows that the surplus remained at about the same level as in 2012 (Figure 2). China’s goods trade surplus increased to $360 billion from $322 billion in 2012 and almost topped 2008 record levels. However, much of the increase in the goods trade balance was made up for by a greater services trade deficit, which jumped from $90 billion in 2012 to $122 billion in 2013. One important driver was a significant swing in tourism-related payments, where China recorded a net surplus until 2008, which turned into a $80 billion deficit in 2013. Net income payments, which are also counted under the CA, remained negative to the tune of $41 billion, despite China’s hugely positive net international investment position of more than $1.8 trillion. This reflects the composition of China’s international investment position with most assets in government debt securities while foreigners hold mostly FDI and equities in China. 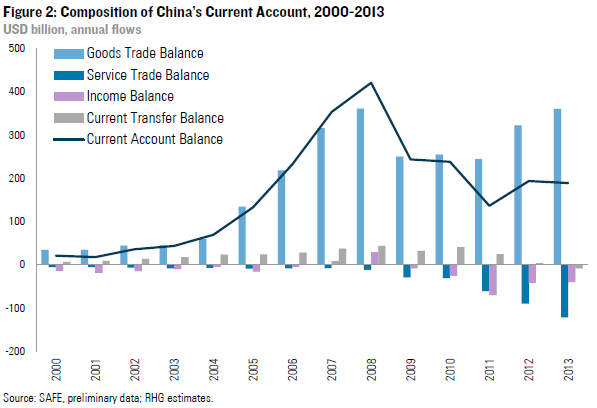 The financial account (which is now the official term for the old “capital account”, whereas the capital account now is a small position showing certain transfers of capital and non-produced assets) showed the largest swing, from a net deficit of $21 billion to a surplus of more than $260 billion (Figure 3). Available data on direct investment shows that the FDI surplus continued to narrow from $191 billion in 2012 to $171 billion last year as outward FDI reached new record highs (note that SAFE uses a broader definition of FDI than MOFCOM).

Detailed figures on other capital flows will be released in a few weeks, but Q1-Q3 data points indicate that it was mostly currency expectations by firms and banks that are responsible for the large swing in the financial account. The surplus in securities investment only widened marginally, which is no surprise, given the existing restrictions of inflows to channels such as QFII. The bulk of change occurred in the “other investment” category, which swung from a 2012 deficit of $260 billion to a 2013 surplus in the ballpark of $50-100 billion. These flows capture trade credit, loans, deposits and currency holdings and reflect the decisions of firms and banks to sell or hold foreign exchange. Uncertainty about the Chinese economic outlook and a reversal in RMB expectations led firms to hold onto their FX in Q2 – Q4 2012, causing the FA balance to drop into deficit in 2012. Since Q1 2013 currency expectations have reversed towards a steady one-way RMB appreciation and firms are selling off FX to hold RMB instead, turning the “other investment” balance and thus the FA overall back into positive territory. 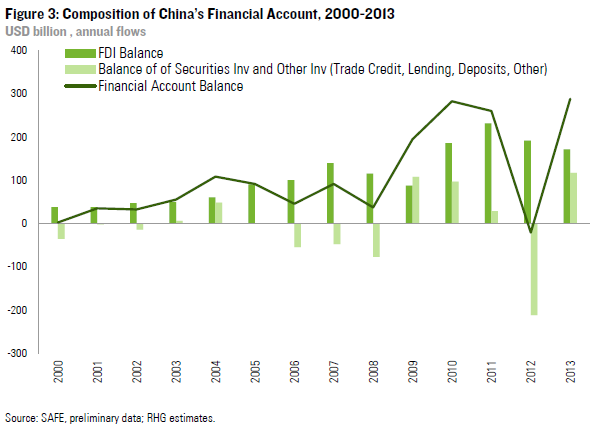 The lower-than-expected current account surplus suggests that China will be able to extend the break it has gotten from its economic partners in recent years with regard to external adjustment pressures (see previous IMF projections in Figure 4). However, we expect G-20 pressure on China to re-emerge in 2014 for two reasons: First, in nominal dollar terms, China’s 2013 trade balance grew to $360 billion and reached almost the same levels as in 2008 (there is some hot money in the BOP data but we get similar patterns from China Customs data). Looking forward, we expect China’s goods trade imbalance to further worsen in 2014 due to economic rebalancing at home (weaker commodity imports due to both volume and price effects) and stronger demand from overseas from economic recovery in the US and other advanced economies. It is possible that China’s service trade deficit continues to widen as well, but probably not fast enough to make up for a greater goods trade surplus. In short, in the absence of major turmoil in the global economy, pressure on China to adjust its goods trade balance through the exchange rate and other channels will further increase in 2014. 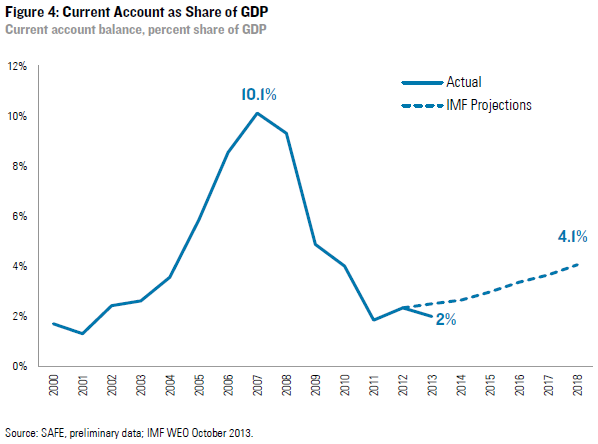 Flows under the financial account will largely depend on macro expectations by market participants. We expect the FDI balance to remain largely stable, with some upside potential if announced reforms give way to greater FDI in new sectors like energy or banking. Securities investment flows will depend on the government’s readiness to expand current pilot schemes to liberalize inflows and outflows, but the scope of changes will likely remain small in the big picture. The balance of “other investment” flows will be driven by the sentiment of market participants towards RMB appreciation and interest rates. Unless China finds a way to counter the current one-way RMB appreciation expectations, for example through a wider trading band, the FA balance will remain in surplus. This in turn will necessitate the central bank to continue to buy forex and in turn purchase debt securities overseas, despite the recent rhetoric by central bank officials that greater reserves were not in China’s national interest.