A new report by Rhodium Group and the Mercator Institute for China Studies (MERICS) takes stock of Chinese investment patterns into the European Union in 2018, and puts those trends in context with ongoing policy changes in Europe.

The analysis shows that Chinese foreign direct investment (FDI) in the European Union continued to decline in 2018. The combined value of completed Chinese FDI transactions in the EU fell to EUR 17.3 billion in 2018, down 40% from 2017 levels (EUR 29.1 billion). This represents the lowest investment level since 2014 and a drop of over 50% from the peak of EUR 37 billion in 2016.

This fall was not specific to the EU: Chinese global FDI continued to fall in 2018, on the back of strict capital controls in China, and a domestic deleveraging campaign that limited Chinese investors’ scope for overseas expansion. This decline was also, in part, prompted by growing political and regulatory pushback against Chinese commercial presence in advanced economies—though the effect of such pushback is still more limited in the EU than in the US.

Compared to previous year, Chinese FDI was spread more evenly, across a greater variety of sectors. In the absence of mega deals, no single sector accounted for more than 20% of overall Chinese investment. State-owned enterprises’ share of total Chinese investment fell to 41% from 71% in 2017—the second lowest level on record. 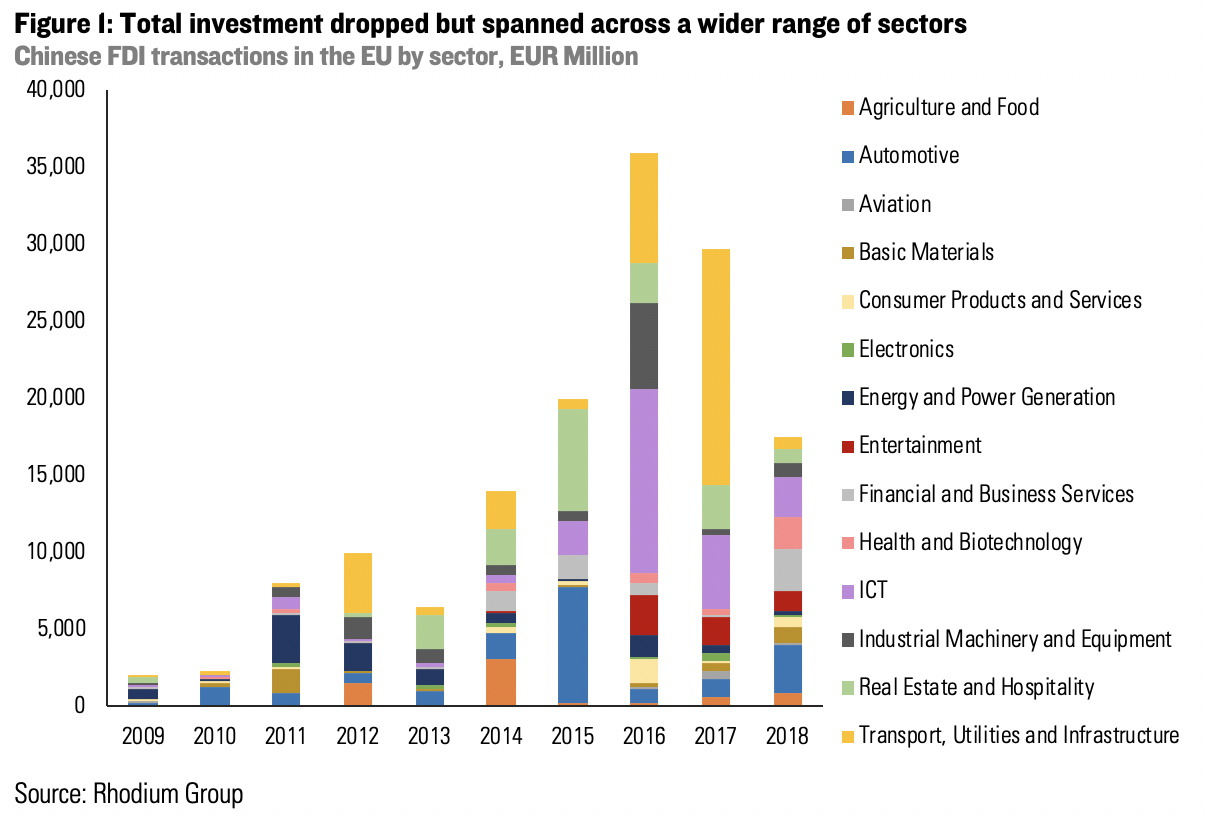 The EU remains an attractive region for Chinese investors. At the start of 2019, more than EUR 15 billion worth of proposed transactions were pending. The recent expansion of the US investment screening regime, and continued US–China tensions, might also boost Chinese investment in Europe in the near-term.

However, greater scrutiny is to be expected around Chinese FDI into Europe. At the EU-level, a new EU investment screening framework was presented in November 2018, and passed by the European Parliament in February 2019. It encourages member states to specifically review investment in sensitive sectors including critical technologies and infrastructures, as well as transactions by state-controlled entities or those backed by “state-led programs”—all of which have tended to characterize Chinese investment in the EU.

The authors estimate that 82% of Chinese mergers and acquisitions above EUR 1mn in 2018 would have fallen into at least one of these three categories (Figure 2). 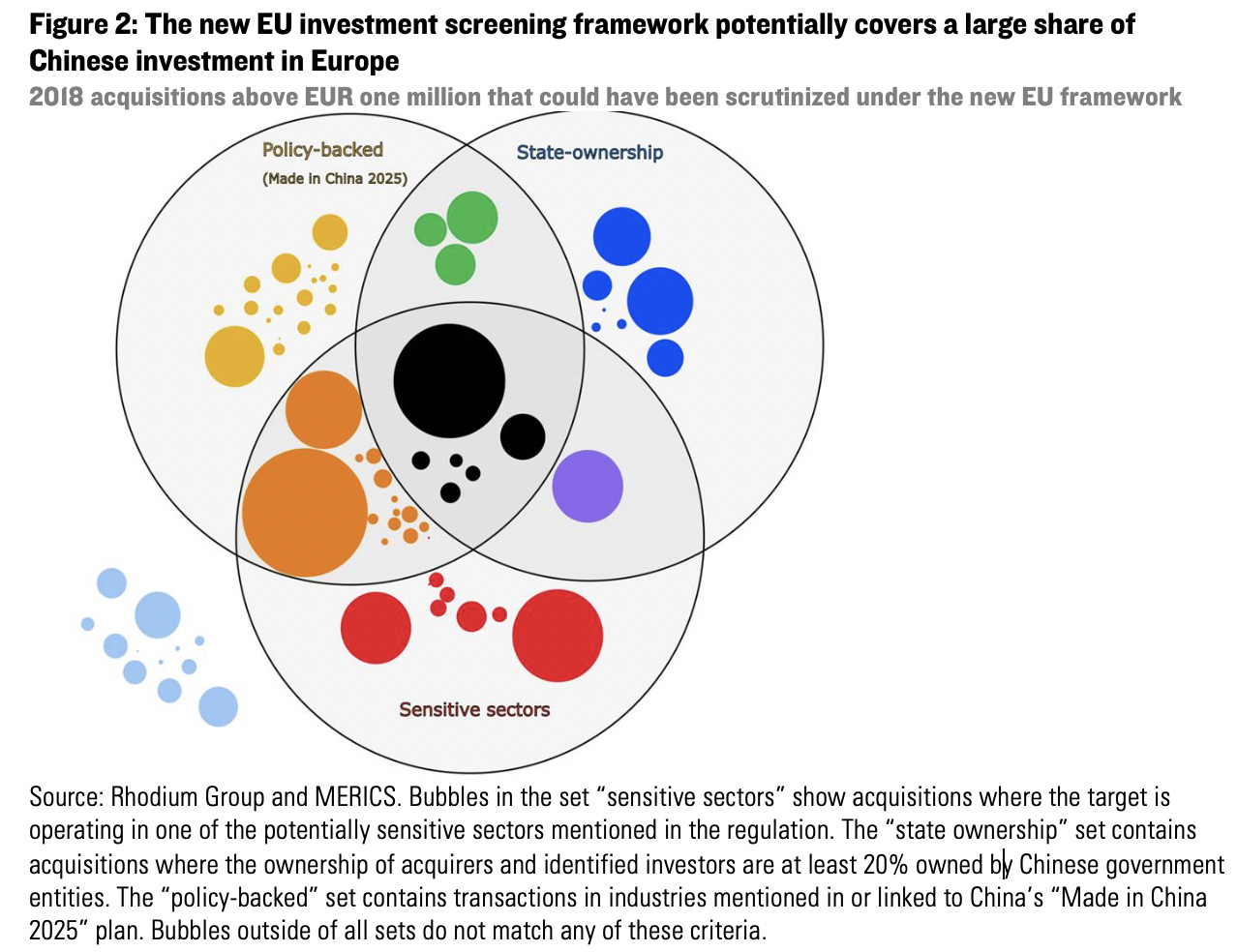 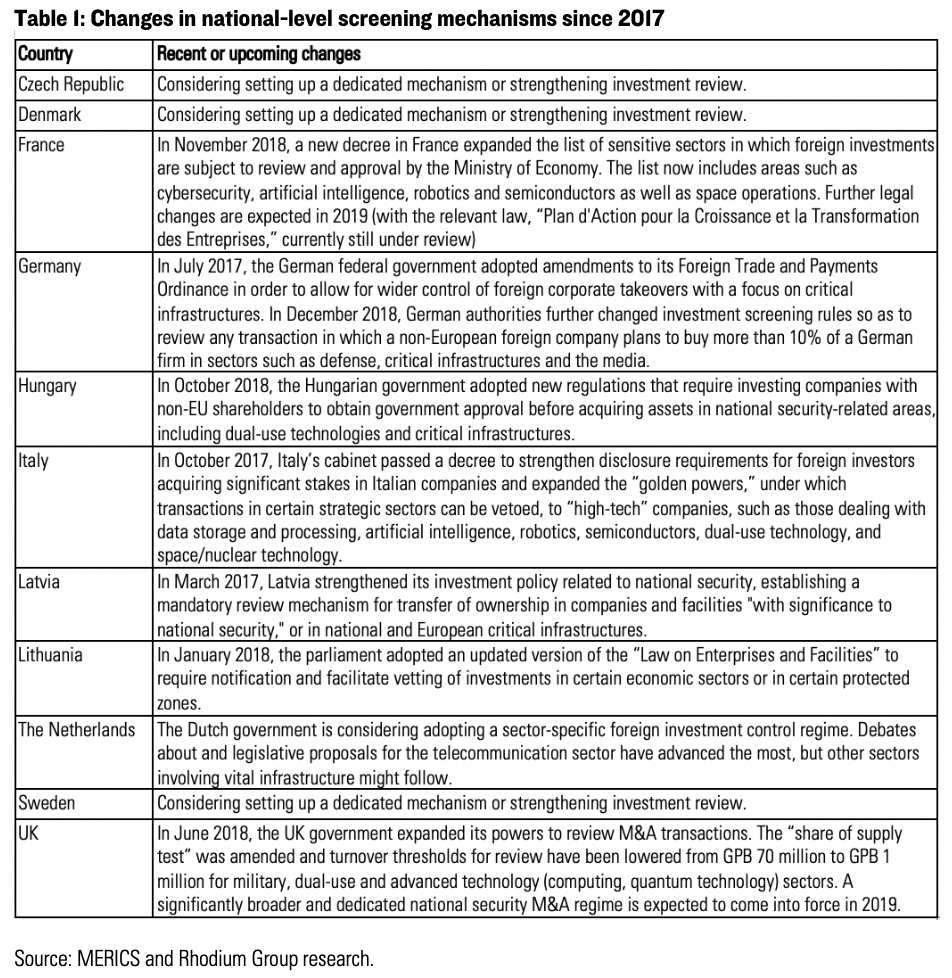 Despite wide-ranging changes over the past two years in European FDI screening regimes, the continent remains a largely permissive investment destination. Yet the overhaul of investment screening frameworks is probably only the first step in a broader overhaul of the EU’s stance and policy tools in response to growing Chinese economic activities in Europe. The Union and its member states are playing catch-up with other advanced economies that have already implemented similar policies in response to concerns about the nature and direction of China’s economic and political system. If other Organization for Economic Co-operation and Development economies serve as a guide, the most likely areas for additional policy action are export controls for dual use and critical technologies, data security and privacy rules, procurement rules, and competition policy.