In 2017, China’s global outbound investment declined for the first time in more than a decade. According to China’s Ministry of Commerce (MOFCOM), outbound FDI by Chinese companies dropped by 29%. Other data sources that measure financial flows related to outbound investment record an even sharper drop, for example a 53% decline in SAFE figures on change in China’s FDI assets. A new report, delivered by the Mercator Institute for China Studies and Rhodium Group, explores these trends.

This slowdown in global investment followed action by Chinese regulators to re-assert control over outbound investment flows. In late 2016, they had cracked down on informal “irrational” outbound investment to contain capital outflows, after the latter had grown to an average of more than USD 50 billion per month in 2016. In August 2017, these informal policies were codified through a new OFDI regime based on lists of encouraged, restricted and prohibited investments.3 Outbound investment was dragged down further by a campaign to reduce leverage in China’s financial sector. Regulators particularly targeted large private conglomerates, many of which had become aggressive overseas dealmakers in recent years.

Chinese outbound investors also faced growing political and regulatory pushback around the globe, as major recipient countries of Chinese FDI beefed up their investment screening regimes to fend off perceived national security risks and, in some cases, economic risks. 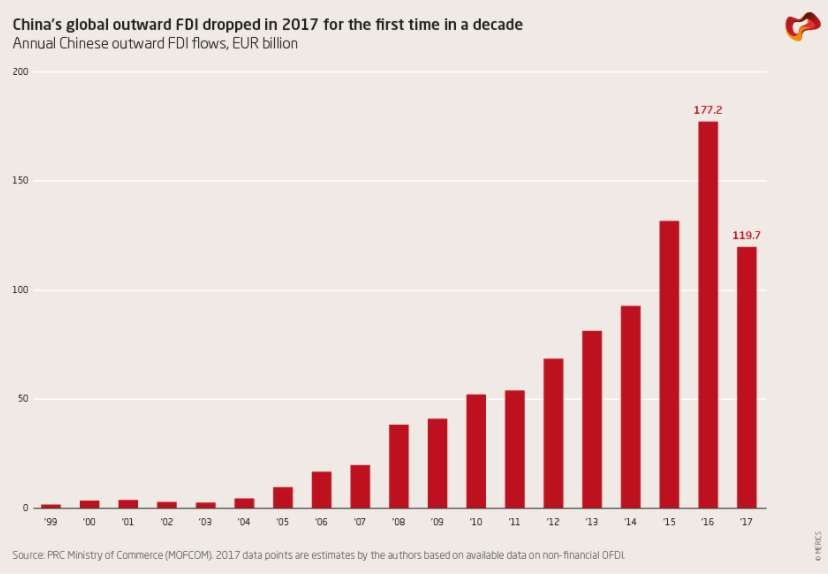