President Xi’s state visit to the United States in September has illustrated how important two-way investment has become for US-China economic relations, including visits at Chinese-owned companies and discussions to advance a bilateral investment treaty. This note provides an update on Chinese investment activity in the US economy in the third quarter of 2015 and policy developments impacting China-US direct investment flows.

Record number of deals and strong pipeline for rest of the year: Chinese companies completed 46 FDI transactions in 3Q 2015, together worth $3 billion. With investments of more than $9 billion in the first three quarters and more than $8 billion of pending transactions, total investment will likely again exceed $10 billion in 2015.

Autos, entertainment, and insurance are key sectors: Autos remain an important focus for Chinese companies, with acquisitions of advanced manufacturing assets and growing spending on electric vehicle development and production. Chinese investors are also making inroads in the entertainment industry, with a recent focus on sports entertainment. Investment into the insurance industry continues to be strong, with two new acquisitions this quarter and several pending deals in the pipeline.

Asymmetries in market access increase political risk: The strong growth of Chinese investment in US high tech and services assets further boosts the case for greater symmetry in market access for foreign companies in those sectors in China. The growing imbalance of FDI flows in sectors like financial services calls for China to accelerate FDI reforms and demonstrate its reform commitment through an “early harvest”, instead of holding back until it has implemented its domestic negative list system by 2018. 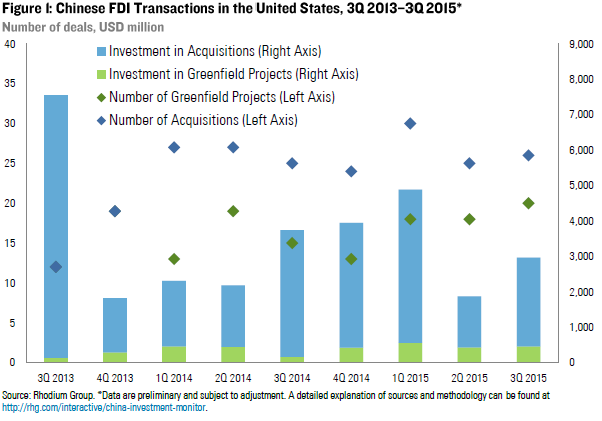 The $600 million acquisition of auto supplier Henniges by Chinese state-owned auto giant AVIC and BHR marks the biggest Chinese investment into US automotive manufacturing assets to date. In addition to assets along the traditional auto value chain, Chinese companies are also ramping up their investments in the US electric vehicle (EV) market through greenfield FDI. Wanxiang subsidiary Fisker Automotive recently signed a lease for a new manufacturing facility in Moreno Valley in an attempt to compete directly with Tesla in “Made in the US” high-end electric cars. This will be the second Chinese EV manufacturing facility in California, following BYD’s bus assembly facility in Lancaster. Another electric vehicle maker with rumored Chinese backers, Faraday Future, announced plans to invest $1 billion in a manufacturing facility in the US.  State-owned auto company Beijing Automobile Industry Holding (BAIC), who owns a stake in US electric car maker Atieva, also established a new R&D center in Silicon Valley this quarter.

Wanda Group’s acquisition of the Word Triathlon Corporation ($650 mn), which operates the Ironman competitions, represents the first significant Chinese investment in the US sports industry. The WTC acquisition comes after Wanda investments in Swiss Infront Sports & Media and Spanish soccer club Atletico Madrid, making Wanda one of the largest sport operating companies in the world. Other Chinese ventures into sports entertainment this quarter include Ourgame International’s acquisition of the World Poker Tour and Zhejiang Geely Holding’s acquisition of Miller Motorsports Park.

Chinese investment into the US insurance sector continued in 3Q 2015 with two more deals from Fosun: the acquisition of Meadowbrook Insurance in July ($433 million), and the acquisition of another US insurance company Mackinaw Administrators through Meadowbrook.  Fosun is also expected to acquire the remaining 80% of Ironshore Insurance (about $1.84 billion), and Anbang Insurance recently announced the takeover of Fidelity & Guaranty Life ($1.57 billion). 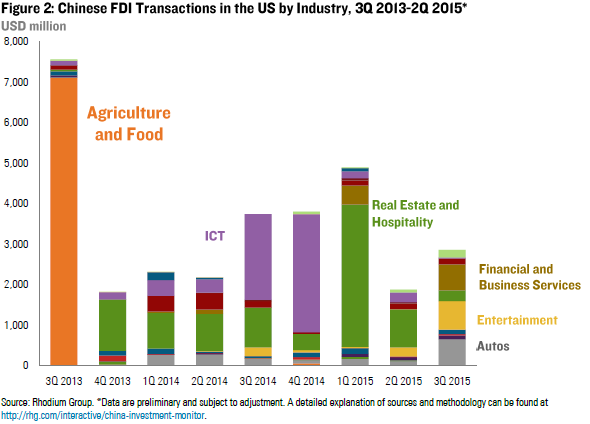 US investment by state-owned enterprises (SOEs) remained weak in 2015, but AVIC’s $600 million acquisition of auto supplier Henniges helped to boost SOEs share to 22% of total investment in the first three quarters of 2015. Investment by private sector firms continues to boom as they are eying technology, brands, and consumer-related assets. Private firms account for 78% of total investment so far this year. Privately owned financial investments by firms such as Fosun or Anbang (recorded as private as there is no definitive evidence of current government ownership) are another important driver of growth, with investments of more than $3 billion in the first nine months of the year. 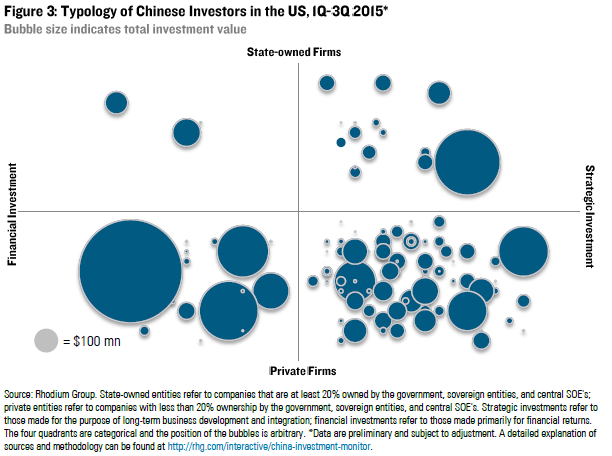 Capital outflows picked up again in 3Q 2015 following the stock market crash, concerns about the capacity of Chinese policymakers and regulators, and the mini-devaluation of the renminbi in early August (Figure 4). In order to reduce pressure on China’s currency, the State Administration of Foreign Exchange (SAFE) and People’s Bank of China (PBOC) have reportedly stepped up checks on illegal flows implemented measures to curb channels for speculative capital flows. While some of these new rules may affect the ability of Chinese companies to conduct cross-border FX transactions related to OFDI operations (for example, regulations that put heavier controls on currency hedging), the leadership continues to support liberalization of encouraged capital outflows such as outward FDI and portfolio flows through legitimate channels. While the government may tweak existing rules to take off pressure on the currency, the likelihood of changing course on OFDI remains small in our view. 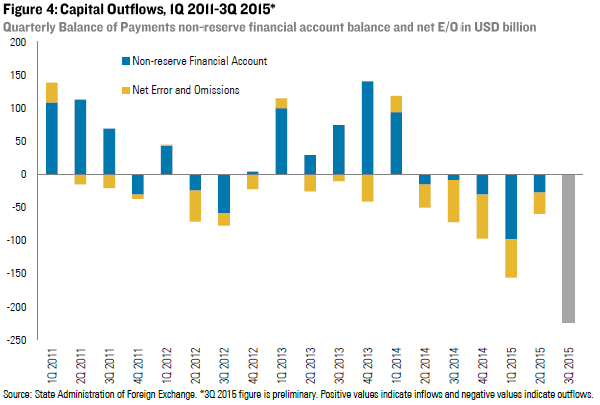 Many observers had hoped for a major breakthrough in US-China bilateral investment treaty negotiations during President Xi’s visit to the US in September. These hopes did not materialize, as significant disagreement remains between both sides over the scope of negative lists for sectors excluded from pre-establishment rights for foreign investors.

This timetable is longer than foreign partners had hoped, particularly as Chinese outbound FDI continues to surge in sectors that are most affected by market entry restrictions in China. Figure 5 for example illustrates that Chinese M&A activity in the US financial services sector has surged past US acquisitions in the Chinese financial sector, which to some extent can be attributed to existing political restrictions in China. These realities of growing Chinese outward FDI and slower than anticipated inward FDI reforms could trigger greater backlash against Chinese investment and increase political pressure on China to demonstrate its reform commitment by implementing symbolic reforms in selected sectors, instead of holding back until it has implemented its domestic negative list system by 2018. 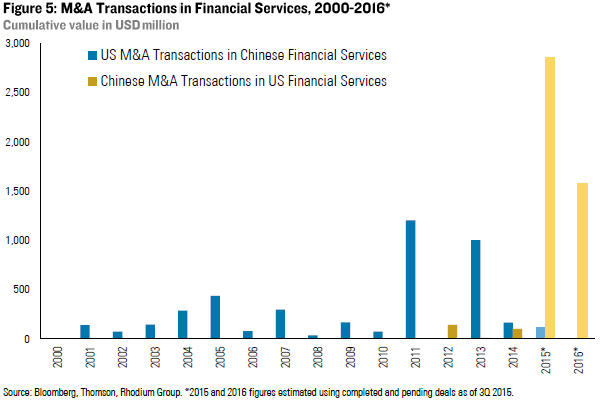 The most important progress from President’s Xi state visit with regard to investment is joint language on limiting the scope of investment screening for security interests. The national security screening criteria that China most recently included in its draft foreign investment law are very broad and greatly expanded previous definitions. At the White House the two leaders agreed to “limit national security reviews for foreign investment solely to issues that constitute national security concerns, and not to generalize the scope of such reviews to include other broader public interest or economic issues”. They also agreed that final passage of a new law from the Chinese side would not trigger retrospective review of every investment already in operation. They endorsed the important principle that mitigation solutions, rather than wholesale prohibitions, should be offered to investors when some legitimate national security issue is present. It remains to be seen how these commitments are implemented in light of existing Chinese laws and regulations, but it is a step forward that China agreed to these principles.

TPP: A wake-up call for China on international investment rules?

Another important development in the broader context of Chinese global outbound investment is the recent breakthrough in Trans-Pacific Partnership (TPP) negotiations. In addition to reducing tariffs, the TPP text includes several important investment-related measures regulating areas such as market access, dispute settlement, and state-owned enterprise disciplines. While the text includes many exceptions and carve-outs to accommodate participating emerging economies, the investment rules are a long way from current Chinese realities. The ratification of the TPP agreement would be a significant success for the US in its attempt to shape the rules of global investment governance, particularly if similar provisions can be implemented in other pending trade agreements such as the Transatlantic Trade and Investment Partnership (TTIP). It remains to be seen if China responds to the TPP by accelerating reforms that lead to better convergence with these global investment norms, or by increasing efforts to develop and promote alternative approaches and frameworks for international investment.

With more than $9 billion in completed transactions and more than $8 billion of pending deals, Chinese FDI in the US will likely surpass $10 billion again for the full year 2015. The biggest pending deals are in the ICT sector, with three big investments in semiconductors: Omnivision ($1.9 billion), Integrated Silicon Solution Inc. (ISSI, about $765 million), and Western Digital ($3.8 billion). The ISSI and Omnivision deals both recently received clearance from the Committee on Foreign Investment in the United States (CFIUS) and are expected to close later this year and in  2016 respectively. Other major pending deals include Fosun’s acquisition of the remaining 80% in Ironshore (about $1.84 billion) and Anbang Insurance’s acquisition of Fidelity & Guaranty Life ($1.57 billion).