In September, Shuanghui International closed its $7.1 billion acquisition of pork producer Smithfield, marking the largest Chinese acquisition in the United States to date. Chinese real estate developers and investors continued to make inroads into the US property market, with Fosun’s $725 million purchase of Chase Manhattan Plaza and Shanghai Greenland’s investment in New York’s Atlantic Yards development. This note reviews the patterns, key transactions and political developments in the US-China investment relationship in Q3 2013.

Double digit investment for the first time this year: In the first nine months of 2013, Chinese firms spent a record $12.2 billion on 55 greenfield projects and acquisitions in the United States, well on the way to a new record of Chinese FDI in the US.

Chinese firms become significant employers in the US: The successful Smithfield takeover doubles the amount of US workers receiving paychecks from Chinese-owned companies from 33,000 to more than 70,000, highlighting the growing significance of Chinese capital for local economies.

US screening system works, but government shutdown threatens outlook: The Smithfield deal and other recent transactions show that the US investment review system works. However, the recent political gridlock in Washington threatens the long-term attractiveness of the US economy for foreign investors. 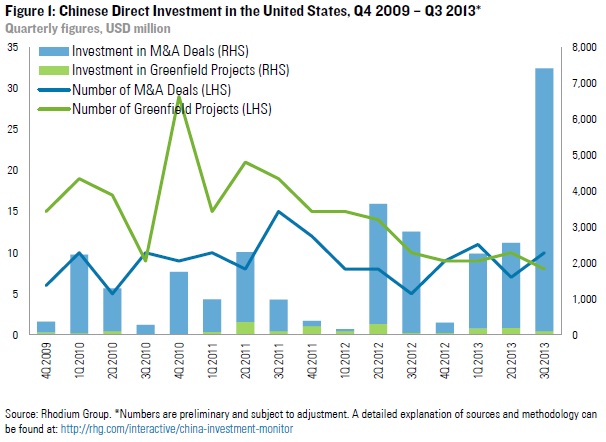 In Q3 2013, Chinese firms spent $7.5 billion on ten acquisitions and eight greenfield projects in the United States. Shuanghui International’s takeover of Smithfield Foods for $7.1 billion (including debt assumption) accounts for the lion’s share of the total deal value, and marks by far the biggest completed FDI transaction by a Chinese firm in the US in history, at almost three times as large as the next biggest deal (Table 1).

Other acquisitions in Q3 include Mindray Medical’s acquisition of Zonare Medical Systems and Hanergy Holding Group’s purchase of Global Solar Energy. Greenfield projects that were started in Q3 include two manufacturing greenfield facilities by JN Fibers and Xingfa Chemicals in South Carolina and Georgia, an R&D center by TravelSky in Georgia, a second wind power project by Sany-affiliated Ralls Corporation and new gas stations by Blu LNG. A detailed breakdown of all deals in Q3 and previous quarters by industry, geography, ownership and entry mode can be found on Rhodium Group’s China Investment Monitor. 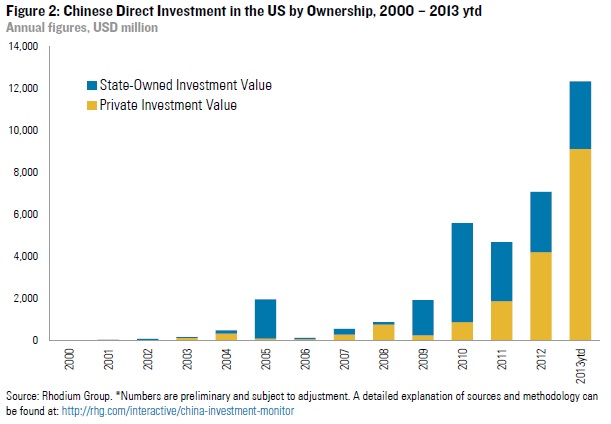 The Shuanghui-Smithfield transaction also tips the scale in favor of private firms for 2013. In past years, state-owned firms accounted for the majority of the total deal value because they historically dominate capital-intensive sectors like oil and gas. Last year, private firms for the first time accounted for more than half of total deal value (59%), largely due to Wanda’s acquisition of AMC. During the first nine months of 2013, private firms accounted for 84% of deals and 74% of total investment value (see Figure 2). Smithfield was also a game changer with regard to employment, with 37,000 of its 47,000 employees located in the US. Counting in Smithfield workers, Chinese firms now send paychecks to more than 70,000 workers in the United States.

Shuanghui International’s $7.1 billion acquisition of Smithfield Foods, the world’s largest pork producer, showcases the growing interest and ability of private Chinese firms to close large-scale deals in advanced economies like the US. Shuanghui International is a Hong Kong-based holding company that owns a majority stake in China’s largest pork processor Henan Shuanghui. As a result of privatization in 2006, it is controlled by the chairman and management of Henan Shuanghui, Chinese private equity firms and strategic foreign investors like Goldman Sachs. The firm plays a leading role in consolidating the fragmented, inefficient and scandal-rattled meat industry in China. The acquisition of a leading US pork producer offers Shuanghui the opportunity to get exposure to modern production processes, benefit from cost advantages from cheap feedstock in the US, learn about best-in-class food safety standards, and leverage a foreign household brand in the Chinese and other fast-growing emerging markets. 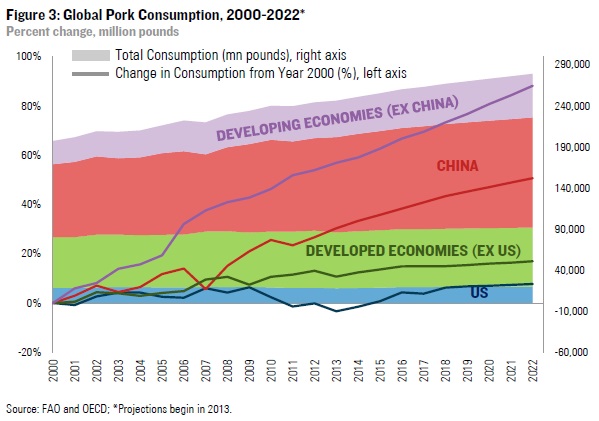 For Smithfield shareholders, Shuanghui’s offer at $34 per share represented a 31% premium over the stock price prior to the takeover. For suppliers, workers and other stakeholders, the partnership with Shuanghui could offer new growth opportunities. Smithfield’s room to grow domestically is limited, as the market is shrinking in light of declining pork consumption. Growth through takeovers is tricky from an antitrust perspective as the firm already controls 26% of the US market. Foreign markets are the most promising way of growing revenue, but overseas expansion has proven difficult for Smithfield in recent years. The merger with Shuanghui brings new opportunities to gain a foothold in overseas markets, particularly in China and other developing countries, where the bulk of pork consumption growth is expected to happen in the coming decade (Figure 3).

Recently closed and announced deals also signal that Chinese investors are pushing for a greater share in the US property market, and that they are willing to engage in bigger transactions. In the first three quarters we counted nine closed property transactions. Two more transactions closed in October and three deals are currently pending (see Table 2). These patterns represent a significant increase in annual transactions, compared to just four closed deals in 2012, eight in 2011 and three in 2010.

The transactions announced in 2013 are also significantly bigger than in previous years. Examples include the Zhang Xin family’s $700 million stake in the General Motors building or the $725 million purchase of Chase Manhattan Plaza by Fosun. Two more large-scale deals by Shanghai Greenland Group are currently pending: in July, Greenland agreed to purchase a stake in the “Metropolis” site in downtown Los Angeles from the California State Teachers’ Retirement System and provide additional capital to develop a mixed-use project on the lot for up to $1 billion; in October, Greenland Group and local developer Forest City Ratner Companies agreed to form a joint venture to develop the Atlantic Yards project in New York, with total expenses of up to $5 billion. 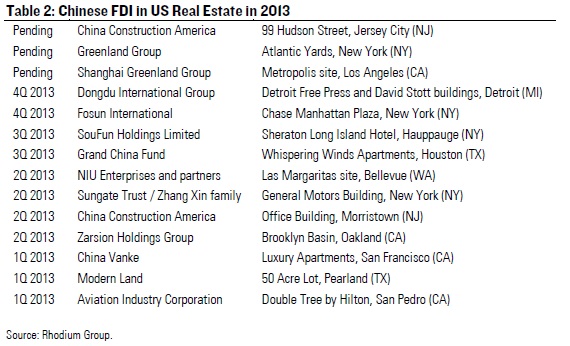 The Smithfield takeover caused a lot of debate in the US, but the approval shows that the FDI review system works, providing a venue for vetting national security concerns while keeping the economy open to foreign investment. China continued to gradually reform and improve its outward FDI policy regime, while expected major economic reforms announced in November may have important consequences for outbound investment.

The Smithfield bid understandably triggered a lot of opposition in the US. Along with members of Congress, all kinds of interest groups used the deal as a platform for their cause: unions, environmentalists, consumer rights advocates, and even health-concerned physicians. The most public event was a hearing by the Senate Committee on Agriculture during which well-known China critics voiced concerns about food security, subsidies and other areas. However, in the end, the Committee on Foreign Investment in the United States (CFIUS) approved the deal after a 75-day review, proving that the US system works – it allows for a thorough review of FDI-related national security concerns while safeguarding an open investment environment.

In early October, the US District Court for the District of Columbia came up with an important decision regarding due process rights for Chinese and other foreign investors. It rejected claims by Sany-affiliated Ralls Corporation against CFIUS and the President that an order to divest wind power assets had violated its due process rights. The judge argued that Ralls “voluntarily acquired state property rights subject to the known risk of a Presidential veto” and “waived the opportunity (…) to obtain a determination from CFIUS and the President before it entered into the transaction.” In short, the court argued that the opportunity to engage with CFIUS and apply for approval before closing a deal represents an adequate due process for foreign investors to safeguard against divesture and expropriation on national security grounds.

One problem for foreign investors was that the recent political gridlock in Washington and the partial government shutdown resulted in CFIUS not accepting any more applications for national security reviews. With the government reopened and a US default avoided, CFIUS was restored, but the review of several deals was delayed. More importantly, the shutdown showcased how dysfunctional US politics have become. The increasing political uncertainty and inability to pass even basic legislation have severely damaged the longer-term prospects for attracting foreign direct investment to the US economy, from China and elsewhere.

China: More Reforms on the Horizon?

China is expected to announce major structural reform efforts during the Third Plenum in November, some of which could have an impact on outbound FDI. One item on top of the reform agenda will be the corporate governance of state-owned enterprises (SOEs). Senior official are increasingly echoing calls for new corporate governance structures at state companies. Possible changes include a shift from a Party-dominated leadership selection process to a modern system that reflects commercial needs and not political merits; hard budget constraints leading to greater capital discipline; and measures to increase transparency and reduce corruption.

Meanwhile, China continues to gradually refine its policy regime for outward FDI, particularly a shift from the existing approval system for outbound foreign direct investment to a registration system. In early September, when Premier Li Keqiang attended the summer Davos forum in Dalian, he said publicly that the Chinese government should further relax the regulations over outbound foreign direct investment (OFDI), either by reducing the approval process for “capable and credible” outbound investors or raising the threshold for mandatory government review. The newly established Shanghai Pilot Free Trade Zone (SHFTZ) is the first locality in China to test such a registration system. According to the grand plan that the State Council released on September 27th, regular OFDI projects from the SHFTZ will only need to be registered with the Shanghai municipal government (not the central ministries), and a nod from the authorities beforehand is no longer necessary.

China also announced new initiatives to improve OFDI risk management and compliance with international rules. First, MOFCOM announced a new “Personnel Information Management System for Outward Investment and Cooperation Businesses”, which requires all OFDI enterprises and agencies sending workers overseas to submit information on domestic employees, employees dispatched abroad and foreign employees. It shows efforts to increase the preparedness for emergency incidents such as the Libya crisis and the independence of South Sudan. In July, China also announced a new “blacklist” for Chinese firms not complying with existing regulations and displaying bad behavior overseas with regard to labor and safety standards, sustainability and respect for local culture. Foreign firms also run the danger of being put on this blacklist if they defraud or cause losses for Chinese firms abroad through inappropriate and illegal behavior. Finally, in August, China announced it was joining the global fight against corporate tax evasion by signing the OECD Convention on Mutual Administrative Assistance in Tax Matters.

With regard to global merger control, the Ministry of Commerce approved a total of 54 transactions in Q3 2013 and imposed conditional approvals on two cases. The merger of two microelectronic integrated circuit designers, Gambro AB and Baxter International, was only approved under the condition that Baxter spins off its global continuous renal replacement therapy (CRRT) assets and terminates certain production agreements for hemodialysis (HD) equipment. The acquisition of MStar Semiconductors by MediaTek was approved on the condition that MediaTek’s LCD TV business will be operated by subsidiary Morningstar Taiwan, who shall remain an “independent competitor”.

Several transactions closed in the first weeks of October, including the acquisition of Mooney Aviation Company by Meijing Group. The sale of AIG’s aviation leasing unit International Lease Finance Corp (ILFC) to a consortium of Chinese investors, on the other hand, seems to have fallen apart. The biggest currently pending transactions are a new $1 billion luxury hotel project in New York by Wanda, MicroPort Scientific’s acquisition of Wright Medical Group’s OrthoRecon business, a potential sale of certain assets of Canadian mobile phone maker Blackberry to Lenovo, and several large-scale real estate transactions, including Greenland Holding’s 70 percent stake in New York’s Atlantic Yards development that could amount to more than $5 billion.