After a slow 6 months, China’s global outbound FDI picked up again in the third quarter of 2014. In the Unites States, Chinese firms spent $3.1 billion on FDI transactions from July to September, including Lenovo’s acquisition of IBM’s x86 server business. This note reviews trends and key developments in China-US investment flows from Q3 2014.

Real estate investment boom continues: Chinese investors have spent more than $3 billion on commercial property in the United States over the past four quarters, making it the top sector in the past year. Other areas with plenty of activity in recent months include technology, entertainment, and food.

Massive liberalization push on Chinese side: In recent months China implemented the most significant reforms to its OFDI policy regime in a decade, which will help sustain recent growth patterns.

In Q3 2014, Chinese firms spent $3.1 billion on 25 FDI transactions in the United States. We count 16 acquisitions that are together worth $3 billion. Total investment in greenfield projects amounted to $86 million, not including future investment in announced multi-year projects. 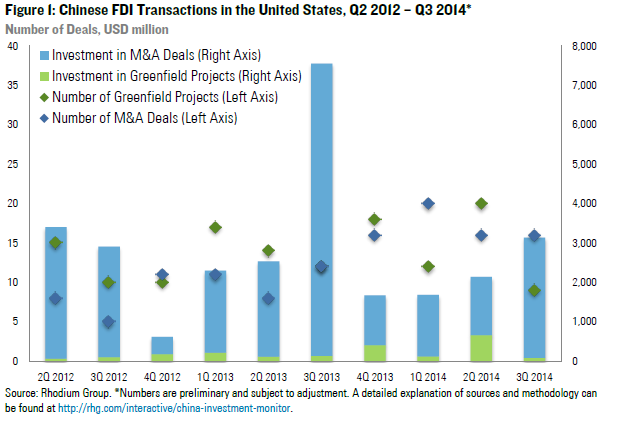 Since mid-2013, commercial real estate has become the single most important sector for Chinese investment in the United States, attracting more than $3 billion over the past four quarters. In Q3 Chinese firms closed property deals in Los Angeles, San Francisco, and Hawaii totaling $588 million. This does not include future development costs pledged by Chinese investors for multi-year projects (for example, Wanda in Beverly Hills or Greenland Group in New York), which together amount to another $3 billion.

The biggest deal in Q3 was Lenovo’s purchase of IBM’s low-end server business ($2.1 billion), which was cleared by the Committee on Foreign Investment in the United States (CFIUS) after the parties re-filed in June to get more time to resolve existing concerns. Along with recent deals in the other direction (Intel’s stakes in Chinese mobile chip producers Spreadtrum and RDA), this successful transaction illustrates that high-tech deals between China and the United States are on the rise, despite bilateral frictions over cyber espionage and IPR theft.

Other sectors attracting Chinese FDI in Q3 included automotive parts, aviation, pharmaceuticals, and software. Two industries that are getting a lot of attention from Chinese investors (but have yet to result in closed transactions) are entertainment and food. 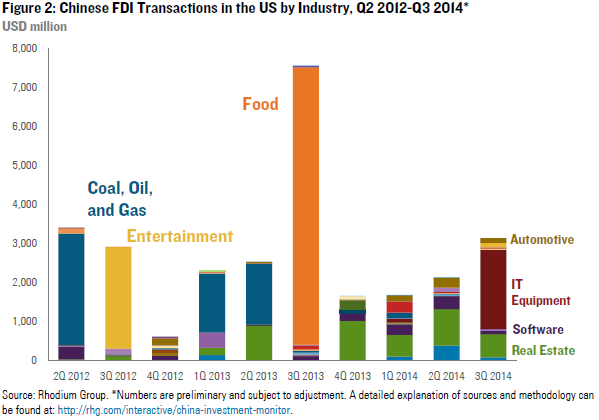 Following a trend from previous quarters, private Chinese firms continued to lead deal making in the US in Q3. State-owned enterprises almost entirely dropped out of the picture, with the exception of a few manufacturing industries that still are dominated by state players, such as automotive and aviation. While strategic investments by private firms still account for the majority of US deals, we continue to see an increase in activity by large financial conglomerates (such as Fosun) and institutional investors (insurance firms), who are using FDI stakes to diversify their investment portfolio, in response to declining opportunities in the Chinese market and greater political freedom to invest overseas. 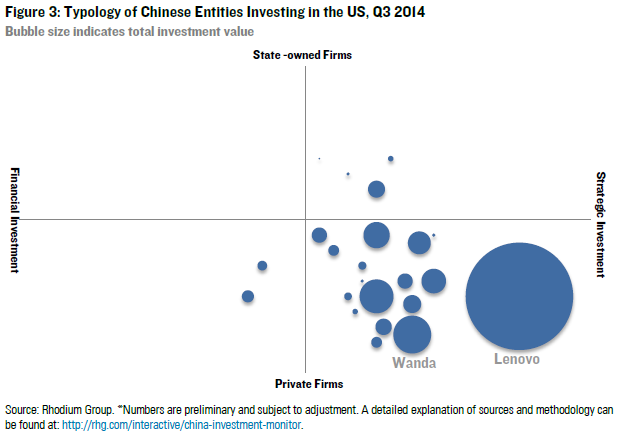 The most significant policy development in recent months was the substantial relaxation of China’s outbound FDI policy framework. In December 2013, the State Council released an update to the “Government Approval of Investment Projects Catalog”, which ordered its bureaucrats to significantly liberalize outbound FDI policies. In April, the National Development and Reform Commission (NDRC) implemented this directive and announced new rules that abolished NDRC approval requirements for non-sensitive investments below $1 billion. In September, the Ministry of Commerce (MOFCOM) followed with rules that abolish MOFCOM approvals for outbound investments, except in a few exceptional cases (sensitive countries and industries). The implementation of these rules means that Chinese firms now have to only register with both MOFCOM and NDRC. While there is still some uncertainty about the implementation of the new rules and the potential that new measures to curb illicit capital outflows will be taken by the third relevant regulator, the State Administration of Foreign Exchange (SAFE), these changes represent the most significant liberalization for Chinese outbound investment in the past decade. The new framework will allow Chinese firms to close deals quicker and without government interference, which will help sustain recent OFDI growth, especially from the private sector. In October, the State Council pledged to go one step further and abolish OFDI approvals altogether in the next update of the investment approval catalog.

In the United States two lawmakers have recently come forward with legislative initiatives that would significantly raise the barriers for foreign investors in the United States, both of which make explicit reference to growing Chinese investment. Senator Debbie Stabenow (D-MI), Chairwoman of the Senate Agriculture Committee and vocal opponent of last year’s Shuanghui-Smithfield acquisition, announced that she was drafting legislation to toughen the review of foreign investment in the US food sector. Congresswoman Rosa DeLauro (D-CT), also an outspoken critic of the Smithfield transaction, introduced a bill that would expand the mandate of CFIUS to screen greenfield projects in addition to acquisitions, and to apply a “net benefit” test considering factors other than national security. Both initiatives need to be seen in the context of the current Senate campaign season, and the chances of them getting enough political support are slim. However, they illustrate the growing importance of economic concerns about Chinese investment in Washington, which, in combination with negative sentiment regarding Chinese market openness (see recent complaints about the discriminatory application of Chinese anti-monopoly laws) and brewing trade frictions (see the record trade surplus and surge of steel exports), could lead to more headwinds for Chinese deals in coming months.

More than $10 billion worth of Chinese deals are currently pending, including the acquisition of Motorola Mobility by Lenovo ($2.9 billion), the sale of the Waldorf Astoria hotel ($1.95 billion) to Anbang, and a number of large-scale greenfield projects (including three methanol plants with a combined capital expenditure of nearly $5 billion). Moreover, we expect more deals in commercial real estate as several prominent Chinese developers are preparing to venture into the US market later this year. This strong pipeline makes it likely that total deal value will reach double digit territory for the second year in a row in 2014, following last year’s record $14 billion.