The United States remains a major target of Chinese outbound investment activity, with $12 billion worth of deals completed in 2014. This note reviews investment and policy trends from Q4 in the context of full year 2014 trends.

Q4 deals reach $3.7 billion: The closing of Lenovo’s acquisition of Motorola drove the value of completed US transactions by Chinese firms to $3.7 billion for the quarter.

Second big year in a row: Chinese investment over the past 12 months totaled $12 billion, topping the $10 billion mark for the second year in a row. The number of M&A transactions reached a new all-time high in 2014, as smaller sized deals and financial stakes are becoming an important driver of investment activity.

Strong base for 2015: The outlook for 2015 remains very strong, with more than $3 billion in deals currently pending and several large, multiyear greenfield projects in real estate and other sectors started in 2014.

If you are interested in receiving a proprietary version of this note including full transaction details, please contact us. 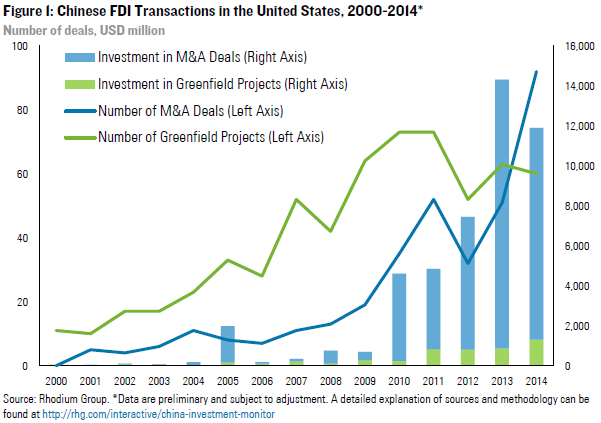 In Q4 2014, Chinese firms spent $3.7 billion on 30 FDI transactions in the United States. We count 18 acquisitions that are together worth $3.4 billion and 12 greenfield projects totaling $272 million. This brings total Chinese investment for last year to nearly $12 billion. The number of acquisitions reached an all-time high of 92 in 2014, three times as many as in 2012. Major drivers of this jump are the recent growth of financial investments and acquisitions in commercial real estate. Total spending on greenfield investments also reached a new record high of $1.3 billion in 2014, with another $12 billion worth of spending in the coming years if announced multiyear projects proceed as announced. 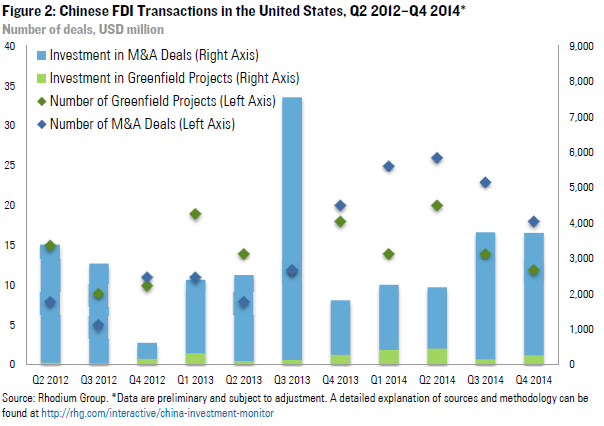 The closing of Lenovo’s purchase of Motorola ($2.9 billion) made information and communications technology (ICT) the most important sector in Q4. For 2014, the ICT industries accounted for 48% of total spending, including Lenovo’s two megamergers and a series of smaller deals (for example Playdots, Nok Nok, and Misfit Wearables). The second biggest sector in 2014 was real estate and hospitality, where the $3.1 billion in investments surpassed last year’s $2.2 billion (note that we have lower numbers for real estate investment than other sources, as we log announced multiyear projects incrementally – see our methodology). Two sectors that show particular momentum in the past six months are food (see New Hope Group’s investment in Ruprecht Co. and Yili’s milk powder production facility in Kansas), and pharmaceuticals and biotech (see Unitao’s investment in the former Boehringer Ingelheim plant in Virginia and the investment in  BioNano Genomics).

The biggest loser in 2014 was the energy sector, with a five-year low of just $333 million worth of deals. While large-scale, state-owned activity remains subdued globally, the recent drop in oil prices could bring energy deal-making back to life in 2015. A few recently announced deals (see oil field acquisitions by Meidu) indicate that financial players and private buyers could take a greater role in driving China-US energy deals in coming months. 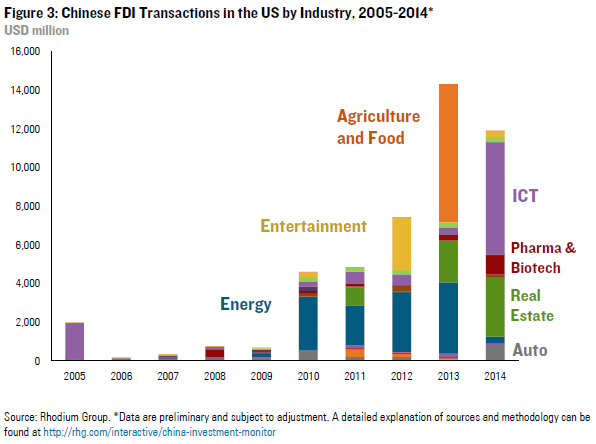 In Q4, the biggest deal was Lenovo’s acquisition of Motorola, emblematic of the dominance of private investors in this space. In 2014, private sector players accounted for 76% of transactions and 81% of total deal value as investments by state-owned firms and sovereign players dropped sharply. Still, state-owned entities remained important for a few growth sectors, most importantly real estate. 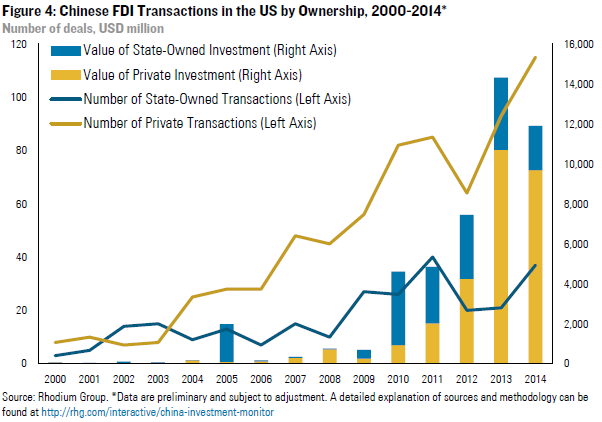 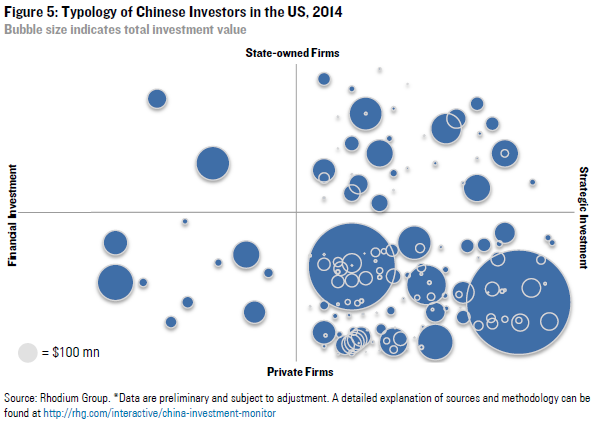 In Q4, China’s bureaucracy continued to push forward on the liberalization of outward FDI approvals. In October, new regulatory measures on outbound investment by the Ministry of Commerce (MOFCOM) went into effect, eliminating approval requirements for non-sensitive outbound FDI. In November, the State Council published a new Catalog of Investment Projects Subject to Governmental Approvals, which abolished National Development and Reform Commission (NDRC) approval requirements for projects of $1 billion or more. In December, the State Council announced several measures aimed at providing stronger financial support for outbound investment, including lifting the OFDI foreign exchange pre-registration requirement with the State Administration of Foreign Exchange (SAFE). While these reforms suggest aggressive changes to benefit outbound investors are being made, there still appear to be great difficulties in implementing them. Anecdotal evidence suggests that the current design of the registration process still gives bureaucrats significant room to delay and even block outbound deals in non-sensitive sectors, as requirements and criteria are not fully codified and transparent. It remains to be seen whether new initiatives by the State Council to streamline and codify administrative processes will help to improve the situation.

One of the risks the implementation of a more liberal OFDI regime faces in 2015 is China’s battle against speculative capital outflows. Capital outflows appear to have accelerated in recent quarters, amid changes in global monetary policies and other factors (Figure 6). A more liberal OFDI framework provides an additional venue for capital outflows and the outbound investment patterns of the past six months indicate that some hot money is leaving China through the OFDI channel. SAFE has announced additional measures to crack down on illicit cross border capital flows, focusing on the areas with most rampant abuse (such as lending and trade invoicing). But if signs of illicit outflows through the OFDI channel continue to grow, we could see backpedaling on some of the recent liberalization efforts. 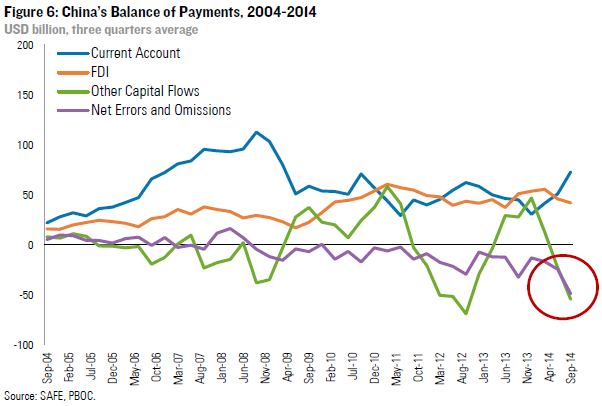 US: Progress on BIT and CFIUS precedent

During meetings in November and December, US negotiators made significant progress in finalizing the principle text for a bilateral Investment treaty (BIT) with their Chinese counterparts. This means that negotiations are now entering the hot phase of agreeing on a “negative list” of restricted sectors. Disappointment with recently announced FDI reforms, for example the 2014 Shanghai FTZ negative list and a draft for a new foreign investment catalogue, illustrate that there is a large gap between US expectations and Chinese readiness to open up additional sectors to foreign investment.

With regard to national security review procedures, the Committee on Foreign Investment in the United States (CFIUS) in November delivered a cache of unclassified documents to Chinese-owned Ralls Corporation after a court ruling found that the Obama administration denied Ralls its constitutional right to due process in 2012. While this was an unprecedented win for Ralls, its impact on future Chinese investments will be limited, as the court did not question the authority of the President or CFIUS to block foreign investment on national security grounds. Legal procedures in the coming months will offer more clarity on the extent to which the Ralls decision may affect future CFIUS investigations with regard to due process rights of foreign investors.

At the beginning of 2015, more than $3 billion of deals were pending or announced, among them the $1.95 billion sale of the Waldorf Astoria hotel in New York to insurance company Anbang. A flurry of real estate developments across the country has driven the number of multiyear greenfield projects to a new record high, with combined announced investments of more than $12 billion in coming years. Absent political headwinds, outbound investment by Chinese firms will continue to boom in 2015 and the United States will remain a key market.