Chinese investment in the United States doubled in 2013, driven by large-scale acquisitions in food, energy and real estate. Private firms are now dominating capital inflows, accounting for more than 80% of transactions and more than 70% of total transaction value. We expect Chinese interest in US assets to remain strong in 2014 because of aggressive economic reforms in China, a more liberal policy environment for Chinese outbound investors, and a positive outlook for the US economy. This note recaps the key trends of Chinese investment in the US in 2013 and outlines our view for 2014.

1. More transactions, bigger deals: After a 36% drop in transactions in 2012, the number of Chinese US deals trended up again in 2013. We count a total of 82 investments, split between 44 acquisitions and 38 greenfield projects (though the number of greenfield investments will likely be upward-revised in coming months). At the same time, the average size of projects increased, lifting the total deal value to a new record high of $14 billion, double the amount of the previous year (Figure 1). The top six transactions (Smithfield, Nexen US, Mississippi Lime JV, Chase Manhattan Plaza, General Motors Building, Wolfcamp Shale) account for more than 80% of total combined value. 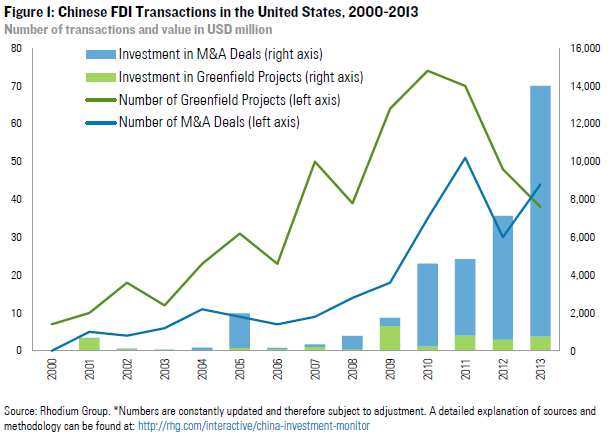 2. Food, energy and real estate were the big-ticket items: Previously not a major recipient of Chinese capital, the food sector was the top target in 2013 due to the $7.1 billion Smithfield takeover (Figure 2). Investment in the unconventional oil and gas boom continues to be a major driver of Chinese FDI in the US, with projects worth $3.2 billion concluded in 2013 (including CNOOC’s acquisition of Nexen’s US operations, Sinopec’s Mississippi Lime joint venture with Chesapeake, and Sinochem’s stake in the Wolfcamp Shale). Commercial real estate became a hot sector in 2013 with 18 investments worth $1.8 billion, among them projects in San Francisco (LUMINA), Los Angeles (Sheraton Gateway), New York (GM building, Chase Manhattan Plaza) and Detroit (Detroit Free Press and David Stott buildings). Chinese interest in advanced manufacturing, services and consumer products continued to be strong, but the deals were mostly small and medium in size. Big winners in 2013 were healthcare and biotech (Complete Genomics, Saladax, Zonare) and new energy (A123, MiaSole, Global Solar, Satcon, Ralls). The RHG China Investment Monitor provides a detailed breakdown of all deals in 2013 by industry and geography. 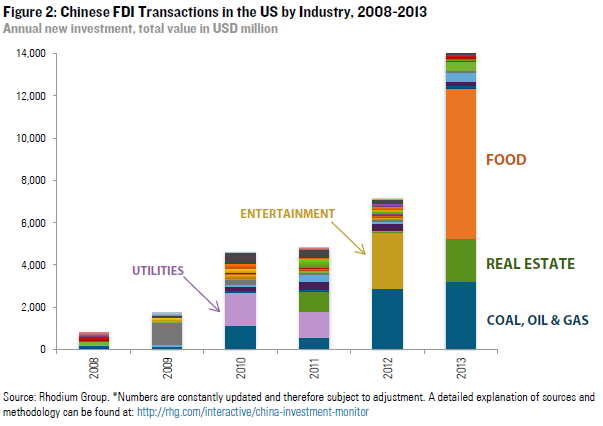 3. Private firms now dominate Chinese capital inflows: Private firms have always accounted for the vast majority of investments in the US – on average, more than 70% in the past five years – but their share in total investment value remained comparably small, given the dominance of state-owned firms in capital-intensive sectors like energy or utilities. In the past two years, private investors have taken on more medium and large-sized deals, while activity by state-owned firms has declined, remaining mostly limited to energy and a handful of manufacturing and service industries such as aviation or telecommunications. In 2012, private firms for the first time accounted for more than half of total transaction value (59%). In 2013, private firms and entrepreneurs accounted for 87% of transactions and 76% of total value (Figure 3). 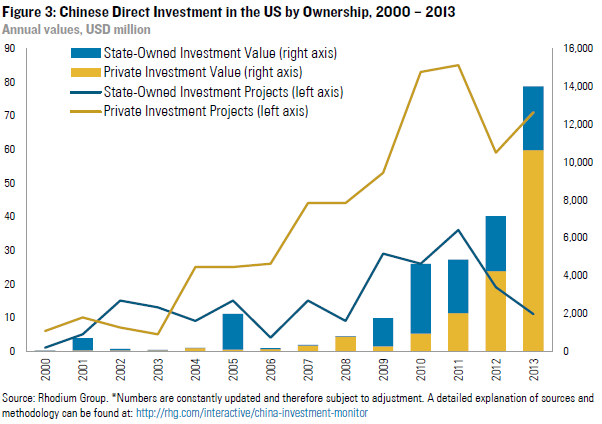 4. Chinese firms are becoming significant contributors to local economies: 2013 was a milestone for employment provided by Chinese firms in the United States. According to our count, Chinese-owned companies provided more than 70,000 full-time jobs in the United States by the end of 2013, a more than 8-fold increase compared to 2007 (around 9,000 jobs) (Figure 4). The most significant acquisitions were Smithfield (which employs 37,000 workers in the US), A123, Nexen, MiaSole and Complete Genomics. Many existing Chinese firms in the US increased local hiring in 2013, including Lenovo, Huawei, Cirrus, Blu LNG and International Vitamin Corporation. Chinese investors are also ramping up community outreach and philanthropic efforts; for example, Dalian Wanda Group gifted $20 million to the Academy of Motion Picture Arts & Sciences. 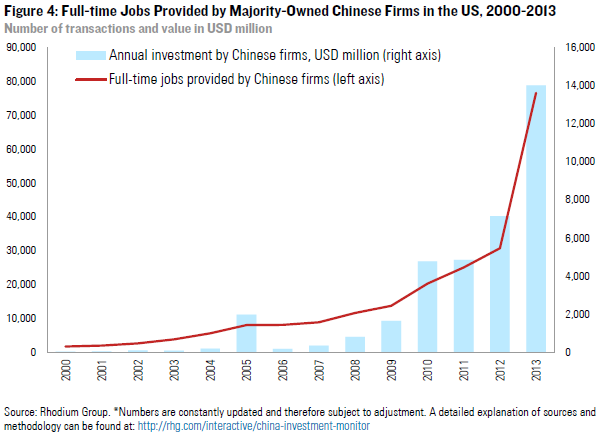 5. Most failures or divestures are related to commercial factors, not politics: National security screening remains an important consideration for Chinese investors, and recent data show that filings with the Committee on Foreign Investment in the United States (CFIUS) have increased along with growing number of deals (Figure 5). In 2013, several high-profile transactions were impacted by national security complications, including the sale of Nexen to CNOOC, the sale of A123 to Wanxiang, the takeover of Smithfield by Shuanghui, and the failed takeover of Hawker Beechcraft by Superior Aviation. However, most Chinese firms were able to successfully navigate through the CFIUS process or find mitigation solutions. Looking at all abandoned Chinese acquisitions and divestures in 2013, plain vanilla commercial factors were the most important reasons for failure, including disagreements over terms and price (Lenovo-IBM x86 server assets, CDB-Lennar), concerns about commercial viability on the buy side (Dongfeng/Geely-Fisker), difficulties with financing (Chinese consortium-ILFC), legal complications (Sinovel exit), or industry down-cycles (Suntech shutdown). 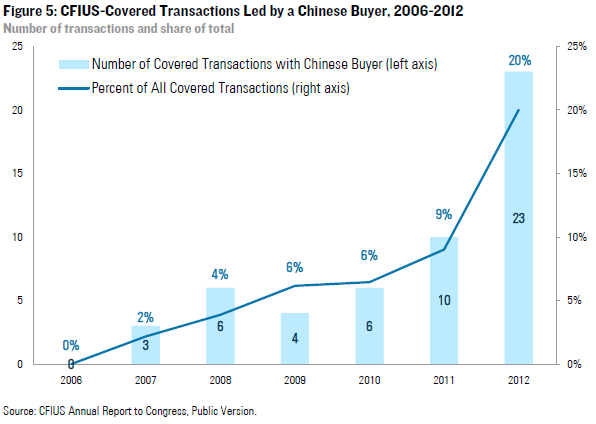 1. Chinese reform agenda further increases commercial OFDI rationale: The growth of Chinese investment in 2013 and previous years was mostly driven by changing commercial realities in the Chinese marketplace. The aggressive reform package unveiled after the Third Plenum will further expand the rationale for Chinese firms to go global. The linchpin of President Xi Jinping’s new reform program is letting the market allocate resources, which will affect the pricing of many input factors. With rising costs and a stronger yuan exchange rate, Chinese firms must adjust their business models, moving up into higher value-added products and down the value chain to capture margins closer to consumers. Going abroad is key to this adjustment. Offshoring low-value-added activities to other countries, acquiring brands and technological capabilities, and directly serving customers in overseas markets all require FDI. Another major driver for China Inc. to go abroad is to strengthen competitiveness at home, and this pressure will only increase if the government follows up on its promises to improve conditions for private firms and open up new industries to foreign investment.

2. Firms will have more freedom to invest overseas: There are also strong signals that Beijing will speed up the liberalization of the outward FDI policy environment. Private-sector Chinese companies in particular currently face a complicated approval process for outbound investment, which often involves multiple bureaucratic entities with different interests and priorities. This process delays decisions, increases deal risk and puts Chinese firms at a disadvantage in competitive bidding processes. The reforms laid out in Beijing would eliminate some of these hurdles, leaving the decision of whether to make direct investments abroad in the hands of businesses. In December, a notice by the State Council indicated that China will cut back the role of the National Development and Reform Commission in the OFDI approval process, an important first step towards a more liberal and less bureaucratic regulatory environment.

3. The US continues to be an attractive place for China’s new generation of outbound investors: With its large market, educated workforce and world-leading technology and brands, the United States has strong appeal to the next generation of Chinese outbound investors. The bipartisan budget deal and a positive medium-term outlook for the US economy are further bolstering the attractiveness of the US as investment destination in 2014. And while company valuations have gone up due to loose monetary policy, M&A deal-making activity has only grown moderately from post-crisis levels (Figure 6). A less aggressive M&A environment is positive for Chinese buyers, as their lack of experience and the burdensome approval system in China limits their readiness to compete head-to-head with domestic or other foreign firms for US assets. 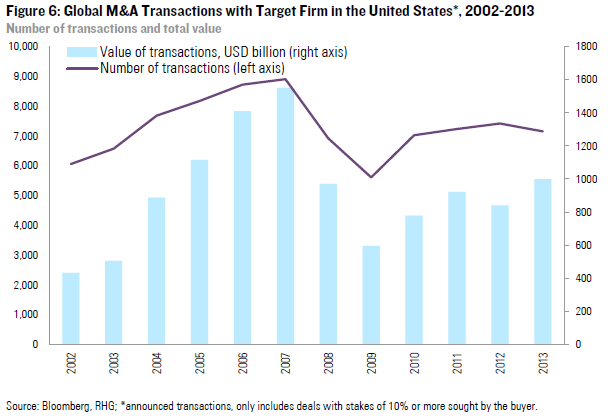 4. Several political risks threaten a positive 2014 OFDI outlook: For one, China’s economic and political reforms contain elements that could negatively affect overseas investment in some circumstances. Capital discipline on state-owned enterprises imposed through higher dividend payments and market-driven interest rates may reduce their outward investment and create volatility, particularly in energy and metals. A second risk is that Beijing chokes back on capital account liberalization out of fear of a major crisis on the road to rebalancing. Structural reforms, including financial sector opening and capital account liberalization, are risky, and in case of instability, China may take steps to reverse the recent course of more openness to overseas investment. New rules for individuals to report their overseas holdings could also lead to more caution, particularly in connection with a stricter line against corruption and tax evasion.

On the US side, national security remains an important factor in deal-making, and a shift toward technology assets further complicates the screening process. Moreover, the debates in 2013 have shown that the idea of an expansion of investment screening from a narrow national security focus to a broader “net benefit” test including economic considerations is still favored by some in Congress. The pace and seriousness of Beijing’s attempts to address some of the distortions in which existing concerns are rooted, including interest-rate, industrial-policy and market-access reforms, will determine the direction of this discussion going forward. The progress in negotiations over a US-China BIT and particularly Beijing’s readiness to improve market access for US firms in China will also be an important indicator for sentiment in the US towards Chinese investment and thus political deal risk in the United States outside of CFIUS.