In the first two weeks of 2016, Chinese investors already announced a flurry of headline grabbing US deals, including Haier’s $5.4 billion acquisition of GE’s appliances unit and Dalian Wanda’s $3.5 billion investment in Hollywood producer Legendary Entertainment. This note reviews Chinese deal making in the United States in the past 12 months, illustrating the dramatic shift from state-owned investment in energy to private sector FDI in services, high-tech and consumer-oriented assets.

With the release of this note, our China Investment Monitor was updated with full year 2015 data. If you are interested in a more granular perspective on Chinese FDI in the US, please contact us.

A strong fourth quarter has pushed Chinese FDI in the US to a new record level of $15.7 billion in 2015, up 30% from last year. Mergers and acquisitions (M&A) activity was particularly strong with 103 deals worth $14 billion. Greenfield investment also reached an all-time high of $1.8 billion in 2015, as several projects with large capex broke ground or made significant progress. 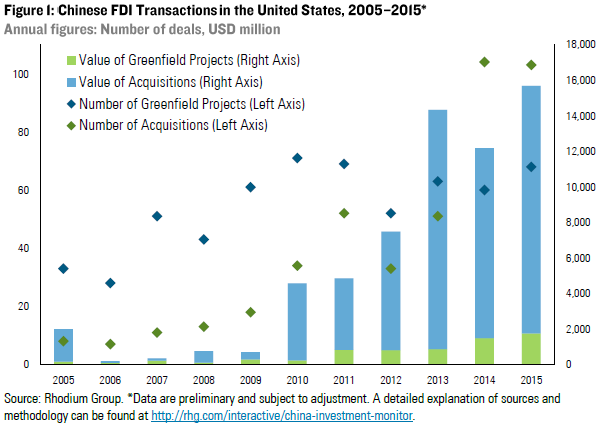 The industry composition of Chinese FDI in the US has become considerably more diverse in 2015, spreading across a wide range of sectors. The biggest industries were real estate (Anbang’s acquisition of 717 Fifth Ave), financial services (Fosun’s acquisition of Ironshore Insurance), ICT (the acquisition of Integrated Silicon Solutions Inc., by a Chinese consortium), autos (AVIC’s acquisition of Henniges Automotive), health and biotech (Hepalink’s acquisition of Cytovance Biologics), and entertainment (Wanda’s acquisition of World Triathlon Corporation). Around two thirds of total investment (64%) went into services, up from just 14% in 2009. Another notable development is a small recovery of Chinese investment in upstream oil and gas after hitting a five-year low in 2014 (Yantai Xinchao’s acquisition of oil fields in west Texas), highlighting that private sector players are looking for opportunities in the consolidation of US and global energy markets. 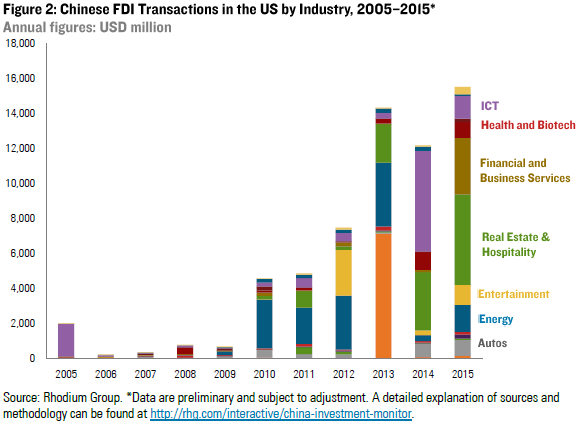 Another dramatic shift occurred in the composition of investors, with privately owned companies now accounting for 84% of total investment, up from 19% five years ago. A second major trend is the increase of financial investors including private equity firms, insurance companies, financial conglomerates, and real economy firms. Those entities accounted for 56% of total Chinese FDI in the US in 2015, up from virtually zero before 2010. 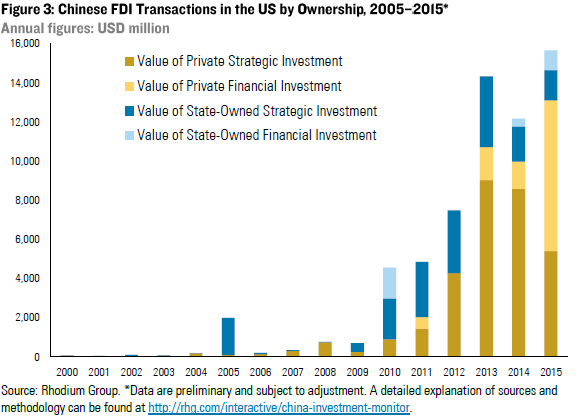 Political risk is shifting to China

A potential bid by Tsinghua Group for US chipmaker Micron triggered an intense debate about potential national security implications in the summer of 2015, but several high-profile deals have successfully cleared CFIUS review last year including in semiconductors (Integrated Silicon Solutions, Omnivision), upstream oil (Yantai Xinchao’s acquisition of oil fields in west Texas), hospitality (Waldorf Astoria) and aerospace (Aligned Aerospace, Danbury Aerospace). While Chinese investors are getting better in navigating potential hurdles at market entry, several cases in 2015 (such as AVIC’s arbitration with Tang Energy) have shown that their recent US expansion exposes Chinese companies to new legal and regulatory risks.

However, going forward, the biggest political downside risks for Chinese investment in the US are related to the political and economic environment in China. The volatility in China’s markets and continued downward pressure on the USD/CNY exchange have forced Chinese officials to further ratchet up capital controls to stop the massive outflow of capital, and there is anecdotal evidence that these measures are impacting the ability of Chinese companies to conduct cross-border FX transactions including OFDI. The other option that Chinese leaders have to resolve their current dilemma – a one-off depreciation of the CNY against the USD – could also weigh on China’s global deal making in 2016. Another emerging risk, highlighted by the temporary disappearance of Fosun Chairman Guo in December, is that China’s anti-corruption crackdown could shift to private companies, impacting their appetite for deals in the US and elsewhere. 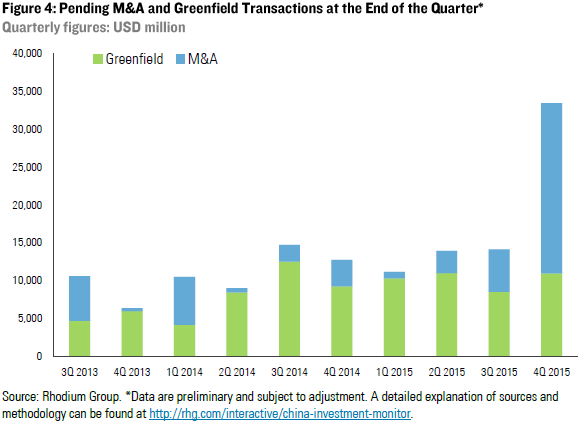