Chinese FDI in the US: Tripling Down on America

China’s global outbound investment has soared in the first half of 2016. The United States continues to be one of the top recipients of Chinese capital, with more than $18 billion of FDI in the first six months of 2016. This threefold increase from the same period last year was largely driven by private sector acquisitions in services, technology and consumer-oriented assets as well as more capital intensive greenfield projects in real estate and manufacturing.

With the release of this note, our China Investment Monitor was updated with 1H 2016 data. If you are interested in a more granular perspective on Chinese FDI in the US, please contact us.

Chinese firms invested $8.3 billion in 1Q and $10.1 billion in 2Q 2016, bringing the total value of Chinese FDI in the United States in the first half of 2016 to $18.4 billion. This is almost three times of what we recorded for 1H 2015 ($6.4 billion), and more than total Chinese FDI in the US for all of 2015 ($15.3 billion). Strong M&A activity accounted for the majority of incoming Chinese capital, with 55 completed acquisitions worth more than $17 billion. Investment in greenfield projects also remained at elevated levels compared to previous years, driven by more capital intensive projects in real estate and manufacturing. 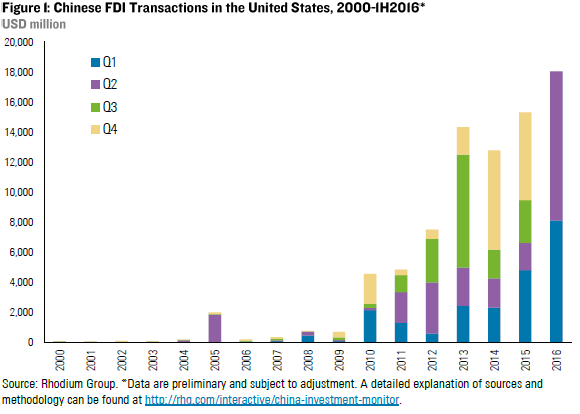 Some observers have argued that the recent surge in outbound FDI from China largely represents capital flight, as investors are trying to stash away capital in safe havens, responding to growing uncertainty about exchange rates and the economic and political outlook in China. While these factors are certainly important for explaining the latest jump in outbound investment, it is important to consider that the majority of outbound FDI still falls into the category of strategic investment.

More than 80% of all Chinese FDI transactions in the US in 1H 2016 can be characterized as strategic investments — real economy firms investing in their core areas of business. The sectors attracting the largest strategic investments were consumer goods (Haier’s acquisition of GE’s appliances unit for $5.6 billion), entertainment (Wanda’s purchase of Legendary Entertainment for $3.5 billion), ICT (acquisition of Omnivision Technologies by a Chinese consortium for $1.9 billion), and automotive (Ningbo Joyson’s acquisition of Key Safety Systems for $920 million).

Financial investments – those made primarily for financial returns – amounted to $3.5 billion, or 20% of total investment in 1H 2016. Most of those were large transactions targeting commercial real estate assets in major coastal cities (1285 Ave of the Americas, 1 New York Plaza, 61 Broadway, Park Lane Hotel, 755 Sansome Street). Private investors continued to drive investment, accounting for more than 72% of total investment in the first six months of the year. 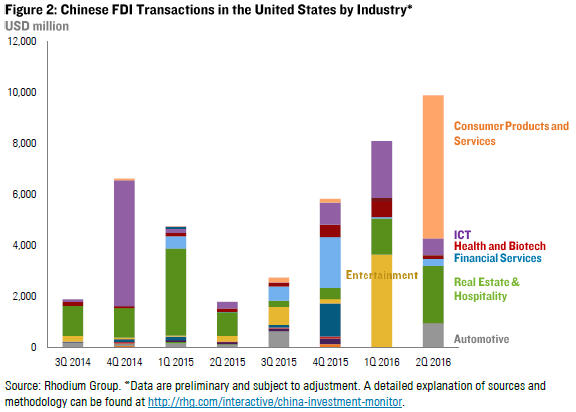 The rapid growth of Chinese outbound FDI in the first half of 2016 has triggered political reactions both in China and host economies.

In China, regulators are increasing their scrutiny on outbound investment transactions as the FDI deficit in China’s Balance of Payments has further deepened in the past six months. China’s leadership continues to pledge its commitment to further external liberalization, but concerns about capital outflows have clearly grown and SAFE and other regulators have taken informal steps in recent months to “manage” the outflow of foreign exchange. Those steps have slowed down or derailed a number of transactions have significantly increased anxiety in the marketplace about the ability of Chinese companies to close deals, driving up risk premiums and reverse break fees for Chinese buyers. 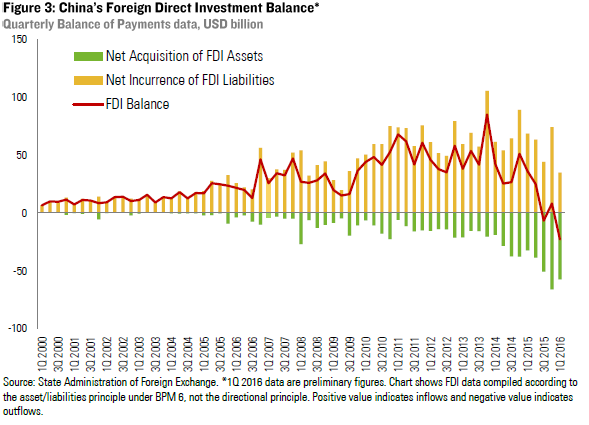 In the United States, the surge in Chinese deal making and the election cycle have caused a spike in political responses by lawmakers to individual transactions (Marco Rubio, Debbie Stabenow, Chuck Grassley, Robert Pittenger, Jackie Speier, Duncan Hunter). However, while both Hillary Clinton and Donald Trump have not been shy to take a tough stance on US-China trade relations, the topic of Chinese FDI has so far not received major attention from either presidential candidate. Greater Chinese deal making is also keeping US regulators busy, and a number of transactions has run into delays because of CFIUS and other regulatory reviews (Syngenta, Ironshore, Fidelity & Guaranty Life).

Outlook: More than $30 billion of investment in the pipeline

Several high-profile investments (among them Zoomlion’s bid for Terex and a joint venture to develop high-speed rail service between Los Angeles and Las Vegas) have fallen through in recent weeks, but the value of announced but not yet completed Chinese investments was still close to an all-time high of $33 billion at the end of June 2016.

Pending M&A transactions add up to more than $23 billion, including HNA Group’s $6 billion bid for technology distributor Ingram Micro; Anbang’s $6.5 billion acquisition of Strategic Hotels; Apex Technology’s acquisition of Lexmark for $3.6 billion; and HNA’s bid for Carlson Hotel for an estimated $2 billion. Pending investment in greenfield projects add up to $9.5 billion, mostly driven by real estate developments in New York and California, but also projects in automotive (such as Yanfeng’s plants in Tennessee and South Carolina or Faraday Future’s expansions in California and Nevada) and materials (Jushi’s glass plant in South Carolina and Sun Paper’s paper mill in Arkansas). 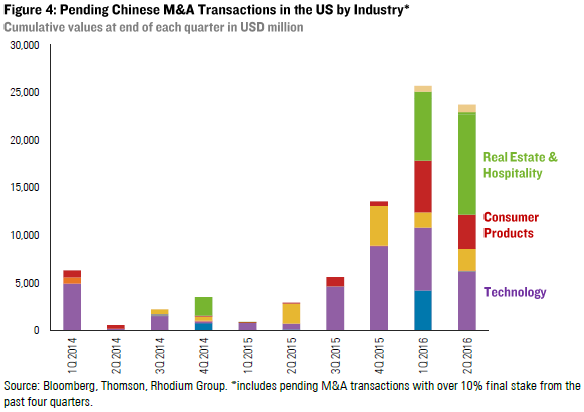 The appetite of private Chinese companies for US investments remains high, but the outbound investment patterns in coming months will critically depend on the trajectory of broader capital outflows and the response by Chinese regulators. It is reasonable to assume that recent geopolitical shocks (Brexit) and related USD strength will aggravate capital outflows in coming months. This makes it likely that regulators will continue or even increase scrutiny of outbound FDI transactions, particularly for deals involving large amounts of foreign exchange and those with a “financial” nature.

Another major political risk is that the slow pace of economic reforms in China and the lack of progress in further opening up the Chinese market to foreign investment will trigger a more intense popular backlash against Chinese FDI in host economies. The recent wave of Chinese acquisitions has already intensified debates about asymmetries in market access in many parts of the world (see Europe’s latest reciprocity push), which could further aggravate if BIT negotiations and other initiatives in the run up for the G-20 summit in Hangzhou in early September do not yield the expected results.