Raising Climate Ambition: How a 50-52% US NDC Compares with Other Advanced Economies

On April 22, the Biden administration announced an updated US nationally-determined contribution (NDC) under the Paris Agreement, establishing US greenhouse gas emission reductions over the next decade and setting the course for a net-zero economy by 2050. As host to the Earth Day Leaders Summit, the US is using this announcement to leverage further ambition by the world’s major economies, with the aim of limiting warming to 1.5° Celsius. Civil society groups and a coalition of hundreds of governors and mayors had been calling on the Biden administration to adopt a 1.5°C-consistent NDC of reducing emissions by at least 50% below 2005 levels by 2030. Ultimately, the Biden administration announced an NDC of 50-52% below 2005 levels by 2030. In this note, we assess how the new US NDC stacks up compared to commitments announced to date by other advanced economies.

Assessing the comparability of countries’ NDCs is complicated by the fact that not all reductions are calculated from the same base year. One of the selling points of the Paris Agreement was the flexibility it provided countries to set their own nationally-determined targets, including the selection of a base year. Below we compare a potential US NDC of 50-52% below 2005 levels with those of other advanced economies, many of which use 1990 as their base year, to provide an apples-to-apples comparison (Figure 1). 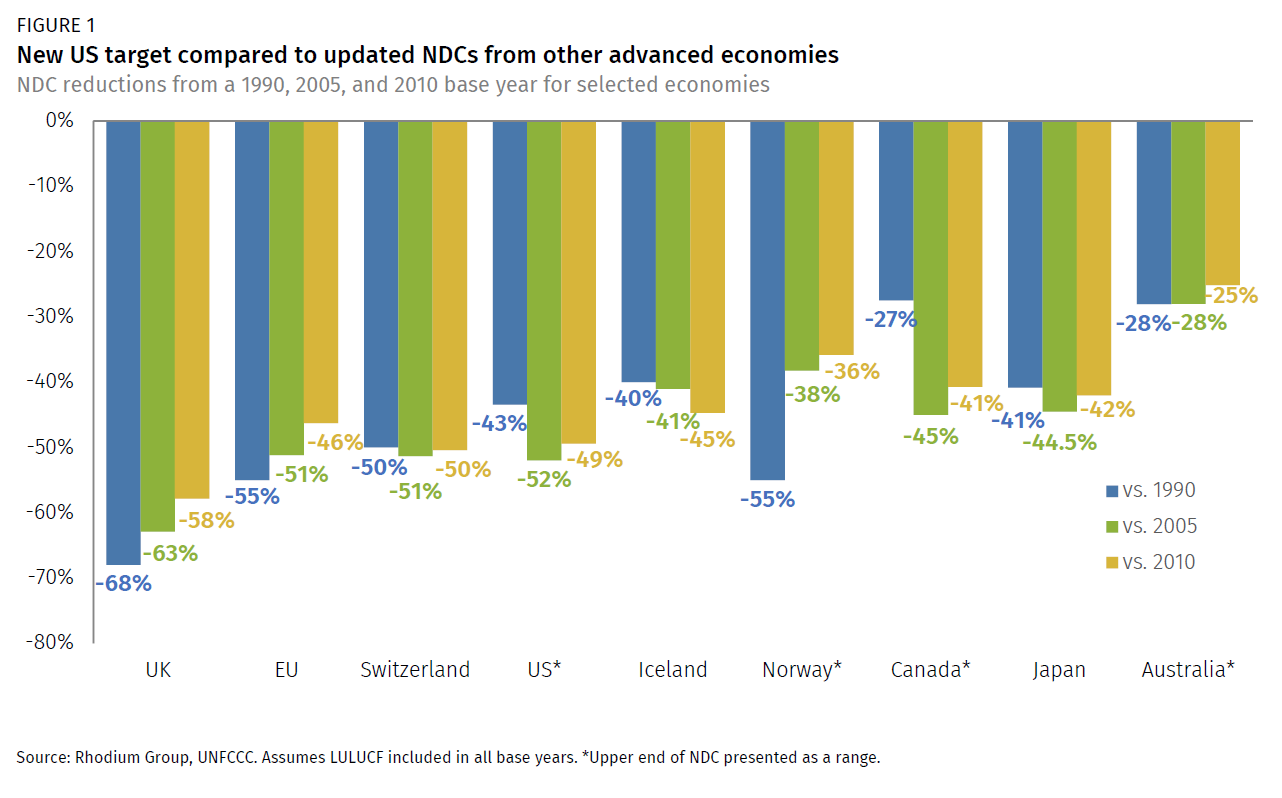 Translating current NDCs to a 2010 base year—as we do in Figure 1—also allows comparison to a benchmark set by the Intergovernmental Panel on Climate Change (IPCC) for global emission reductions consistent with limiting temperature rise to 1.5° Celsius. In its Special Report: Global Warming of 1.5°C (2018), the IPCC estimated that global CO2 emissions would need to decline at least 45% below 2010 levels to remain on track for 1.5°C. A 52% US NDC translates into 49% below 2010 levels.