The social cost of carbon (SCC)—the cost to society from each ton of carbon dioxide emitted­—is an essential tool for incorporating the cost of climate change into cost-benefit analyses for policy and other decision-making. This month, the US Government Accountability Office (GAO), an independent federal government watchdog, reported that the SCC estimate that the Trump administration has been using is seven times lower than previous federal estimates, ignoring the best available science. White House staff from the Office of Management and Budget (OMB) told auditors from GAO that they support recommendations for updating and improving the SCC estimate from a 2017 landmark study by the National Academies of Sciences, Engineering, and Medicine. Still, no federal agency has been tasked with taking the lead on these improvements. Instead, OMB staff said they are “following” developments in SCC research by other entities, including the Climate Impact Lab.

The Climate Impact Lab is working to leverage recent advances in science and economics to develop empirical estimates of the SCC. The Lab’s comprehensive body of research, quantifying the clearest and most economically significant impacts of climate change on communities around the world, takes a hyperlocal approach—revealing that the harms caused by climate change will fall most heavily on places with fewer resources to cope. For policymakers increasingly reckoning with how to address inequality, use of the Climate Impact Lab’s forthcoming SCC in regulatory analysis will be a powerful tool for curbing the widening inequality that climate change threatens to exacerbate and will ensure that federal climate policy relies on the best available science.

Core to improving estimates of the SCC is building a better damage function, the equation that links global temperature changes to overall economic costs of climate change. Until recently, this sort of research remained siloed in academia, with a separation between climate scientists and economists, making it hard to pinpoint where and through which channels climate change could impact the economy. Pioneering research by Nobel Prize-winning economist Bill Nordhaus helped policymakers start to grapple with putting a price tag on climate change. Nordhaus’ model is one of three integrated assessment models—all predominately based on peer-reviewed studies from the 1990s and early 2000s—that formed the basis for the first US government-wide estimate of the SCC, issued in 2010.

In response to a 2015 request from the Obama White House,  the National Academies undertook an independent expert review to guide future revisions of the SCC. The study recommended a framework for ensuring the SCC incorporates the latest scientific advances, noting that researchers had come a long way in their ability to identify the impacts to specific sectors of the economy or drill down on specific regions. With a holistic, detailed picture of how much climate matters to society’s well-being, policymakers would be better equipped to make decisions about how much to invest toward mitigating CO2 emissions.

One example of such detail comes from a 2017 study published in the journal Science, in which members of the Climate Impact Lab studied the relationship between climate change and the US economy, calculating impacts across six categories for 3,143 counties. That research shows falling labor productivity and crop yields, and rising mortality and crime rates, as especially pronounced hazards for hot counties in the South and lower Midwest—where incomes are below the national average. Colder and richer counties in parts of New England and the Pacific Northwest appear poised to benefit from milder, less deadly winters. For each possible future warming scenario, the study builds a projection of the value of impacts and adds up those costs, sector-by-sector. What emerged is evidence that end-of-century climate impacts under a scenario of continued high emissions would make the US hotter, poorer, and more unequal (Figure 1). 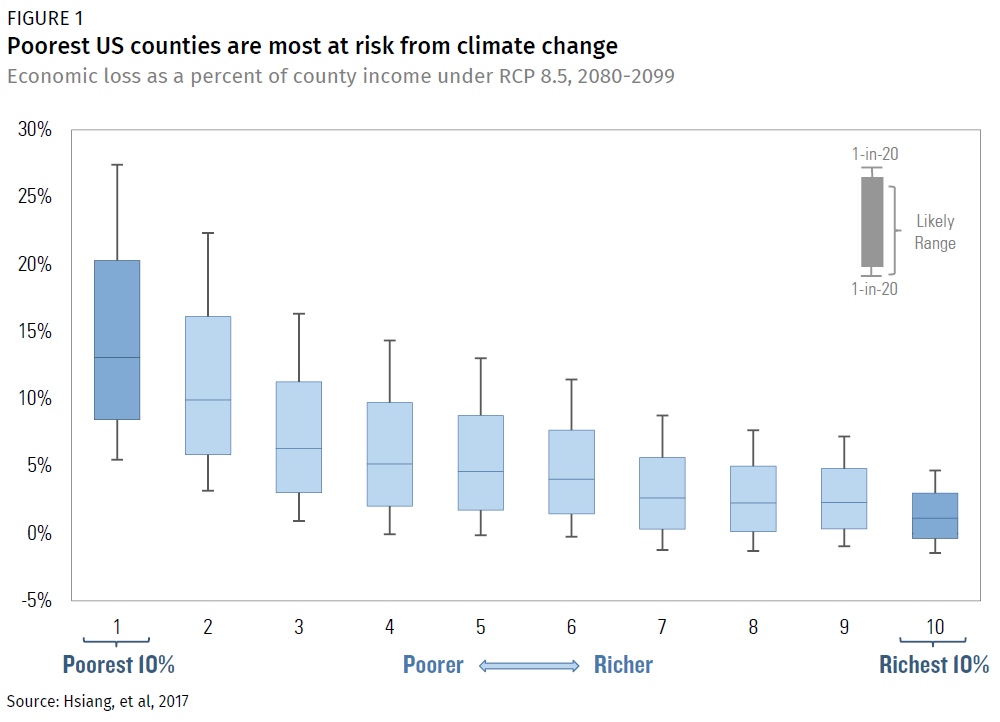 If global temperatures rise 4° Celsius by 2100, the study found the US economy could shrink between 1.6% and 5.6%. But the climate hazards and economic impact vary widely by county. For the richest 10% of counties, under a scenario of continued high emissions, the likely (66% probability) outcome ranges from a 3% loss and 0.4% gain in income by the end of this century, relative to a future where the climate is not changing. In the same scenario, for the poorest 10% of counties, climate hazards threaten a loss of 9% to 20% of their income. This sort of precise picture of the way risks are distributed shows how national and global estimates tend to mask vast disparities in impacts. Overall, the research found that, in the US, the poorest suffer the most damages from these six impacts.

Updating and improving the SCC requires zooming out and shifting the focus to global climate damages. Worldwide, a disproportionate share of the burden falls on those with the lowest incomes. Forthcoming global research by the Lab—highlighted in the GAO report—illustrates these disparities and provides the framework for an improved SCC, one that can be used to solve for climate policy with more equitable outcomes.

To understand the climate’s influence on the economy, the Lab combs through terabytes of rich, real-world data to find the historical relationship between temperature, precipitation, or other climate variables and economic activity—from energy demand, to crop yields, to hurricane damage. Then, the Lab pairs this economic research with complex global climate models, developed by international modeling teams, to come up with a much more granular and evidence-based estimate of how climate change interacts with the economy in 24,378 distinct regions and what’s projected in the future under a range of different emissions scenarios.

What becomes evident is that the impact of climate change depends very much on where you live, your starting climatology, and the composition of your local economy. This picture is missing from the three models underlying the current SCC calculations—the models don’t capture the distribution of damages between the world’s countries or disparities within each country. Of the three, the model with the highest level of geographic detail only divides the globe into 16 regions and calculates impacts separately for each.

In the US research described in the previous section, we demonstrated how a policymaker might use the granular relationships captured in our findings to value climate damages, wielding the SCC to craft solutions to climate change that are equitable to low-income populations. Based on an economic concept called inequality aversion, policies can be designed with a preference for fairness and used to hedge against the least equitable outcomes. Looking only at climate impacts within the US, we find that applying inequality aversion to prioritize the well-being of the poorest counties tends to increase the SCC’s value, tipping the scale towards mitigation.

Mapping the impacts only within US borders would miss international consequences, such as impacts to global trade or migration, with major implications for national interests. One of the key assumptions underlying the Trump administration’s SCC values is that only domestic damages count, dismissing these costs. GAO found these estimates do not align with National Academies’ recommendations for incorporating the best available science. This math not only tips the scale toward deregulation but also ignores the unequal way the world will be impacted by climate change. What’s more, the Lab’s initial findings make aggregate US climate damages appear relatively mild compared to climate impacts worldwide. Globally, in a future with countries least responsible for emissions suffering the most from their effects, an SCC value that incorporates inequality aversion could be used to design policies that address this injustice.

The Climate Impact Lab is working collaboratively to ensure recommendations from the National Academies are implemented. The Lab has partnered with Resources for the Future’s Social Cost of Carbon Initiative, another research entity highlighted in GAO’s report, as well as the U.S. Climate Alliance and the governments of Canada and Mexico to promote opportunities to use the SCC across a wide range of policy applications. Together, these efforts will help guide policymakers on how to use the best available science to craft more equitable climate policy.