This week the New York Times published a series of maps showing Americans’ attitudes on climate change. The maps use extensive survey data recently published by the Yale Program on Climate Change Communication. We analyzed that data to see what explains differences in Americans’ belief in whether humans’ role in changing the climate and whether policymakers should take steps to address it. One factor came through loud and clear. People’s belief in climate science tightly correlates with how they voted in the 2016 Presidential election. While the partisan nature of climate change has been understood for some time, the new Yale data shows just how polarized the issue has become.

The new Yale data takes results of a nation-wide survey of more than 18,000 adults, and feeds them into a statistical model, along with demographic data from the Census, to produce state and county-level estimates. To validate the model, the Yale team conducted independent surveys in four states and two metropolitan areas and found a 2.9% and 3.6% variation respectively – within the survey’s margin of error. They asked respondents 17 questions about their views on climate science, the impacts of climate change, and their level of support for a various policy responses. We took the county-level data from the Yale survey and compared it to county-level election results from the 2016 Presidential race. We found that 86% of the variation across counties in respondent’s belief that “global warming is mostly caused by human activity” is explained by the linear relationship between that and voting preference (Figure 1). 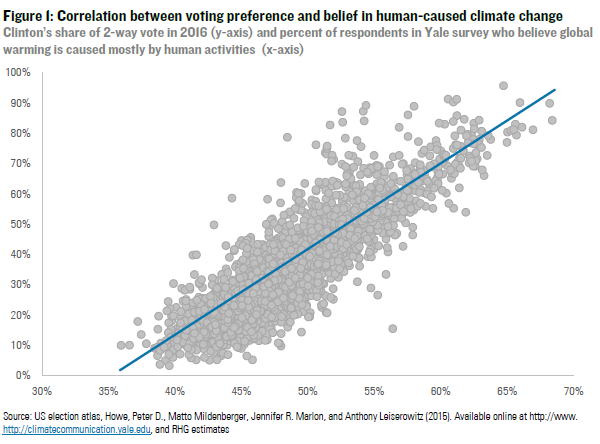 It’s even more compelling in map form. We’ve shown the 2016 Presidential election results in Figure 2 and belief in human-caused climate change in Figure 3 using the same color palette.  Researchers have been tracking the growing partisan divide on climate change for a while, but the Yale data make it particularly stark. 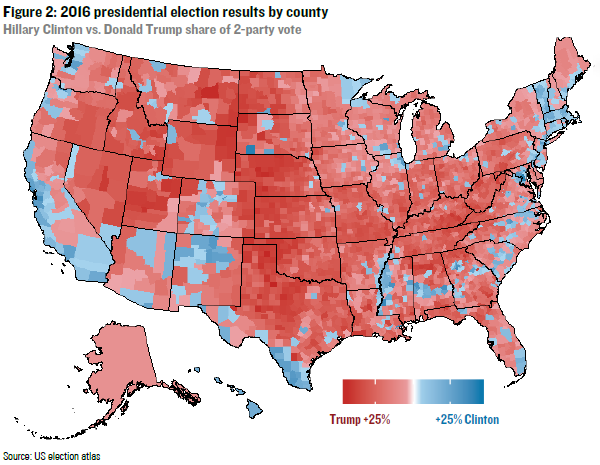 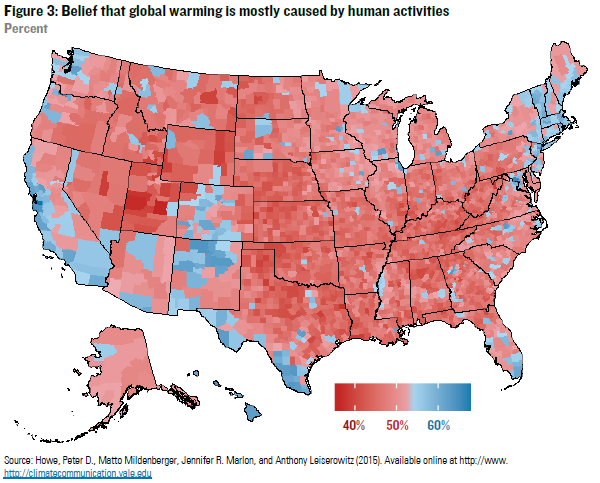 The Partisan Divide extends to Solutions as well as Science

Nation-wide, only 53% of Americans believe that human activity is the primary cause of climate change in the Yale survey. A larger share of Americans support strict CO2 limits on existing power plants like the Clean Power Plan (69%) and requiring utilities to purchase 20% of their electricity from renewable sources (66%). But while the average level of support is higher, support for these policies is still highly partisan in nature. The Voter preference in the 2016 Presidential election explains 83% of the cross-county variation in both instances (Figure 4). 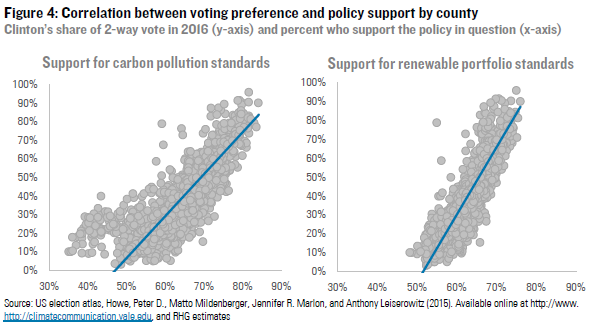 Is there a Cure for Climate Partisanship?

Is there any hope for bipartisan cooperation on climate change given the current partisan divide? One thing we learned from the 2016 election is that voters’ attitudes on specific issues can shift dramatically to follow those of their party’s standard bearer. See, for example, the sharp decline in Republican support for free trade agreements after Trump started campaigning against them (Figure 5), or the increase in Vladimir Putin’s favorability rating among Republicans  following Trump’s election.

Could Trump force the same about-face on climate by coming out as an environmental champion? We aren’t holding our breath. His administration has proposed devastating cuts to the EPA and climate change research programs across other federal agencies. Last week he re-opened Obama’s fuel economy standards for cars and light trucks for review.  On Monday at a campaign-style rally in Kentucky, Trump promised a new Executive Order to roll back other Obama-era climate policies. And on Tuesday the White House threw cold water on speculation they were entertaining a carbon tax. If the Republican rank-and-file are going to have a change of heart on climate, it’s probably going to have to come from somewhere else. 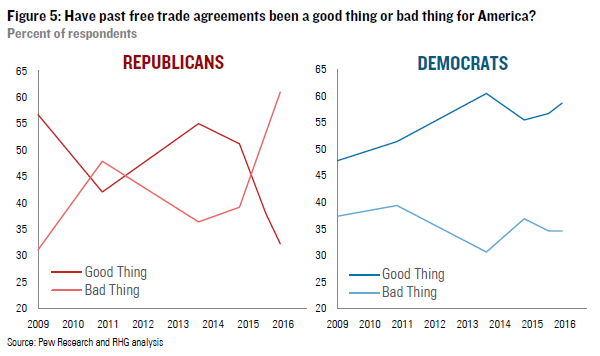