Made by China – in America?

Last week China’s Shandong Tranlin Paper company announced an investment of up to $2 billion in a paper and fertilizer plant in Virginia, which is expected to create 2,000 local jobs by 2020. This is the latest example in a series of manufacturing investment announcements by Chinese firms in America. This note explores why local US production is becoming a real option for some Chinese firms and outlines the opportunities ahead.

Few incentives for overseas production under the old growth model: With a focus on labor-intensive products and competitive cost structures at home, Chinese firms had little incentive in the past to invest in US production – with the exception of avoiding punitive tariffs and other trade barriers.

New commercial and political realities make overseas manufacturing a viable option for some firms: Technological catch-up, rationalization of pricing structures for input factors, and the push into new product markets has increased the rationale to localize production in overseas markets. Greater political freedom for firms to invest overseas is another important driver of this new trend.

For the past three decades, American firms have used foreign direct investment (FDI) to outsource manufacturing activity to China and tap the country’s cheap labor, economies of scale, and other cost advantages. In the past five years, Chinese FDI in the US has grown rapidly and by most measures now exceeds flows into the other direction. Initially Chinese FDI was mostly targeting extractive industries (unconventional oil and gas) and assets such as real estate or utilities. However, the mix has become more diverse in the past three years, and Chinese interest in acquiring or building US manufacturing operations has increased significantly.

Acquisitions account for the bulk of Chinese FDI coming to the US. Energy, real estate, and utilities were the biggest draw for Chinese investors since the mid-2000s. Recently, Chinese firms have ramped up merger and acquisition (M&A) activity in areas such as high-tech products and consumer goods, which often involve local US manufacturing capacity. The number of acquisitions of US firms with local manufacturing operations has increased, from just 2-3 per year before 2008, to 8-10 in recent years. Moreover, the average size of these deals has grown dramatically, and Chinese firms are now spending hundreds of millions of dollars on firms with a substantial manufacturing presence in the United States (Figure 1). The most prominent acquisitions that include local production facilities are Smithfield Foods in 2013 (food processing), Nexteer Automotive in 2010 (auto parts), A123 Systems in 2013 (advance batteries) and Cirrus Industries in 2011 (aerospace). 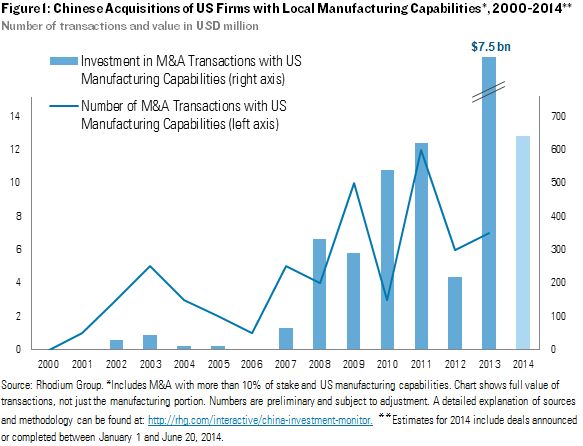 Perhaps more importantly we have also seen a substantial increase in Chinese spending on new manufacturing facilities (so-called greenfield projects) and on expanding manufacturing capabilities at existing US subsidiaries. The number of yearly greenfield projects and expansions has jumped from virtually none to 5-9 in recent years, and the annual average investment value grew to more than $300 million in past three years (Figure 2). The most prominent greenfield projects are Tianjin Pipe’s plant in Texas (steel pipes), Keer Group’s factory in South Carolina (cotton yarn), Sany America’s facility in Georgia (construction machinery), and Golden Dragon’s plant in Alabama (copper tubing); prominent expansions include Nexteer Automotive in 2011 and Cirrus Aircraft in 2012. 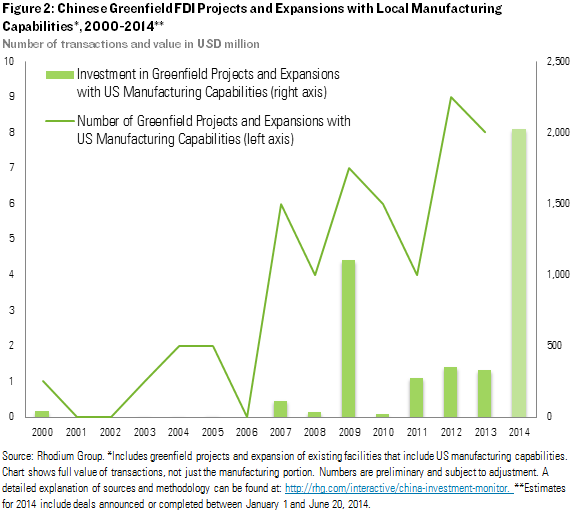 What Is Driving This Increase?

This increase in Chinese interest in US manufacturing is driven by a mix of motives. Similar to Japan in the 1980s, some Chinese companies feel pressure to localize production due to punitive tariffs and other trade barriers. More recently, the normalization of input factor pricing, changes in the product mix, and greater political freedom has incentivized Chinese companies in a broader set of sectors to think about local production in the US market.

Tariff-jumping FDI is concentrated in sectors with punitive tariffs and informal market access barriers. A slew of companies in metals manufacturing localized production after the US imposed anti-dumping and countervailing duties on a range of metal products including steel pipes (Tianjin Pipe’s $1 billion plant in Texas), primary aluminum and extrusions (Nanshan America’s $100 million aluminum plant in Indiana), and copper piping (Golden Dragon’s $100 million precision copper tubing manufacturing facility in Alabama). Examples of projects incentivized by informal trade barriers include Suntech’s assembly facility in Arizona to comply with a “buy local” provision, and BYD’s local assembly plant for electric busses in California, in anticipation of winning contracts from local transportation authorities. 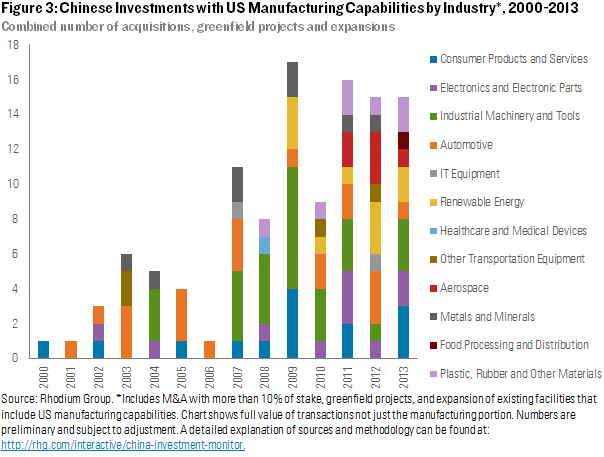 One important development is the ongoing transition from labor-intensive manufacturing to a more advanced industrial structure. As the costs of labor and other input factors are increasing, the era of low-end manufacturing is coming to an end. Chinese firms are making strategic overseas investments to upgrade technology, gain access to talented staff, and complement low-end facilities at home with advanced manufacturing capabilities overseas (often combined with R&D activity). This mostly happens through the acquisition of existing companies and assets (for example A123 Systems in Massachusetts), and the post-M&A expansion of local advanced manufacturing capabilities (Cirrus Aviation in Minnesota or Nexteer Automotive in Michigan).

Chinese firms not only face higher labor costs, but a gradual normalization of other input factor costs. In order to rationalize its economic structure, China is gradually removing price controls, subsidies, and other distortions to market-based prices. This is fundamentally changing the cost for input factors such as such as land, natural resources, electricity, and environmental protection. Firms that are already feeling the pressure from these changes, or that are anticipating these new realities, have a strong incentive to streamline their global value chains and outsource production of such goods to markets with a natural comparative advantage. One recent example is a new facility for recycled polyester staple fiber products created by JN Fibers in South Carolina. The firm cited lower costs for energy and land as the primary motivators for shifting from imports to local production. Other projects with similar considerations include Keer Group’s $218 million cotton yarn production facility in South Carolina and the announced $230 million production facility for Fuyao Glass in Ohio.

Aside from technological catch-up and changing cost structures, another powerful incentive for Chinese firms to localize production in large overseas markets like the US is because local presence helps them to sell higher value-added products to customers, while at the same time leveraging foreign brands back in the Chinese consumer market. Selling textiles and toys in the US market did not necessarily require a local presence, but selling construction machinery (Sany in Georgia), auto parts (Wanxiang in Illinois) or consumer products (Lenovo in North Carolina) requires closer proximity to consumer and partners. In addition, the “Made in the US” branding is an increasingly attractive value proposition for maintaining a competitive edge with Chinese consumers. China is home to one of the fastest growing consumer markets in the world, and foreign brands and quality control are increasingly important for China’s affluent middle class. Firms like Haier (producing high-end white goods in South Carolina) have been successful with this strategy for some time, and recent transactions (including Smithfield) illustrate that “Made by China Overseas” is an interesting value proposition for other consumer goods as well.

Outlook: The Race is On

Manufacturing has historically been an important draw for foreign firms investing in America, accounting for more than one-third of total FDI stock in the US and providing more than two million American jobs. The level of Chinese manufacturing FDI in the US is still small, however, and Chinese firms account for a tiny fraction of American manufacturing jobs. But the logic for localizing production in the world’s biggest and most advanced economy is changing dramatically as market reforms and the maturation of the Chinese economy are putting pressure on Chinese firms to re-think global value chains.

To be clear: the United States will not see a China-driven manufacturing boom. The gap between cost structures in China and America is still too dramatic for a large-scale migration of productive capacity to the US. Motorola Mobility’s recent decision to shut down its loss-making phone assembly plant in Texas ahead of the Lenovo takeover illustrates that Chinese firms are not immune against these realities. Labor-intensive light manufacturing and assembly will continue to take place in China or other places with low labor costs, high flexibility and economies of scale. It is also unlikely that Chinese companies will shake up the competitive landscape in US manufacturing in the near term, as they have thus far not demonstrated that they possess a unique and innovative manufacturing model that would give them a competitive edge in a highly regulated economy such as the US (as opposed to Japanese firms’ lean production or just-in-time models in the 1980s). 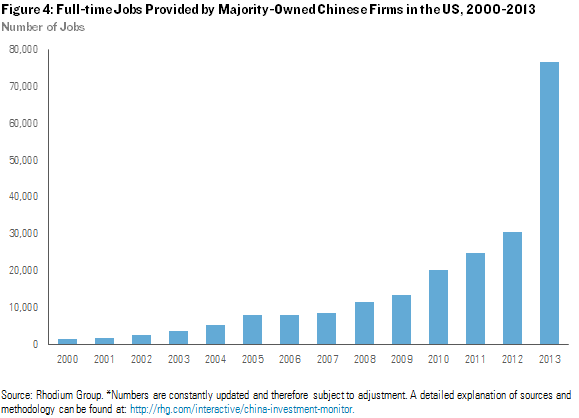 However, the combination of a changing economic structure and the liberalization of outbound investment policies has triggered a second generation of Chinese manufacturing investments in the US that go beyond just the tariff-jumping motive. Innovation-intensive sectors (such as aviation, pharmaceuticals, and electronics), high-end consumer goods (such as cars and food), and industries with politically distorted cost structures in China (such as steel and chemicals) have great potential to attract manufacturing investment from China. Identifying these industries, and understanding how to successfully compete for these investments will be the key for US states and municipalities, hoping to attract these investment dollars and the associated manufacturing jobs.