With Russian gas supplies reaching record lows, and natural gas prices reaching record highs, Europe is bracing for a very hard winter. On August 5, the European Council approved a European Commission proposal for a EU-wide gas demand reduction plan to last until March of 2023. This plan instructs Member States to develop implementation plans that minimize economic, social, and national security costs. This includes identifying which industries have the greatest ability to reduce gas consumption, and which should be protected from both voluntary and mandatory cuts. In this note, we provide an overview of the role that industry plays in Europe’s natural gas landscape and the role that gas-intensive industry plays in the European economy, and we provide recommendations for Member States to consider as they develop gas reduction prioritization plans.

Before the current crisis, the European Union (EU) consumed about 400 billion cubic meters (BCM) of natural gas each year. Of this, more than 40% was supplied by Russia (Figure 1). European gas demand is split roughly evenly across power generation, building heating, and industry. 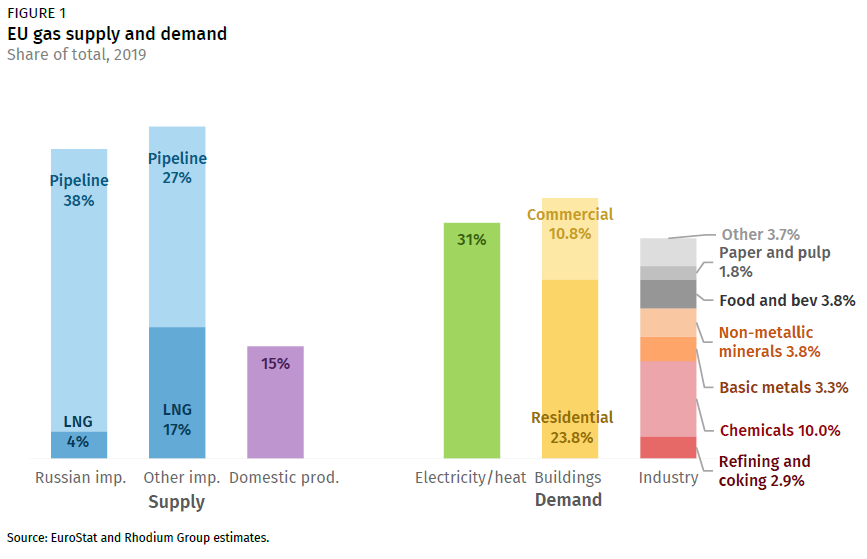 European efforts to reduce Russian gas dependence this year have focused largely on securing alternative sources of supply, and increasing non-gas forms of power generation (including accelerating renewable construction, ramping up coal generation and delaying or canceling nuclear power plant retirements). These measures are having a meaningful impact, but not enough to offset the decline in Russian gas supply. As of June, Russian exports to the EU were only 30% of 2016-2021 average levels, including a 75% reduction in flows through the Nord Stream 1 pipeline to Germany. In the months since, Nord Stream 1 supply has been completely halted. This has helped push natural gas prices in Europe to record levels (Figure 2) – surpassing 200 EUR per MWh ($60 per MMBTU) in August. 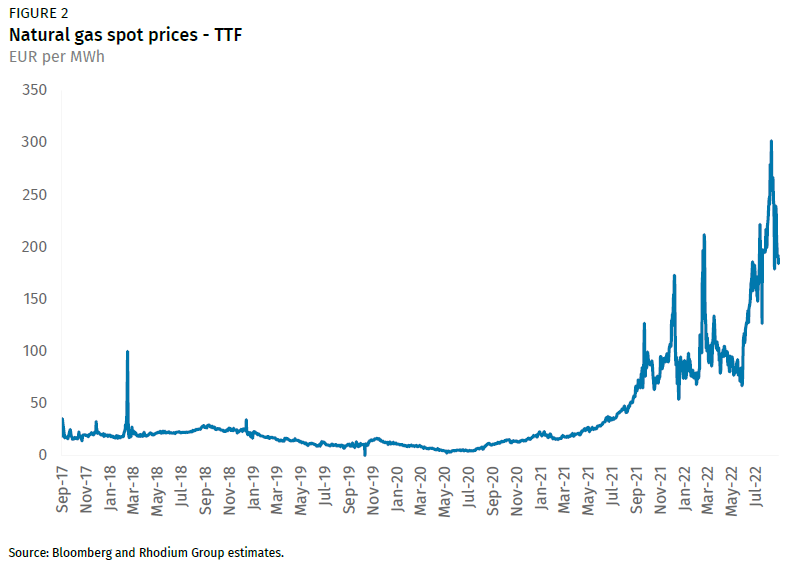 Rising natural gas prices have pushed up the cost of electricity as well. In Germany, for example, electricity prices have been trading above 400 EUR per MWh on the spot market in September, compared to a little over 100 EUR during the same period last year and less than 50 EUR during September 2020. In addition to raising costs for European households and businesses through higher-priced gas bills for heating and cooking and electric bills for cooling and lighting, the rapid growth in natural gas and electricity prices is threatening Europe’s manufacturing base. Price-driven factory closures threaten a regional economy already teetering on the edge of recession. At the same time, reductions in industrial gas demand may be less costly from a humanitarian standpoint this winter than balancing the market on the back of households, small businesses, schools and other public buildings that need gas for heating. As European policymakers prepare gas reduction plans, they are grappling with these trade-offs, and looking for where reductions in industrial gas demand would be least economically damaging.

The role of gas-intensive manufacturing in the European economy

Industrial gas consumption in Europe is concentrated in a handful of industries which, by themselves, play a relatively modest role in overall economic activity and employment in the European Union. Just six sectors account for 87% of total industrial gas consumption: refining and coking, chemicals, basic metals (iron and steel), non-metallic mineral products (cement and glass), paper and printing, and food and beverage manufacturing. Yet only 4% of total EU employment is in these industries, half of which is in food and beverage manufacturing—the most labor-intensive of the six. If you exclude food and beverage manufacturing, the remaining five account for 81% of EU industrial gas demand but only 2% of total employment. One million cubic meters of gas demand supports 10-163 jobs directly in these energy-intensive sectors (Figure 3) compared to 1,398 jobs on average for the rest of European manufacturing. Refining and coking is the most gas-intensive relative to employment, followed by chemicals, then basic metals, then non-metallic mineral products, and paper and printing. 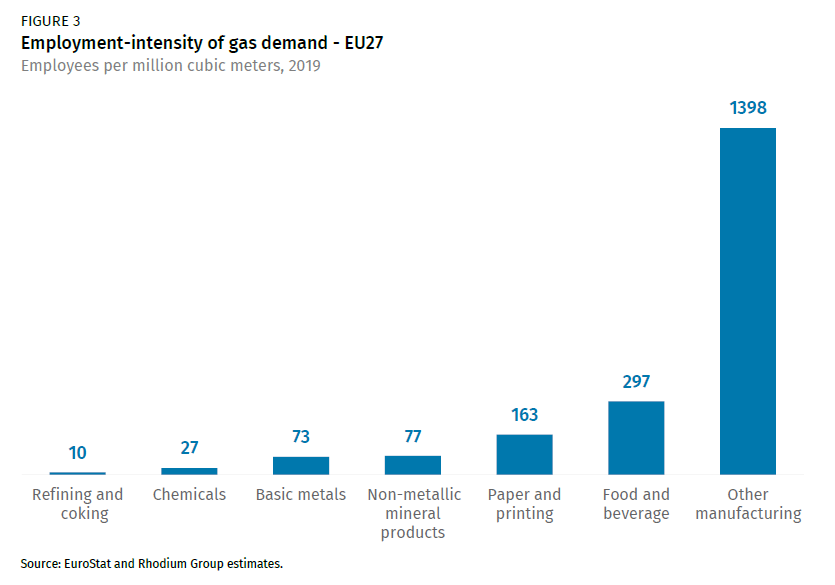 Gas-intensive manufacturing accounts for a slightly larger share of EU economic activity. The six gas-intensive industries account for 5% of total economic value-added, which drops to 3% if you exclude food and beverage manufacturing. The rank order among these for economic value-added per million cubic meters of gas consumption (Figure 4) is the same as for employment-intensity (Figure 3). Refining and coking adds the least economic value directly per million cubic meter of gas used, followed by chemicals, basic metals, non-metallic mineral products, and paper and printing. 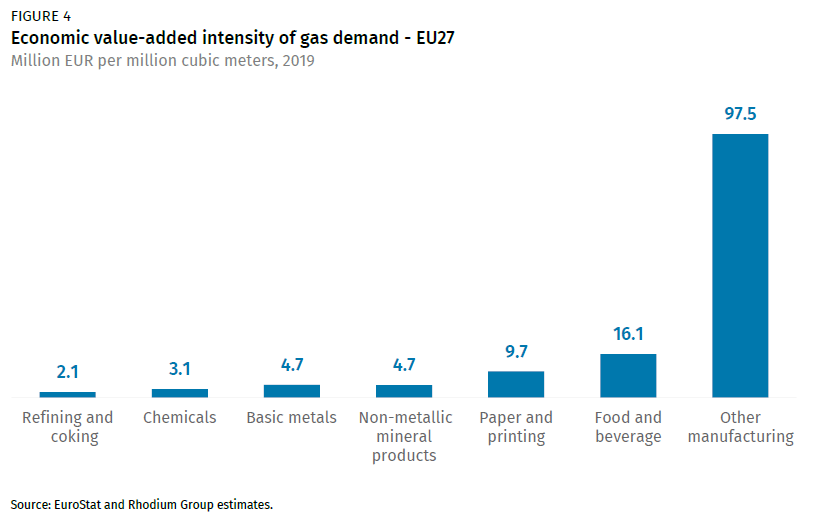 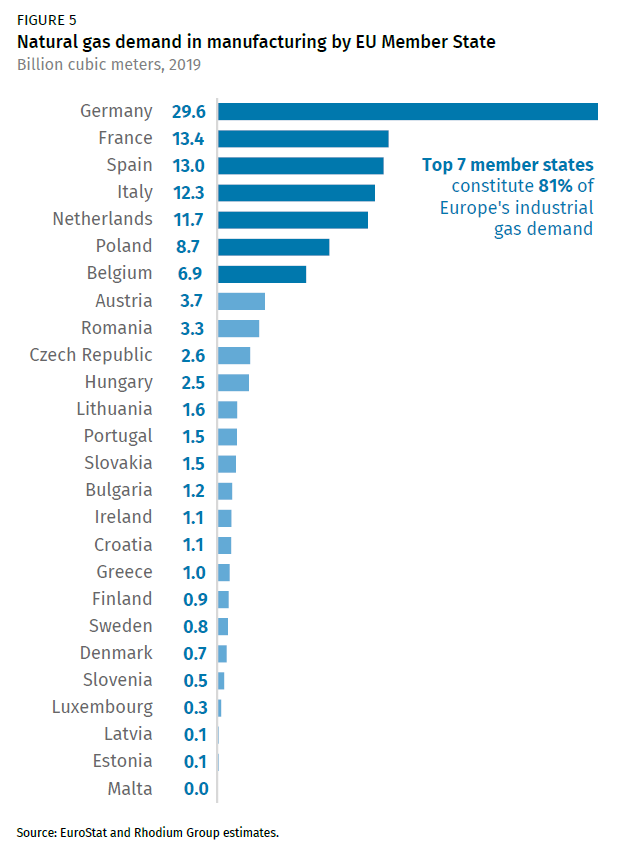 In terms of the importance of gas-intensive manufacturing to individual member-state economies (Figure 6), Romania is the most exposed, with more than 7% of total economic value-added coming from gas-intensive manufacturing (though most is from food and beverage manufacturing), and Iceland is the least exposed. In terms of individual industries, refining and coking plays the largest role in Croatia, Hungary, and Poland. Chemicals play the largest role in Belgium, Germany, Finland and the Netherlands. Basic metals play the largest role in Austria, Slovenia, Slovakia, and Bulgaria. For non-metallic mineral products, it’s Czechia, Poland, Bulgaria, Latvia, Portugal, and Slovenia. 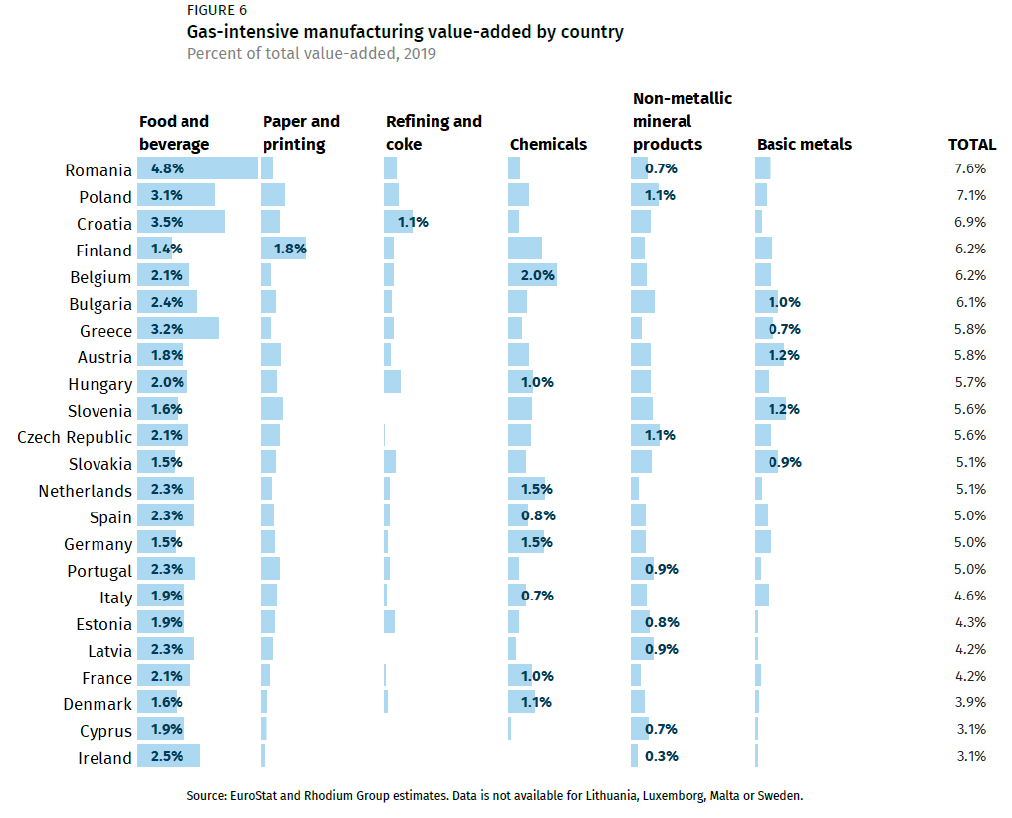 These data just cover the direct economic and employment contributions of gas-intensive manufacturing. Some of the output of these industries is used in downstream manufacturing that employs more people and contributes additional economic value added. Other output is used directly in non-manufacturing activity, like construction (in the case of basic metals and non-metalic mineral products), transportation (as in the case of refining and coking) or directly consumed by households (like food and beverage manufacturing). Thus, as EU policymakers develop industrial gas demand rationing plans, the downstream effects of gas-intensive manufacturing disruptions are some of the most important factors to consider.

Over the medium term, the most successful strategy for mitigating the impact of Russian gas supply disruptions on European industry and the European economy, while still meeting EU climate change targets, is to invest in technology that reduces the amount of gas required to produce these goods. These investments include efficiency improvements, as well as production processes that use other fuel sources. Electrification, renewable-powered hydrogen, and sustainable biomass are all potential options. For example, a recent report published by the European Climate Foundation found that by 2025,  industrial electrification and energy efficiency improvements can reduce European industrial gas demand by 10-13 billion cubic meters per year.

While it’s crucial that European policymakers and industry start making these investments as soon as possible, they will only have a modest impact in time for the coming winter. In directing Member States to develop near-term gas rationing strategies, the European Commission has suggested Member States consider the following (approved by the European Council):

(a) The impact of a disruption on supply chains that are critical for society;
(b) The possible negative impacts in other Member States, in particular on supply chains of downstream sectors that are critical for society;
(c) The potential long-lasting damage to industrial installations;
(d) The possibilities for reducing consumption and substituting products in the Union

While it’s difficult to make sweeping generalizations about the implications of supply disruptions in any individual gas-intensive manufacturing sector on these four criteria, we offer the following observations.

The Commission was right to urge Member States to consider the potential impact of shutting down a manufacturing facility on the health and longevity of the equipment. This is not a generalized issue for gas-intensive manufacturing but limited to certain equipment times and production processes. Indeed, nearly all industrial facilities need to be taken offline for maintenance from time to time. The most important factor in mitigating potential damage is ensuring that facilities have as much lead time as possible to plan for potential outages.

2. Focus on areas with spare production capacity outside the EU

Mitigating the economic and employment costs of a disruption in gas-intensive manufacturing will depend heavily on the availability of downstream industries in Europe to source substitution inputs from outside the EU. This is particularly true for chemicals and metals (Figure 7) where the majority of EU production is consumed by downstream manufacturing in the EU (for example, steel used in automobile manufacturing). European policymakers should actively engage in conversations with chemicals and metals consuming industries (as well as the construction industry, which is a large consumer of steel, cement, and glass) about potential availability of supply outside the EU and the speed at which they could switch to other providers. EU officials should then coordinate outreach by Member States to government officials in allied countries with potentially available chemicals and metal manufacturing capacity to assess the potential for increased or redirected production, and to enlist their help in addressing any potential barriers to that increase/redirection. The high cost of gas in Europe is already driving some of this substitution on purely market grounds, but policy engagement is important both for emergency planning purposes and to maximize the availability of non-EU supply in the event of a severe crisis this winter. 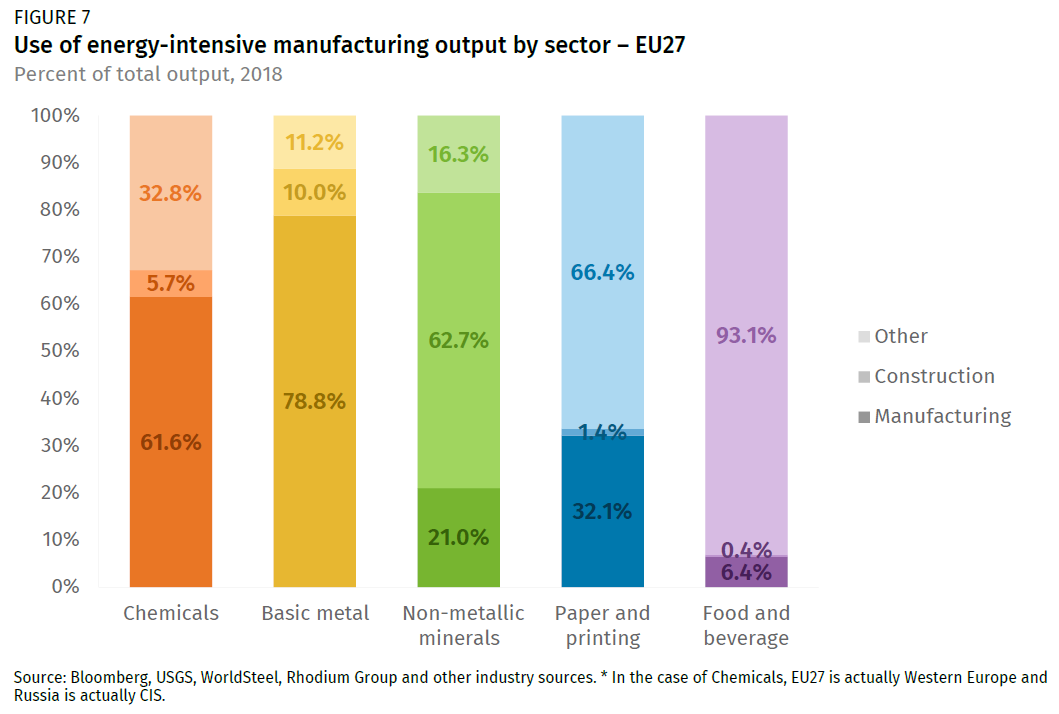 While Russia is a large producer of oil and natural gas, it’s also a large producer of many gas-intensive manufactured products. As European officials evaluate the availability of foreign gas-intensive products as inputs for downstream European industry or for direct consumption by households and businesses, it is important they don’t trade one Russia-driven supply crisis for another. Even if the non-EU supply of gas-intensive products doesn’t come from Russia directly, current or future disruptions of Russian production could limit market availability globally. For example, Russia accounts for 7% of refined petroleum products traded globally (Figure 8), and disruptions in Russian supply have contributed to the tight refined petroleum product market globally and the currently limited amount of spare capacity. As a result, any natural gas shortage-driven reductions in European refining capacity would have an even larger impact on gasoline, diesel, and jet fuel prices, both in Europe and around the world. Russia is also a reasonably large player in commodity chemicals, steel, and pulp production, less so in cement and paper. 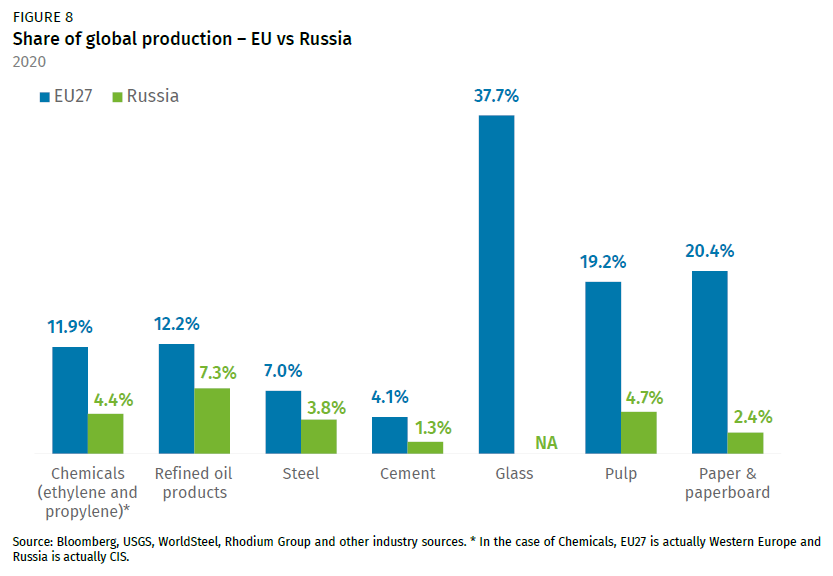 4. Beware of areas where regulatory structures will limit the speed of supply diversification

The ability to sell certain products in the European market is subject to regulatory standards that foreign producers might not be able to meet immediately, even if they have spare production capacity. This is most pronounced for food manufacturing. Quickly shifting from domestic production to imported supply of major manufactured food products at scale would be challenging, while still ensuring food security for the continent throughout winter. Regulatory standards can also slow substitution in the construction and chemicals industries.

This nonpartisan, independent research was conducted with support from the William and Flora Hewlett Foundation. The results presented in this report reflect the views of the authors and not necessarily those of supporting organization.