Nukes in the Crosshairs Revisited: The Market and Emissions Impacts of Retirements

Low natural gas prices, weak electricity demand growth and the rapid expansion of renewables have reduced power sector CO2 emissions to their lowest level in more than a quarter century. These same factors, however, are now also putting the  nation’s largest source of zero-carbon electricity, nuclear power, at risk. We examine electric power markets and CO2 emissions consequences of potential nuclear plant retirements and find that:

Nuclear under pressure: Five nuclear power plants have retired over the past five years and a number of other plants are at risk. We estimate that an additional 24 gigawatts (GW) of existing nuclear capacity nation-wide could close between now and 2030 unless additional policy action is taken, both in competitive and regulated markets.

Electricity market impact: Lost generation from recently retired nuclear power plants has been replaced primarily with fossil fuels. We expect that to be the case for future retirements as well. The exact impact depends on the fate of the Clean Power Plan (CPP) in court and the design of state implementation plans (SIPS) if the CPP is upheld. Regardless of regulatory scenario, we estimate that over 75% of the lost generation from at-risk nukes would be replaced by fossil generation, largely from natural gas combined cycle (NGCC) power plants.

Emissions consequences: Power sector CO2 emissions increase in all scenarios if at-risk nuclear power plants retire. In the best-case scenario, where the CPP is upheld and states cover both new and existing fossil sources in their implementation plans, emissions increase by 38 million tons in 2020, declining to 6 million tons in 2030, relative to a scenario where at-risk nukes remain online. If states only cover existing sources in their implementation plans, however, nuclear retirements could erode 34% of the emissions reduction benefit of the CPP. If the CPP is struck down in the courts, nuclear retirements could double the pace of power sector emissions growth between now and 2030.

This year, power sector CO2 emissions are at their lowest level since 1988. Weak power demand growth has limited the need for new generation and cheap natural gas and rapid growth in renewable energy have reduced coal’s market share (Figure 1). In competitive markets, these trends have reduced wholesale power prices, curbing output from existing coal-fired power plants and putting new coal-fired power plants out of the money. But low wholesale prices are now also threatening the commercial viability of many nuclear power plants as well.

Last Monday the Fort Calhoun Nuclear Generating Station closed, the fifth nuclear plant to retire within as many years. Retrospective analysis from the Energy Information Administration (EIA) shows the lost zero-carbon generation from the last four retirements has been replaced primarily with coal and natural gas. This suggests that current wholesale price dynamics could begin to undercut recent emission reduction gains. Recognizing this risk, some states have begun looking at local strategies for ensuring the climate benefit of existing nuclear plants is somehow reflected in the market, like the recently adopted ZEC program in New York. 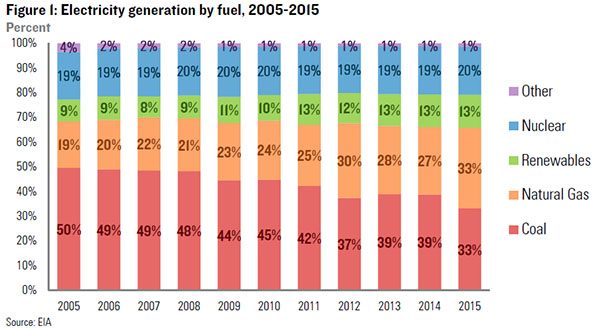 Nation-wide we estimate that roughly one-half of the nation’s nuclear plants located in competitive markets are at risk of early retirement. The economics of nuclear plants in regulated regions are also being drawn into question as well. In total, we estimate an additional 24 GW of nuclear generating capacity could close across the country between now and 2030 unless additional policy steps are taken (Figure 2). 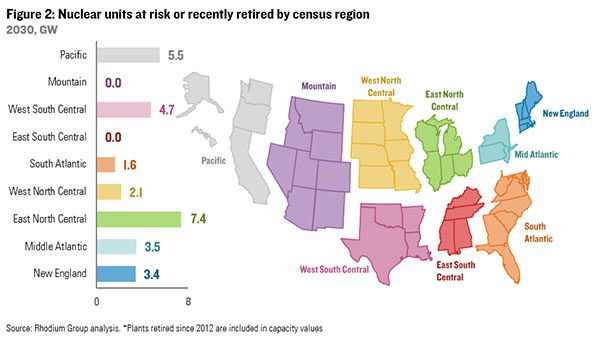 The electricity market and emissions implications if these at-risk plants retire will be shaped in large part by what happens to the Clean Power Plan (CPP), which is currently stayed by the Supreme Court. We modeled three potential regulatory scenarios using RHG-NEMS, a version of the EIA’s National Energy Modeling System maintained by RHG. We started by assessing the impact in a scenario where the CPP is upheld in the courts and State Implementation Plans (SIPS) cover both new and existing fossil fuel generation. We then assessed the impact if the CPP is upheld but SIPS cover existing fossil generation only (which they are allowed to do under the rule).[1] Finally we modeled the impact of at-risk nuke retirements if the CPP is struck down by the courts.

Across all three scenarios, the lost generation from retired nuclear plants is replaced primarily with fossil generation – though the extent and nature varies depending on what happens to the CPP.  If the CPP is upheld and states choose to cover both new and existing sources, nuclear retirements are mainly replaced by natural gas once SIPS take effect in 2022 (Figure 3).  Renewables make up the difference, and there is a modest decline in coal generation relative to a scenario where at-risk nukes remain online – with total power sector emissions capped by the CPP, the growth in natural gas generation needs to be offset by a decline in coal. 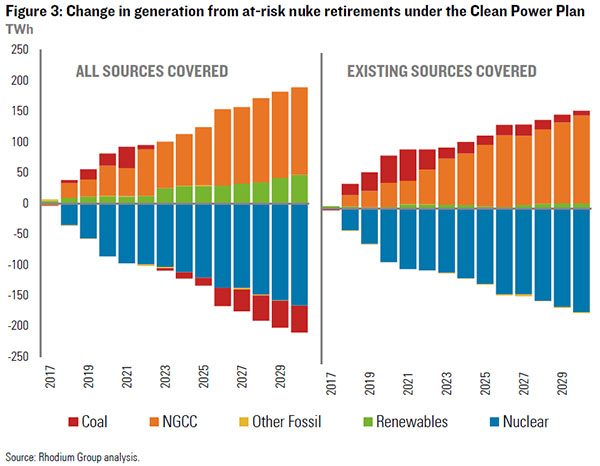 Likewise, without the CPP lost nuclear generation is mostly replaced by fossil power with only a small increase in renewable generation.

If the CPP is struck down in the courts but at-risk nukes remain online, we expect power sector emissions to decline by 38 million tons relative to 2015 levels by 2020 but then start to rise. If at-risk nukes retire, power sector emissions remain at 2015 levels in 2020 and grow more than twice as fast between 2020 and 2030 than they would otherwise. 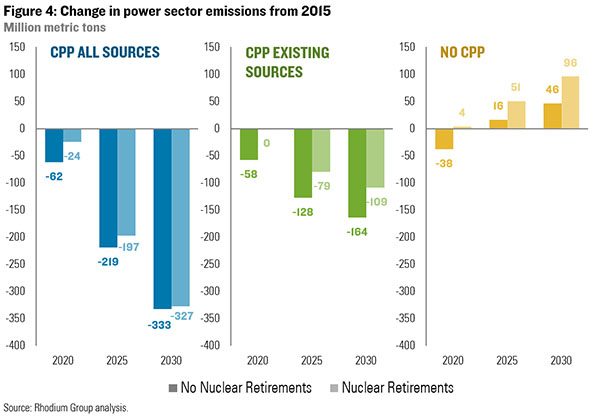 [1] In both scenarios, we assume states use a mass-based standard where emissions credits can be traded intra-regionally and allowances are recycled to ratepayers.