Renewable Tax Extenders: The Bridge to the Clean Power Plan

At the end of 2015, Congress passed a budget deal that included a surprise multi-year extension and phase-down of two key federal tax incentives for renewable energy – the Production Tax Credit (PTC) and Investment Tax Credit (ITC). In this note we provide the first long-term outlook for utility scale wind and solar with the tax extenders in place and discuss the implications for compliance with the Environmental Protection Agency’s (EPA’s) power sector CO2 regulations, also known as the Clean Power Plan (CPP). We find that:

The renewables industry now has a bridge to the CPP: Before the tax extenders utility-scale wind and solar faced a bleak future with combined capacity additions dropping below 5 gigawatts (GW) per year until the CPP kicks into gear in 2022. The combination of the extenders and the CPP now has the industry positioned for growth well into the next decade with annual capacity additions topping out at an unprecedented 30 GWs in 2021.

A Christmas present for renewables

Just in time to make it home for the holidays, Congress passed an omnibus spending bill that keeps the government open for another year and included a number of policy priorities for both parties. One of the biggest surprises in the bill was a multi-year extension and phase-down of the renewable Production and Investment Tax Credits (PTC and ITC). These are the flagship federal deployment incentives for wind and solar, respectively. Before Congress extended these programs, the PTC had expired at the end of 2014 and the ITC was set to drop to10% of project costs at the end of 2016. Now the PTC will ultimately get phased out by 2020 while the ITC will decline from 30% to 10% in 2021. After years of inconsistent and retroactive policy support from Congress, the wind and solar industries can operate with a level of policy certainty last seen in the 1990s.

Analysis of the impacts of the tax extenders to date has focused on the short-term market implications. While useful, a short-term focus misses the important influence of EPA’s CPP, the first ever CO2 regulations on existing fossil fuel–fired power plants. Under the CPP states must put in place regulations to meet strict CO2 reduction goals starting in 2022. In principle this should provide substantial support for renewables, but design decisions yet to be made by states will ultimately determine true magnitude of the boost.

To assess the long-term outlook for utility scale wind and solar that considers both the tax extenders and the CPP, we use RHG-NEMS, a modified version of the National Energy Modeling System used by the US Energy Information Administration (EIA) to produce their Annual Energy Outlook (AEO). The reference case for our analysis is keyed to EIA’s AEO2015, and includes all major energy and environmental policies except for the CPP and tax extenders. We characterize the CPP as a single, national mass-based emissions standard setting a cap on CO2 from existing and new fossil steam and NGCC generators. The limit follows the glide path for emission reductions set by EPA, and we assume allowances are auctioned and freely traded across the country to facilitate efficient and least-cost compliance. This approach captures the most gradual, economically efficient, and easily approvable CPP implementation pathway. We then explore the implications for utility scale wind and solar under the CPP, with and without the tax extenders.

We expect that a surge of generation from NGCCs and a decline in coal generation would be the likely least-cost CPP compliance pathway if the PTC and ITC weren’t extended (left hand side of Figure 1). A CPP driven price on carbon isn’t enough on its own to tip the scale towards wind and solar thanks to persistently low natural gas prices. Instead, NGCCs easily ramp-up generation by over 200 terawatt-hours (TWHs) above EIA’s AEO2015 reference case at the start of the CPP compliance period. At the same time, coal generation starts a steady decline at the CPP emissions limit gets tighter out to 2030. Wind and solar play a role in compliance, but not until later in the forecast.

The tax extenders fundamentally change the compliance game by shifting the economics in renewables’ favor nearly a decade earlier than they would under the CPP alone. Wind and solar generation ramps-up during the extension period through 2021, adding almost 300 TWHs of generation above reference from 2022 onward (right hand side of Figure 1). This renewables surge pushes NGCCs out of the compliance picture and drives down coal generation. The tax extenders allow states to meet pending CO2 regulations almost exclusively with zero-emitting renewables, leaving the country well positioned for deeper cuts down the road rather than a greater reliance on fossil fuel–fired power. While the design of actual state CPP implementation plans could lead to different outcomes, the economics are dramatically changed with the tax extenders in place. 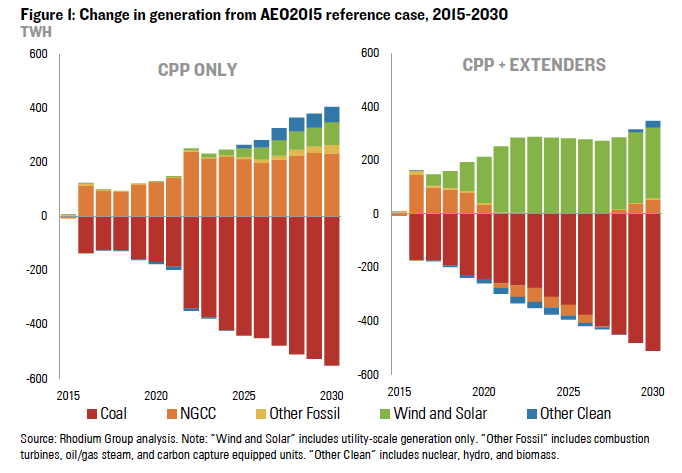 The renewables industry now has a bridge to the CPP

Though wind and solar could see some upside under the CPP without tax extenders, it wouldn’t materialize for a decade. In the meantime, wind and solar would face a cliff that could inflict permanent damage to the industry’s manufacturing and installation base. When just considering the impact of the CPP, combined wind and solar annual capacity additions drop by a factor of 4 from 2015 levels bottoming out at 4 GWs and don’t begin to recover until 2022. The tax extenders pull renewable capacity builds forward, allowing the industry to not just maintain, but expand capacity additions to unprecedented levels in the years ahead (Figure 2). The CPP amplifies the value of Congress’ holiday gift to the renewables industry with combined capacity additions topping out at 30 GWs per year in 2021. 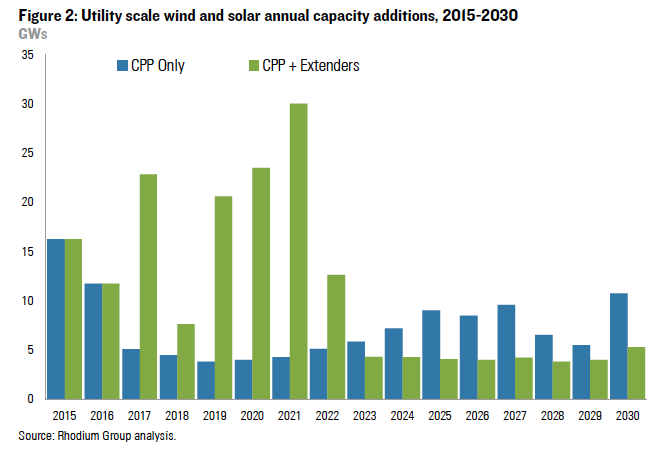