A familiar pattern has emerged: Chinese authorities do something, skeptics immediately cite the move as evidence that reform is off the table, while others see evidence of structural adjustment in a reform direction.  So it is with today’s intervention in the RMB market by the People’s Bank of China. In this note we address three questions: is the move part of ongoing reforms or an export-push; does it presage capital flight and constant intervention to come; and what are the implications for US-China relations and the Xi visit?

On August 11, the People’s Bank of China (PBoC) intervened in the foreign exchange market to set the midpoint for RMB/USD trading down by 1.9% versus the previous day’s parity. Henceforth the opening rate will be determined by the previous day’s closing rate, as well as supply and demand conditions and major movements in other currencies, leaving the Bank room to move the market by encouraging (or directly) buying and selling but no longer by sheer fiat that ignores market signals. This reset of the opening rate – the value around which the market is now permitted to fluctuate up to 2% daily – led to the most significant one-day adjustment since the hard peg to the US dollar was abandoned in July 2005, moving the rate against the USD out of the stable range it had been held at since April 2013 (Figure 1). In subsequent days the downward trend repeated, although Beijing’s discretion to continue intervening through transactions appears to have stabilized expectations as the first week of the new era progressed. 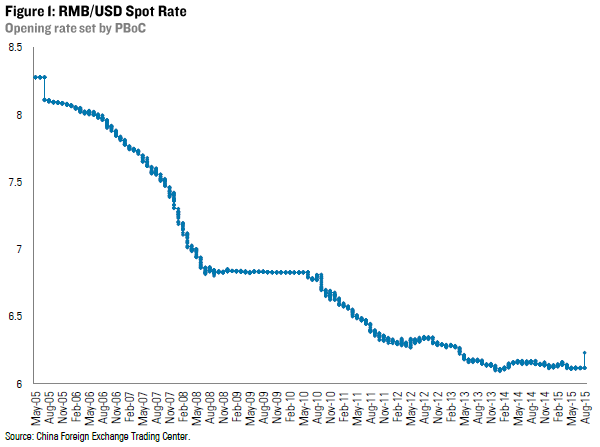 First, is the PBoC’s argument that this is a reformist move credible? Yes it is: letting markets guide the opening rate is a step towards the exchange rate liberalization commitment China pledged to accomplish this year. Unfortunately for a Beijing that likes harmony, stability is not a normal attribute of currency markets during times of volatility in economic fundamentals. The RMB/USD rate has been stable throughout 2015, while the RMB’s real effective rate has appreciated considerably and cross-rates with other major currencies have fluctuated significantly. One of the IMF’s requirements of China if it wants to be in the Special Drawing Rights (SDR) currency basket – a high-priority Chinese goal for this year – is that RMB exchange rates must be more market-oriented. As the Fund said in a detailed report on China and the SDR published last week:

A market-based “representative” RMB rate in terms of the U.S. dollar would be needed to value the RMB against the SDR. The representative rate is currently the onshore fixing rate, i.e., central parity rate, announced daily by the CFETS at 9:15 a.m. However, this rate is not based on actual market trades, and can deviate by up to 2 percent from the onshore market exchange rate. In the event of SDR inclusion, the Fund, in consultation with the Chinese authorities, would need to identify a market-based exchange rate that could be used as a representative rate for the RMB. Based on staff’s preliminary assessment, it appears that one of the benchmark exchange rates already calculated daily by the China Foreign Exchange Trading System (CFETS) would be suitable for this purpose.

The half-way house RMB regime – with the PBoC perpetually resetting the starting point against which a daily 2% movement is permitted to the same value regardless of market signals – was increasingly divergent from reality. Looming lower interest rates in China due to faltering growth and higher rates in the US as the Fed prepares to hike were going to amplify that disconnect, making it even harder to sustain a RMB value just keyed to nominal rate stability. Speculators were lining up in anticipation of the breakpoint. The case for changing the level and the mechanism for setting the RMB managed float was solid. The PBoC moved to act, as encouraged by the IMF, with decisiveness rather than invite month after month of one-way betting about its direction if it had tried to dribble this move out with a slow and ambiguous crawl. There is never a good time to do these things, but now is better than later. China’s equities market crumbled this summer because its regulators were incapable of acting in the face of a bubble; the PBoC was determined not to repeat that mistake with the currency. Many commentators blasted Beijing for its RMB move: but can you even imagine how caustic they would have been if Beijing had not acted, letting the fundamentals continue to diverge from market signals and a month from now – right on the eve of President Xi’s visit to the United States – rate hikes in the US forced a more disorderly correction in China’s exchange rates?

The second question is implications of this move for capital flows and market expectations going forward. If our answer to the question above is correct, and in the period to come the PBoC demonstrates that this is a structural move consistent with IMF advice, then markets will need to figure in “normal” exchange rate volatility going forward for China, just as they do for other currencies.  That would be a good thing, although frightening given how accustomed to policy fixing observers and participants have become. Fear is good: lack of fear that government will permit speculation to be punished is bad.  This implies Beijing’s acceptance that it must arrest undesirable depreciation trends by addressing underlying confidence in growth rather than by toying with exchange rates daily.  Beijing cares more about avoiding capital flight driven by depreciation concerns than it does about boosting exports with a cheaper currency: the State is a net importer; the private sector is the net exporter in China. Exports did not drive this move. Depreciation make domestic credit conditions even more stressful, and raises the burden on legions of firms with offshore debt payments to make. The PBoC is aware of this and has no intention of creating a weak RMB era marked by capital outflows that make the equity market crisis look easy to manage by comparison.

Third and finally, does this impact US-China relations and President Xi’s visit next month? As suggested above Beijing’s move is aligned with current IMF guidance, which the US government has a say in crafting. There is certainly discord on this topic in Washington. Some continue to repeat outdated views about RMB exchange rates, while those closer to policymaking understand the necessity of RMB regime adjustment. They are hoping that the short term bluster over Beijing’s motives burns off in a few weeks, and enough faith in China’s prospects is restored in the month to come to stability exchange rates and boost global sentiment. Instead of mounting tension over Beijing’s intentions in the weeks leading up to the Xi visit (about five weeks out), responsibility for any RMB downward drift  against the dollar must now be attributed to market signals to a greater extent.

On net, a weaker RMB against the dollar will be at least mildly negative for the US-China mood unless it is followed by significant policy reform action in related areas. The optimistic case is that Beijing has intentionally forced itself to come forward with attention grabbing reform steps in the very near term, justified by the urgency of balancing the depreciation thesis, and that this will have a salutary effect on US-China relations.   First order reform steps are the only sustainable means of forestalling deepening expectations of a RMB weakening trend. This exchange rate move is one of five capital account reform steps China, the IMF and United States have been contemplating since the spring.  If the sequence of anticipated results comes to pass, the US-China relations mood will likely return to neutral – not the best time in our bilateral economic history, but not a new era of currency wars either.