The Hidden Cause of America’s Coal Collapse

The US coal mining sector is in free-fall.  The market value of US coal companies today is a fraction of what it was just a few years ago. Dozens have gone bankrupt. The public debate regarding the cause of US coal’s decline has focused largely on domestic factors. Some see low-cost natural gas as the primary culprit. Others blame environmental regulations. But the leading cause of the decline in US coal production revenue is the one most overlooked – a slow-down in Chinese demand.

A sector in decline

The American coal industry is hurting. The four largest US miners by output, Peabody Energy, Arch Coal, Cloud Peak Energy and Alpha Natural Resources, which account for nearly half of US production were worth a combined $34 billion at their peak in 2011. Today they are worth $150 million. Arch and Alpha filed for chapter 11 bankruptcy protection last year, joining a number of other smaller miners including Patriot Coal and Walter Energy.

In debating the root cause of American coal companies’ current ills, observers generally point to recent changes in the US electric power sector.  Coal’s share of US power generation has declined from an average of 53% between 1980 and 2005 to 34% in 2015 (Figure 1). As a result, domestic coal consumption has declined by 32% over the past ten years. While this has certainly hit the industry hard, the more important source of coal industry distress has nothing to do with the US power sector. Indeed it has very little to do with the US. 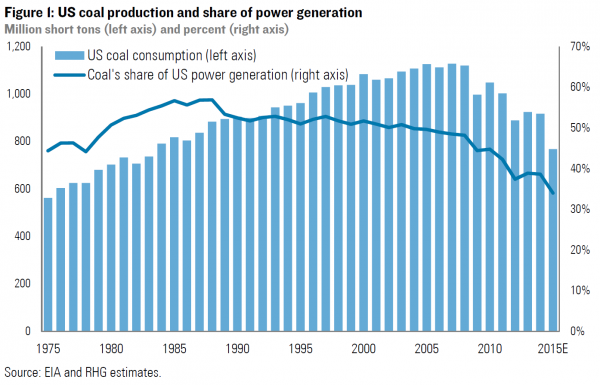 It’s certainly true that the majority of the American coal production is used for power generation within the US. Of the billion tons of coal mined in 2014, 90% was steam coal used to generate electricity (or heat in industrial boilers) at facilities located in the US. A much smaller share, 3%, was exported for use in power plants elsewhere in the world. The remainder (7%) was metallurgical coal (or “met” coal) used to make steel. While a relatively small share production in tonnage terms, met coal has traditionally fetched a much higher price than steam coal both in the US and around the world. Met prices surpassed $200 a ton in 2011, 250% more than relatively expensive Central Appalachian steam coal sold for during that same period of time (Figure 2). 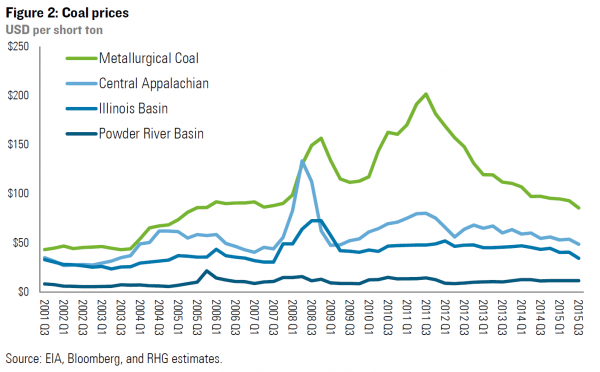 Since 2011, however, met prices have collapsed, down to $85 a ton at the end of last year. Steam coal prices have softened as well, but not nearly as much as met. If you combine these changes in price, with the changes in production quantities over the past four years, met’s role in the US coal sector’s collapse becomes pretty clear.  Between 2011 and 2014, 93% of the decline in US coal producer revenue was due to a drop in met quantities and prices. A sharp drop in US coal-fired power generation– and resulting drop in steam coal production – played a more significant role in 2015, but met still accounted for 57% of the revenue decline relative to 2011. Another 6% was due to a decline US steam coal exports. That leaves only 38% of the decline in US coal producer revenue attributable to weak domestic steam coal demand (Figure 3). 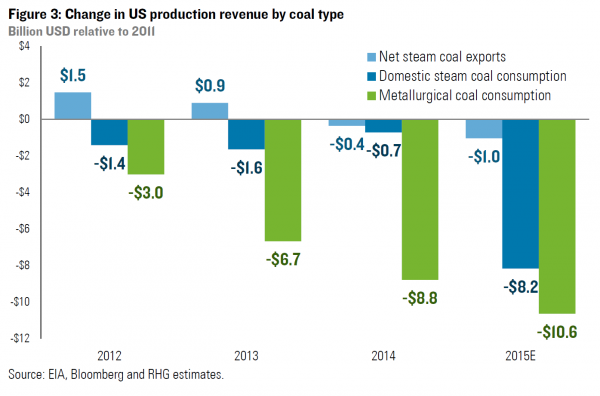 What caused the drop in met coal prices that tanked the US coal industry? One word… China. China accounts for roughly half of global steel consumption due to rapid urbanization and an investment and infrastructure-intensive form of economic growth. Chinese steel demand has been the driving force behind the met coal market for more than a decade, and that market is global, determining the prices paid for met coal mined in the US even if it’s shipped somewhere else.

Chinese economic growth has been slowing, from more than 10% each year on average between 2002 and 2012, to 6.9% in 2015. More importantly, the structure of the Chinese economy is changing – moving away from the investment and heavy industrial production that defined the past decade to the service sector activity and private consumption that will be the main engines of growth going forward.  The impact of this transition on the global coal market has been profound. Chinese steel demand, which grew at 16% a year on average between 2002 and 2012, fell by 2% last year (Figure 4). China’s economic transition coupled with stronger pollution controls and growth in renewable and nuclear power is impacting global steam coal demand as well. Chinese coal-fired power generation grew 11% each year on average between 2002 and 2012 but fell by 0.6% in 2015. Total Chinese coal consumption (including met and steam) declined by 4.6% last year. 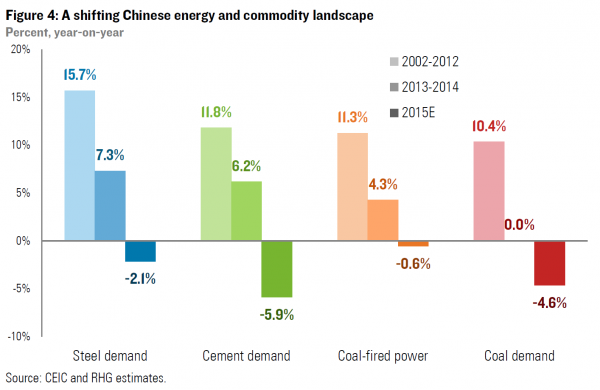 Betting on a future that never arrived

It’s not just the direct impact of the current Chinese coal consumption slowdown on US coal production revenue that has American miners on the ropes. It’s the change in outlook for Chinese coal consumption going forward. Most of the US majors bet big on future Chinese coal demand growth at the top of the cycle in 2011. Arch Coal bought met producer International Coal Group for $3.4 billion that year. Alpha Natural Resources bought Massey for $7.1 billion in 2011 citing “a big opportunity to advance Alpha’s position as a premier supplier of metallurgical coal”.  Walter Energy, which is an almost pure-play met company, doubled down on that strategy by purchasing Western Coal in Canada for $3.3 billion in 2010. CEO Joe Leonard described the deal as “a transformative transaction at a time when global demand for metallurgical coal is surging.” He continued, “our combined production capacity and geographic footprint leaves us extremely well positioned to benefit from favorable sector dynamics driven by increased steel production in markets such as China, India and Brazil.” All three companies filed for bankruptcy protection last year.

None of this is to downplay a decline in US steam coal consumption will have on American coal companies in the years ahead. As we have noted in the past, a combination of low-cost natural gas an increasingly competitive renewables will continue to eat away at coal’s domestic market share, helped along by the recently-extended Investment Tax Credit and Production Tax Credit and the EPA’s Clean Power Plan. But their current distress has far less to do with what’s happening in the US, and much more to do with a bad bet on the future of Chinese coal demand.