What Happens to Renewable Energy Without the Clean Power Plan?

A little over a week ago, the Supreme Court of the United States (SCOTUS) handed down an order to stay enforcement of the Clean Power Plan (CPP) until the legality of the Environmental Protection Agency’s (EPA’s) landmark CO2 regulation is settled. In this note we expand our previous analysis of the power market impacts of the recently extended Investment Tax Credit (ITC) for solar and Production Tax Credit (PTC) for wind on the US electric power sector to assess the impact under a range of renewable and natural gas cost projections.

The past couple months have had some ups and downs for the renewables industry. Just before Christmas, Congress extended the Production and Investment Tax Credits for renewable energy. After years of inconsistent one-year extensions, the multi-year packages (phasing out the PTC by 2020 and phasing down the ITC through 2021) finally provided some predictability to renewable energy companies and investors. It also seemed to cement a bridge for renewables to ensure their role in the early years of CPP compliance. The renewables industry did not have long to celebrate, however, as a surprise SCOTUS decision last week threw even greater uncertainty into the mix.

On February 9, the Supreme Court overturned a lower court ruling and ordered a stay on EPA enforcement of the CPP until the legal challenges to the rule work their way through the courts. Although it was always likely that the CPP would end up before the Supreme Court, the decision to stay enforcement until that time creates additional uncertainty about the timing of implementation—if it is ultimately upheld. As we highlighted in a joint commentary with the Center for Strategic and International Studies (CSIS) on the implications of the Supreme Court decision, a final SCOTUS decision is not likely until the middle of 2018, coming close to the final deadline for the submission of State Implementation Plans (SIPs). If the rule is upheld, the deadline will probably be pushed back to give states extra time to submit their plans. If the rule is struck down in whole or in part, EPA will have to go back to the drawing board.

Just How Important is the CPP in Driving Renewables Growth?

Last month we showed that the ITC and PTC extension give renewables a big boost under the CPP. Without the tax extenders the least-cost CPP compliance pathway is a shift in power generation from coal to natural gas combined cycle (NGCC). The tax extenders change this story dramatically: wind and solar generation become the least-cost compliance option, with an annual increase of about 300 TWh of renewable generation above the Energy Information Administration’s (EIA’s) most recent Annual Energy Outlook (AEO) reference case starting in 2022 (see Figure 1). 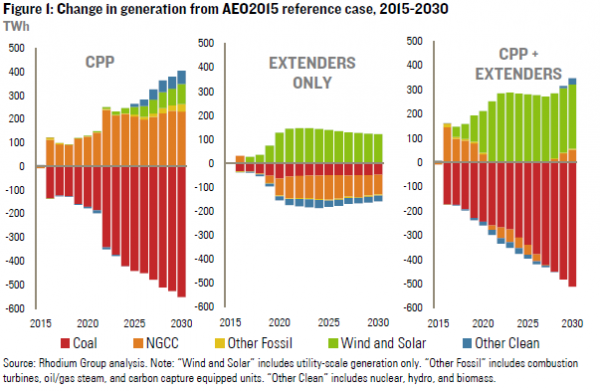 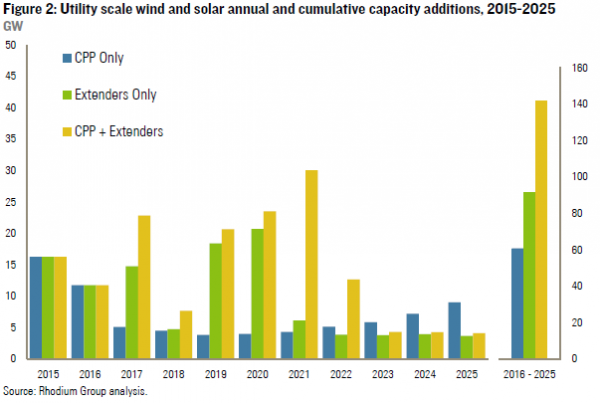 The Importance of Renewable Energy and Natural Gas Costs

The projections above for renewable energy growth in the US if the CPP gets struck down use energy cost assumptions from EIA’s 2015 AEO. If wind and solar costs fall faster than expected, or natural gas prices come in lower than expected, the outcome could be considerably different.

The renewable technology costs in AEO2015 are higher than a number of recent industry and national lab estimates. We analyzed the impact of the tax extenders on US utility scale wind and solar deployment using capital cost and performance assumptions from the National Renewable Energy Laboratory’s (NREL’s) Annual Technology Baseline (ATB). These assumptions result in a 43% decrease in solar photovoltaic (PV) capital costs and a 24% decrease in onshore wind capital costs by 2020 compared to AEO2015. All else equal, these lower renewables costs increase the impact of the tax extenders on renewable energy generation in 2022 by 250%, or a nearly 800 TWh increase in renewable generation relative to 2015 levels (Figure 3). Cumulative renewable capacity additions between 2016 and 2025 are nearly three times higher than with AEO2015 technology cost assumptions (Figure 4).

The natural gas price assumptions in AEO2015 are also higher than what we are currently seeing in the market. Henry Hub gas prices in 2015 were 30% lower than EIA projected at the start of the year and a similar differential is expected for at least the next two years. When we include lower natural gas prices¹ in our tax extenders scenario, gas gives renewable power a run for its money—resulting in an increase in wind and solar generation of only 50 TWh above current levels by 2022. Cumulative capacity additions are half what’s projected using AEO2015 gas price assumptions.

When cheaper natural gas and cheaper renewables are considered together with the tax extenders, both NGCCs and wind and solar generation get a boost, though somewhat less than when considered in isolation. New generation from wind and solar is 2.5 times higher by 2022 than under reference AEO2015 assumptions. At 163 GW, cumulative capacity additions are still almost double what occurs in our reference case and comparable to our original CPP plus tax extenders scenario. The biggest loser in this low gas and renewable price environment is coal, with generation nearly 400 TWh below current levels by 2022, even without the influence of the CPP. 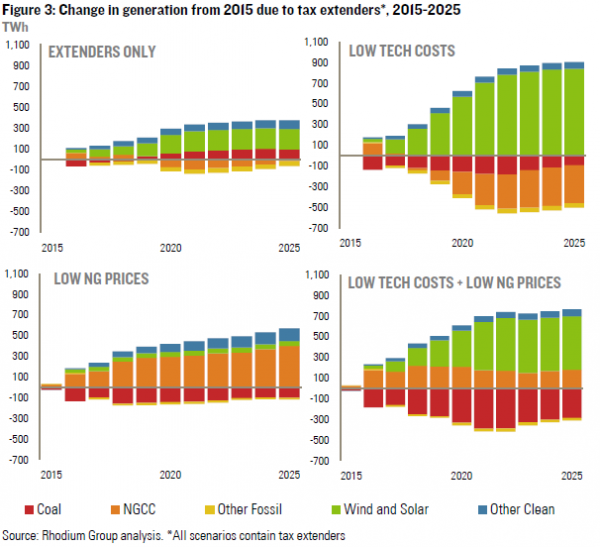 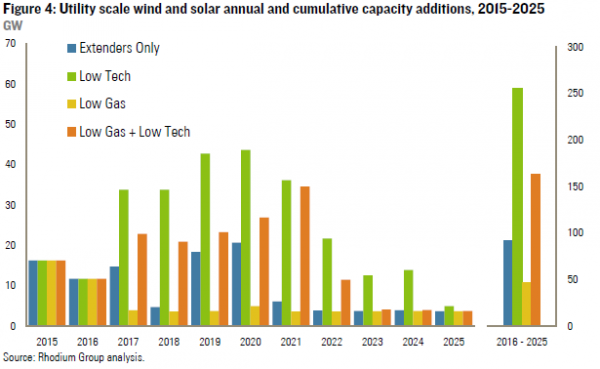 Despite the Stay, Some States are Proceeding

While SCOTUS has put enforcement of the CPP on hold, at least 15 states are proceeding with SIP development anyway. The policies these states ultimately put in place will influence renewables deployment and could amplify the impact of the tax extenders beyond what we show in this note. With this in mind, our scenarios bookend the possible range of impacts that could be expected and show that, in all but the low gas price case, the future is bright for wind and solar.