The COVID-19 pandemic and recession have been particularly devastating for Black, Latino and Indigenous communities in the US. They have experienced COVID-19 hospitalization rates four to six times higher than white Americans, and current unemployment rates are significantly higher as well. Many of these same communities are disproportionately impacted by pollution, with significant public health and economic consequences. As Congress turns its attention towards legislation to stimulate a robust economic recovery, there is an opportunity to do so in a way that both creates jobs and addresses longstanding environmental injustices. In March, Congressmen Raúl Grijalva (D-AZ) and Donald McEachin (D-VA) released a letter outlining key programs and funding aimed at achieving this objective. Since then, many of the programs in the letter have been included in HR 2 (the Moving Forward Act), the House of Representatives’ recovery legislation. In this note, we assess the employment impacts of the Grijalva and McEachin letter and find that the $107 billion-plus in spending to address clean air, clean water, toxic waste clean up, affordable housing and energy assistance could support nearly 300,000 jobs each year over the next five years.

The intersection of COVID-19 and environmental justice

The COVID-19 pandemic, combined with longstanding systemic racial inequities in the economy and public health systems, has disproportionately impacted communities of color in general, and Black, Latino, and Indigenous communities in particular.[1] Between February and May, the number of Black and Latino people employed in the US fell by 16% and 18%, respectively, compared to 11% for white people (Figure 1). 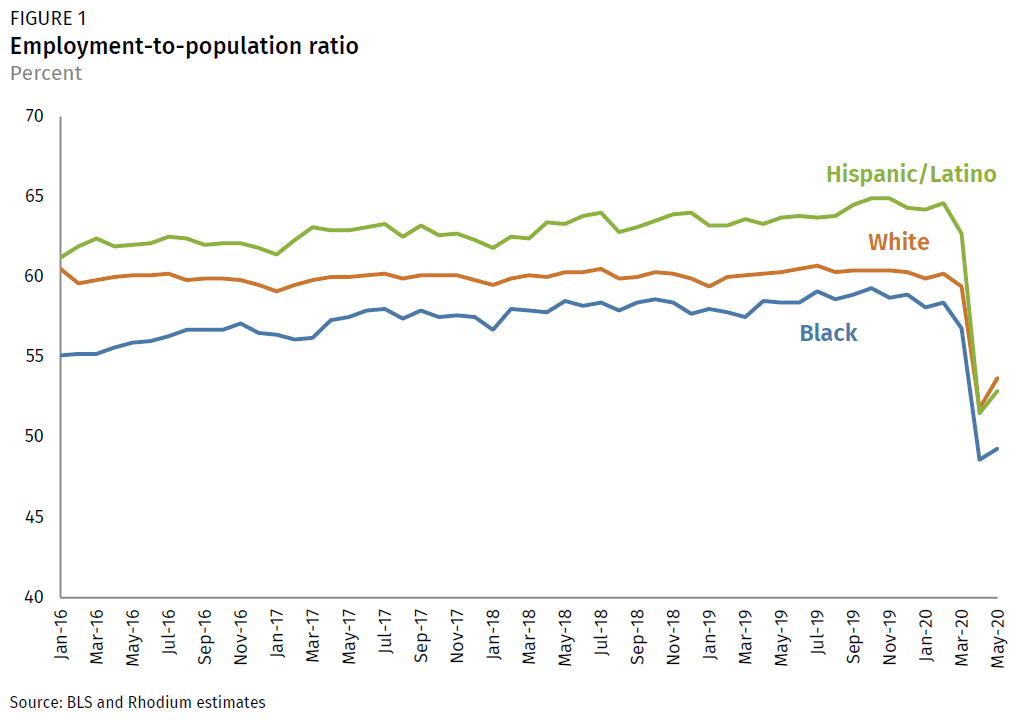 Racial disparities are even starker when it comes to the direct public health impact of the pandemic. The CDC estimates that between March and June 13, COVID-19-related hospital admission rates were 4 times higher for Latinos than white people, 4.4 times higher for Black people, and 5.5 times higher for American Indians/Alaska Natives (Figure 2). Through June 24, 2020, the CDC estimates the COVID-19 death rate for Black Americans was twice as high as for white Americans adjusted for age. While the CDC doesn’t report COVID death rates for American Indians/Alaska Natives independently, state data suggests they are considerably higher than the US average, particularly in the Southwest. 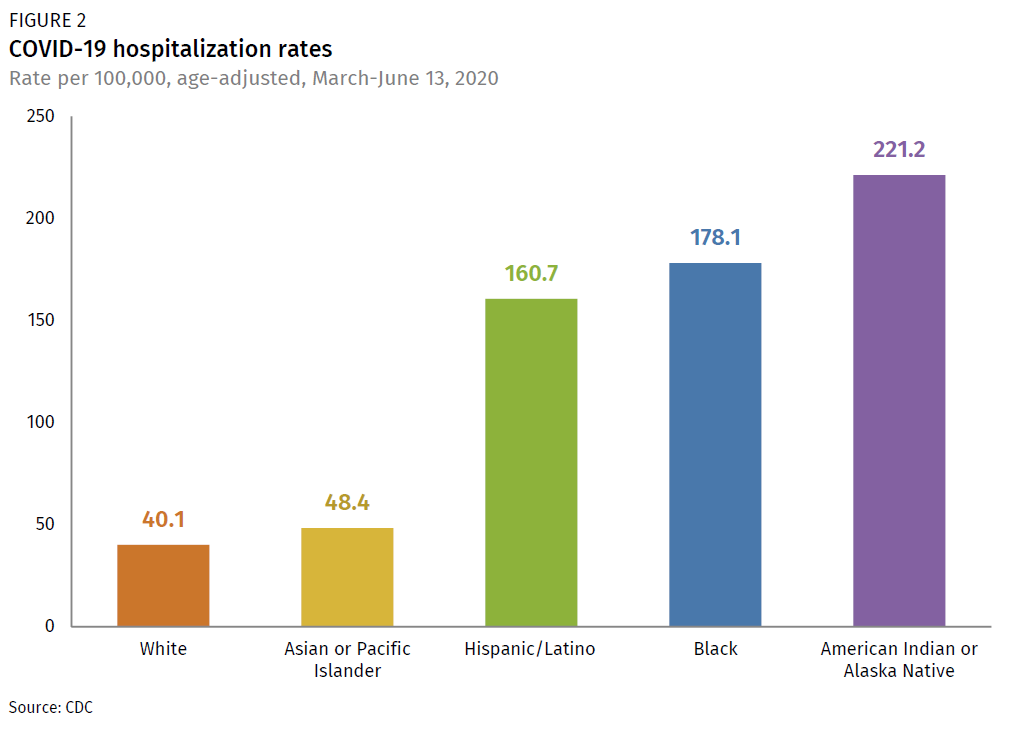 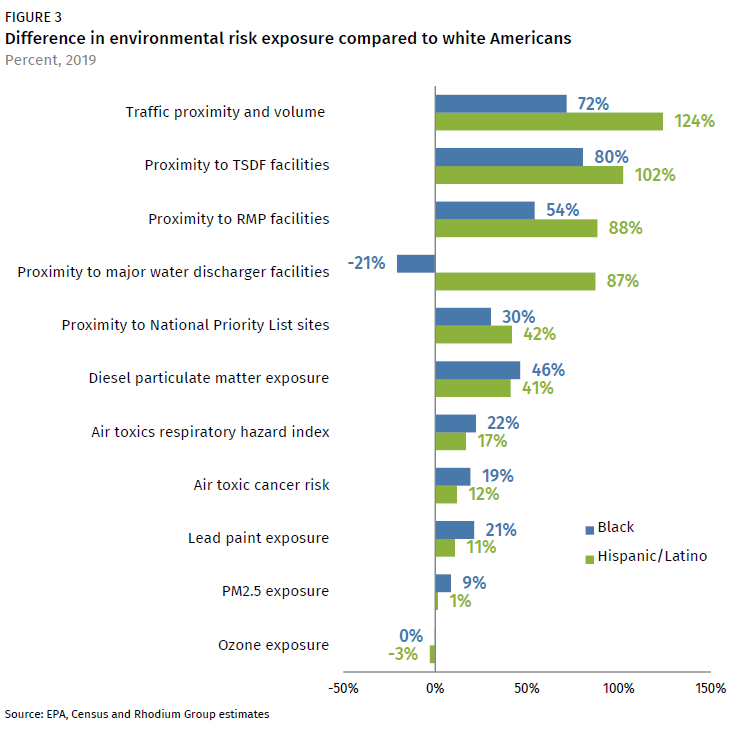 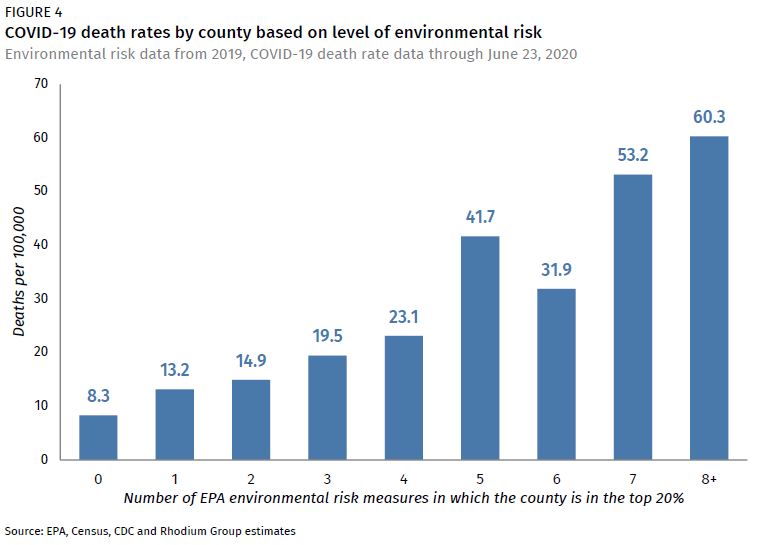 Representatives Grijalva and McEachin, along with 43 of their colleagues, outlined a series of environmental justice investments in a March letter for House and Senate Leadership to consider as part of an economic recovery package. The Grijalva-McEachin letter contains 16 separate proposed measures that address environmental justice on four fronts: clean water, clean affordable energy and housing, zero-emissions transportation, and pollution reduction. In this analysis, we assess the employment impacts of the 11 programs contained in the letter with proposed funding levels of at least $500 million (Table 1). The proposal represents total one-year funding of $107 billion across these 11 programs. This is larger than the roughly $90 billion in clean energy spending contained in the Recovery Act of 2009, and alone represents 0.6% of 2019 US gross domestic output. The proposal targets investment in communities that have borne the brunt of both historical environmental pollution and the COVID-19 pandemic and is viewed by its authors as one component of a broader environmentally sustainable economic recovery effort. 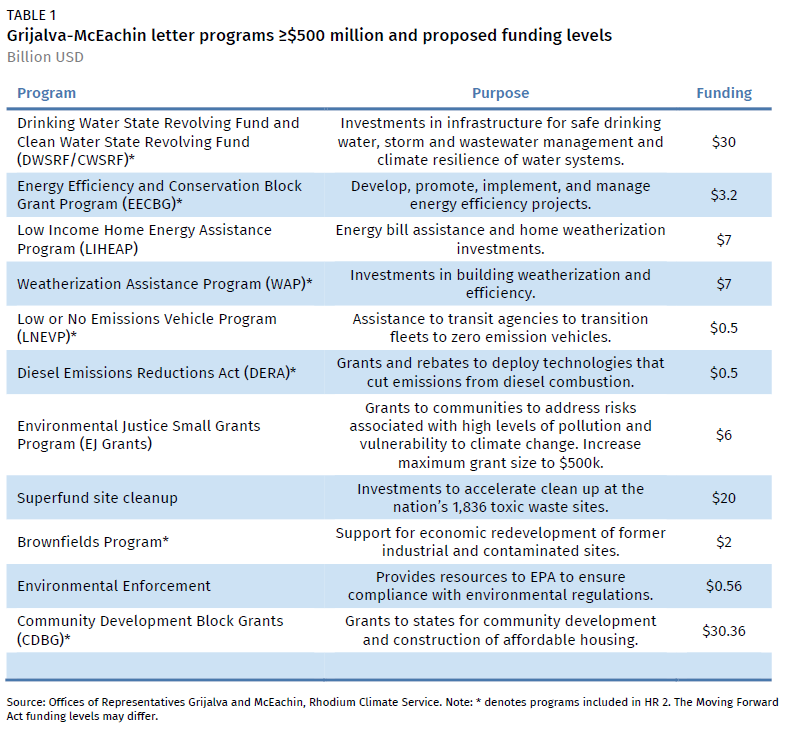 The programs in the letter addressed environmental injustice in a variety of ways. Superfund and Brownfields programs clean up toxic and contaminated sites often located in low-income communities and communities of color. State Revolving Funds for water programs provide much-needed money to remove contaminants from drinking water and clean up streams and rivers. LIHEAP provides utility bill assistance, and WAP invests in cost-effective energy savings measures to reduce energy costs (Black households pay more for energy than white households in the US). DERA and the Low or No Emissions Vehicle programs cut harmful air pollution from the transportation sector, and CDBG invests in affordable housing.

Given the diversity of environmental benefits from the proposed funding in the letter, we do not attempt to quantify all of the energy, environmental and distributional impacts of it in this brief analysis. Instead, we focus on the employment impacts associated with the proposal, a critical issue given the historic unemployment underway across the US.

We use the IMPLAN model to quantify the jobs associated with increased government spending assuming everything is enacted by September of this year with funds disbursed to implementing agencies in FY2021. IMPLAN (Impact Analysis for Planning) is an economic input-output model designed to estimate national and economic impacts for a given change in industry spending. IMPLAN estimates the direct, indirect, and induced economic impacts, including changes in employment, that result from a change in the economy—in this instance, a proposed $107 billion federal stimulus package.

We quantify the direct, indirect jobs and induced jobs associated with each program. We assess the aggregate job impacts of all programs in the proposal as well as individually.

Exactly when and where the jobs associated with these programs will materialize will depend on a variety of factors including:

With this in mind, we report only national totals for each program and job category in terms of average annual jobs associated with this spending each year through 2025. One thing to note is that while programs do provide important and much-needed services and reductions in exposure to pollution in disproportionately impacted communities, they do not necessarily end up employing people residing in those communities. Policymakers may choose to add provisions that attempt to increase hiring from within the communities the programs are intended to support.

For many of the programs contained in the proposal, the funding request represents a step-change from recent levels—from as little as a doubling in the case of LIHEAP to as much as a 4000x increase in the case of Environmental Justice Grants (Figure 5). While higher levels of funding will provide more pollution reductions to impacted communities, it will take time for the administrative capacity of federal and state agencies to adjust and respond to a large injection of funds. Staff and budget cuts happening now due to the financial fallout of the pandemic represent an additional challenge if no additional federal relief is provided to states. This could delay the employment impacts associated with these new funding levels.

Many programs in the proposal require states or other entities to match a share of federal dollars with their own depending on the type of projects receiving funding. These include the DERA, LNEVP, the DWSRF and CWSRF as well as CDBG. We do not include any matching funds in our estimates given the dire budgetary circumstances nearly all states are dealing with at the moment. If states and entities do match federal dollars, then the $107 billion federal program funding will result in more jobs than reported in this analysis. Conversely, if cost-share requirements are maintained, cash-strapped cities and states may not be able to receive federal funds, and employment impacts will be lower. 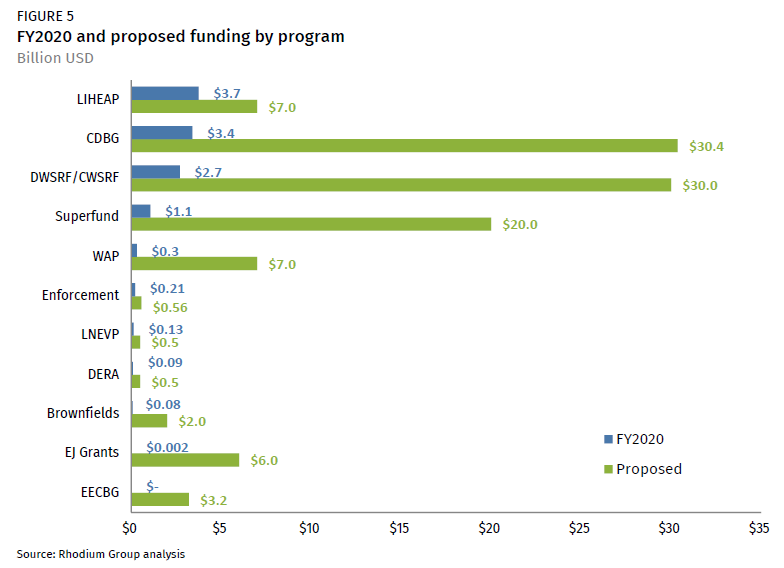 We find that new ramped up federal investment in environmental justice programs can catalyze meaningful new employment opportunities in the US. Nearly 300,000 total jobs could be created and sustained on average over the next five years if the proposal is enacted (Figure 6). Of that, nearly 104,000 jobs are directly associated with federal spending. While these figures are not nearly as large as recent unemployment claims, they do represent an opportunity to increase employment while also addressing the critical needs of environmental justice communities. 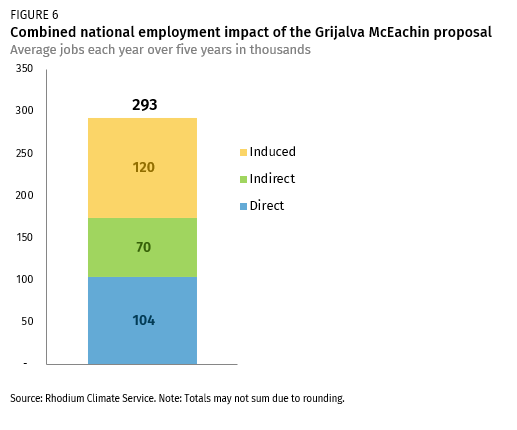 Looking at each program individually, we find that CDBG, the DWSRF/CWSRF and Superfund have the highest employment impacts at 92,000; 84,000; and 51,000 total jobs associated with these programs respectively each year over five years (Figure 7). Relative job impacts across programs are largely a function of funding levels, and these programs receive the highest levels of funding. Differences between direct and total jobs reflect different kinds of activities associated with program spending. For example, LIHEAP primarily provides energy bill assistance to low-income families. There are few direct jobs associated with the program, but a relatively large amount of induced jobs as these families have more resources to spend on other essential services. Meanwhile, WAP funds energy efficiency building retrofit programs leading to direct employment in construction, manufacturing, and professional services. These workers then spend money in the communities where they work, leading to changes in induced jobs. 17,000-18,000 total jobs per year are associated with Environmental Justice grants, LIHEAP, and WAP programs each over five years. The EECBG and Brownfields programs are associated with 7,000 and 4,000 jobs respectively and, increased enforcement, DERA, and Low and No Emissions Vehicle Program are associated with an estimated 1,000 total jobs per year each over five years. 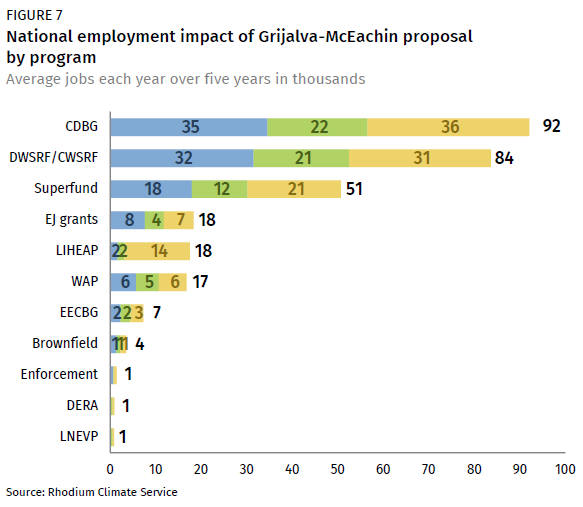 A down payment on a more environmentally just future

The COVID-19 pandemic has laid bare a number of stark and systemic inequities in the US economy and public health system. This includes the disproportionate impact that air and water pollution have had on Black, Latino, and Indigenous communities for decades, the same communities that are disproportionately impacted by the pandemic today. As Congress turns their attention from near-term relief to investing in a sustainable economic recovery, investments in the kinds of programs outlined in the Grijalva-McEachin letter can both make a meaningful contribution to national job creation and serve as a down payment on creating a more environmentally just future.