Following the Baoshang Bank seizure on May 24, Beijing’s dilemma between financial reform and financial stability is clearly in view. Only administrative pressure on large banks to maintain short-term lending to risky institutions is currently preventing a larger credit crunch. The interbank market tension is weakening Beijing’s overall control over China’s macroeconomy, and despite assurances of stability, we expect additional credit events and financial system turbulence.

You Can’t Always Get What You Want

China’s financial system has entered a new era in the last two months, as risks have emerged that strike at the heart of economic and financial stability.  For the first time since 1998, a financial institution in China has failed, and markets must price that failure into dealings with other institutions.  This counterparty solvency risk has been a key component of credit risk in other economies, but has not existed until recently in China, where financial stability was buoyed by the belief that government-backed financial institutions are effectively guaranteed.

That assumption has now expired. Baoshang Bank’s seizure by regulators on May 24 has created structural liquidity distribution problems in China’s interbank money market, which is vital to the financial system’s overall function. The market’s liquidity chain, with money lent from policy banks and large banks to small banks and then to non-bank financial institutions (NBFIs), remains ruptured, even as the central bank tries to piece it back together.

However, authorities did not act capriciously, even if the Baoshang failure seems to have been foisted upon Chinese regulators at an awkward time.  The central bank chose explicitly to impose haircuts or discounts on corporate and interbank Baoshang depositors even while guaranteeing household and small deposits: they did not choose to fully support all depositors.  By addressing some systemic risks officials necessarily create new counterparty credit risks: breaking moral hazard is difficult to do.  Beijing cannot drive the probability of bank defaults back to zero, nor do they want to. Additional bank defaults have to be possible if system-wide risk taking is to be managed.

The dilemma is fundamental: Does Beijing want the market to price the risk of potential bank failures, or do authorities want “stable” production of riskier and riskier forms of credit?  Beijing can have one or the other, not both.

The PBOC’s initial foray in managing the financial stress produced by Baoshang was to send a message that this failure is a one-off related to political affairs—the bank’s primary shareholder was the Tomorrow Group controlled by arrested financier Xiao Jianhua.  However, no one knows exactly why this political risk suddenly materialized in late May, and Baoshang’s financial asset profile is similar to many other banks that are in similarly vulnerable positions, particularly under new accounting standards (IFRS 9).  Some of these banks are listed and some are not, but larger banks are treating many of them similarly: by reducing the number of banks with whom they are willing to do business.

Because markets quickly started seeing similarities between Baoshang and the Bank of Jinzhou, a listed bank in Hong Kong whose external auditors recently resigned, the PBOC was forced to provide emergency assistance to that bank, effectively guaranteeing its interbank borrowing through negotiable certificates of deposit (NCDs).

We wrote about the fundamental contradiction at the heart of the PBOC’s position last year in Credit and Credibility, especially the inherent tension between reform and financial stability.  Stability requires extending PBOC guarantees into increasingly risky and peripheral asset markets.  Reform requires paring back those guarantees, as the default of Baoshang has done.  But the PBOC cannot distinguish between appropriate and inappropriate pricing of market risks as guarantees are withdrawn, because there is no history of defaults, and market risk has been created as a direct result of PBOC policy.  What market prices and reductions in trading volumes are consistent with effective pricing of counterparty risks, and what prices are instead indicative of an unhealthy contagion that can lead to crisis? Beijing – and investors in China’s markets – are grappling with these questions.

But the PBOC is Projecting Stability, and Forcing Banks to Lend Quietly

For many years, any time that negative news about China’s economy or financial system would arise, Beijing asserted that negative consequences were intentional, and had been anticipated.  Problems flagged by the foreign press or the financial community were “manageable,” “controllable,” and exaggerated.  So it is today, in the wake of the Baoshang seizure.  Officials emphasize effective monitoring of the situation, with teams dispatched in several banks.  Messaging claims that interbank liquidity conditions are normal.

Obviously this can only be taken seriously to a limited extent. The PBOC has no history in managing counterparty solvency risks in the interbank market.  They just created these risks seven weeks ago. Moreover, the evidence is right in front of us in the form of NCD sell-through rates in the markets, which show that small banks rated AA+ and below are still selling only 20-50% of their interbank NCDs offered in recent auctions, even over the past week (Figure 1), down from 65-75% before May 24.  If large banks are comfortable lending to small banks, why won’t they buy their NCDs, which are claims on banks’ creditworthiness? 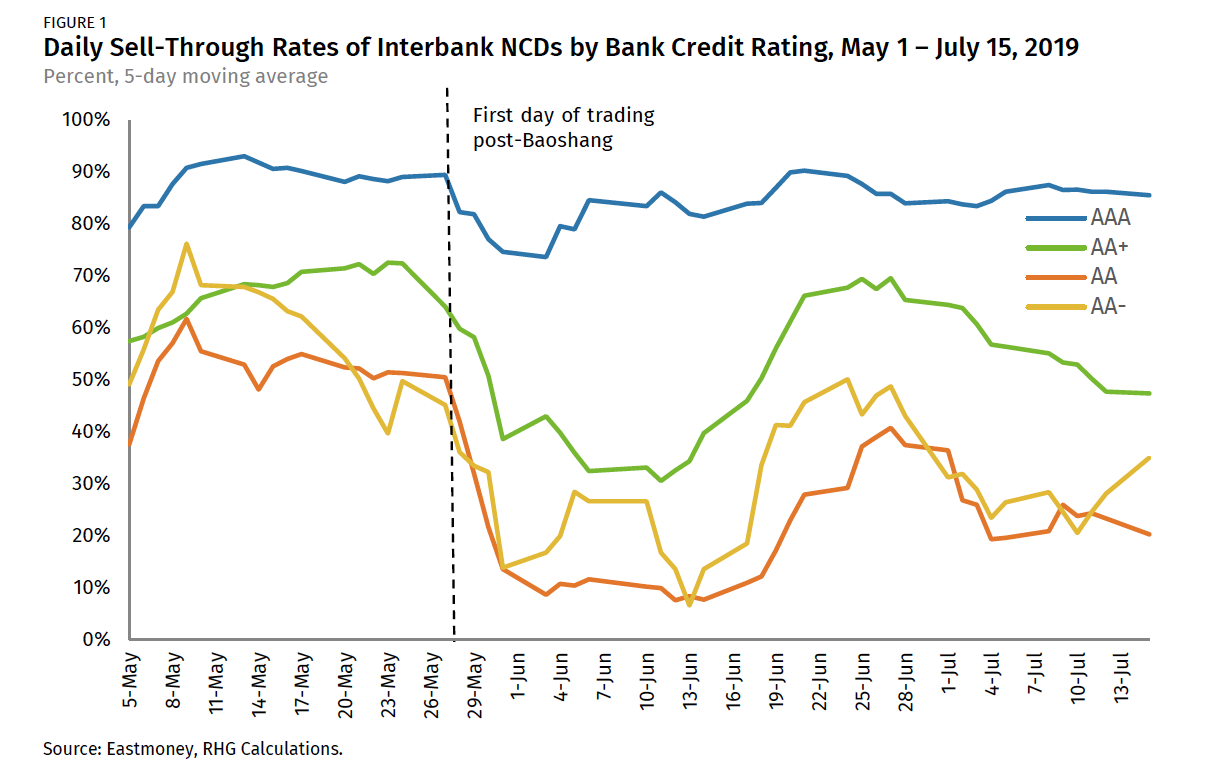 We can see what Beijing has actually done to stabilize the interbank market from June financial system data.  Smaller banks deprived of funding started to redeem investments placed with non-bank financial institutions (NBFIs): those banks’ “shares and other investments”, a reasonable proxy for claims on NBFIs, fell by 413.6 billion yuan in June.  NBFI deposits at small banks similarly fell by 491.2 billion yuan, a significant adjustment.[1]  This means that small bank balance sheets are contracting and NBFIs are forced to react to the sudden withdrawal of funding, possibly by liquidating assets such as government and policy bank bonds.

However, those liquidations have not occurred yet in any size because of the other side of the equation: Beijing is forcing large banks to lend short-term money to risky NBFIs to prevent contagion from spreading.  We can see this in the “reverse repo” lending from the PBOC’s data, where large banks increased short-term lending by 1.13 trillion yuan.[2] Actual loans to NBFIs still dropped overall, by 16.2 billion yuan in June, and NBFIs’ deposits dropped as well, primarily at smaller banks.  This isn’t real lending, it’s just short-term cash to prevent a more significant credit crunch.  Market sources indicate that Beijing “window guidance” is no longer guidance but outright directives to lend to larger NBFIs.  Forcing banks to lend to unhealthy and highly leveraged institutions is not a sustainable solution.

The counterparty risks created by the Baoshang seizure have not disappeared despite these efforts, and they will not go to zero.  Additional credit events and defaults by NBFIs or smaller banks will occur.  When they do, claims of stability from authorities are actively dangerous, because they undermine trust and credibility.  And as our Credit and Credibility argued, the integrity of government interventions over time—that these backstops of the financial system would be timely, sufficient, and successful—has been a critical anchor of stability and the most important defense against financial system crises over the last decade.

Let’s Get Real: Control Over the Economy is Weakening

Interbank market tensions will not be confined to the dark corners of China’s financial system: they have significant effects on the real economy when smaller bank balance sheets contract, because those are the risk-taking institutions in China.  This also impacts the fiscal policies essential to supporting growth today, because weaker local banks starved of funding are unable to lend for local government infrastructure projects.  China’s financial system depends upon large banks lending to small banks, because the PBOC only transacts with larger banks.  Break the liquidity chain and Beijing’s control over the entire economy weakens.

At a PBOC press conference following the release of the June credit data on July 12, an official commented directly on post-Baoshang interbank market conditions.  He noted that interbank business had fallen from its previous levels, but for most banks remained around 80-90% of pre-May 24 norms. This he described as “reasonable”.  The problem is that for many small banks, particularly those that have grown at the fastest rates in recent years, interbank liabilities are 30-35% of their total liabilities.  If there is no growth in these liabilities, or an outright contraction, credit growth weakens, with real impacts on small businesses, sole proprietorships, households, and local government-linked companies.

Beijing cannot restore faith in implicit guarantees or see interbank business return back to pre-Baoshang levels, as policy-makers try to arrest the aggressive expansion of small financial institutions and push for deleveraging. Investors will need to reprice risks in the market and small banks will inevitably face balance sheet contractions and higher funding costs, which also means higher interest rates for their borrowers.

With diminished control over the pace of credit growth, official influence over macroeconomic conditions is more limited.  Fiscal policy is already highly accommodative and cannot alone support economic conditions, even if fiscal deficits and bond issuance expand.  The Baoshang seizure threatens Beijing’s control over the economy and financial system: putting the pieces back together is far from straightforward.   Despite assurances, expect more credit events and financial system turbulence.