Booster or Brake? COVID and the Belt and Road Initiative

As the COVID-19 pandemic thrashes the global economy, a key question is how outbound financing for China’s Belt and Road Initiative (BRI) will be affected. Before the crisis China’s policy banks were already reducing new BRI loans. Now there is much speculation about Beijing opening the door for its institutions and firms to go on a buying and lending spree, given global needs and lower prices for assets. The question is whether China’s financial system permits that, given China’s ongoing domestic challenges and the need to prioritize investment at home. China’s long-term strategic answer to that is uncertain, but three short-term dynamics are clear:

If Beijing wants to keep BRI lending in high gear, it can. Policy banks are in a position to sustain the 2015-2019 pace. BRI loans are just a small part of China’s overall lending portfolio, and China Development Bank (CDB) and China Export-Import Bank (EXIM) have enough political backing to bear the cost.

Playing savior is cheap. Given the COVID-19 impact, China could achieve the same proportional impact on emerging and frontier markets, and the same or greater political goodwill, even with diminished financing.

Forbearance is not just for home team debtors. Regardless of new lending, Beijing will have no choice but to defer and renegotiate past loans across the world this year as macro conditions deteriorate.

Understanding China’s 2020 BRI outlook requires understanding the extent to which Chinese policy banks (EXIM and CDB, the key BRI financiers in the first five years 2015-19) have the capacity to continue lending.

Growth of project activity was already decelerating before the COVID-19 outbreak. Over the past three years Chinese overseas loan-making plateaued or even decelerated in most of the developing and emerging world. 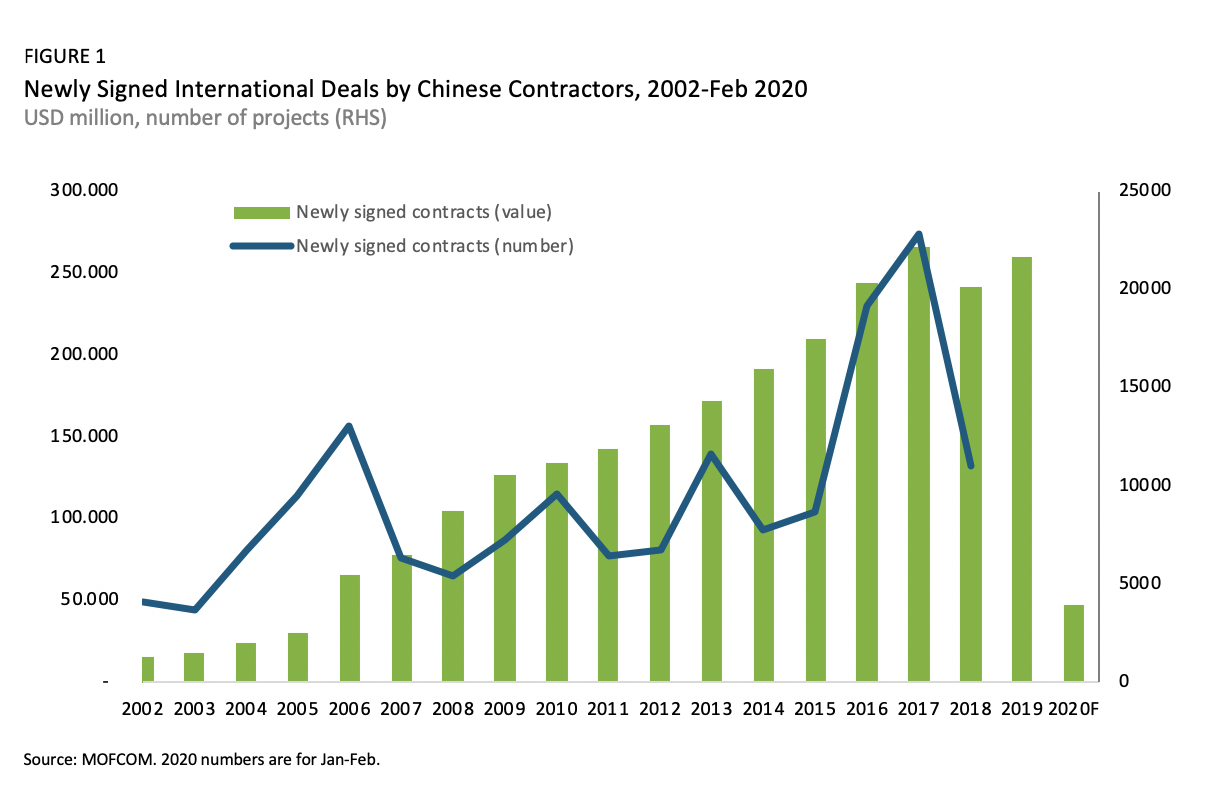 Chinese policy bank lending to Latin American governments and state-owned enterprises and China’s financing to Pacific island countries dropped in 2018 and 2019. And after a boom year in 2016 (of USD 29 billion) Chinese lending to Africa reverted to pre-2012 levels in 2017 (USD 16 billion).

In short, loans to key BRI destinations were already slowing before the COVID crisis, due to a mix of criticism from some recipient countries, financial headwinds inside China generated by “deleveraging” a frothy banking system, balance of payments concerns and a subsequent push by Beijing to improve lending practices.

The cautionary shift on outflows is amplified by the COVID crisis. In 2019 we saw the first bank failures in China since the 1990s (starting with Baoshang Bank in Inner Mongolia). The virus has since bankrupted millions of Chinese businesses, ending their loan repayments and causing a sudden stop in cash flows at millions of others. Larger firms are under severe strain as well. This means intense pressure on the domestic financial system which is coloring the cost-benefit assessment of commitments overseas.

At the same time, opportunities for China to play a savior role worldwide have boomed, and China’s money stretches further as conditions around the world deteriorate and desperation sets in. There is obviously a foreign policy impulse for Beijing to make use of these circumstances, burnishing its investment portfolio at the same time as it bolsters China’s diplomatic image as a dependable development partner – especially compared to the actions taken by the United States in some instances. Depressed market demand inside China further encourages Beijing to pursue construction, transport or energy SOE projects overseas with export credits and other tied lending support

These conflicting motives – grasp the opportunity but be more conservative – are both present in Beijing’s policy deliberations and action to date. In their handling of debt issues, Chinese authorities and lenders are also taking commercial factors into consideration, amid their concerns about domestic financial priorities and the danger of extending another round of loans abroad that they might regret. This is not that different from other investment decision makers right now. Commercial captains around the world are asking whether the risk of distressed invetments is justified by the potential returns. But Beijing’s tendency to inject its political aspirations into the commercial sphere in recent years has blurred the line.

We think this is tipping the nation toward a first order economic correction in the medium term, but the safest bet for 2020 is that: 1) Beijing will maintain some level of BRI financing, but not grow it, and 2) will claim deferral and renegotiation of BRI debt (soon likely required under a global moratorium on poor country debt repayments) as a Chinese contribution to recovery rather than a sign of poor lending practices.

Further financing is no issue

Two things are clear. First, if Beijing wants to continue lending at the previous pace – to fulfill either diplomatic or commercial objectives – it can, as the government can recapitalize external lenders out of foreign exchange reserves and extend loans using policy bank balance sheets. Even though asset quality at CDB and EXIM is suspect, both still enjoy full state support, and consequently have stable funding bases, especially compared to smaller banks. Even as CDB is tapped to support China’s economy with new domestic loans, sustaining current BRI lending levels is not difficult. Estimated annual Chinese BRI loans of $50-60bn at the 2015-2016 peak were trivial compared to RMB 18.1 trillion (USD 2.6 trillion) in total 2019 Chinese bank lending.

Second, to achieve political, diplomatic or economic goals overseas, Beijing today will need to spend less than in the past. Given COVID stress, any support from China – be it lending to bridge current needs, grants or zero-interest loans, aid in the form of protective equipment, or swap lines to fund dollar requirements – will be welcomed.

New actors will also step in. Companies such as Huawei had already become lenders helping to finance China’s BRI promises. Much like they are now used at home to bridge financing gaps, with state firms asked to provide advanced payments to their suppliers rather than relying upon commercial banks to expand loans to smaller enterprises, Chinese firms could become new channels of Chinese funding to developing and emerging economies.

But Beijing will have to renegotiate existing loans first

Before rolling out new financing Beijing will be faced with renegotiating the existing loan book. As the virus spreads, China’s developing country clients can’t maintain their obligations to Beijing.  The past decade saw renegotiation cases multiply quickly. Our database of Chinese loan renegotiations shows that most of these have happened since 2014 (22 of 27 cases), and the amounts under renegotiation have increased (Figure 2) 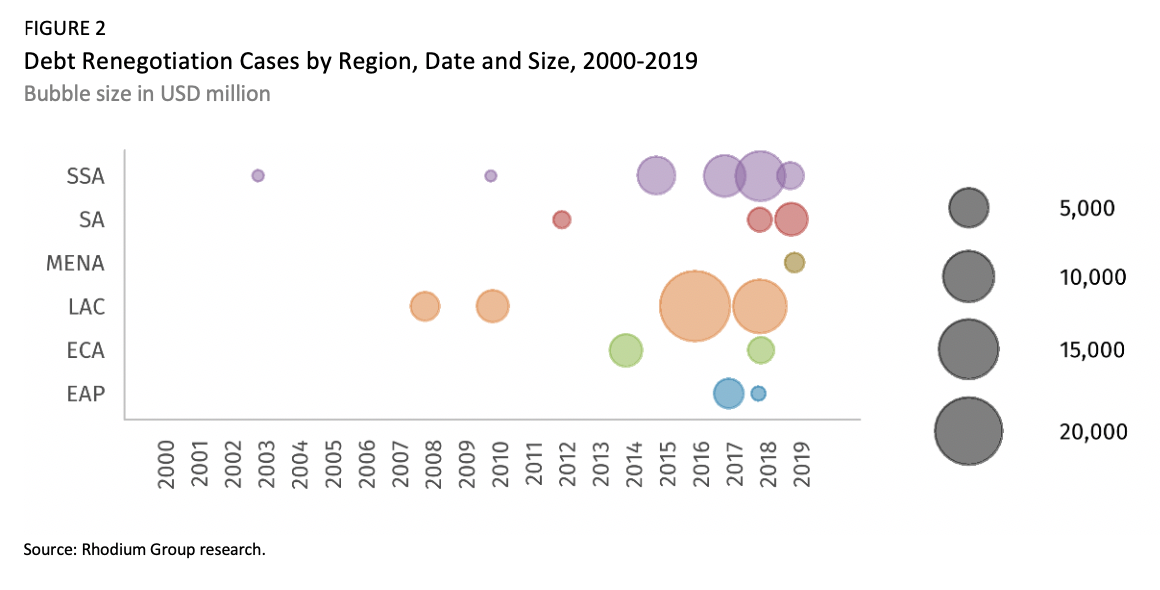 Renegotiation events are bound to multiply in the next couple of years, for three reasons.

Emerging market debt risks have risen starkly over the past 5 years partly due to Chinese lending, and partly due to those nations borrowing on international capital markets in the form of Eurobonds. Alignment with China was often seen as  guaranteeing repayment of these bonds. Current risks are most serious in low-income countries (LICs): in February 2020, the IMF found that more than half of these were in or at high risk of debt distress. Most loans to LICs take the form of Chinese or international commercial-term debt, often in foreign currencies. This means severe growth in interest burdens when foreign exchange pressures sharpen, as they have this year.

Repayment requirements for many BRI recipient countries were just about to ramp up this year and next regardless of the crisis. BRI lending peaked in 2015-2016 as the initiative was rolled out (see signed contracts in Figure 1, for example). As Chinese loans extended for energy or transport infrastructure projects typically have a 5-6 year grace period, recipients will need to start repaying many of these in 2020-2021.

This all means a huge process of loan renegotiation with Beijing is hard-wired into the picture. We find $63bn in BRI loans renegotiated to date (non-ZILs). Compared to liberal estimates of China’s outward lending through 2017 from Horn, Reinhardt and Trebesch (2019), this suggests that as much as 16% of China’s overseas lending has been subject to renegotiation so far. If the volume of actual disbursed lending is lower than Horn, Reinhardt, and Trebesch estimate, the  share of renegotiations is higher (up to 20-25%). In light of the COVID shock Chinese lenders will likely face an avalanche of renegotiation in the near future, which may limit their appetite to expand outbound lending substantially.

China has the means to continue financing overseas ventures and provide development assistance. Given pressing needs worldwide we expect Beijing to redouble small loans, grants, and material aid shipments to alleviate pain where it can. China’s means and capacity to do so are strong, and the costs are low, especially when compared to the goodwill potentially built. Yet in light of the need for debt renegotiations it is unlikely the Beijing will return to 2016-2017 levels of new BRI commitments. That ship had sailed before the COVID crisis, and likely won’t return in the near future. Instead, we would expect Beijing to focus its resources on dealing with debt renegotiation as best as it can.

This will be a tough exercise. Beijing will have to handle criticism from a public that might condemn reckless lending abroad when needs are so high at home. It will need to preserve good relations with debtors, who might resent any relief package terms even if concessionary. And Beijing must work with other major lenders, as no single creditor can work out terms without coordination. Beijing should be open to a coordinated, global moratorium on LIC debt repayments this and maybe next year. We have shown that renegotiation is typical for China: deferral or grace period extensions have been preferred options for large loans (Figure 3). 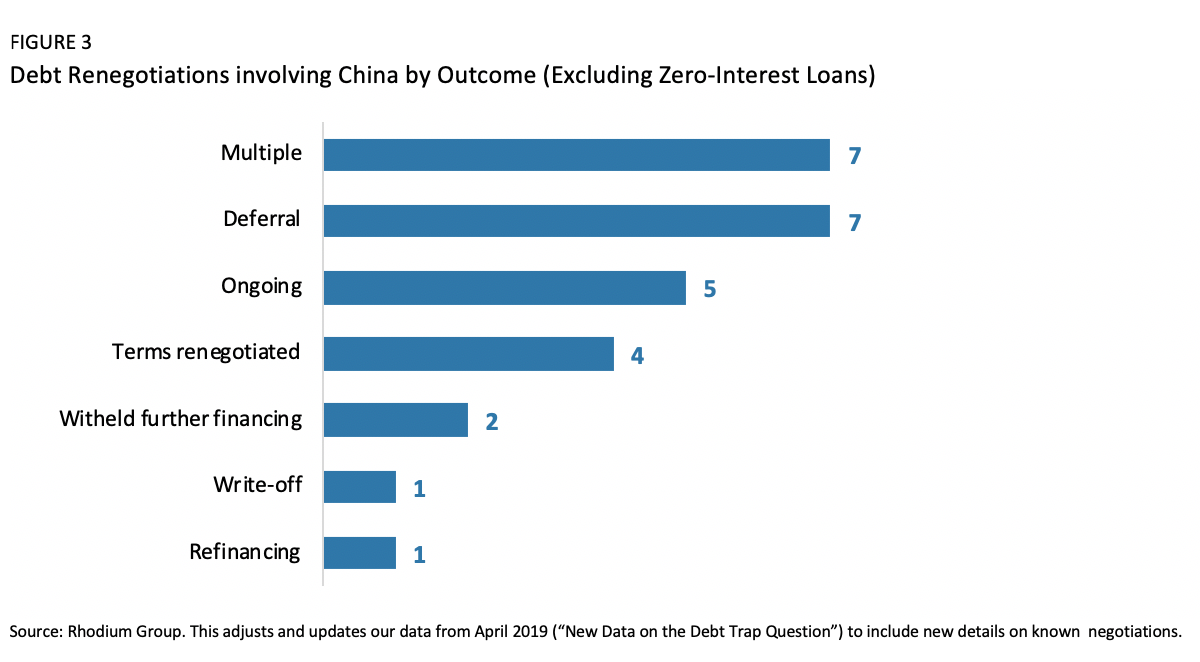 Some of these past cases have seen repayment periods lengthened by as much as 10 years, and grace periods extended where needed. This could be replicated, given the gravity of the situation. Beijing has shown limited willingness to forgive debt – it has only done so for small zero-interest loans to date. We doubt China will agree to a significant haircut on its substantial overseas loan portfolio.

China has declared broad forbearance on debt repayment at home, so the logic of doing so abroad is not a leap.  This would best be pursued in parallel with the IMF, Paris Club and other development finance initiatives. Writing off a part of the amounts due this year – likely to be a fraction of the initial 2016-2017 BRI surge of $50-60bn per year – would mean a substantial but bearable haircut. This is an important opportunity for China to demonstrate international leadership and promote debt sustainability.