How does economic reform relate to China’s future economic growth potential? How big a difference does the difficult undertaking of changing the rules of the marketplace make? The answer determines whether the risks associated with reform are really worth it. In our analysis of China’s continuing growth prospects, we put the growth outlook together in a transparent way, and include scenarios for what happens if reform falls short. We find that Beijing can hope to deliver 6% annual growth come 2020 – if it does everything right. Checking with Chinese officials we find they come to the same conclusion – as do IMF economists in their new calculations. If reform comes up short, the story is more dire and China can only look forward to 1-3% GDP growth six years from now. Chinese officials share that view, and recognize that social stability is tough at those levels, which is why they are so intent on changing business as usual today.

2020 outlook: Our baseline expectation is 2020 annual GDP growth of 6%. This assumes China’s ambitious economic reform program is fully implemented. Our two downturn scenarios – what the future looks like if reform miscarries – forecast the impact of hard-landing and crisis on China’s potential growth.

View from China and view from the Fund: Recent estimates from China’s leadership and the IMF coalesce around a 6% growth story for China in 2020. While our estimates vary in a few important ways, the IMF’s downward revision to China’s growth potential is consistent with our forecast.

Conclusions: China can only count on capital deepening for half of its 2020 growth potential. The other half depends on what economists call total factor productivity, or TFP. This would be the fruit of urgent, pro-market reform: adjustment of which sectors get labor and capital, how rapidly technology advances, and whether wealthier, skilled Chinese keep their assets at home rather than sending them abroad. The challenge is that this depends on rapid transformation of financial intermediation and implementation of many other reforms. Failure to accomplish those tasks would leave GDP growth somewhere between 1-3% in 2020.

Our model for China’s potential growth to 2020 is summarized below (Table 1), with GDP growth rates year by year and resulting GDP values in constant 2013 dollars – meaning all values can be understood in today’s purchasing power terms. We explore three scenarios: our baseline, the highest likelihood soft landing outcome; a hard landing; and a crisis scenario. We incorporate these projections into a major forthcoming Asia Society study of China’s reform program to be released this fall.

We start by considering projections from the IMF, the World Bank, the Hong Kong Monetary Authority, the Chinese State Council, and private analysts, and then make adjustments based on our analysis of reform prospects. This is growth accounting: adding up possible increases in the factors that go into production (capital, labor, and “improvements”, including technological upgrading and structural adjustment) to get a more productive mix. Economists call that final set total factor productivity, or TFP. 2020 labor force growth in China is zero. Capital stock growth – if all goes well – could contribute three percentage points to GDP growth, as investment growth moderates from current rates that have pushed the debt to GDP ratio to 251% (and rising), according to Stephen Green at Standard Chartered Bank. Given China’s past performance, it is conceivable that it could generate another three percentage points of growth from TFP improvement come 2020, if reform and better enforced regulations dramatically change the industrial mix (so that private, sunrise industries get resources for a change), for a total potential of 6%.¹ 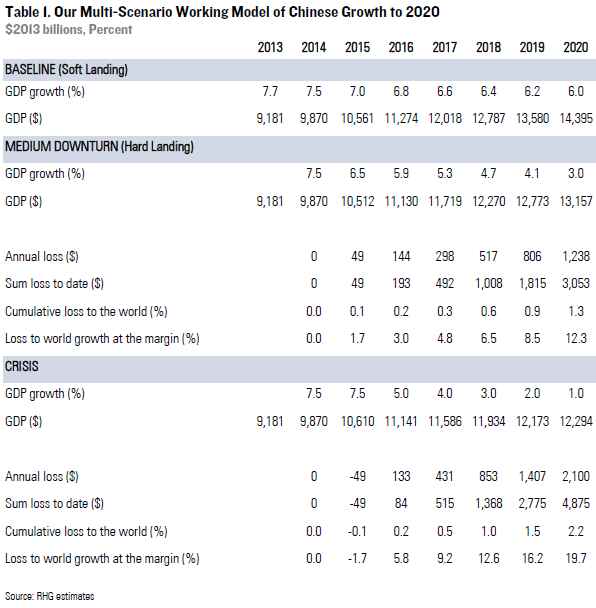 Our analysis of the Chinese reform program and implications for China’s GDP outlook has been in the works since Chinese leadership broadcast an economic reform plan last November, pledging to give full play to market forces. As our outlook has taken shape, we continue to benchmark our views against other estimates, including China’s and the IMF’s, which just updated its long-term projections. In the following section we walk through these alternative outlooks and relate them to our own.

2020 OUTLOOK: COMPARISON WITH CHINA AND IMF

Hitting this year’s GDP target of 7.5% is a sensitive political subject which Chinese officials have little room to discuss. Finance Minister Lou Jiwei and the NDRC tried to move away from a dogmatic growth number back in April, but in the face of market anxiety Premier Li re-emphasized the primacy of the target in May and June. But talking about 2020 is okay. While a few growth-at-all-costs proponents still trumpet higher numbers, consensus is coalescing around a 6% 2020 outcome, with a 6.5% average for the five years to come – a major area of agreement with the model in Table 1. The official Chinese version of this trajectory foresees 20 million people urbanizing a year through 2020 (higher than we think) and electricity consumption growth of 6-7% through the decade (also higher than we are expecting, though we are working to understand why).

More important is a second area of agreement: what the downside risks to potential growth are and how low GDP growth would be by 2020 if they eventuated. In the hard landing scenario, a failure to implement reform sucks the TFP growth out of the economy, leaving nothing but capital stock growth, resulting in 3% GDP growth. In a crisis scenario, we imagine capital flight and an investment strike following the reform² shortfall, depleting capital stock growth and leaving the Middle Kingdom with barely 1% potential GDP growth – enough, by the NDRC’s reckoning, to generate jobs for just 1.6 million new entrants of the 10 million-plus who will be looking for work. In our model, the longer Beijing buys the kind of 7.5% GDP growth it is gunning for today, with the kind of costly debt creation it is still resorting to, the more likely there will be a crash in capital stock deepening in the out years. Chinese planners appear to share this view, understand that the reform imperative is motivating President Xi and defining China’s long-term growth potential, and agree with the range of downside outcomes. So we are basically on the same sheet music here, at least concerning the future headline GDP growth rate potential, which is about as much as long-term planners can seem to deal with.

Recently, the IMF released its annual report on the Chinese economy known as the “Article IV Consultation” – the results of an annual economic health checkup and summary of vital signs, produced in consultation with Chinese authorities (meaning a consensus must be reached between IMF economists and Chinese leadership). The Fund’s read-out on China’s economic reform agenda and impacts on China’s growth potential is broadly similar to our own. They expect a 7.4% growth rate in 2014 and project three medium-term scenarios for Chinese economic growth as well: fast reform, slow reform (baseline), and no reform.

Our picture differs from the IMF’s in two key ways. First, our baseline scenario assumes the full range of reforms laid out in the Third Plenum reform agenda are installed by 2020; by contrast, the Fund’s baseline assumes steady but slower efforts to implement reform. Their fast reform scenario closer approximates our baseline. Second, their reform scenarios model implementation of financial sector, fiscal, structural, and exchange rate reforms. In addition to those reforms, we consider the importance of redefining government’s role to focus on public expenditure priorities instead of industrial policy, pro-competition policies driving reregulation across sectors, SOE reform, trade and investment reform, land reform, environmental reform, and welfare reform (policy supports for labor and human capital). The IMF’s baseline shows growth falling to 6.3% by 2019, whereas ours shows growth slowing to 6.2% in 2019 and 6% by 2020. Slower growth in the medium-term means faster reform and a lower probability of crisis. Our balance of payments thinking therefore diverges for similar reasons; while the IMF’s current account projection hovers around 1% of GDP through 2023, our current account balance as a percent of GDP falls to zero by 2020. Our projections suggest a modest trade deficit on the horizon, offset by a positive net income figure – both effects of full-blown reform in the medium-term, successfully targeting domestic and external imbalances.

Considering the downside risks to potential growth agreed upon by both Chinese planners and foreign economists, why are we somewhat more optimistic about the balances? Internally, we continue to think the evidence of earnestness in reform since the Third Plenum is more compelling than many observers. On the external side, due to Rhodium Group’s extensive work on China’s outbound foreign direct investment imperatives, we are sensitive to just how important a balance will be to China in the years ahead, despite the indelicate tone Beijing is taking on foreign economic affairs today. Thus, our baseline assumes the fuller reform required to sustain cross-border trade and financial flows in the out years. There are caveats. First, the political challenges to reform implementation are real. The short-term, debt-driven stimulus propping up growth today is already depressing future potential, and if it is not reversed soon a hard landing will become the most likely scenario, increasing the tail risk of crisis, which would shave world GDP by 2.2% over the next six years and could consume some 20% of global economic expansion in the year 2020. Second, security fears can trump universally agreed upon economic logic, and if leaders in Beijing and elsewhere don’t do a better job tamping down rising nationalism, the obvious benefits of economic opening could be foolishly sacrificed to guard against self-generated threats.

President Xi Jinping has smartly observed that China’s market systems must “select the superior and eliminate the inferior”. Government is not smart enough to dictate how resources should flow to make that happen. What is superior and what is inferior is a market decision consumers must make. But the power to do so does not yet reside with China’s consumers; the state still determines outcomes in many respects. Over the last year Chinese leaders have started implementing market reforms, liberalizing finance, and leveling the commercial playing field to drive competition. It now appears they accept that the efficiency possible by switching from state allocation to market intermediation is the difference between 3% and 6% 2020 GDP growth rates. To make this switch the state must forego its monopoly on economic influence in principle and practice. Then high-quality regulatory institutions and talent pools must be built up. These are Herculean tasks. The trillion dollar question is whether a regulatory revolution can happen quickly enough to outrun the tsunami of challenges and enable a 6% 2020 GDP growth outcome.

¹ Here we don’t factor in a likely significant upward revision to GDP by the National Bureau of Statistics after its overhaul of the Chinese national accounts system this year. Neither do we include our working estimates on nominal GDP level from a separate study we are completing late this year.

² See our forthcoming study; we define 10 clusters of policy reform focus, ranging from the financial system to SOE restructuring to competition policy reform and others. All are partly underway already, but could stall.