In the US, there has been growing interest in sector-specific market-based performance standards as pathways to decarbonization, but a major gap in the sectoral standard landscape is industry. The industrial sector is one of the most difficult parts of the economy to decarbonize, and it’s on track to becoming the largest source of US greenhouse gas (GHG) emissions within the next ten years. Emissions from manufacturing comprise more than 60% of total industrial emissions in the US. Though manufacturing is a diverse subsector, a majority of emissions come from the production of a small set of GHG-intensive products, including basic chemicals, iron and steel, cement, aluminum, glass, and paper. In this report, we propose a novel market-based standard for manufacturing, a clean products standard (CPS), which could reduce emissions from the manufacture of these GHG-intensive products.

A CPS would establish the maximum amount of GHGs per unit of material produced that can be emitted in the production of covered industrial products sold in the US. In developing and implementing a CPS, policymakers will be faced with a set of key design choices, which we outline in this report. Most of these choices require a balance between the ambition of the policy and the administrative complexity of its implementation. Other design choices can help maintain US manufacturer competitiveness and prevent emissions leakage. Key design elements of a CPS include product coverage, compliance metrics, point of obligation, accounting for imports and exports, use of covered products as intermediate inputs, and flexibility options.

Following the failure of cap-and-trade legislation to pass the US Senate in 2010 and continued challenges in generating legislative support for an economy-wide carbon tax, many in the climate policy community have begun looking for other options. There is growing interest in sectoral market-based performance standards as an alternative to carbon pricing. Performance standards already play a significant role in the transportation and buildings sectors at both the state and federal level. These include federal Corporate Average Fuel Economy (CAFE) and carbon dioxide emissions standards and state-level zero-emission vehicle standards for light-duty vehicles, as well as efficiency standards for appliances. A growing number of states have adopted clean energy standards (CES) for the electric power sector, and a number of CES bills have been introduced in Congress.

A major gap in the sectoral standard landscape is industry. Under current policy, Rhodium estimates industry will surpass transportation and the power sector and become the largest source of US GHG emissions within the next ten years (Figure 1). Under most carbon pricing proposals, industrial decarbonization is achieved by imposing a tax (or allowance purchase requirement) on industrial emitters, but also on importers of GHG-intensive manufactured goods to prevent a decline in US competitiveness or “leakage” of emissions overseas. As focus has shifted from economy-wide carbon pricing to sectoral performance standards, very little work has gone into developing a strategy for industrial decarbonization that could fit within this new framework. 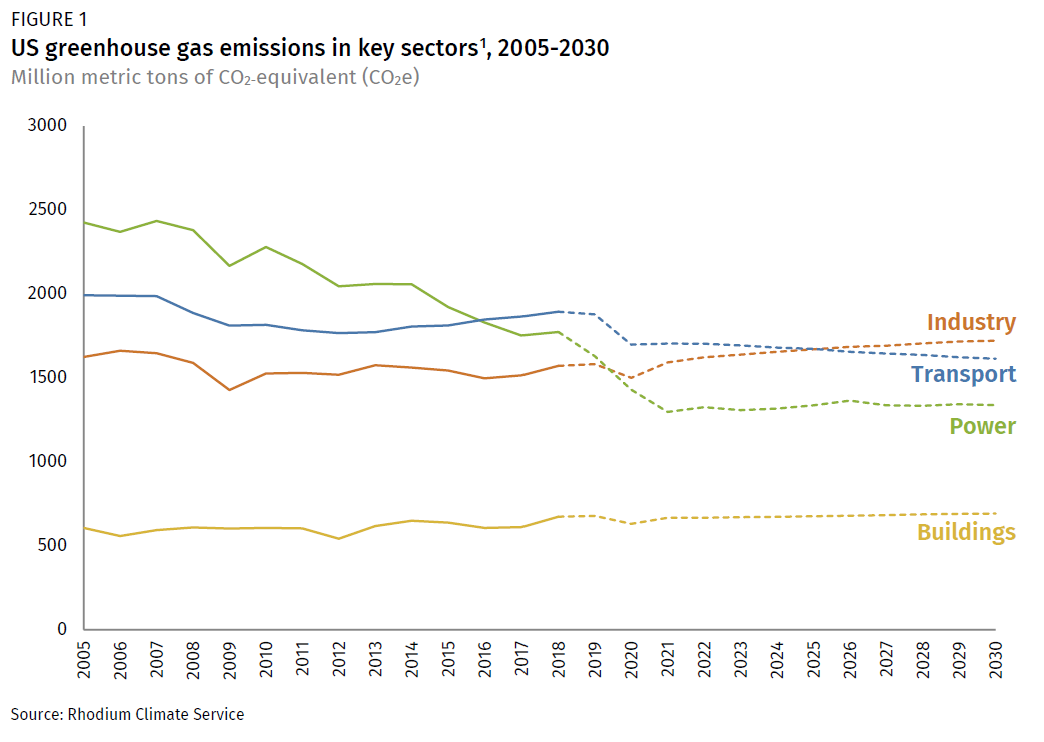 A clean products standard (CPS) is a novel proposal to create a technology-neutral, market-based sectoral standard to decarbonize the production of a set of basic manufactured materials. A CPS establishes the maximum amount of greenhouse gases (GHGs) per unit of material produced that can be emitted in the production of covered industrial products sold in the US. Covered products can include steel, cement, glass, and chemicals. Manufacturers can employ any technological or process-based solutions that allow them to meet the emissions limit. These solutions include the use of low-carbon electricity, liquid fuels, and feedstocks, as well as process and efficiency improvements and deployment of carbon capture systems. The stringency of the standard for each product category tightens over time, creating regulatory certainty for an ambitious but achievable path toward deep decarbonization. The breadth of products covered by the standard can also expand over time.

To avoid the potential for adverse competitiveness effects and emissions leakage, a CPS applies to all designated products sold—not just produced—in the US. A CPS could also be expanded to encompass final consumer products that rely heavily on CPS-regulated inputs. A CPS allows for trading of CPS compliance credits, similar to other market-based policies like a cap-and-trade policy or a clean energy standard. We discuss important design considerations and trade-offs relating to a number of these factors in greater detail in the full report.

This nonpartisan, independent research was with support from Breakthrough Energy. The results presented in this report reflect the views of the authors and not necessarily those of the supporting organization.