Climate Progress in the Year-End Stimulus

Long past the 11th hour, Congress passed a raft of legislation funding the government for 2021 and nearly a trillion dollars of much-needed COVID-19 fiscal relief for businesses and consumers. As part of this legislative push, Congress also included the first major climate legislation in over a decade and a surprise package of tax credit extenders. All together, the package represents the most significant action on climate and energy in over a decade. This time, the highest-impact provisions focus on phasing down superwarming hydrofluorocarbons (HFCs) and advancing carbon capture and storage. Over the next 15 years, the HFC phasedown will reduce 900 million metric tons (MMt) of carbon dioxide equivalent (CO2e)—more than the total annual emissions of Germany. Over that same period, additional carbon capture projects could reduce as much as 585 million tons—more than the annual emissions of Australia. In this note, we provide a first take on the energy package and its implications for US greenhouse gas (GHG) emissions. One thing is clear—while Congress has taken the US a step closer in the effort to decarbonize, there is still a long way to go.

After months of stalemate on a COVID-19 relief bill, Congress came together in agreement on a $900 billion package of support for consumers, businesses and for pandemic response. Early in the pandemic, there was hope that Congress may push a bigger comprehensive green recovery package that can jumpstart the tepid economy, accelerate decarbonization of the energy system, and begin to undo the decades of pollution damage to frontline communities. The COVID relief bill does little on this front, but Congress did include bipartisan energy and tax extenders legislation that can be seen as a down payment on further action by the next Congress and incoming President Biden.

The energy package authorizes nearly $40 billion in new research, development and demonstration funding for clean energy. It also overhauls major parts of the Department of Energy’s RD&D programs to focus on a wider array of clean technologies. These include carbon capture for natural gas power plants and industrial sources, carbon removal from Direct Air Capture and other cutting-edge technologies as well as advanced nuclear, next generation renewables and storage. The biggest prize is the formalization of the phasedown of HFC production and consumption in line with the US commitment under the Kigali Amendment to the Montreal Protocol.

Tax extenders of a year or two have become a normal part of the holiday season in recent years and 2020 is no different. The bill generally extends host of popular energy efficiency, vehicle charging and renewable energy tax credits for homeowners by a year. It makes the energy efficient commercial building deduction permanent and extends commercial electric vehicle charging equipment as well as biofuel production incentives. It adds a year to the phaseout schedule for utility-scale tax credits for wind and solar and reinstates a five-year tax credit for offshore wind. The latter provides much needed certainty for the nascent offshore renewable industry. As we explain below, the highest-impact tax credit extender, when measured by the scale of CO2 reductions, is the two-year extension of the section 45Q carbon capture credit.

The investments in RD&D will help prepare the US for deeper decarbonization in the 2030s and beyond as new technologies become commercial. Meanwhile, the shorter-term tax credit extenders will give a small boost for clean energy and drive modest emission reductions. But the big-ticket items in the energy and tax packages are the section 45Q carbon capture credit extension and the HFC phasedown.

Carbon capture is a key technology for decarbonizing the industrial sector and can also play a role in the electric power sector. The revamped 45Q carbon capture tax credit has been on the books since 2018, but final guidance from the Internal Revenue Service (IRS) on how to claim the credit is still forthcoming. Without the tax extension, project developers needed to commence construction before the end of 2023 to take advantage of a credit of up to $50/ton for every ton of CO2 permanently stored underground over 12 years of operation. A $35/ton payment is available for CO2 captured and used in products or for enhanced oil recovery.

The shrinking window to get projects designed, financed, and underway by the deadline and with clarity from the IRS meant about 29 million tons of industrial carbon capture capacity could be deployed based on our estimates. Extending the deadline by two years provides a lot more time for projects in a wide variety of applications to get off the ground. We estimate that the extension could drive 82-142 million tons of total capture capacity before the new deadline at the end of 2025, depending on carbon capture technology costs (Figure 1). That’s an additional 53 to 113 million tons of capture capacity that would not happen but for this new legislation. This step change in deployment will yield meaningful cumulative industrial emission reductions of 342-585 million tons between now and 2035 compared to the original 2023 deadline depending on technology costs (Figure 2). It will take more time to assess what the deadline extension will mean for carbon capture in the electric power sector where technology costs are higher. 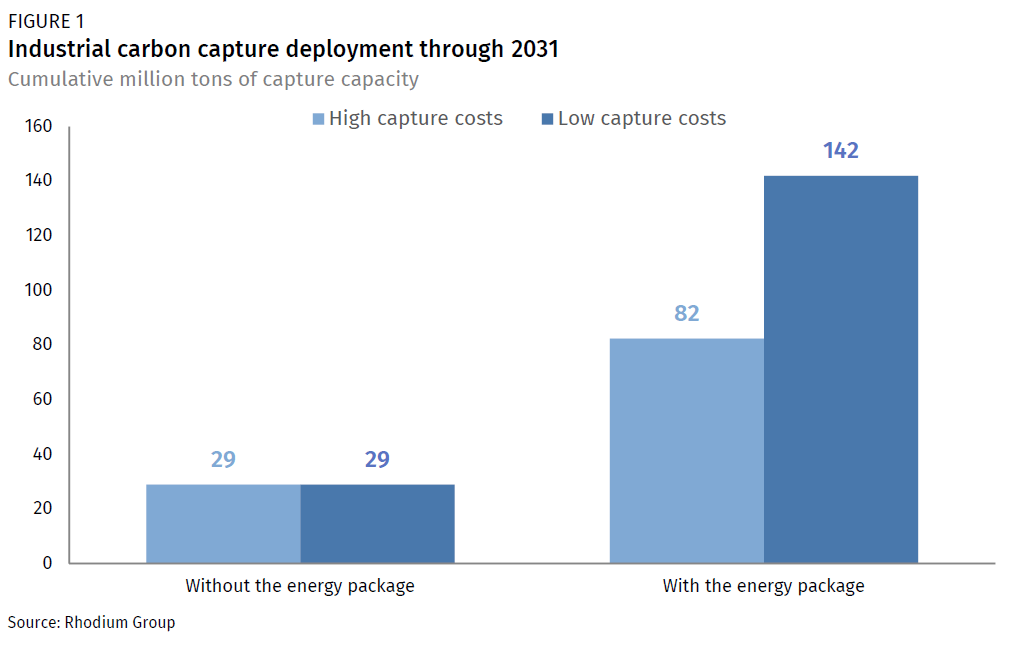 The HFC phasedown may prove to be the single most effective emission reduction measure taken by Congress in over a decade. Proponents have been pushing for its passage ever since the Obama administration helped broker the Kigali Amendment to the Montreal Protocol, which requires all countries to phase down production and consumption of HFCs. While this bill does not ratify that agreement (which would require a two-thirds majority in the Senate), it effectively mandates that the US Environmental Protection Agency implement the same phasedown schedule, achieving an 85% reduction in production and consumption of HFCs over the next 15 years.

Without the phasedown, we project that HFC emissions would have continued to grow significantly despite recent state efforts to reign in emissions. Today HFC emissions are 50% higher than they were in 2005, and we project they will grow to double 2005 levels by 2030, absent new policy. The adopted phasedown in HFC production and consumption will have a lagged impact on HFC emissions as emissions result from leakage over the lifetime of appliances that use HFCs, like air conditioners and refrigerators. Nevertheless, we estimate that the phasedown will quickly curb the growth of HFC emissions, which should peak in the next few years and then decline rapidly, returning to 2005 levels in the early 2030s and continuing its steep decline through 2040. Over the next 15 years, we estimate that cumulative emission reductions will reach around 900 million tons of CO2e (Figure 2). 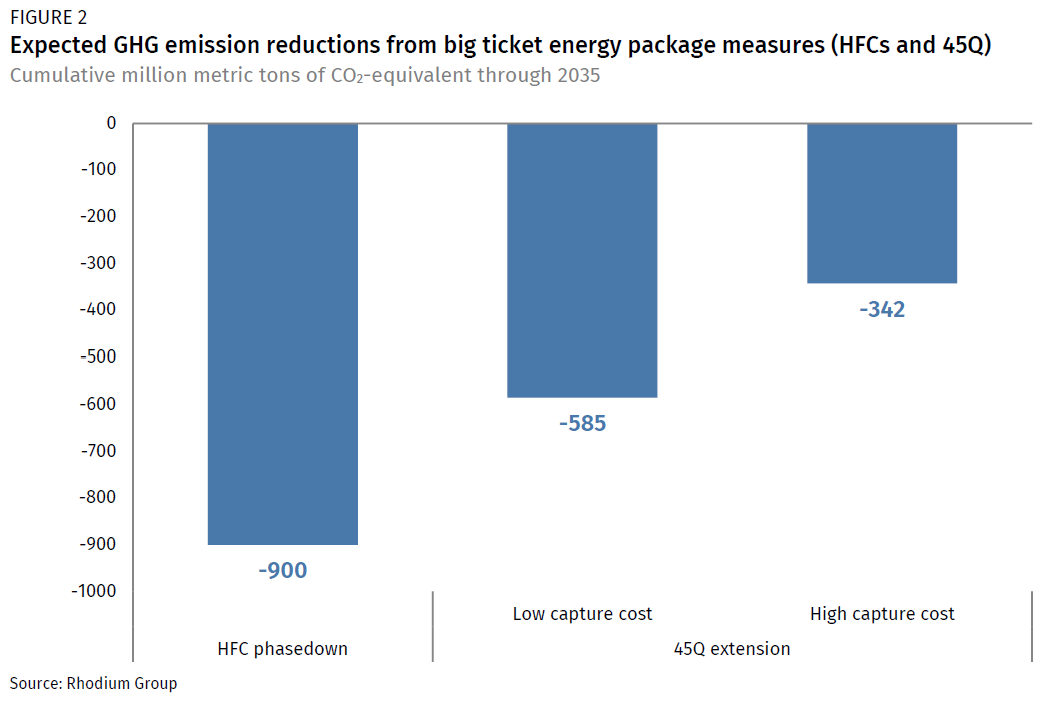 Reversing the impact of climate rollbacks

With the inclusion of the HFC phasedown and the section 45Q carbon capture tax credit extension, the energy package may turn out to be the single most powerful antidote for the last four years of climate policy reversals by the Trump administration. While many important environmental protections were relaxed, we assessed those with the biggest GHG implications in our September note (The Undoing of US Climate Policy). The cumulative emissions impact of the HFC phasedown and 45Q extension over the next 15 years is larger than the combined effect of rolling back both the federal GHG standards for cars and trucks and a package of federal standards regulating methane from oil and gas operations, the most significant climate-related rollbacks under the Trump administration (Figure 3). So, in effect, these two big-ticket energy package provisions may go a long way towards reversing the emissions impact from the last four years of climate rollbacks under the Trump administration.[1] 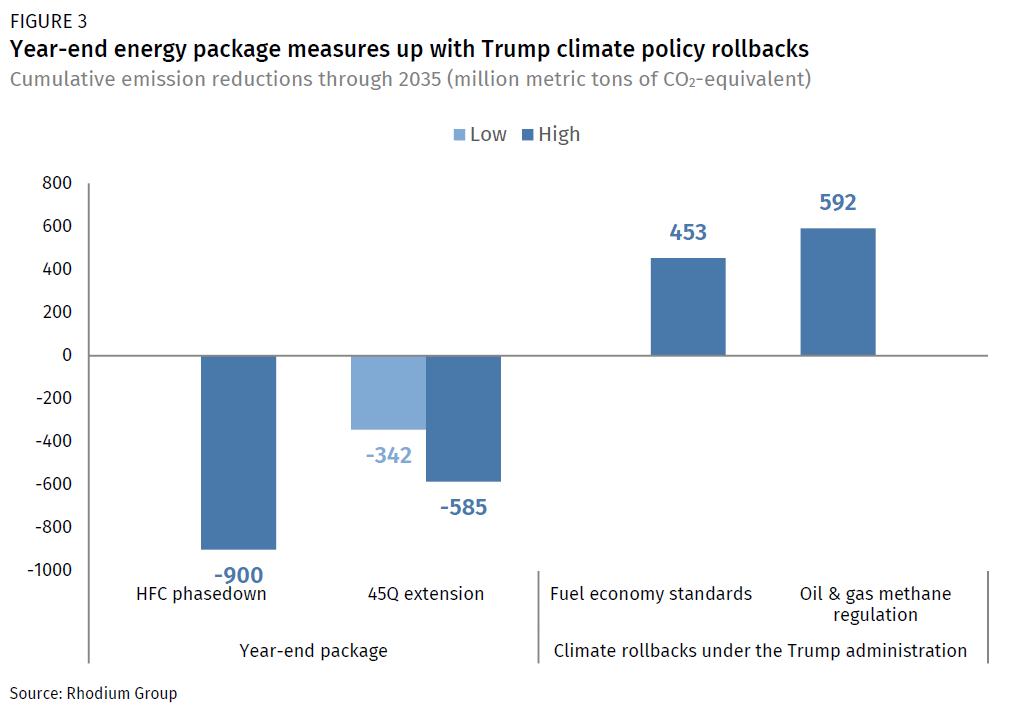 The year-end package can be viewed as a down payment for the next Congress and incoming President Biden on clean energy and climate in 2021. A major clean energy spending bill, investments in infrastructure, agriculture, forestry, as well as a range of new federal executive actions could all build on these steps to add momentum to decarbonization after four years of rollbacks and federal inaction. A lot more needs to be done and there is little time to do it.

[1] Note: We do not count several Trump administration rollbacks, including the Clean Power Plan rollback (as the US is expected to meet its stated goals) and the threat to rescind California’s waiver to set more stringent vehicle GHG standards (which Biden will uphold).