Come and Take It: Revoking the California Waiver

Last month the Trump administration announced it will revoke California’s unique authority to set emissions standards as part of a sweeping rollback of greenhouse (GHG) standards set during the Obama administration. This latest blow would stymie the state’s efforts to tackle GHG emissions from transportation and meet ambitious electric vehicle sales targets through its zero-emission vehicle (ZEV) program. Thirteen other states which follow California’s more stringent standards would also feel the blow. Relative to Obama-era rules, we find that rolling back national fuel economy standards and revoking California’s waiver could reduce the share of ZEVs sold in 2035 by up to 8 percentage points nationwide, which could mean up to 14 million fewer ZEVs on the road by that year. The rollbacks could also boost GHGs by more than a gigaton from 2020 to 2035. This will impact California’s ability to meet air quality and climate targets and the US’s ability to stay within striking distance of GHG reductions needed to limit global temperature rise below 1.5 degrees Celsius.

Many things are uniquely Californian—The Beach Boys, Napa Valley, the Golden Gate Bridge, Hollywood—and the ability to set emissions standards for new motor vehicles. Well, perhaps not for long. The Trump administration is in the process of revoking California’s unique authority to set emissions standards as part of a sweeping rollback of fuel efficiency standards set during the Obama administration. President Trump made claims that revoking California’s waiver will “produce far less expensive cars for the consumer, while at the same time making the cars substantially SAFER.” California, along with 22 other states, Washington, D.C., Los Angeles, and New York City, disagrees and filed a federal lawsuit challenging the Trump administration’s decision to revoke the waiver.

Plagued by smog-filled skies in the 1950s and 1960s, California pioneered annual car emissions inspections in 1966. Vehicle testing was later adopted federally by the Environmental Protection Agency (EPA) as part of the Clean Air Act of 1970. In recognition of California’s first-mover status and tremendous success in improving air quality, the Clean Air Act also gave California the ability to seek a waiver to allow the state to set more stringent emission standards for new vehicles than the federal government.

Since 1970, the federal government has granted California over 100 waivers across a whole range of applications where there are air quality and climate benefits, including vehicle fuel efficiency, engine standards, and heavy-duty and off-road equipment. California waivers do not expire but may be superseded by new waivers, and no waiver has ever been revoked.

The specific waiver under fire was issued by EPA in 2013 to cover California’s Advanced Clean Car regulation. It outlined GHG standards for 2017-2025 model year vehicles and amendments to the ZEV regulation that requires auto manufacturers to offer a specific number of zero emissions vehicles, including full battery-electric, hydrogen fuel cell, and plug-in hybrid vehicles for sale. This waiver is a critical component of California’s plan to achieve federal air quality standards in the South Coast Air District, which includes Los Angeles.

After California obtains a waiver for specified emission standards, Section 177 of the Clean Air Act allows other states that currently or previously have been noncompliant with federal ambient air quality standards to adopt California’s standards as their own. To date, 13 states and the District of Columbia—home to roughly 30% of US vehicle sales—have adopted all or part of California’s regulations.

To understand the potential impact of revoking California’s waiver, we revisit our estimated impact of the Trump administration’s proposed Corporate Average Fuel Economy (CAFE) rollback, which would institute a nationwide freeze of Obama-era fuel economy standards at 2020 levels. For this analysis, we also capture the impact of ending California and other participating states’ authority to set ZEV sales requirements for automakers.

Relative to the existing Obama administration vehicle efficiency standards, we estimate that revoking the California waiver and freezing fuel efficiency standards at 2020 levels will reduce ZEV sales by 7 to 8 percentage points in 2035, depending on the projected price of oil (Figure 1). This translates to about 12 to 14 million fewer ZEVs on the road by that year. In our modeling, roughly three-quarters of the ZEV sales lost can be attributed to weaker fuel economy standards nationwide, while the other quarter is due to the rollback of ZEV programs that would have boosted sales in California and the other participating states. 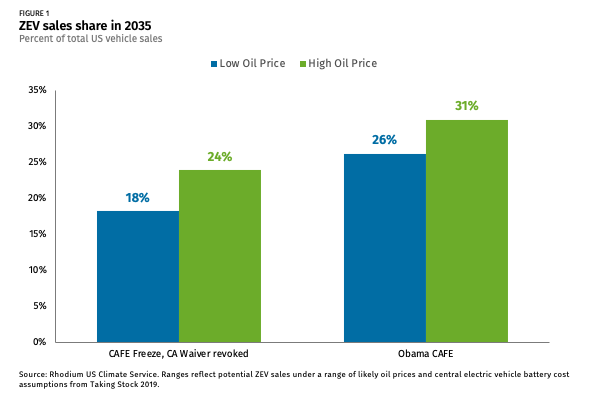 Revoking the California waiver will also increase GHG emissions. From 2020 to 2035, we estimate that rolling back both fuel economy standards and the California waiver could increase emissions by 1,055 to 1,317 million metric tons cumulatively relative to Obama-era rules (Figure 2). If instead California and Section 177 states maintain their own Obama-era GHG standards and keep their ZEV programs in place, emissions rise by less than half as much over the same time frame. For comparison, total US GHG emissions from transportation were roughly 1,900 million metric tons in 2018. 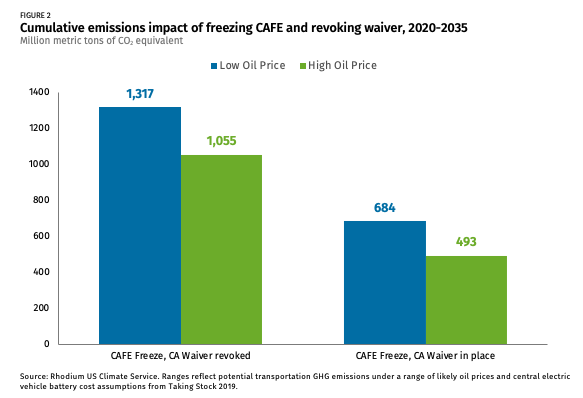 Come and Take It

California’s response to the waiver revocation was swift. Along with 22 other states, Washington, DC, Los Angeles, and New York City, California filed a federal lawsuit against the Trump administration challenging the decision to revoke the waiver. This is expected to be a lengthy legal battle, with EPA and the National Highway Traffic Safety Administration (NHTSA) finalizing the revocation later this year. At the same time, California is embroiled in an ongoing conflict with the EPA and Justice Department over the state’s voluntary agreement with automakers that would circumvent Trump’s proposed rollback of fuel efficiency standards. California was able to bring automakers to the table on fuel economy standards because of its influence. California is the single largest market in the country for new cars and light trucks, and the state has a history of setting regulatory precedents for other state capitals and, under previous administrations, for the nation. If the Trump administration pushes forward to eliminate California’s ZEV program, they may find the state is able to work directly with automakers to meet their targets.