Cutting Through the Fog: FDI in China Since COVID-19

The resilience of foreign direct investment (FDI) in China has been the subject of intense debates in recent years. China’s official figures show record FDI inflows since the COVID-19 outbreak in 2020 but a rapid decline in the second half of 2022. Alternative data points suggest a more prolonged slowdown in new investment that began in 2020. In this note, we examine available data sources to assess China’s FDI performance since 2020 and discuss the outlook. Our key findings are:

Official figures showing record FDI in 2020 and 2021 were inflated by short-term investments fueled by unique macroeconomic conditions. China’s high interest rates and currency strength enticed global investors to move money into China. A substantial portion of these short-term capital flows was recorded as FDI, rather than portfolio (or other) investment—as they would have been in an open market economy without capital controls and foreign ownership restrictions.

The reality of China’s FDI trajectory in the first two years of the pandemic is more subdued. Alternative datasets point to a sharp decline in new greenfield projects and foreign acquisitions over the 2020-2021 period, in line with real economy trends. While datasets that aggregate disclosed FDI transactions may be underestimating inflows—because MNCs have grown more reluctant to announce their China investments publicly and because these datasets do not fully capture multi-year greenfield projects—the reality is less rosy than the official figures suggest.

Since 2Q 2022, inflows have slowed sharply in response to global monetary conditions as well as macroeconomic and geopolitical headwinds. The sea change in global interest and exchange rate expectations, a downward revision of China’s growth prospects, and an increasingly challenging international policy environment suggest China is headed into a period of structurally lower FDI inflows, barring meaningful policy reform in Beijing that rekindles foreign investor enthusiasm.

China’s official FDI statistics show that it became the world’s largest recipient of FDI in 2020 and continued to attract investment from abroad at a high level in 2021 and through 1H 2022. Both available measures—data from the State Administration of Foreign Exchange (SAFE), which uses balance of payments (BOP) standards, and data from the Ministry of Commerce (MOFCOM), which measures “utilized FDI” based on the directional principle—show record inflows since the pandemic outbreak (Figure 1). SAFE data records an average quarterly FDI inflow of $89 billion, almost double the pre-pandemic average. 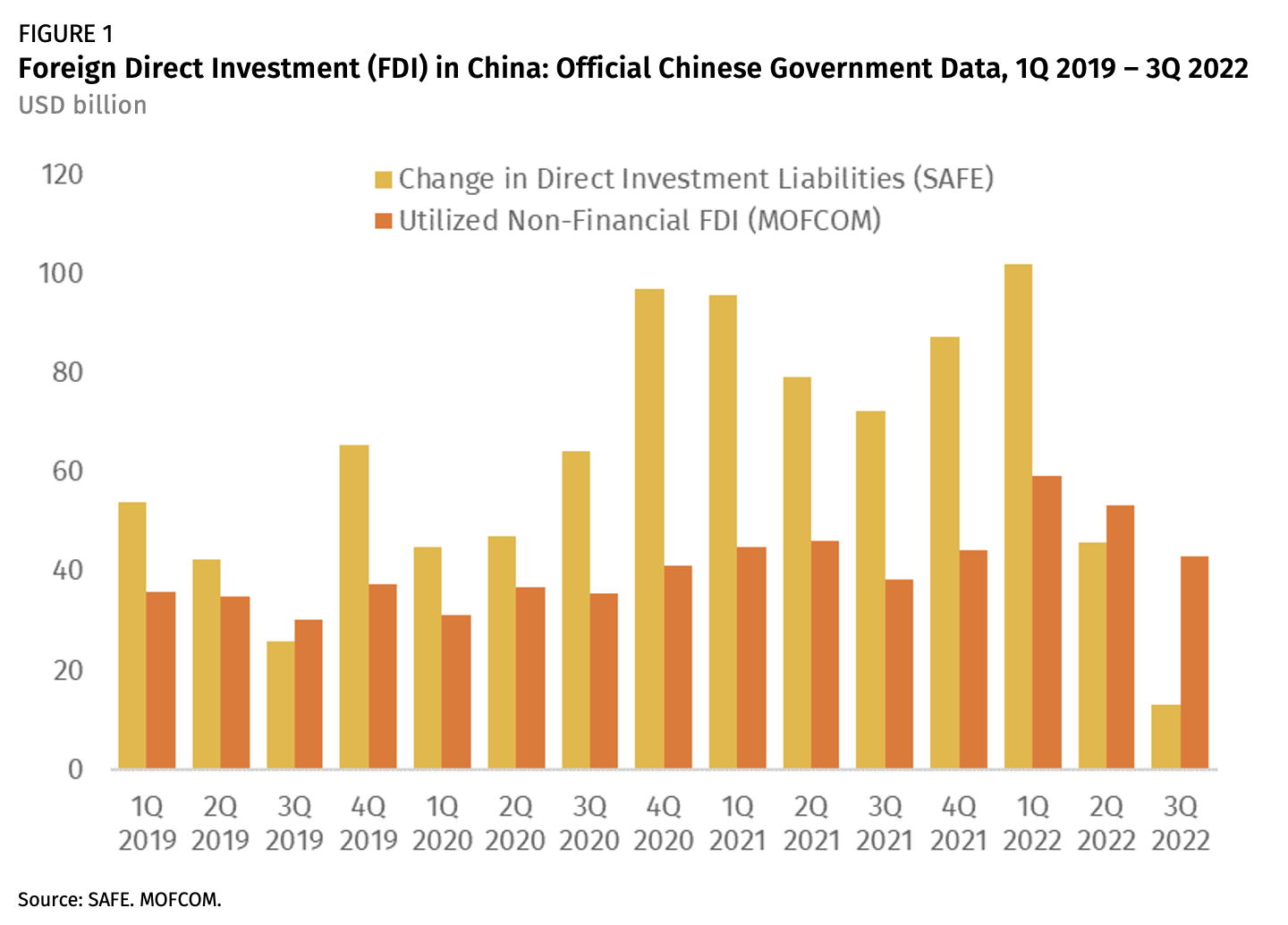 The strength of FDI inflows during a period of severe pandemic-related disruptions and rising geopolitical tensions is curious but needs to be seen in the context of China’s peculiar external economic policy configuration. Openness toward FDI was an early feature of China’s economic policy approach, but other types of cross-border capital flows–-especially portfolio investment and other short-term flows of a more speculative nature—remained more tightly controlled. Market participants have thus relied upon FDI structures to funnel money in and out of China, including for financial purposes that would ordinarily be captured in other channels of the financial account.

One such channel is capital from offshore fundraising in Hong Kong and other jurisdictions. Offshore fundraising by Chinese firms boomed from 2017 to 2021, and the peculiar legal structures used to get around capital controls (such as variable interest entities, where offshore entities “own” a subsidiary in China, which then “owns” the interest in the operating entity in China) resulted in some of these funds being classified as FDI instead of portfolio investment. A significant portion of these funds flows from Chinese state banks and investors to Hong Kong and is then funneled back as FDI into China (“round-tripping”).

A breakdown of China’s official FDI statistics illustrates how important this phenomenon is. Hong Kong, the Cayman Islands, and Singapore together accounted for 78% of MOFCOM’s total utilized FDI in 2020, a figure that has increased steadily from 60% in 2010. Over that same period, China’s official data on FDI inflows has increasingly “decoupled” from mirror data on FDI outflows to China provided by counterpart governments (suggesting that these governments are recording these outflows in other BOP categories). For example, official data from Hong Kong and Singapore–-two of the most important sources of FDI for China—show that FDI flows are either flat or declining and at much lower levels (50-60%) than what MOFCOM figures suggest since 2015/2016 (Figure 2). 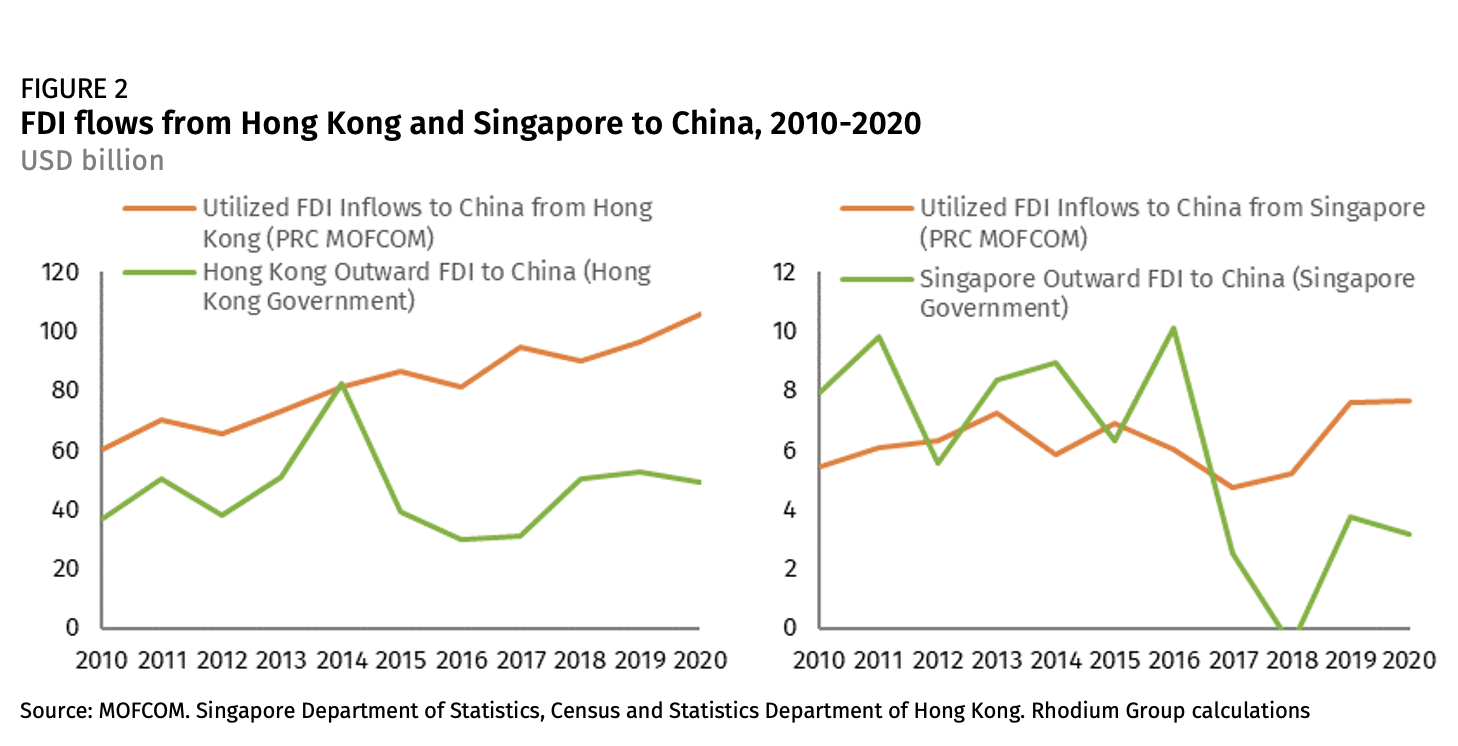 One way to illustrate how much financial and macroeconomic arbitrage considerations are influencing China’s FDI inflows is to plot SAFE’s quarterly FDI inflow data against the interest rate spread between the US and China (see Figure 3, using the USDCNY 12m FX swap points). It shows that FDI inflows strongly correlate with market expectations of rising exchange rates and high interest rate spreads. Inflows have skyrocketed since 2Q 2020 as investors decided to keep existing earnings in China and raise additional cash at low interest rates abroad and channel it into China to benefit from higher interest rates and exchange rate appreciation. Conversely, the rapid shift in global monetary conditions since 1Q 2022 has triggered a complete reversal of China’s FDI fortunes: Inflows went from a record high ($102 billion in 1Q) to a 20-year low ($13bn in 3Q) within just six months. 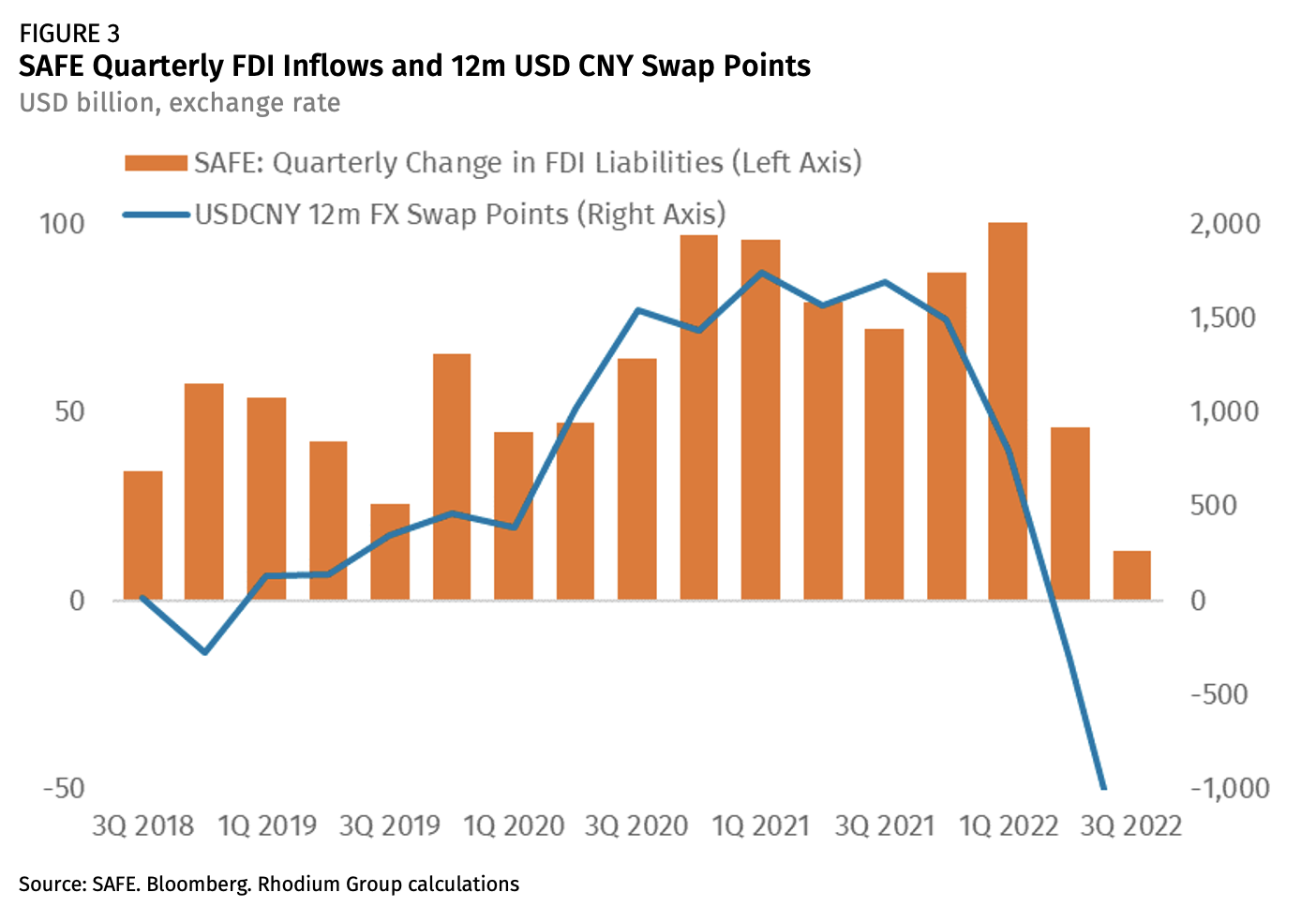 With all of these factors distorting the official statistics, it is important to consider micro-level transaction data to get an alternate perspective on FDI trends in China. There are a number of these transaction-level datasets out there, all of which show a significant decline in activity in recent years.

One of the most comprehensive sources for global greenfield FDI trends is fDi Markets from the Financial Times. According to fDi Markets, the value of newly announced greenfield FDI projects in China started to decline from previous trendlines in 2020, then stabilized in 2021 before falling to its lowest level in almost 20 years in 1H 2022 (Figure 4). The recorded total for 1H was $6 billion, which puts China on track to receive only a fraction of the $69 billion a year it received on average in the period from 2015 to 2019.

Data on inbound mergers and acquisitions (M&A) to China is available from many commercial data providers and shows a similar trend. Data from Bloomberg shows that, on average, China attracted foreign M&A bids worth around $60 billion annually from 2015 to 2019. In 2020 cross-border M&A transaction value dropped 38% before stabilizing in 2021. From January to July 2022, China only recorded $15 billion worth of inbound M&A transactions, putting it on track for the lowest annual level in more than ten years if the trend holds. 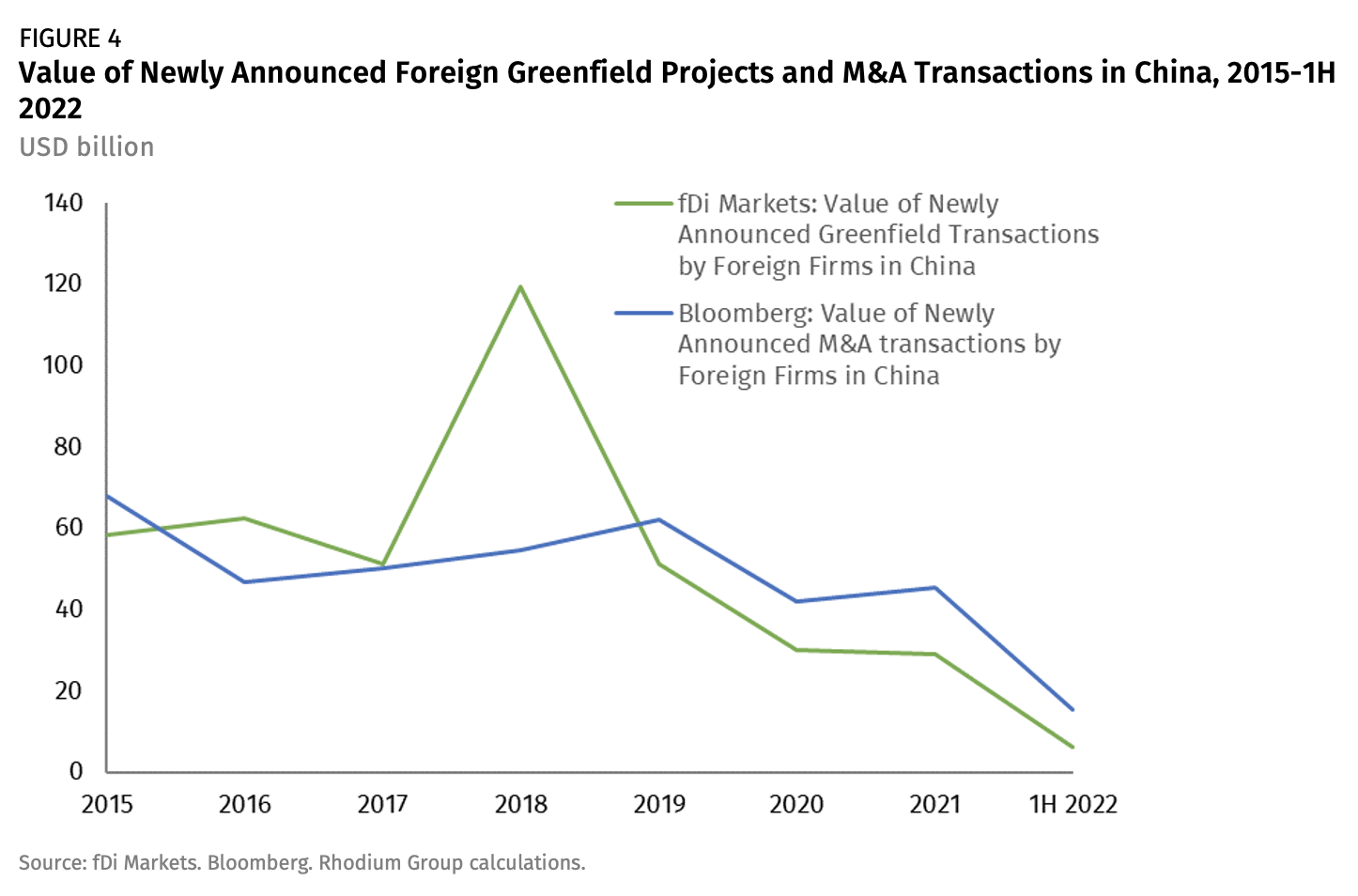 A Floor for FDI: The Stickiness of “Made in China, for China”

While the alternative data pointing to a sharp decline in FDI is more in line with the economic realities in China in 2022, it also has its flaws. It most certainly undercounts large greenfield investments by established foreign players for local consumption, which has become an increasingly important driver of FDI in China. These investments are undercounted for two reasons.

First, spending on large greenfield projects is spread out over multiple years. If a $10 billion project was announced in 2015, that total is often prescribed to the quarter in which it was announced, whereas the actual cash flow is disbursed over a longer period, sustaining FDI flows even if no new projects are announced. Long-term investments, with spending spread out over time, have played a significant role in supporting China’s inbound FDI. Figure 5 shows a Rhodium Group dataset on EU FDI transactions in China to illustrate the importance of multi-year projects.

Second, once a project has been completed, it will often lead to further expansions. These expansions, often funded by retained profits, are missing in some measures of FDI in China because they focus on initially announced values. As operating and expanding in China has become politically sensitive, companies are increasingly reluctant to publicly announce further spending or new projects. 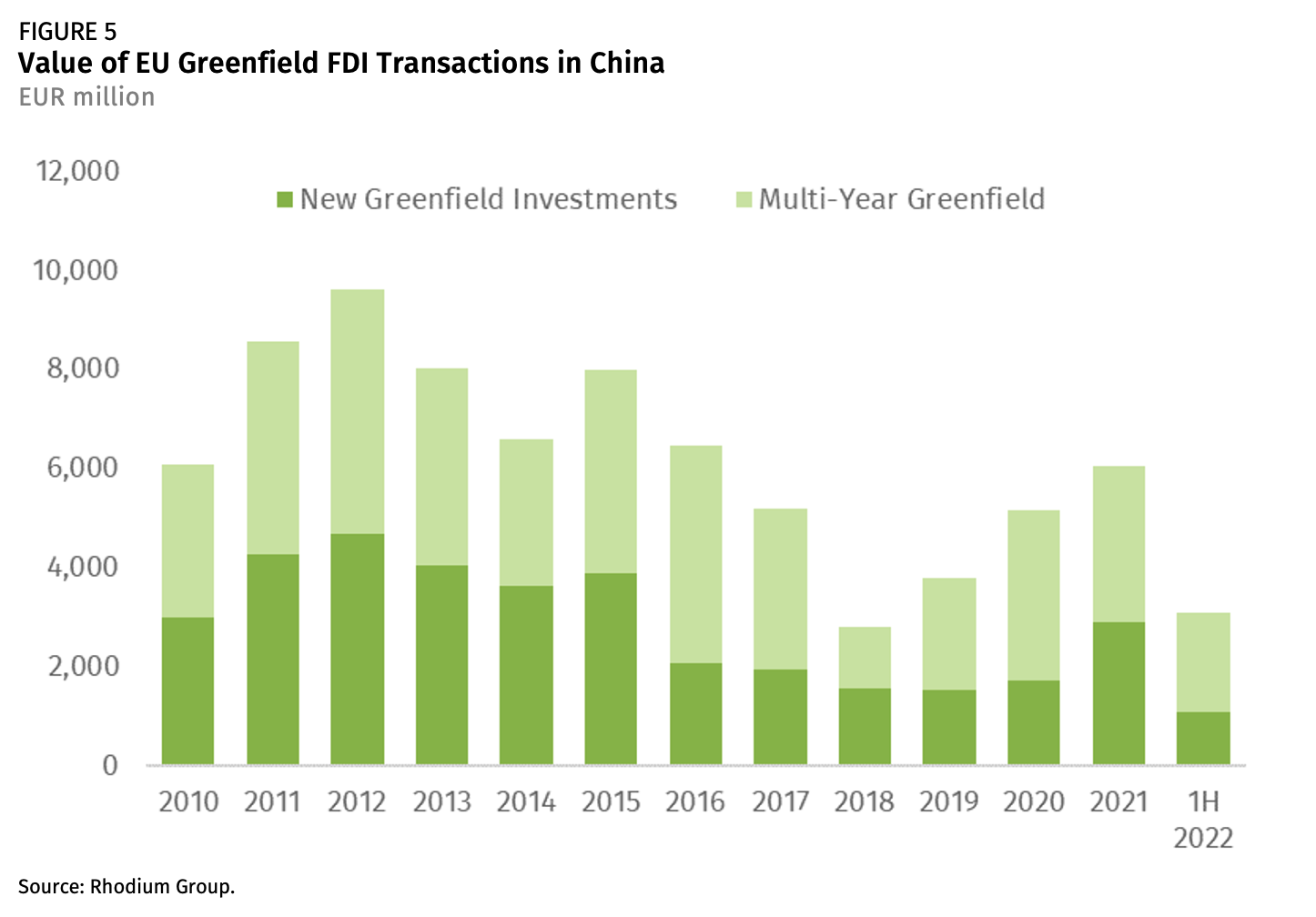 Firm-level surveys and media reporting show that foreign companies are reconsidering their China strategies in light of recent challenges, but that only a small portion is planning to significantly reduce their existing footprints. A flash survey of European investors released in May revealed that the number of companies considering shifting current or planned investments out of China to other markets had doubled, and a position paperfrom the European Chamber of Commerce in China, released in September, confirmed the worsening sentiment.

However, nearly 80% of respondents in the May survey had no concrete plans to shift investments. Companies with ongoing operations in China cannot unwind them so easily, and many continue to expand their existing footprint. In the second half of 2022 alone, Volkswagen announced investments of up to $3 billion in two new R&D-focused joint ventures; INEOS paid $1.5 billion for a 50% stake in Shanghai SECCO Petrochemical; and BMW announced that it plans to move the production of electric Minis from the UK to China.

The Outlook: Lower for Longer

Foreign direct investment in China in 2020-2021 was lower than rosy official data suggests if one controls for distortions from financial arbitrage and capital control circumvention. Alternative datasets suggest that “real economy” investments have, in fact, been declining since 2020, in line with slowing growth and global FDI patterns.

This slowing FDI trend fits into the picture of a China that is more inward-focused and less open to the international economic engagement that characterized the first three decades of reform. Even if one uses the inflated official Chinese statistics, China’s inward FDI stock has grown at a slower pace than its overall GDP, and the FDI intensity of China’s economy is far behind most OECD countries (for more on this comparison, see China Pathfinder).

At the same time, we are not (yet) seeing a mass exodus of foreign firms from China. Most large multinationals have taken steps to localize their China operations in recent years, so even the migration of expats and pandemic-driven isolation of China from the rest of the world has not triggered a run for the exits. The largest firms that have sunk billions of dollars into local assets are staying put and following through on their investment plans (for a perspective on the changing European investor mix, see our September 14th note, “The Chosen Few”).

In addition to the domestic headwinds, a diversification and resilience push are complicating the outlook. The supply chain problems created by China’s strict COVID-19 policies have led some multinationals to reassess the practice of offshoring manufacturing capacity. We are also seeing the first signs of diversification and “friend-shoring” in sectors that have attracted large amounts of FDI in the past (electric vehicles, clean technology components, semiconductors, etc.). The introduction of an outbound FDI screening regime in the US could cause further complications, especially if the idea gains traction with other governments. Barring meaningful policy reform in Beijing that rekindles foreign investor enthusiasm, these factors suggest that China may be heading for a prolonged period of lower direct investment inflows from abroad.