A price on carbon dioxide (CO2) and other greenhouse gas (GHG) emissions has long been a preferred instrument among economists and other academics for addressing the threat of climate change. The idea is simple: putting a price on carbon internalizes the societal costs caused by consumption of fossil fuels and other activities that emit GHGs. The concept sits firmly in the tradition of Pigouvian taxation, which has been applied to address other “externalities”—from the health system costs of tobacco and alcohol use to the environmental cost of substances that deplete Earth’s ozone layer. The concept of pricing carbon by way of a tax has been gaining traction among economists as an efficient, market-based strategy for reducing GHG emissions in the United States. More recently, the idea has garnered the attention of prominent Republicans and Democrats within and outside of Congress as well as advocates on the left and right poles of the national political spectrum.

Regardless of the motivation for pursuing a carbon tax, current and future discussions can benefit from an up-to-date and comprehensive assessment of what such a policy would mean for the US energy system and resulting GHG emissions in the future.

This paper is part of a series under the Columbia University Center on Global Energy Policy’s (CGEP’s) Carbon Tax Research Initiative. It provides projections of the US energy system and emissions implications of carbon taxes and associated policy choices using RHG-NEMS, which is a version of the National Energy Modeling System (NEMS) maintained by the Rhodium Group. NEMS is developed and used by the Energy Information Administration (EIA) to produce its Annual Energy Outlook and relied on by Congress to assess the impact of past energy and climate legislation.

This paper seeks to answer key questions about the impacts of a carbon tax in the United States. First, how responsive are different sectors of the US economy to a carbon tax at different tax rates? The answer has important policy implications, such as the amount of federal revenue collected under any given tax rate, the likelihood of achieving specified GHG reduction targets, and the potential role of other emission reducing policies. Second, what changes in energy prices, production, and consumption occur under different tax rates? These questions are addressed by assessing three carbon tax rate scenarios.

Based on this analysis, we make the following key findings: 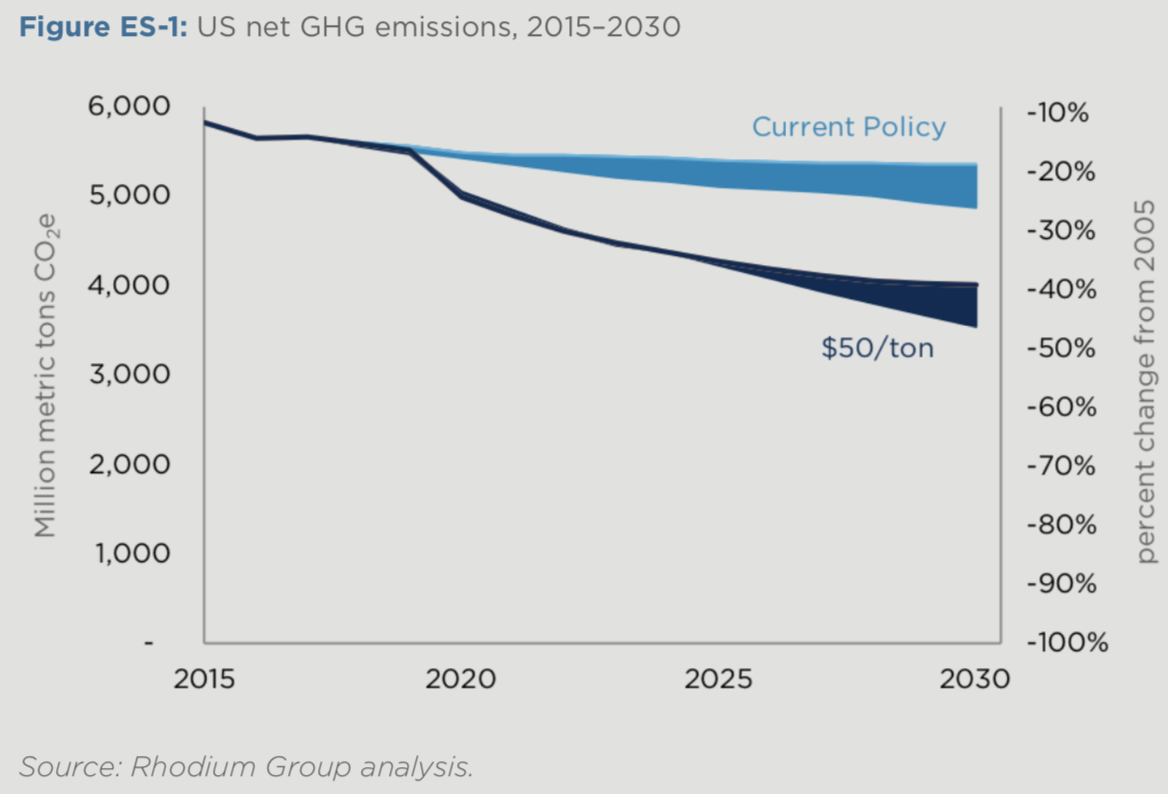 Other reports in this series are listed below.