Carbon capture is one of the only technologies that can allow fossil fuels to play a role in decarbonizing the electric power system. Fossil generators equipped with carbon capture can provide low-carbon flexible dispatchable power to complement variable renewable generation. In a previous note, we examined the opportunity for deployment of carbon capture retrofits in the industrial sector and here we now turn to the electric sector. In the US, carbon capture deployment in both the industrial and electric power sector can receive a tax credit for carbon oxide sequestration (section 45Q of the Internal Revenue Code), which is set to expire at the end of 2023. In this note, we review available capture technologies in the power sector and estimate deployment, emissions, and employment impacts of these technologies under three 45Q scenarios: current policy, a five-year extension, and a permanent extension. Under a permanent extension of 45Q, we find that as much as 52 gigawatts (GW) of new advanced natural gas capture plants deploy in our low cost technology case through 2050, providing 167 million metric tons of carbon capture capacity. This deployment primarily displaces conventional, uncontrolled natural gas generation, leading to a reduction of as much as 1.5 billion metric tons of CO2 emissions cumulatively by 2050. Construction and operations of these facilities could create up to 95,240 job-years through 2035.

Post-combustion capture[1] technologies process the flue gas from a coal or natural gas power plant after the fuel is burned to generate electricity. The CO2 is absorbed from the flue gas using chemical solvents like amines, generating a high-purity CO2 stream that can be exported from the facility for storage or use. Post-combustion capture is generally considered the most suitable option for retrofitting existing power plants, as its deployment requires the fewest modifications to an existing facility’s footprint. The two operational large-scale carbon capture projects in the power sector, Boundary Dam in Saskatchewan and Petra Nova in Texas, are both plant retrofits with post-combustion technology.

In pre-combustion gasification technologies, a fuel (generally coal) is decomposed into synthesis gas (syngas) through a gasification reaction. This syngas can then be further processed to increase the concentration of CO2 in the gas stream, allowing for easier CO2 capture via a chemical solvent. Once the CO2 is captured, the remaining components of the syngas (largely hydrogen) are used to drive a combustion turbine and generate electricity.

A third capture approach is the use of oxy-combustion. In this approach, natural gas (or gasified coal) is combusted in a mixture of oxygen and CO2. The resulting flue gas is a high-concentration CO2 stream (though the exact makeup of the gas depends on the initial fuel used). One variant of oxy-combustion technology, the basis of technologies like Allam cycle plants, uses a supercritical CO2 combustion turbine where this CO2 flue gas enters the working fluid loop; later, a portion of this CO2 working fluid can be removed at a lower temperature and exported from the facility. This advanced natural gas capture plant design presents several advantages relative to other capture technologies, notably higher plant efficiency and higher CO2 capture levels. These factors combine to make advanced natural gas capture plants an economically attractive capture option for new builds. The technology is still in the early stages, with a pilot plant that began operation in 2018 and plans for a 300 MW commercial plant by 2023.

We provided a summary of the 45Q tax credit in our industrial note, and the policy works the same way in the power sector. In short, 45Q provides a $50-per ton tax credit for CO2 that is captured and securely stored geologically or a $35-per-ton credit for captured CO2 that is used for specified purposes, including for enhanced oil recovery (EOR). A facility taking the utilization credit would also likely receive revenue from the sale of the captured CO2 to an EOR operator or other CO2 user. We use our Taking Stock 2020 projections for the price of a barrel of oil to estimate a per-ton CO2 price paid by EOR operators, which we layer on top of the $35 45Q credit. We do not assume an expansion of the EOR market; rather, we assume captured CO2 displaces CO2 from natural sources (the current dominant source for CO2 for EOR) in the market.

The 45Q tax credit is set to expire at the end of 2023. In this analysis, we consider three potential fates for the credit: expiration as scheduled, a five-year extension of the deadline through 2028, and a permanent extension of the credit. Given the inherent uncertainty around the cost and performance of new technologies, we consider a range of costs in our analysis. We bound these policy scenarios with two technology cost cases, representing low and high estimates of the costs of each capture technology. We run these inputs in RHG-NEMS, a version of the Energy Information Administration’s National Energy Modeling System modified by Rhodium Group to reflect our energy market and technology cost assumptions. This analysis uses Rhodium Group’s Taking Stock 2020 as a starting point, which reflects several post-COVID economic recovery pathways as well as existing state and federal policy on the books as of May 2020.

One key finding of our analysis is that the only carbon capture technology that deploys in the power sector is new, advanced natural gas capture plants. 45Q alone does not provide sufficient support to make the economics favorable enough for new builds with post-combustion or gasification capture technology or any retrofits on existing coal or natural gas plants. This is the case even with long-term 45Q support. As a result, we focus on advanced natural gas capture plants for the rest of this note.

We find that up to 5.4 GW of advanced natural gas capture plants deploy under current policy where 45Q expires at the end of 2023, but only if the technology costs are on the low end of our estimates (Figure 1, left axis). This is equivalent to just over 17 million metric tons of capture capacity (Figure 1, right axis). This deployment is front-loaded, with 5 GW of capacity coming online in 2026-2030 alone. Increasing revenues from sales of CO2 to EOR developers is sufficient to drive some additional capture capacity in the 2040s, even after 45Q expires. We see no deployment of plants with carbon capture in our high technology cost case. 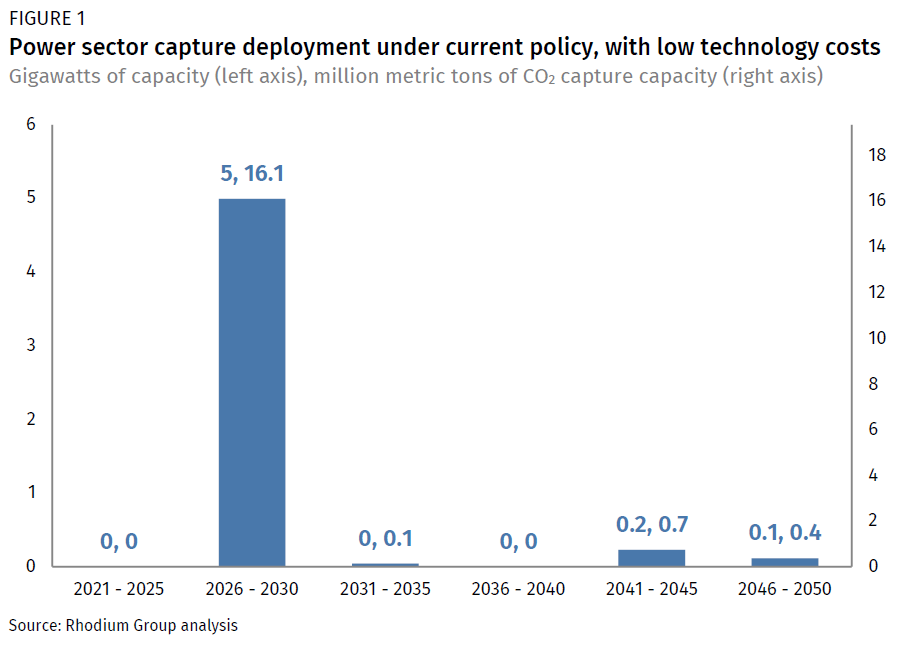 If the commence construction deadline under 45Q is pushed back five years through 2028, we find up to 17.4 GW of advanced natural gas capture plants would be built in our low technology cost case—more than triple the capacity we see built under current policy (Figure 2). Again, we see a combination of 45Q and EOR revenue driving substantial deployment in the near term, but modest additional deployment happens on the basis of EOR revenue alone in the out-years. As before, we find no deployment in our high technology cost case. 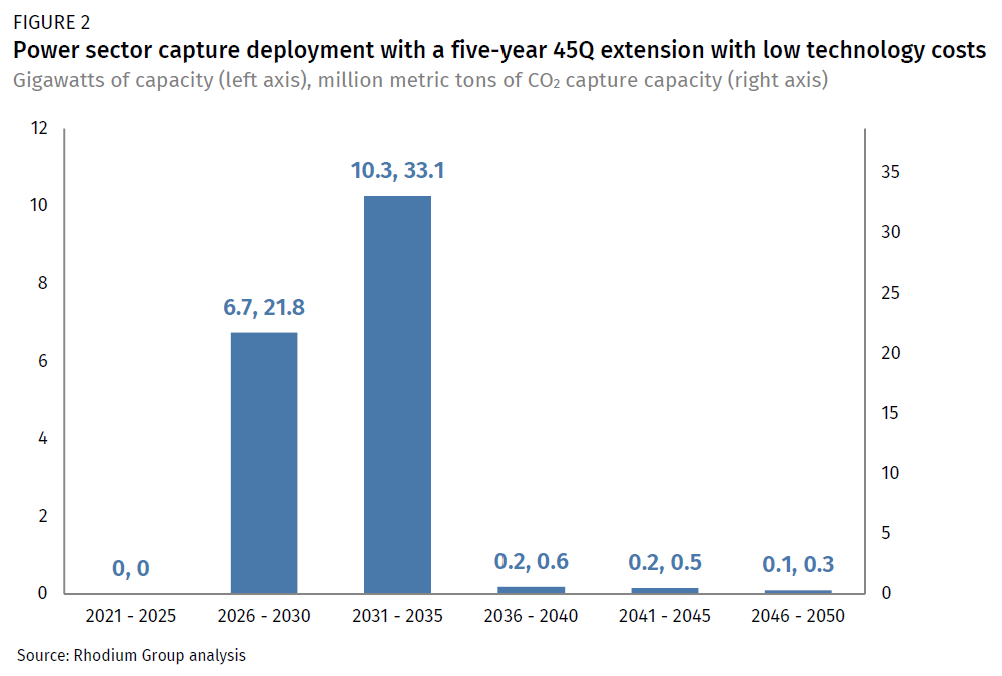 If the commence construction deadline is removed and 45Q is permanently extended, we find even more deployment in our low cost case: up to 52 GW of advanced natural gas capture plants, equivalent to about 167 million metric tons of capture capacity through 2050 (Figure 3). The economics of these new builds largely leads them to displace some of the new natural gas combined-cycle plants without carbon capture technologies that get built under current policy. We see fairly consistent growth of these plants through 2050. This flows through to power generation as well, and by 2050 we see advanced natural gas capture plants providing about 5% of total electric generation in this policy scenario and cost case. 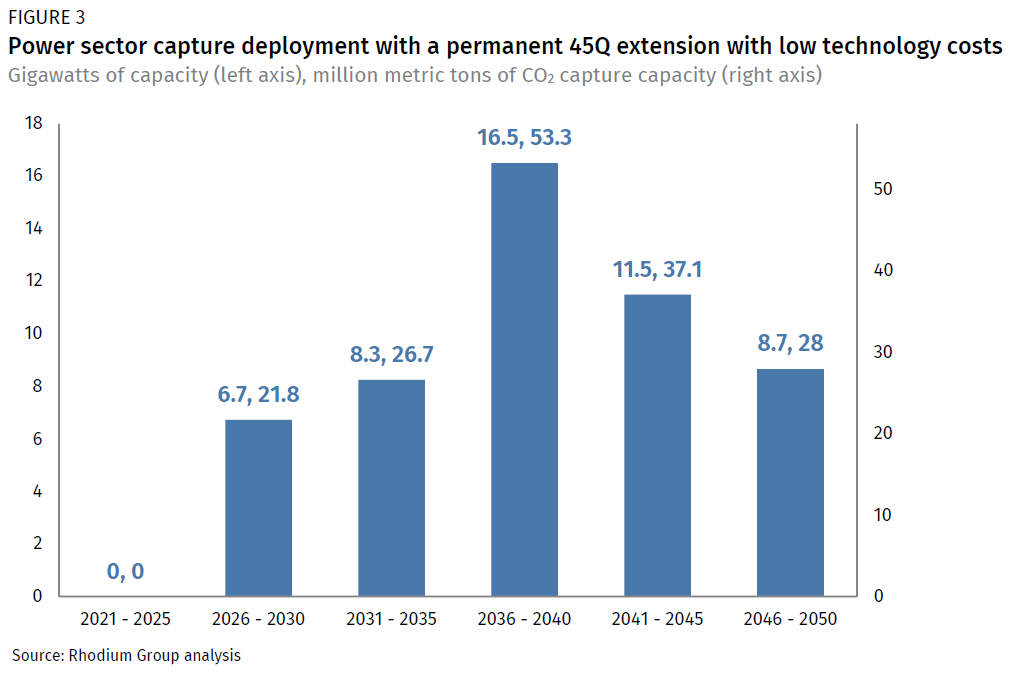 Deployment of new advanced natural gas capture plants in our low technology cost cases results in lower CO2 emissions in the power sector overall. Current 45Q policy drives a cumulative reduction of 425 million metric tons of CO2 from the power sector through 2050, while a full extension drives a reduction of 1,463 million metric tons (Figure 4). The main factor contributing to this decline is the displacement of uncontrolled natural gas generation with this new gas capacity with carbon capture, as discussed above. Under a full extension, we find that deployment of new advanced natural gas capture plants does not significantly displace the deployment of other clean energy generating technologies like wind, solar, or nuclear. 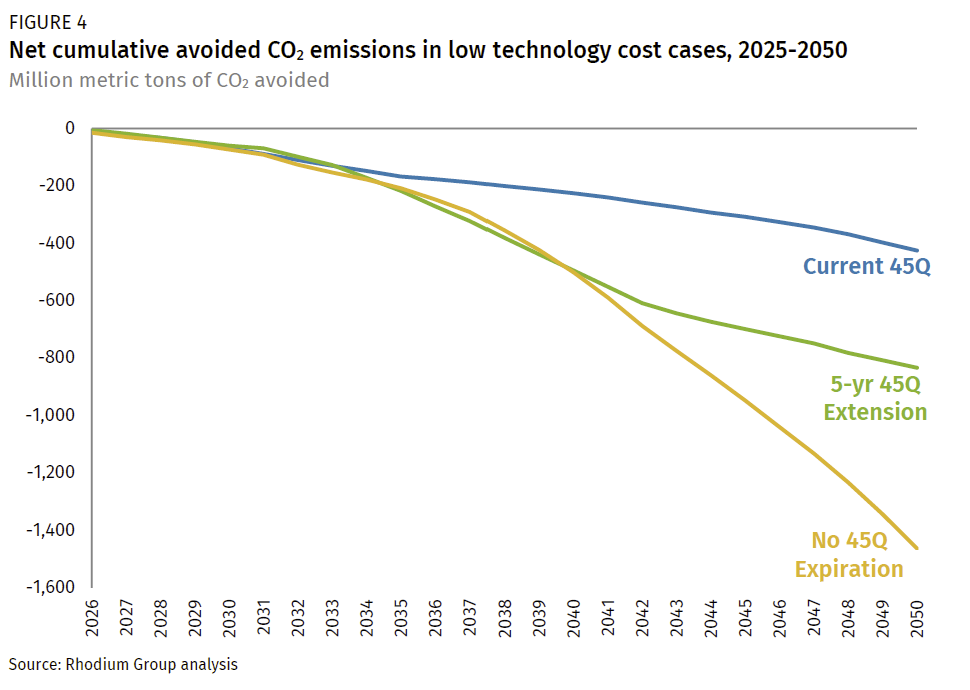 There are employment opportunities associated with the build-out of advanced natural gas capture plants. To conduct our jobs analysis, we used the economic model IMPLAN to explore job creation resulting from the construction and operation of these facilities. Under a permanent 45Q extension with low technology costs, advanced natural gas capture deployment creates a total of 95,240 job-years through 2035 (Figure 5).[2] The majority of these are project jobs resulting from the capital investment needed to design and construct these new facilities, while the remaining job-years are operations jobs needed to run these facilities through 2035.

Power sector carbon capture: a potential tool in the toolbox

The 45Q tax credit is also not a substitute for a broader decarbonization policy in the electric sector or across the economy. If carbon capture secures 5% of total electric generation market-share by 2050, our highest estimate, and no other action is taken, the power sector will be nowhere near deep decarbonization (Figure 6). At the same time, the 45Q credit does have the potential to get some carbon capture projects going, and that’s a critical first step in expanding the solution set for tackling climate change. 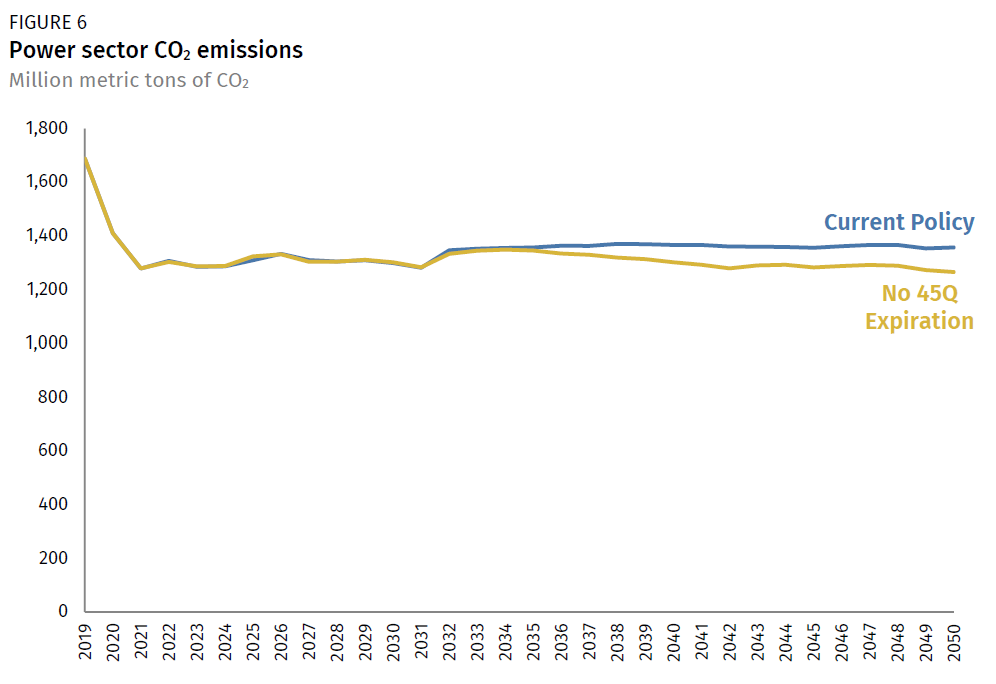 [1] Throughout this note, we use capture as shorthand for carbon capture.

[2] A job-year is the equivalent of one full-time job for the duration of one year.