California declared a state of emergency on Sunday in response to multiple wildfires. Amid this crisis, state electric utilities are struggling to prevent more fires caused by strong winds and sparks from transmission equipment. To do so, they are preventatively shutting off power to hundreds of thousands of customers. In this note, we look at how wildfire prevention outages stack up compared to other historic electricity outages, starting with Pacific Gas and Electric’s (PG&E) two largest Public Safety Power Shutoffs (PSPS) this month. The larger of the two events started this Sunday, effecting over 950,000 customers, many of which still do not have power restored. We looked at the past ten years of outage data to see just how significant these Northern California outages are in the context of power cuts caused by extreme weather and general utility operations. We find that recent PSPS outages don’t come close to making the list of top outages nationally, all of which are caused directly by extreme weather. However, when we exclude outages caused by extreme weather, we find that nationwide, the current outage is the third-largest operational utility outage over the past 10 years. And it’s not over yet—more counties are losing power this morning. We will continue to track this and other planned outages as California’s wildfire season progresses.

In California, electric utilities have the authority to shut off power in order to protect public health—including to prevent fires caused by the interaction of grid equipment with strong winds. While losing power is minor compared to the alternative of losing life and property, controversy has erupted over the scope and scale of PG&E’s PSPS and response to weather conditions. The moves ignited media attention and speculation about more effective ways to prevent wildfires, and drew into question whether the ends justify the means. California’s Governor demanded that PG&E compensate customers for the PSPS, claiming it was implemented “with astounding neglect and lack of preparation.” The president of the California Public Utilities Commission (CPUC) questioned the magnitude of the PSPS, stating “the scope, scale, complexity, and overall impact to people’s lives, businesses, and the economy of this action cannot be understated.” PG&E continues to be in the hot seat, as state officials and policymakers debate strategies to prevent catastrophic wildfires and the role of PSPS. At a minimum, PG&E will continue to face scrutiny as California heads into what is becoming a year-round fire season.

To understand how the recent PG&E events stack up, we compare the blackouts caused by the two October PSPS to losses incurred during major outages in the recent past. Approximately 52 million[1] customer-hours have been lost to date in the current PSPS, which began October 26, and roughly 34 million customer-hours were lost during the October 9-12 PSPS. Power cuts out for different reasons. Weather events and other natural disasters tend to cause the longest and most wide-spread blackouts. For this reason, the first PG&E PSPS pales in comparison to the top national outages over the past decade, all of which were caused by extreme weather (Figure 1). Most of the top national blackouts over the past decade were 10 to 20 times larger than either PSPS. On this list, Hurricane Maria, which caused America’s largest blackout, was over 50 times larger than these wildfire prevention outages. And while the latest PSPS is ongoing, it’s not expected to come close to matching these heavy hitters. 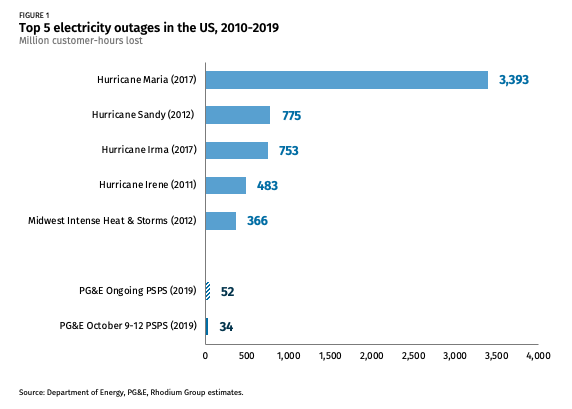 In addition to extreme weather and natural disasters, outages occur because utilities shut off power for operational reasons. These include to repair infrastructure, to respond to equipment malfunction, or as a preventative measure to avoid wildfires and other public safety risks. In this category of outages, the PSPS that began Sunday is already the third-largest operational outage in the last decade, with the October 9-12 PSPS next in line (Figure 2). They trail a major cascading blackout in 2011 that brought the entire San Diego-Tijuana metropolitan area to a standstill, and an island-wide outage in Puerto Rico set off by a fire at a power plant in 2016. 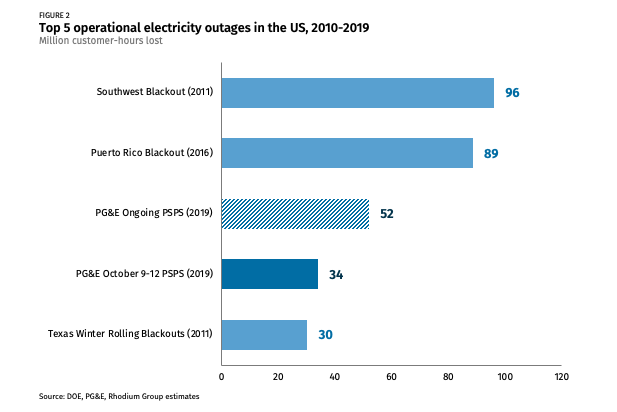 PSPS Is the New Black

As California continues to experience the increased impacts of climate change—extended fire seasons, increased drought, and extreme weather—PSPS events are likely to become the new normal. The ongoing outage will not fully be restored before more outages start this morning. Depending on weather conditions and PG&E’s re-energization rate, we estimate that the current PSPS outage could grow significantly. As the threat of PSPS increases, California faces tough decisions regarding the cost and consequence of various approaches to mitigating the risk of catastrophic wildfires. At a minimum, Smokey the Bear might need to have words with PG&E. Despite the multiple PSPS events, the company is still struggling to prevent wildfires sparked by their equipment. Multiple reports in the last week connect the dots between PG&E’s equipment and the blazes, including involvement in the Kincaid fire. As fire season unfolds, Rhodium will continue to track PSPS events and put their magnitude in context. Unfortunately, this is likely to keep us very busy.