Preliminary US Emissions Estimates for 2019

After a sharp uptick in 2018, we estimate that US greenhouse gas (GHG) emissions fell by 2.1% last year based on preliminary energy and economic data. This decline was due almost entirely to a drop in coal consumption. Coal-fired power generation fell by a record 18% year-on-year to its lowest level since 1975. An increase in natural gas generation offset some of the climate gains from this coal decline, but overall power sector emissions still decreased by almost 10%. Unfortunately, far less progress was made in other sectors of the economy. Transportation emissions remained relatively flat. Emissions from buildings, industry and other parts of the economy rose, though less than in 2018. All told, net US GHG emissions ended 2019 slightly higher than at the end of 2016. At roughly 12% below 2005 levels, the US is at risk of missing its Copenhagen Accord target of a 17% reduction by the end of 2020, and is still a long way off from the 26-28% reduction by 2025 pledged under the Paris Agreement.

The switch from coal to natural gas and renewables in the electric power sector accounts for the majority of the progress the US has made in reducing emissions over the past decade. This was particularly true last year. Based on a combination of monthly data from the Energy Information Administration and daily data from Genscape, we estimate that coal-fired power generation fell by 18% in 2019 (Figure 1). That’s the largest year-on-year decline in recorded history with coal generation now at its lowest level since 1975. It also marks the end of a decade in which total US coal generation was cut in half. 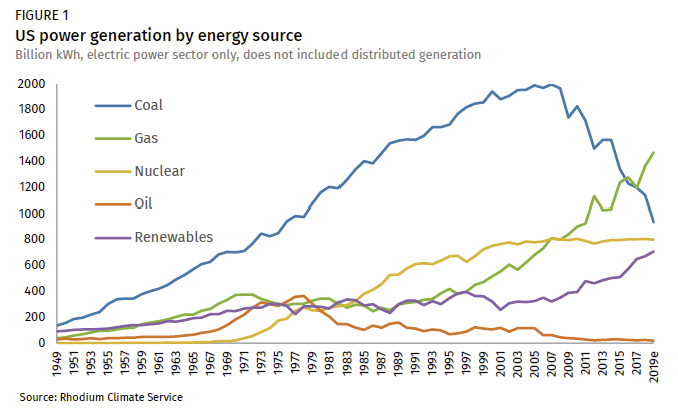 Natural gas generation made up much of the gap last year, as it has consistently in recent years, thanks to extremely cheap gas prices. Average annual prices at Henry Hub were down 20% in 2019, adjusted for inflation, to their lowest level in decades. Renewables played an important role as well thanks in part to continued cost declines in both wind and solar generation. Based on preliminary data from EIA and Genscape, utility-scale renewable generation (including hydro) was up 6% in 2019. That’s higher than the 3% gain in 2018, but lower than the 13% gains posted in 2016 and 2017.

Unfortunately, there was little good news outside the power sector, continuing a trend we have observed for the past several years. Based on preliminary data, we estimate that transportation emissions declined slightly—by 0.3% year-on-year (Figure 2). Industrial emissions (both energy and process) rose by 0.6%. Direct emissions from buildings increased by 2.2% and emissions from other sectors (agriculture, waste, land use, oil and gas methane, etc) rose by 4.4%. 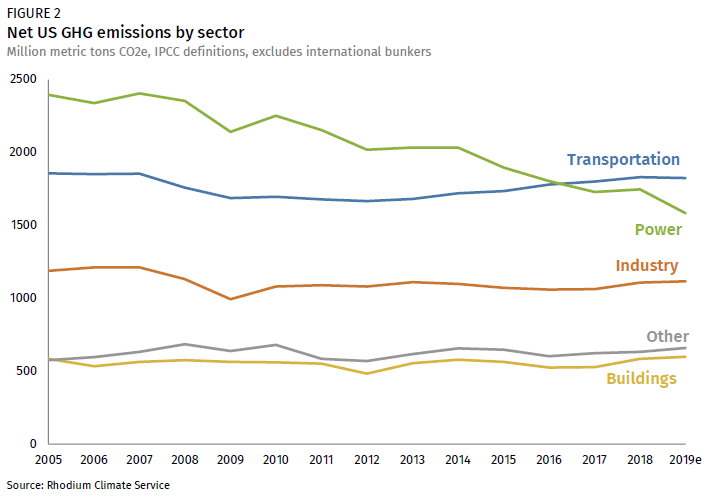 This was an improvement from the relatively sharp increase in building, transportation and industrial emissions recorded last year (Figure 3). As noted in our analysis last year, most of the increase in building emissions and some of the increase in industrial emissions in 2018 were weather-related. 2017 had been an atypically warm year and 2018 was colder (and closer to the ten-year average). This boosted year-on-year demand for heating in homes, offices, stores and factories. 2019 had about as many heating degree days (HDDs) as 2018, so there wasn’t the same year-on-year spike.

Beyond the year-to-year fluctuations in weather and economic growth, it’s clear that US decarbonization success is still largely limited to the 27% of net emissions that come from the power sector. Improvements in vehicle, lighting, and appliance efficiency have been successful in slowing the pace of emissions growth in transportation and buildings (and perhaps even halting it in transportation), but it will require much more than efficiency to achieve meaningful absolute declines. Large-scale fuel substitution (to decarbonized electricity and other zero-carbon fuels) will be required. States have some ability to drive this in absence of federal policy action.

The industrial, agriculture, and waste sectors remain largely untouched, either by policy or technology innovation. Industry is now a larger source of emissions than coal-fired power generation, and growing. There are low-cost technology solutions to reduce oil and gas methane emissions, but their deployment at scale requires strengthening regulations that the Trump Administration instead has been weakening. Reducing HFC emissions also requires new policy action. 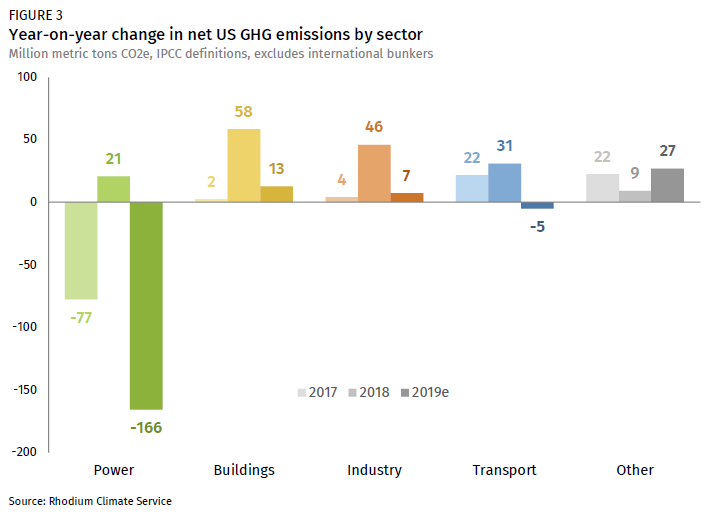 Coming up Short on Climate Targets

Using preliminary data and IPCC accounting protocols, we estimate that net economy-wide GHG emissions fell by 2.1% in the US in 2019 to 5,783 million metric tons. That’s a 12.3% cumulative decline relative to 2005 levels, with one year to go to meet the Copenhagen Accord target of reducing emissions “in the range” of 17% below 2005 levels by 2020, and six years to go to reach the 26-28% reduction by 2025 pledged under the Paris Agreement (Figure 4). The fact that the US has achieved no net reductions over the past three years makes meeting these targets extremely challenging.

If our preliminary emissions estimates prove correct, hitting the Copenhagen Accord’s 17% target exactly will require a 5.3% reduction in net GHG emissions this year—a bigger annual drop than the US has experienced during the post-war period, with the exception of 2009 due to the Great Recession. Meeting the Paris Agreement targets requires a 2.8-3.2% average annual reduction in emissions over the next six years. This is significantly faster than the 0.9% average annual reduction achieved since 2005. It’s still possible, but will require a significant change in federal policy—and pretty soon. 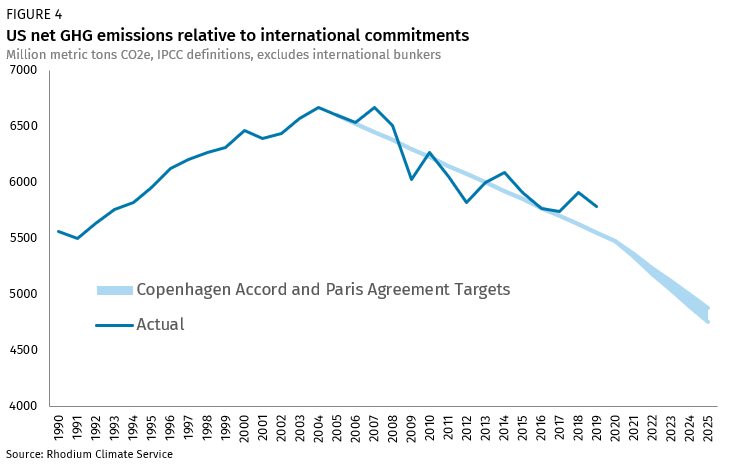 Related Work: 2018 US Emissions Estimates
Share Research
Back to Top