The Footprint of US Carbon Pricing Plans

Earlier this month the Center for Strategic and International Studies hosted an event on the state of carbon pricing around the globe. Representatives from the International Finance Corporation and the Niskanen Center weighed in on the prospects of global and federal action on carbon pricing respectively. This note summarizes Rhodium Group’s contribution to that discussion focusing on the current landscape at the state level in the US. We find that while carbon pricing is gaining new momentum within a growing number of states, prices apply to only a fraction of total greenhouse gas (GHG) emissions and prices are relatively low.

Putting a price on carbon is widely considered a key component of a robust response to the challenge of climate change. There are two dimensions to this market-based approach. First is identifying which GHG emissions get a price. Second is identifying the appropriate price. Combined these two factors provide a critical lens for assessing ambition in US state and regional climate mitigation policies in the absence of federal action.

The map of states with carbon prices in place hasn’t changed much in the past five years. California’s economy-wide cap-and-trade system and the Regional Greenhouse Gas Initiative (RGGI) in the Northeast remain the only two active carbon pricing programs in the US. Still, we’ve seen this tool gain some traction on the subnational level over the past year, in the wake of the federal government’s withdrawal from any serious climate policy discussion.

On the East Coast, RGGI is on track for expansion. Virginia has begun the process of joining the program, and New Jersey has pledged to return. Once these two additions are complete in 2020, we find the footprint of the power sector carbon market grows by nearly 70 percent based on our 2015 GHG emissions data. RGGI will cover sources responsible for 117 million metric tons of carbon dioxide (CO2) emissions, an increase from the 70 million metric tons covered by RGGI’s current nine member states. Meanwhile, on the opposite coast, Oregon and Washington came as close as they ever have to adopting carbon pricing policies. Beyond the Pacific Northwest, legislatures in nine additional states from Hawaii to New Mexico to Vermont considered carbon tax bills in the last year though none were adopted.

Where does this leave carbon pricing in the US? Looking at the programs in isolation, we find 75% of California’s GHG emissions (including emissions from imported electricity) are subject to a carbon price (Figure 1). Meanwhile, RGGI states currently price 15% of total emissions. With New Jersey and Virginia that number rises to 17%. The difference between California and RGGI lies in the fact that RGGI only caps emissions from electric power while California goes beyond that to cover emissions from buildings, transportation, and industry. Looking at the combined impact of these US programs, 6% of national emissions are currently subject to a carbon price (Figure 2). RGGI expansion would increase coverage to 7%. 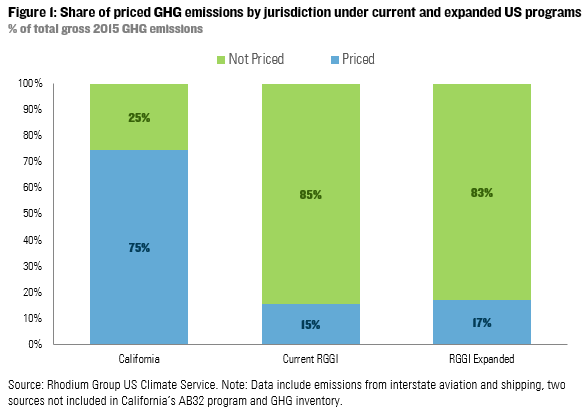 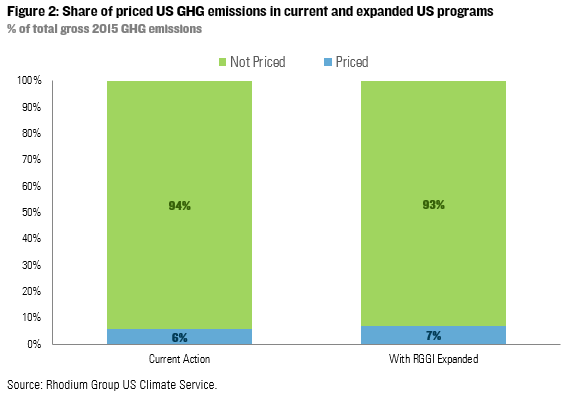 Looking at carbon prices, we see a clear divide between California and RGGI. Currently, RGGI prices are $3 per metric ton of CO2. In California, a ton of CO2 costs 3.5 times more at a rate of $15 per metric ton (Figure 3). These prices are far lower than the central estimate of the social cost of carbon: approximately $50 per metric ton. They also coincide with the minimum allowance prices permitted in each jurisdiction. RGGI’s minimum price has hovered around $3 per metric ton while in California currently sets its minimum at $14.53 per metric ton. Without these minimums serving as a price floor, actual carbon prices would likely be even lower. Complementary policies and market trends, such as cheap renewable power and abundant natural gas, have been bigger drivers of emission reductions. 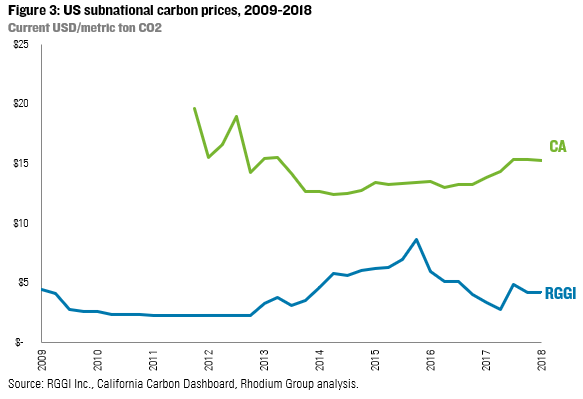 Where are prices likely to go in the future? As we have said before, RGGI carbon prices will likely remain low. Recent program revisions have tightened the carbon cap through 2030. However, these adjustments probably will not be enough to further decrease emissions more than what will happen anyway (Figure 4). Two wild cards will be the level of ambition leaders in New Jersey and Virginia show as they set their carbon caps. California has put minimum allowance prices on track to rise by 5% annually, in real terms. This policy will result in a floor of approximately $26 per metric ton in 2030. Meanwhile, California regulators see their cap-and-trade program playing a larger role in driving emissions reductions in the 2020s as they seek to slash the state’s emissions by 40% below current levels. California carbon prices could break from historical experience, exceeding the minimum price over time. This ambitious climate goal also means that the gap between RGGI’s carbon price and California’s carbon price will probably widen in the future, absent new subnational or federal action on climate change.

A Bigger Footprint for Carbon Pricing

There are three ways to usher in more carbon pricing as part of the US response to climate change. More states could choose to price carbon. Just like New Jersey and Virginia, states can move to regulate GHGs from some portion of their respective economies. States already participating in carbon markets could expand their programs. Many RGGI states are actively exploring pricing carbon beyond the electric power sector through the Transportation and Climate Initiative. These and other opportunities could arise to expand carbon pricing efforts. Finally, the Federal government could act. While that step is a longshot these days, a comprehensive, economy-wide carbon tax or cap-and-trade program at the federal level would take carbon pricing into the mainstream nationwide. We will continue to track this space for possible movement on all three of these fronts.

Explore our Energy & Climate work
Share Research
Back to Top