The World Bank and International Monetary Fund (IMF) hold their annual meetings this week in Washington, and the outlook for emerging economies is obviously an important theme.  So this is just a brief note to point out that Tuesday the IMF released its fall World Economic Outlook (WEO) update.

Catching up with developments since its last report, it cut the global outlook and its predictions for China too.  The Fund’s China projecting was lowered to 7.6% for this year, down from 7.8% previously. In its early April WEO this year it had looked for 8.0% for 2013. 2014 projections went from 8.2% in April to 7.7% in the July update to – now — 7.3%, and the reason cited was Chinese policymakers’ reduced willingness to stimulate the economy to put off needed adjustment.

The Fund’s GDP outlook is important for a couple reasons.  For one, the Fund has a pretty good sense of what the mood is among China’s chief financial authorities and planners.  For another, the GDP outlook is connected to expectations for China current account balance – which is important both for its own sake and because it’s a political lightning rod in Washington. In this week’s update the Fund revised down China’s current account balance/GDP ratio for 2013 from 2.6% to 2.5%, and for 2014 from 2.9% to 2.7%.  The argument was that weakening growth in China would weaken prices for Asian shipments to China and thereby impair the ability of those countries to consume Chinese exports. Our analysis shows that China’s long-standing deficit with the rest of Asia (more than offset by its surplus with the rest of the world – which is where those Asian imports of China’s wind up) has reversed since September 2012, and China has since run a significant trade surplus against its regional neighbors (Figure 1). 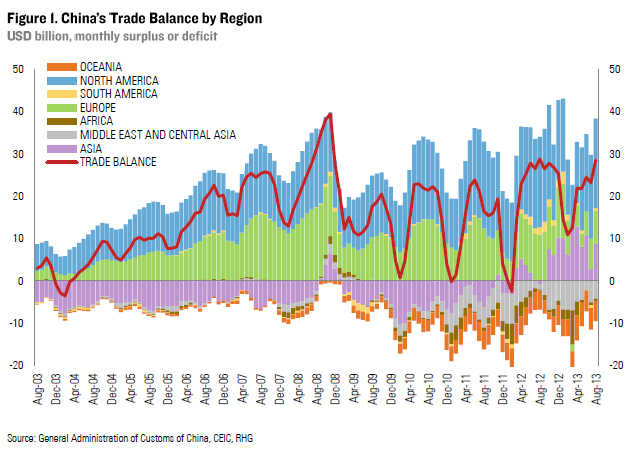 We think this altered trade pattern is contributing to shifting geo-political dynamics in Asia to a greater degree than people realize.  But the concrete reality of China’s current account balance moderating further – despite the domestic Chinese weakness which should normally push up China’s exports – seems to be reflected in the IMF’s figures.

China’s Deputy Central Bank Governor Yi Gang – who oversees the country’s enormous foreign reserve holdings – and Vice Finance Minister Zhu Guangyao will attend the IMF/World Bank meetings, and likely they will be asked to comment on these projections. But surely, rather than answer those questions Yi and Zhu will focus on reiterating their calls for the U.S. to “earnestly take steps” to resolve its debt issues and guarantee the safety of China’s sovereign investment in the US. One could quip that if China’s current account surplus – especially with the US – continues to fall, then it should be extension mean it’s easier for the US to reduce its debt!