China’s Belt and Road: Down but not Out

Recent Boston University (BU) research showing a sharp drop in Chinese overseas policy bank lending has fueled speculation that China’s Belt and Road Initiative (BRI) may be fading away. The slowdown in BRI activity is real: in previous research, we showed that China’s outbound lending has been in decline since 2016 (see Booster or Brake). Beyond the BU numbers, weak economic conditions and debt pressure in several recipient states suggests that lending will have slowed to new lows in 2020. However, we suspect the 2019 slowdown was not as dramatic as the BU numbers indicate. And the numbers do not reflect the changes underway in China’s ambitious initiative.

Our Take on the BU data

The newly released dataset from Boston University shows a dramatic drop in China’s outbound loans after 2016, with new lending commitments from China’s two main policy banks, China Development Bank and the Export-Import Bank of China (China EXIM), falling to USD 3.9 billion in 2019.[1] This would be a drop of around 94 percent from the estimated peak of USD 75 billion in 2016. These numbers have created controversy, with several critics questioning the size of the drop, the completeness of the dataset, and the accuracy of specific country data.[2]

Our own analysis of the BU dataset supports this criticism—in part. The BU authors make structural and methodological choices that may leave observers with a distorted view of China’s outbound lending and exaggerate the drop in China’s loans. First, the BU dataset excludes loans from China’s commercial banks, which are increasingly active players in China’s cross-border finance. [3] The BU team is clear about this decision, arguing that because policy banks work as “first movers” to unlock later commercial participation, they are the most important lenders to governments and SOEs.[4]Accordingly, they say their data is intended only to describe China’s lending to governments, not to serve as a “sole barometer” for the broader BRI.[5]

We agree that CDB and China EXIM are still China’s key players in overseas infrastructure. However, our own research suggests China’s outbound commercial banks have become increasingly important emerging market lenders, whether to governments, SOEs or private firms. The gap between BU coverage and total lending could be significant in middle-income states like South Africa, where Chinese banking activity has developed beyond government-to-government infrastructure loans. BU finds only USD 2.5 billion in loan commitments to South Africa from 2008 to 2019, but work by Zhou and Cerutti (2018), using BIS data to estimate cross-border lending from all Chinese banks, shows Chinese claims on South African entities of USD 6.4 billion in mid-2016. Much of this was commercial non-infrastructure finance.[6] The issue ultimately is one of scope. The BU focus on policy bank loans obscures changes in China’s lending patterns—whether a shift in the source of loans to emerging market governments from policy commercial banks, or shifts in the destination of loans from governments to private infrastructure vehicles and corporates.[7] These have been important developments in the evolution of the BRI, and even partial inclusion of commercial bank loans to governments would offer a more complete picture of sovereign lending.

Beyond the decision to filter out commercial bank loans, there are structural reasons to believe the BU dataset may underestimate China’s overseas lending activity in 2019. To their credit, the BU authors utilize a strict methodology whereby a loan commitment must be corroborated by both Chinese and host-country sources in order to be included. Yet for more recent lending cases (2018/2019), corroborating information may not be available—even as of late 2020. It is common for information to be publicly disclosed only years after an initial loan commitment, in subsequent reports, government audits or budget documents, by other researchers and databases, or after projects have already been constructed. Other researchers have tended to report numbers only after a multi-year lag, avoiding the minefield of partial data. [8]

However narrow, the BU data still illustrates a clear trend: China’s overseas infrastructure lending has declined over the past four years. Indeed, several region-specific datasets (including two used as reference datasets by the BU team) showed declines as early as 2017. Estimates from the China-Latin America Finance Database (CLAF) show that in 2017, Chinese lending to Latin America was already down by 82% compared to a high in 2010.[9] SAIS-CARI’s database shows similar trends with 2018 lending levels at about 30% of 2016 peak levels.[10] Finally, Lowy’s Pacific Aid Map database showed 2018 loan commitments at USD 421 million, compared to over USD 1 billion in 2017.[11] Asia lacks a reliable region-specific dataset for Chinese loans but as we discuss below, similar dynamics are likely at play. 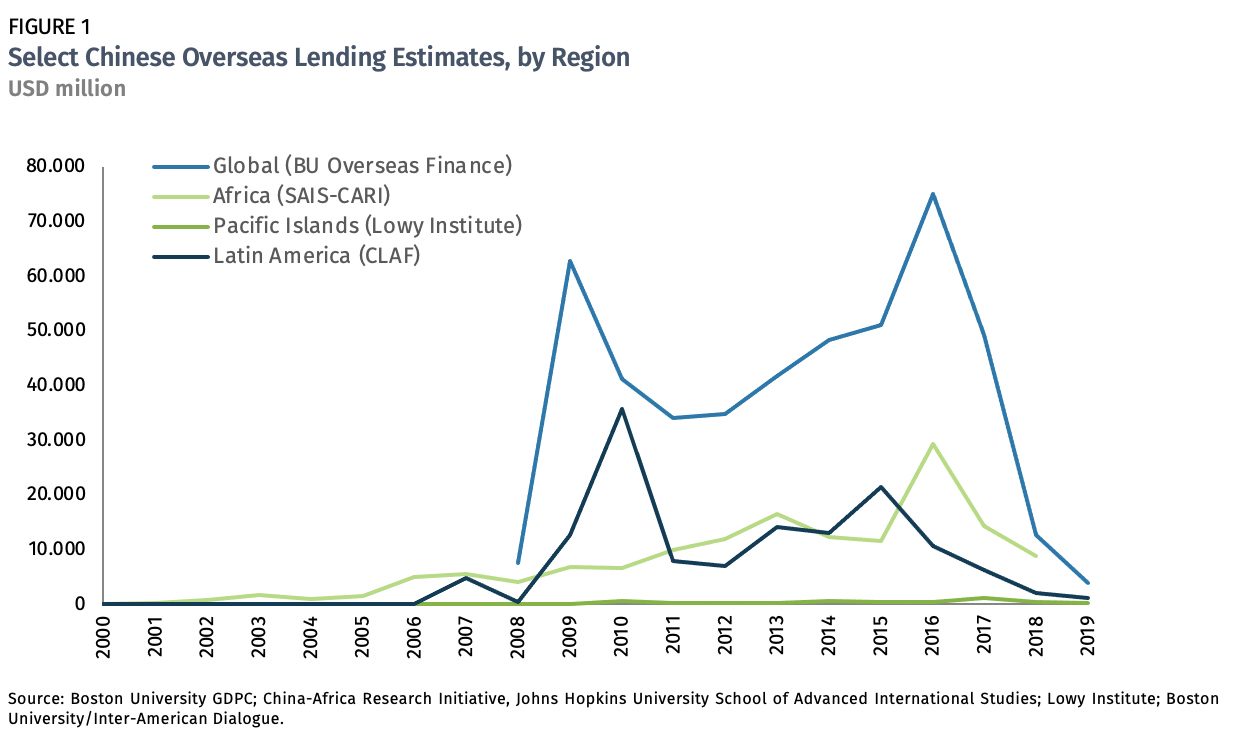 Proxy data such as outbound construction contracts tracked by China’s Ministry of Commerce (MOFCOM) also show a change in pattern after 2017.[12] It is notable that while contracts declined in 2018, contract value has held up: based on past trends, we expect late 2020 contract value numbers to be high, bringing the total yearly figure to at least USD 200 billion or close to 2015 levels. 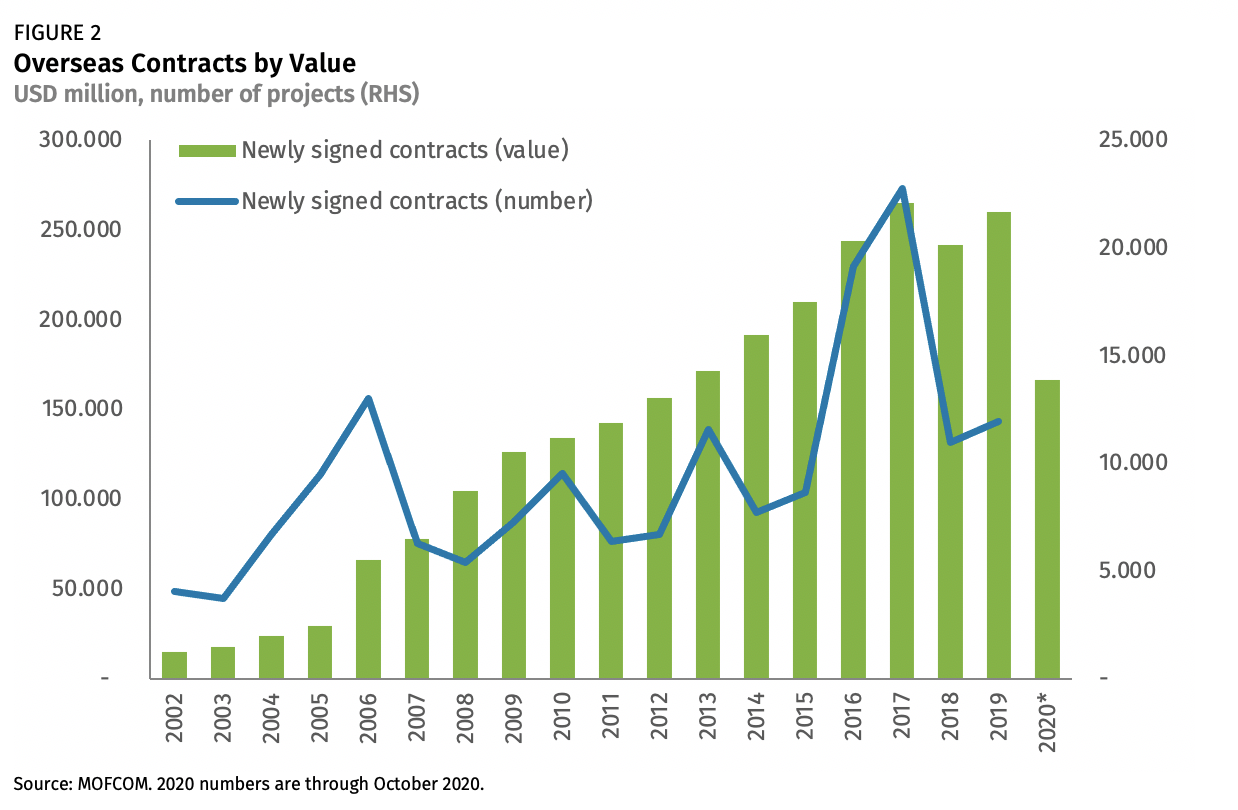 This slowdown is not surprising given the headwinds facing China’s outbound lenders since 2016-17. First, China’s big banks are re-evaluating their lending practices after high-profile stumbles with Venezuela, Pakistan, Sri Lanka, and other major borrowers. This has been accompanied by an increase in debt renegotiations. In our recent “Seeking Relief” note, we showed that as much as a quarter of China’s overseas lending has run into trouble, surely enough to trigger a major rethink of overseas lending activity. Second, increased deleveraging pressure in China has affected Chinese banks’ ability and willingness to make major new loans, especially in high-risk settings. Third and just as crucial, some recipient countries have started pushing back against China’s BRI lending. The Hambantota Port case in Sri Lanka put alleged Chinese “debt trap” diplomacy in the spotlight. In addition, high costs, corruption allegations, and implementation issues have increased resistance in recipient countries. Malaysia, Myanmar, and Russia are among the growing number of countries that have re-evaluated infrastructure plans and canceled or renegotiated new projects. Accordingly, China’s second Belt and Road Forum in 2019 directed China’s financiers to focus on lending to fewer, more sustainable projects.

From our point of view, 2020 (rather than 2019) is likely to be the more crucial turning point for Belt and Road and China’s outbound lending. Data on China’s overseas lending in 2020 will not be available until next year for DSSI-eligible countries, and regional databases are several years from estimating 2020 flows. Yet we expect to see a drastic fall in China’s global infrastructure lending in 2020, as both China and recipient countries marshalled resources for COVID-19 and sought to alleviate debt pressure by renegotiating existing loans. Project planning and implementation have stalled due to travel restrictions and economic disruption, and both Beijing and recipient countries have been forced to re-evaluate high profile infrastructure plans.

Meanwhile, the high number of negotiations suggests China’s banks have been focused on crisis management and outstanding loans rather than new credits, and though lending to China’s biggest borrowers (including Angola and Pakistan, both facing debt pressure) has not fully stopped, it is likely to hit new lows.

Beyond 2020, overseas lending by China’s policy banks will continue to slow, due to the lasting effects of the COVID-19 pandemic and new prudence from CDB and China EXIM. Regulatory tightening in China and the need for CDB to bankroll domestic stimulus (during turmoil in China’s domestic credit market) all point to a shift in dynamics in the long term.

However, while the BRI has been a loan-focused project to date, 2020 may highlight the vital (and growing) role of other forms of interactions. Key among those is Chinese greenfield investment, whether for infrastructure or other sectors, which held up much better in 2020 than other forms of Chinese cross-border capital flows. In 2020 we could also see China’s Big Four banks and even SOEs playing a bigger role in China’s overseas lending mix—a trend we have observed over the past decade. In short, the BRI of the future may not be the policy-loan-financed infrastructure program of years past—but it is far from dead.

[2] One example comes from Tristan Kenderdine and Niva Yau, which prompted a rebuttal from Kevin Gallagher of the BU team on Twitter.

[3] The BU authors choose to exclude mixed finance involving commercial banks, even when CDB or China EXIM are co-financers, and even when those projects appear in their primary reference datasets. The dataset therefore excludes major loans, such as those for the Caculo Cabaca hydro project in Angola (USD 4.1 billion) and the Kafue Gorge dam in Zambia (USD 1.5 billion), both of which are present in verified SAIS-CARI data.

[4] The BU authors cite Chin and Gallagher (2019) as theoretical background.

[7] In their blog post, Gallagher and Ray suggest that other datasets on commercial finance fill this gap, linking to AEI’s China Global Investment Tracker. This does not cover commercial banking loans, only FDI and reported construction contracts. We are not aware of any global dataset that fully covers commercial bank loans.

[8] We take a few more issues with the BU dataset. Though we believe 2019 commitments (whether solely from policy banks or from both policy banks and commercial banks) were likely higher than the BU data depicts, we believe the overall loan volume from 2008 to 2019 (estimated at USD 462 billion) was likely lower than BU authors depict. One factor is that BU authors appear to include several non-binding “cooperation agreements” or MoUs—which typically exaggerate pledged financing—as confirmed loan commitments. Their estimate for 2016 features several possible cases, including a reported USD 15-billion-dollar loan to Iran from CDB for vague infrastructure projects, and a reported USD 6 billion loan from CDB for the cancelled Moscow-Kazan high speed rail line. These serve to inflate the peak of BRI lending in 2016, amplifying the apparent drop in 2019. To be sure, the authors of the BU database are clear that their data represent loan commitments, not actual disbursements, but unsystematic distortions within the dataset affect the broader view of China’s overseas lending, as well as the ability to draw meaningful comparisons between years within the dataset.

[12] Because much of China’s overseas lending goes to support China’s outbound construction activity, we consider MOFCOM’s estimates for overseas contract a functional (though imperfect) proxy.