After months of fraught negotiations with the Trump administration over its proposed rollback of Corporate Average Fuel Economy (CAFE) standards, California has struck out on its own. In a new agreement between California, four of the world’s largest automakers voluntarily agreed to implement annual fuel economy improvements across their entire fleets. Together these automakers, Ford, Honda, BMW and Volkswagen, account for about 30% of new cars and light trucks sold in the US. We model the impact of the new deal on average fuel economy, US oil consumption and greenhouse gas (GHG) emissions, and find it fares modestly better than the EPA’s proposed freeze of CAFE standards at 2020 levels. The deal could offer regulatory certainty for additional automakers looking to lock in their long-term product plans after months of uncertainty. If more companies sign on, the impact of the California deal could rival those of the Obama-era standards, and greatly weaken the Trump administration’s hand.

In late July, Ford, Honda, BMW and Volkswagen, struck a deal with California to increase the fuel economy of their new vehicle fleets through 2026, bucking the Trump administration’s proposed rollback of Obama-era CAFE standards. The rollback, expected to be finalized this summer, would freeze standards at 2020 levels and challenge California’s authority to impose its own, more stringent standards. California has led the opposition to these moves, and many automakers have voiced concern that regulatory uncertainty around the fate of standards could hurt their bottom line. After the administration broke off its talks with California regulators late last year, the state took matters into its own hands.

In the new deal, California and the four manufacturers agree on a 3.7% average annual increase in fuel economy from 2022 to 2026. About a percentage point lower than the gains expected under the Obama standards, this puts the automakers on track to achieve the fleetwide fuel economy anticipated in 2025 under the original rules one year later. The four participating automakers can offset about a quarter of this improvement by incorporating cleaner technologies in vehicle design or by selling electric vehicles (EVs). Credits for EVs established under the Obama-era rules and schedule to phase down by 2021 would extend through 2026 under California’s deal.

While some have criticized the terms as offering too many loopholes to automakers, others see the deal as a much-needed compromise after months of tense deliberations. Together, the four participating automakers make up about a third of the US car market. Their voluntary actions could meaningfully offset the impacts of a nationwide freeze and strengthen California’s case in its ongoing fight with the Trump administration over the rollback. A group of 30 senators from states that have declared their intent to slash transportation emissions this week sent letters urging additional automakers to join California’s terms.

To put the California deal in context, we first revisit our estimated impact of the proposed CAFE rollback under a series of oil price scenarios. This time around, we consider impacts under a range of likely oil prices consistent with our Taking Stock 2019 projections. Our analysis captures, in 2018 dollars, a wide range of potential oil prices—from today’s prices of around $50 a barrel West Texas Intermediate Crude Oil Prices (WTI) to the past decade’s high of nearly $100 a barrel.

To see how the California deal compares, we assume that the four automakers meet fuel economy improvements mandated by the California deal, and that the extended EV credits apply. The remaining companies adhere to Trump’s proposed lower standards. In this split market, we estimate that fleetwide average rises to 39 to 41 mpg in 2025, and 42 to 45 mpg by 2030. 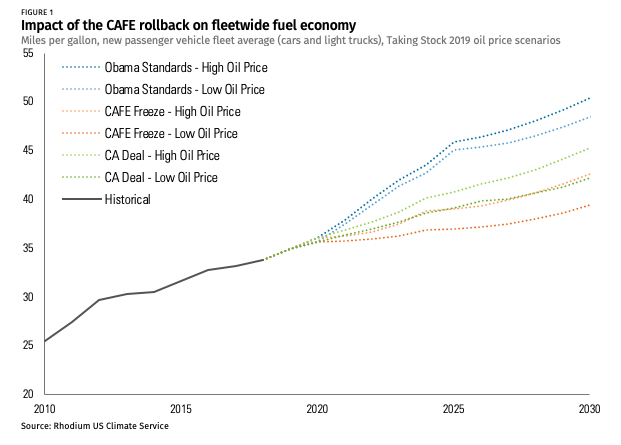 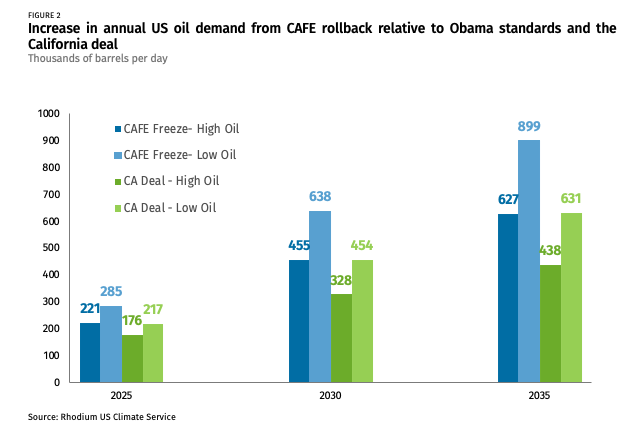 California has called their deal an olive branch to the administration and sees the plan as a blueprint for a national standard. Regardless of whether the federal government ultimately changes course, California’s Governor Gavin Newson is “very confident” that other companies will sign on to the voluntary agreement. We estimate that the deal, as it stands today, could reduce emissions by 184 to 266 million metric tons (MMTs) cumulatively from 2021 to 2035 relative to Trump’s pending rollback. If all automakers who sell in the US market were to join, cumulative reductions would jump to 557 to 807 MMT over the same timeframe. This would put the expanded deal on par with reductions we would expect to see if Obama-era rules were re-instated.

California has already spent months embroiled in back-room negotiations and litigation, and the fight over Trump’s pending rollbacks of CAFE and other policies is far from over. If it scales, California’s deal with automakers points to a potential new way to sustain momentum on clean transportation that cuts the Trump administration out of the equation. Beyond improving fuel economy, California aims to scale up electric vehicle penetration and is currently considering banning internal combustion engines entirely. The state has just proven it has sizable leverage to push policy forward. Automakers, looking for regulatory certainty and policy support for their growing electric vehicle investments, may prove a willing partner. 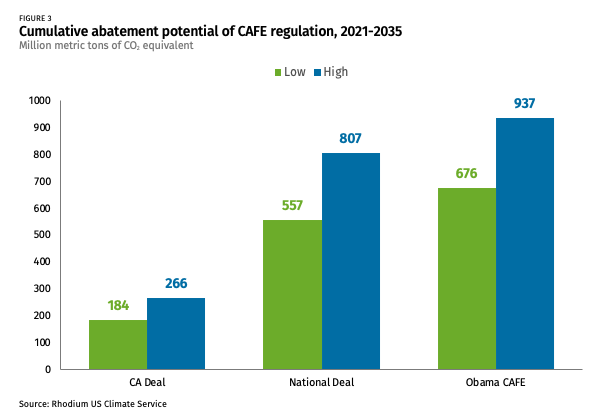 [1] We use Taking Stock 2019 central electric vehicle battery cost assumptions in this analysis.