Expanding the Reach of a Carbon Tax: Emissions Impacts of Pricing Combined with Additional Climate Actions

Putting a price on carbon dioxide (CO2) emissions can help governments reduce them rapidly and in a cost-effective manner. While 10 carbon tax bills have been proposed in the 116th US Congress, carbon prices alone are not enough to reach net-zero emissions by midcentury. Additional policies are needed to complement an economy-wide carbon tax and further cut CO2 from the US energy system.

This study aims to provide a better understanding of such policy combinations. It projects the energy CO2 emissions impacts of two carbon taxes, starting in 2021, that span the rates in the carbon tax bills in Congress. The “low” tax scenario starts at $30 per ton in 2021 and rises at 5 percent plus inflation per year, reaching $44 by 2030, while the “high” carbon tax starts at $15 per ton and rises $15 per year, reaching $150 by 2030. The paper then describes the barriers inhibiting emissions reductions beyond those achieved by the carbon taxes alone for each major sector: electricity, transportation, buildings, and industry. Finally, it explores the energy system changes needed to overcome those barriers and the policy interventions that could deliver those changes. For certain key energy system changes, it provides quantitative estimates of emissions reductions incremental to the two carbon taxes.

This paper is part of a joint effort by Columbia University’s Center on Global Energy Policy (CGEP) and Rhodium Group to help policymakers and other stakeholders understand the important decisions associated with the design of carbon pricing policies and the implications of these decisions. The paper finds the emissions impacts of the low and high carbon taxes alone lead to economy-wide energy CO2 emissions reductions by 2030 of 33 percent and 41 percent, respectively, below 2005 levels. A carbon tax combined with policy actions that support comprehensive, ambitious energy system changes could lead to emissions reductions in the range of 40 to 45 percent, arguably consistent with US midcentury deep decarbonization goals for the energy system.

In addition, the paper finds: 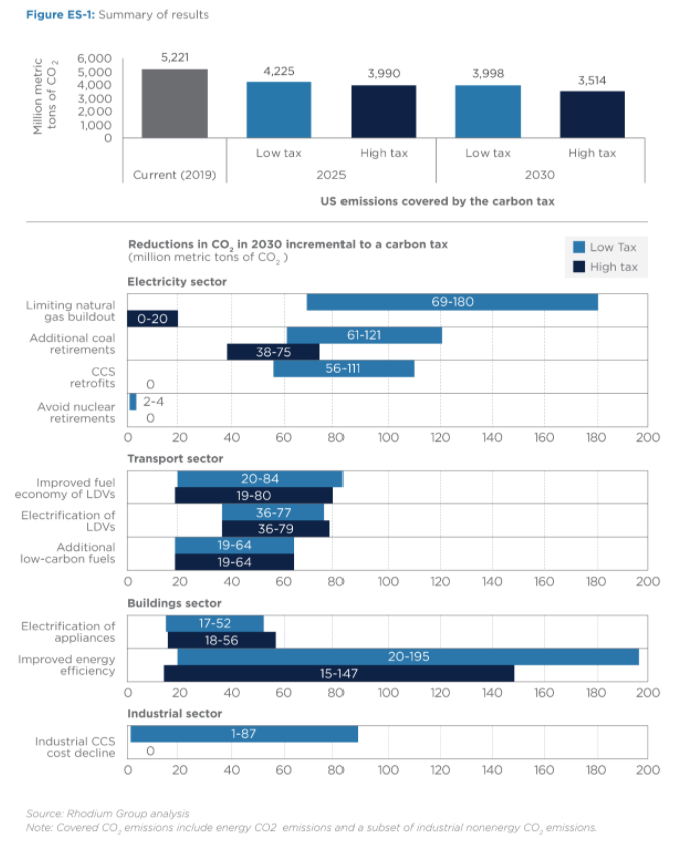