Gigatons at Stake: The Top Five Global Developments to Watch

At the dawn of 2020, countries are considering policies that will set the course of their emissions over the coming decade. If the world is to stay on track to meet the Paris Agreement goal of limiting warming to well below 2° Celsius, we need to reduce annual greenhouse gas emissions anywhere from 15-32 gigatons of CO2 equivalent in 2030. That means reducing today’s levels by around a third in just a decade. It’s clear we’re far off track today, but what could tip the scales in the right direction? The answer to five key questions could have a meaningful, multi-gigaton effect on global emissions by 2030:

1. A European Green Deal? Will the EU President-elect succeed in adopting a 2030 target of 55% below 1990 levels and enshrine the 2050 neutrality plan into law?
2. Will Brazil protect its forests? Will President Bolsonaro continue recent efforts to dismantle the country’s Forest Code prohibiting illegal logging?
3. Can the US get back on track after the 2020 election? Will US voters choose a president committed to achieving net zero emissions by mid-century?
4. A hard or soft landing for the Chinese economy? A slowdown in economic growth is inevitable, but can critical economic reforms keep the slide to a minimum?
5. Will Indian electricity demand grow like China’s? Even if India achieves its ambitious renewable goals, electric demand growth on par with China’s could double India’s power sector emissions by 2030.

Each of our five big questions considers a turning point facing the world’s major economies today and assesses the potential impact of moving in a new direction, whether that’s turning toward more energy-intensive growth in India, electing a new President in the US, or taking action to protect Brazil’s forests. Each of these decisions will have a gigaton or more impact on emissions by 2030. The ranges presented in Figure 1 (below) show the bounds of potential emissions impact if each economy diverges from their current path. In many cases, emissions outcomes under a country’s current path are already uncertain. Where we can measure that uncertainty, we reflect the current path as a range (e.g., current policy outcomes in the US will depend on pending policy decisions and technology costs, and in India it will depend on the level of implementation of Prime Minister Modi’s ambitious renewable and non-fossil goals).

If every economy considered here moves away from their current path, the net effect would be a reduction of around 4 to 8 gigatons of CO2e from currently projected levels for 2030.[1] While a significant contribution to closing the multi-gigaton gap by 2030, it’s nowhere near to where we need to be. In this report, we provide an overview of the scale of emissions reductions needed to keep the world on track to meet the Paris Agreement’s climate goals, and assess the global emissions impact of five big questions facing the world’s largest economies.

Figure 1: Five big questions and the gigatons at stake
Range of potential changes in annual GHG emissions in 2030 (gigatons of CO2 equivalent) 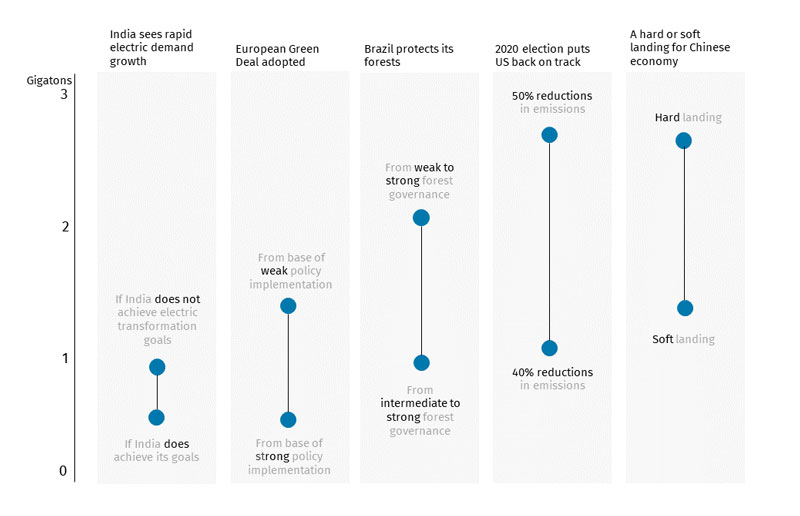