An ocean apart from the US mainland’s electric supply, Hawaii has embarked on an ambitious effort to wean itself off imported fossil fuels. Dependence on oil has been a defining feature of Hawaii’s energy system since before its 1959 statehood. As a result, Hawaii’s electricity prices have been among the highest and most volatile in the nation. Over the past 15 years, the people of Hawaii have paid 260% more for electricity than the US average, while gasoline prices consistently hover close to $1-per-gallon higher.

Hawaii has already begun to usher in a new era of energy independence. It is the only state in the nation with a mandate to reach 100% renewable electricity in place, with a deadline of 2045. The last ten years have seen steady progress toward that goal. In 2008, the Hawaii Clean Energy Initiative, a partnership between the State of Hawaii and the US Department of Energy (DOE), launched with the goal of transforming Hawaii’s energy ecosystem. Innovators in Hawaii, seeking to mitigate climate change and make the state more resilient, have created opportunities for new clean energy technologies and novel business models to thrive in the state.

Elemental Excelerator commissioned Rhodium Group, in partnership with Smart Growth America, to conduct an independent analysis of Hawaii’s clean energy transition. To do this, we leveraged state-of-the-art energy system and economic modeling tools, state and federal datasets, existing literature and nearly 200 hours of interviews and meetings with Hawaii stakeholders and experts. This is not a plan; rather, this report presents a quantitative assessment of accomplishments to date and describes the future potential of clean energy deployment in Hawaii’s electric power sector and on-road transportation.

The Path Ahead: Cheaper to Go Faster

What does the future hold for Hawaii? We find it is cheaper to accelerate the clean energy transition than cruise toward the 2045 renewables targets. After considering a range of energy sector cost projections, we find Hawaii’s most cost-effective pathway would source from 58 to 84% of its electricity from renewable energy by 2030 (Figure ES.1). That could amount to double the mandate of Hawaii’s current Renewable Portfolio Standard, which calls for 40% renewable energy by 2030. Supplying a full 100% of the state’s electricity from renewable sources as early as 2030 would be more expensive than this 58 to 84% range, but cheaper than the current energy mix or current RPS under most oil price and renewable energy cost futures. 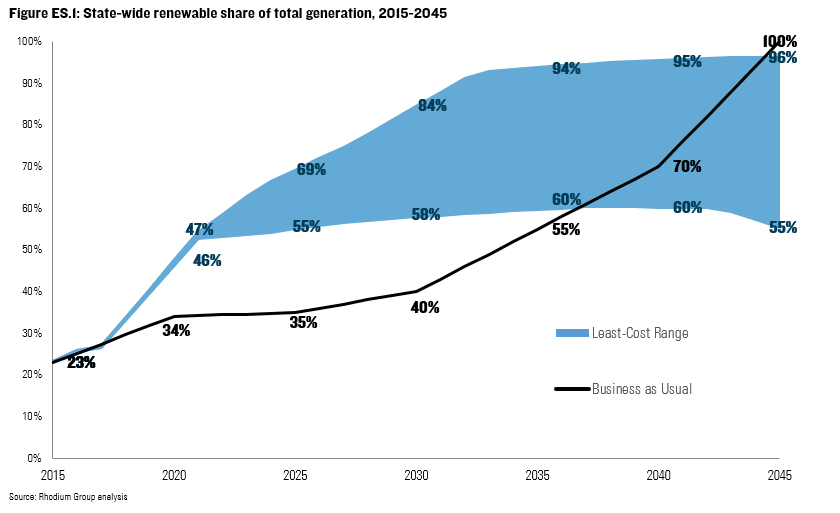 Why is this the case? Innovation and scaled deployment have slashed the cost of renewables so much that they are cheaper than oil in many applications. Recent clean power purchase agreements prices are lower than the price of conventional power plant fuels (Figure ES.2).

Accelerating the clean energy transition will bring real economic and environmental benefits including: 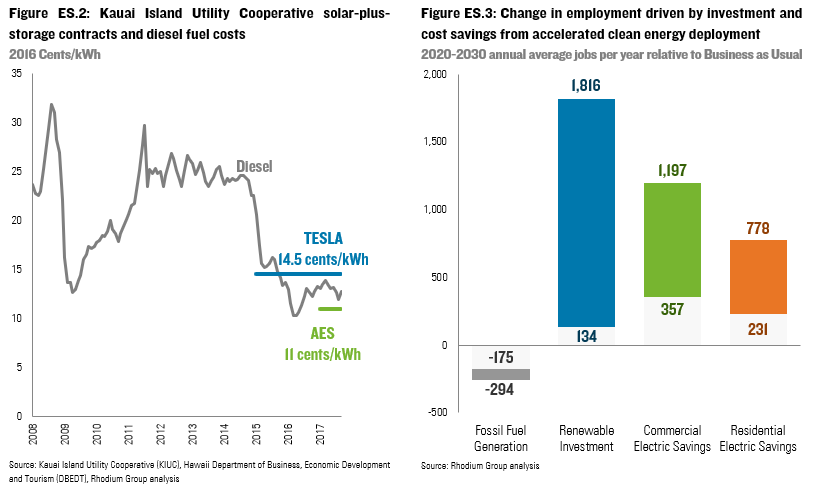 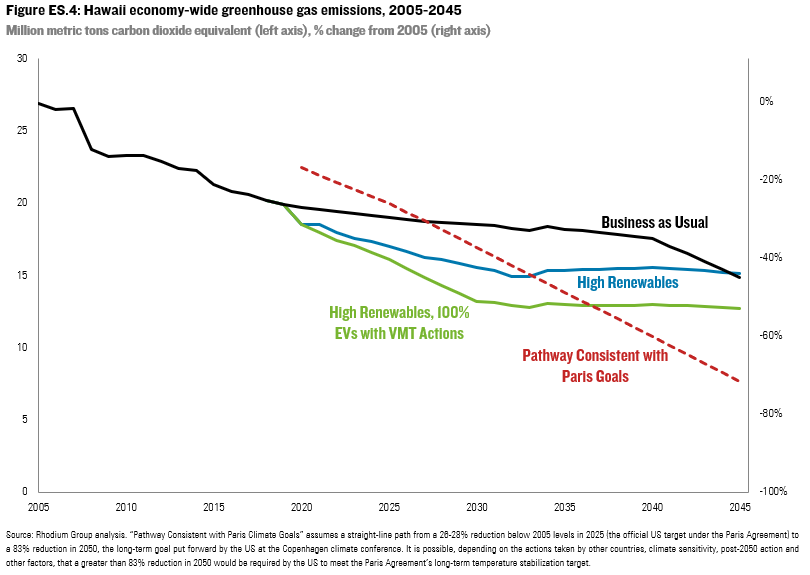 The Road Ahead: Doubling Down on Mobility

The pace of the transportation clean energy transition has been slower than in electric power. While Hawaii has taken steps to expand mobility options across the state, total transportation demand is increasing. Federal standards have helped to keep oil consumption flat despite growth in travel demand. The state ranks second in the nation in electric vehicles per capita fueled in part by state and county incentives and $10,000 rebates offered by Hawaiian Electric. Hawaiian Electric’s Electrification of Transportation roadmap projects that 55% of cars on the road in 2045 will be electric. Last year, each county in Hawaii proclaimed a goal of 100% renewable ground transportation by 2045.

Looking to the future, we find that transportation demand will continue to increase without new efforts to expand mobility and improve the prevalence of dense, mixed-use development. By coupling these actions with accelerated sales of EVs, in line with the county-level proclamation, Hawaii could cut its oil dependence in the ground transportation sector to zero by 2045. This can be achieved while still capturing the benefits of accelerating clean energy in the electric power sector.

Hawaii has a strong track record of setting ambitious goals in electricity and transportation, but to capture the benefits of accelerating the clean energy transition new action by the state, counties, communities, and individuals are required. These actions can improve existing policy frameworks and create new ones that provide certainty for businesses, opportunities for new technologies and incentives to make an accelerated clean energy transition a reality. These actions fall into three categories:

Hawaii is Already Reaping the Rewards of the Clean Energy Transition

Since 2008, clean energy has surged in Hawaii due to falling costs, policy leadership, and innovation. Renewable energy now makes up 25% of all the power generated in Hawaii up from 6% in 2008 (Figure ES.5). Nearly one thousand gigawatt hours of electricity savings have been captured through energy efficiency investments. That is almost enough electricity to power the Big Island for one year. Hawaii committed to accelerate this transition and put the state on track to do its part in meeting long-term US greenhouse gas (GHG) emission reduction goals, with a commitment to achieve 100% renewable energy by 2045. These combined achievements have produced real benefits including: 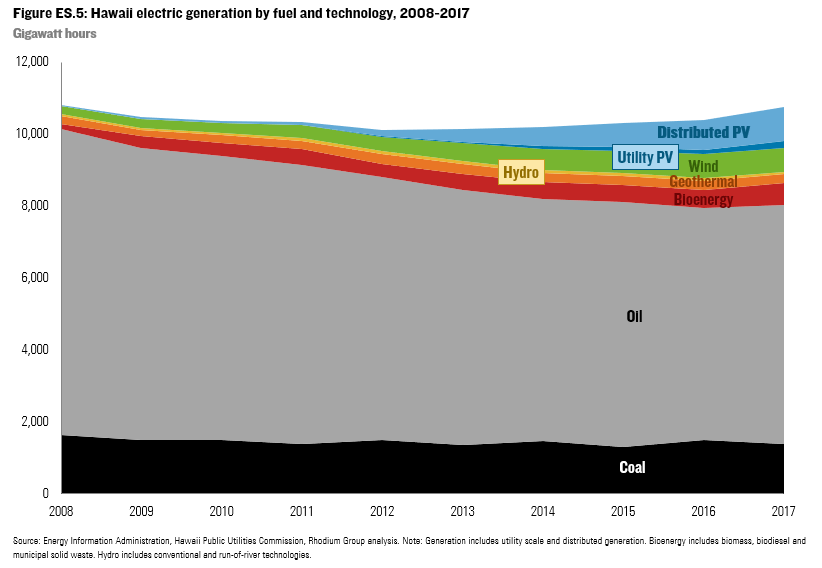