Progress on the Pathway to Paris?

It’s been nearly a year and a half since President Biden entered office and made addressing climate change one of his administration’s top priorities. Pledging to take a whole-of-government approach to the problem, Biden built out a climate team inside the White House and promptly set an ambitious target to reduce US greenhouse gas (GHG) emissions to 50-52% below 2005 levels by 2030. Congress also prioritized addressing climate change, first with key infrastructure investments and then with the House of Representatives passing over $500 billion in climate and clean energy spending through budget reconciliation. In addition, 24 states have adopted the same 2030 target or have comparable targets in place.

Last fall, Rhodium Group published Pathways to Paris, a comprehensive assessment of a portfolio of policy actions that the US can take to put the 2030 climate target within reach. In that report, we found that no single action taken by any single part of the US federal system is sufficient. Instead, joint action consisting of a steady stream of legislation, regulations, and other activities across all levels of government can put the 2030 target within reach. In this note, we revisit the list of actions we considered and assess progress on each. We find that while some movement has occurred on some fronts, most big-ticket items have yet to get started or are still under deliberation in Congress. Without ramped-up action across the board in the very near future, it will be increasingly difficult to envision a pathway to the 2030 target.

When President Biden entered office, he made climate change a top priority, more so than any other president before him. Coming after the Trump administration’s systematic dismantling of climate and clean energy initiatives, the Biden administration has taken hundreds of actions to undo the damage and reverse regulatory rollbacks. The high-caliber appointments of Gina McCarthy and John Kerry as the first-ever National Climate Advisor and Special Presidential Envoy for Climate, respectively, sent a strong signal that the President was taking the climate challenge seriously. With unified government, there was hope of ambitious and swift congressional action on investments in decarbonization.

Now, nearly 18 months in, the administration has set ambitious goals on everything from offshore wind deployment to ramping up electric vehicle sales, cutting global methane emissions, and achieving a 100% clean electricity grid. Regulatory actions to rein in greenhouse gasses are moving forward in a few key sectors. Congress passed the Infrastructure Investment and Jobs Act (IIJA) which contained several multi-billion dollar investments in emerging clean technologies and clean infrastructure. The administration has also taken key steps to help achieve long-term decarbonization goals, including standing up a Buy Clean Task Force to use the federal government’s purchasing power to help clean up heavy industry, and committing the federal government to increased sustainability targets. Critically, the administration has emphasized environmental justice across agencies and started initiatives to address disproportionate climate and environmental impacts in disadvantaged communities.

Subnational actions also have the potential to accelerate and amplify emission reductions catalyzed by federal actions and, in some instances, deliver tons that the federal government can’t easily reach. States have kept a steady drumbeat setting ambitious climate targets to help do their part to achieve climate targets, especially during the federal inaction of the Trump administration. And we’ve seen several states step up climate action in key sectors in recent months as well.

However, at the same time, the $555 billion in climate spending in the Build Back Better Act (BBBA) that passed the House in November remains in Senate deliberation limbo. Congress, states and the White House aren’t tackling climate change in a vacuum but instead are dealing with a host of other challenges. The country is in the midst of the ongoing pandemic, once-in-a-generation inflation, sky-high energy prices, a war in Europe, and ongoing supply chain disruptions—all of which at best distract from additional climate action and at worst may lead to actions that could run counter to long-term climate goals.

In Pathways to Paris, we found that without any new climate action, the US is not on track to meet its 2030 target of reducing emissions 50-52% below 2005 levels. With no additional action, emissions stay roughly flat, getting to 17-25% below 2005 levels in 2030 (reflecting the uncertainty around energy prices, technology costs, and carbon removal from natural and working lands). This leaves an emissions gap of 1.7-2.3 billion metric tons between current policy and the 2030 target. To fill that gap, we developed a “joint action” scenario— congressional passage of the IIJA and BBBA, alongside regulations and other executive branch actions and supplemented with subnational action in climate-leader states. All together, this scenario would achieve an emission reduction of 45-51% below 2005 levels—putting the 2030 target of a 50-52% reduction within reach. 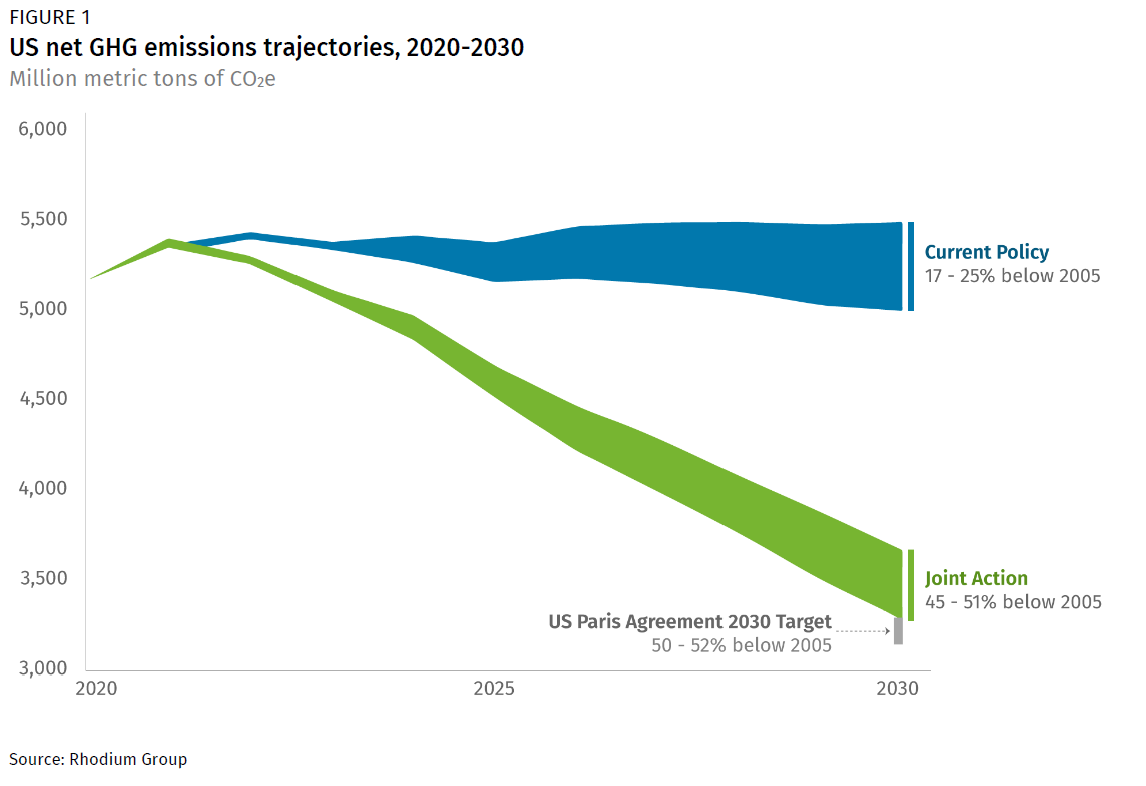 Following through on the joint action scenario does more than get the US in line with its 2030 climate commitment. It also can lead to dramatic cuts in conventional air pollutants from electric power plants and to improvements in public health. A cleaner US energy system can also save the average American household roughly $500/year in energy costs in 2030. Finally, the joint action scenario bolsters energy security for the US and its allies around the world, with oil and liquified natural gas exports increasing by up to 29% and 15%, respectively.

How does the current level of US policy action as of mid-June 2022 compare to what we contemplated in our joint action scenario? Table 1 below breaks down the key components of the joint action scenario. We’ve consolidated some actions for simplicity and in line with how they may work in tandem during implementation. Overlap is a natural consequence of our federal system. For example, ramped-up state clean energy standard targets and federal regulations on GHG emissions from new and existing power plants overlap in both targeting emission reductions from the power sector. But this overlap is a feature, not a bug, as a suite of policies targeting emissions from the same sector can provide important insurance against the sorts of policy risks we discussed in our Pathways to Paris report, including unfavorable judicial review and other implementation challenges. Overlapping policies are also sometimes greater than the sum of their parts, both in terms of overall effectiveness and consumer costs.

In Table 1, we’ve marked actions by estimates of the magnitude of emission reductions to help give a sense of which actions contribute more than others to meeting the 2030 climate target. Due to interactive effects between actions, the emissions estimates in Table 1 are not additive, but they give a sense of relative impact on closing the emissions gap. We’ve also marked them by their current status. Some policies are in the implementation phase, while others are in legislative limbo or have seen no action at all. In a third tranche of actions, we have seen some progress, ranging from modest preliminary steps to published regulatory proposals, but in all cases additional progress is required to achieve the reductions we included in our joint action scenario. For more details on components of the joint action scenario, please refer to the Pathways to Paris full report and the technical appendix.

A review of the status of all the building blocks of the joint action scenario reveals that there are several actions in the implementation phase, though nearly all of these have a small impact (less than 10 million metric tons of CO2-e each) on US emissions in 2030. These actions are all associated with the IIJA and focus on carbon capture demonstrations, orphan mine and well remediation, energy efficiency in buildings, supporting existing nuclear plants through 2026, and electric vehicle charging infrastructure. All of these investments are important for solving climate change, but they have a small impact on 2030 emissions for a variety of reasons. Some programs expire well before 2030, such as nuclear support. Some investments, such as those in building efficiency, aren’t large enough to substantively move the emissions needle—though they often provide other important co-benefits beyond near-term emissions reductions. Finally, investments in early-stage deployment of emerging clean technologies help reduce the cost of these critical technologies. It takes time for these technologies to get to commercial scale, so they don’t deliver a lot of tons by 2030. However, they do create more opportunities for deeper decarbonization in the long run.

There are important actions that are in the proposal stage where the regulator, usually the Environmental Protection Agency (EPA) or Department of Energy (DOE) has proposed a regulation and is seeking comment before finalizing. Within the “in progress” category, one of the most important proposals from an emissions impact perspective is the regulations on methane emissions from the oil and gas sector. Some appliance standards and standards on medium-duty and heavy-duty vehicles (MDVs and HDVs) are also in the proposal stage but have a smaller impact.

Several other policies are earlier in the adoption process. EPA has published a white paper supporting regulations on CO2 from power plants but may be waiting on the pending Supreme Court decision in West Virginia vs. EPA, expected later this month, to provide some clarity on how EPA can use the Clean Air Act to regulate existing stationary sources of CO2. Likewise, small actions in a handful of states have occurred that can help the US make progress, but these actions are not widespread enough to reach parity with what we considered in our joint action scenario. Indeed, a few states have adopted ramped-up clean electric targets and clean vehicle standards, but not to the extent we modeled in Pathways to Paris.

Some of the actions with the largest potential impact on 2030 emissions either have an uncertain fate or there has been no action at all to date. For example, the climate investments contained in the BBBA have been in legislative limbo for months and, despite ongoing rumors that a deal may be possible, there is no clarity on the fate of the package or something like it at the time of publication. Meanwhile, EPA has taken no action on regulating CO2 from new and existing industrial sources. We also have seen no action from the Commodities Credit Corporation to procure multi-megaton-scale carbon removal from investments in natural and working lands. In addition, no states have acted on agricultural emissions, something that could add up to 50-100 million tons of reduced emissions if all leadership states were to take them on promptly. 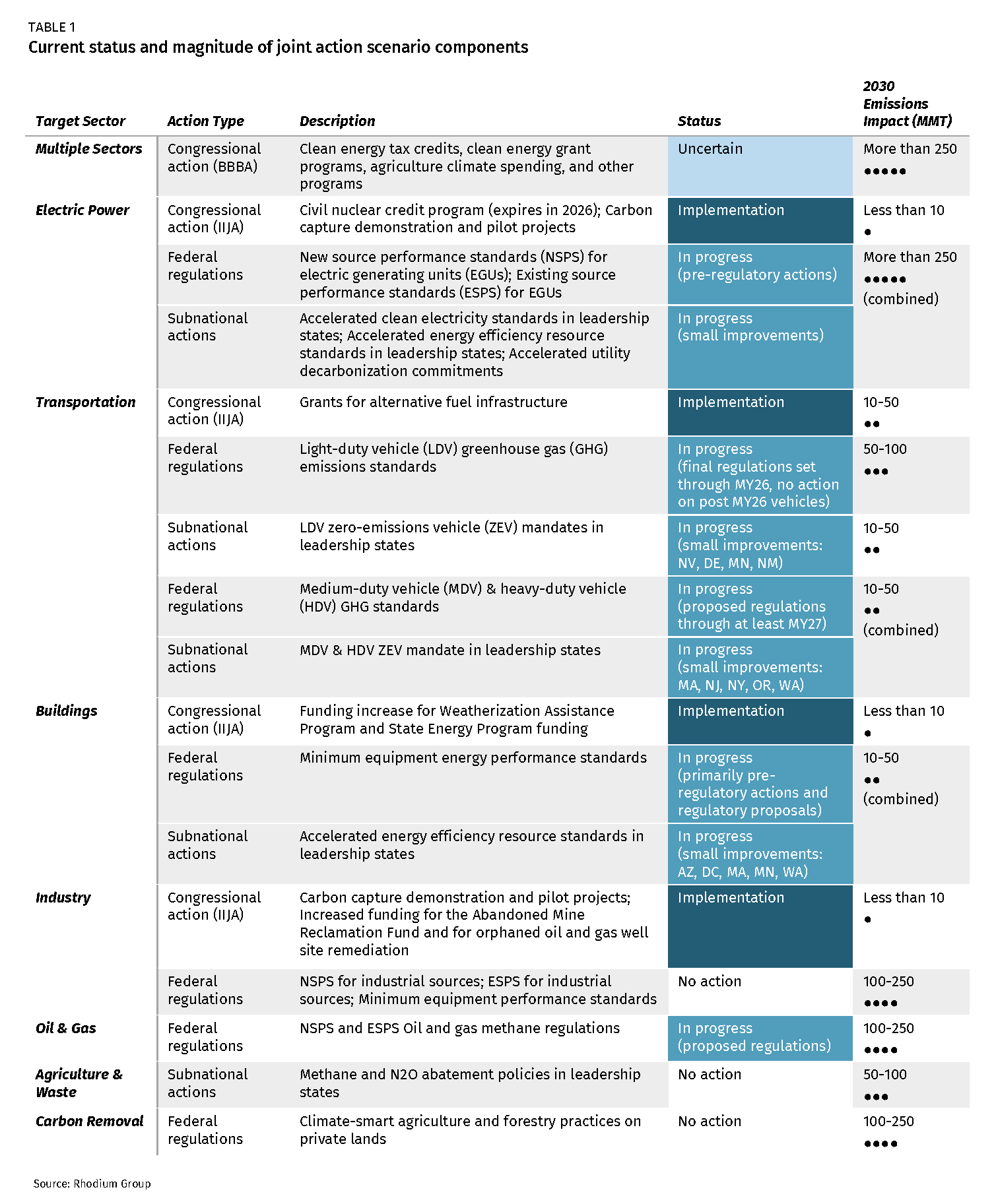 The clock is ticking

It’s clear that a lot more needs to happen if the US is going to get on track to achieving the 2030 climate target. New regulations proposed this year have a good chance of being finalized outside the Congressional Review Act window, limiting the power of potential future anti-climate presidents and congresses. In addition, it takes time, often more than a year, for rules to be finalized, take effect, and be fully implemented. Given that 2030 is less than eight years away, the sooner policies are finalized, the sooner they can have an impact on reducing emissions.

Action this year on multiple fronts by Congress, the Biden administration, and states are needed to accelerate progress towards closing the emissions gap. Without action, it will be increasingly difficult to see a reasonable path to the 2030 climate target.

Pathways to Paris: A Policy Assessment of the 2030 US Climate Target, published October 2021

Has the Supreme Court Blocked the Path to the 2030 Climate Target?, published July 2022 after the West Virginia v. EPA ruling